i haven't been very active in creating content about our guild and our brawl results
maybe i was way too lazy to sit down and get a summary of our performance each time
after being a member of PIZZA 1-THE STUFFED CRUST guild for more than a year, actually i have been recruited as a soldier at its inception , i decided that i must help my family grow through posting our brawls as well 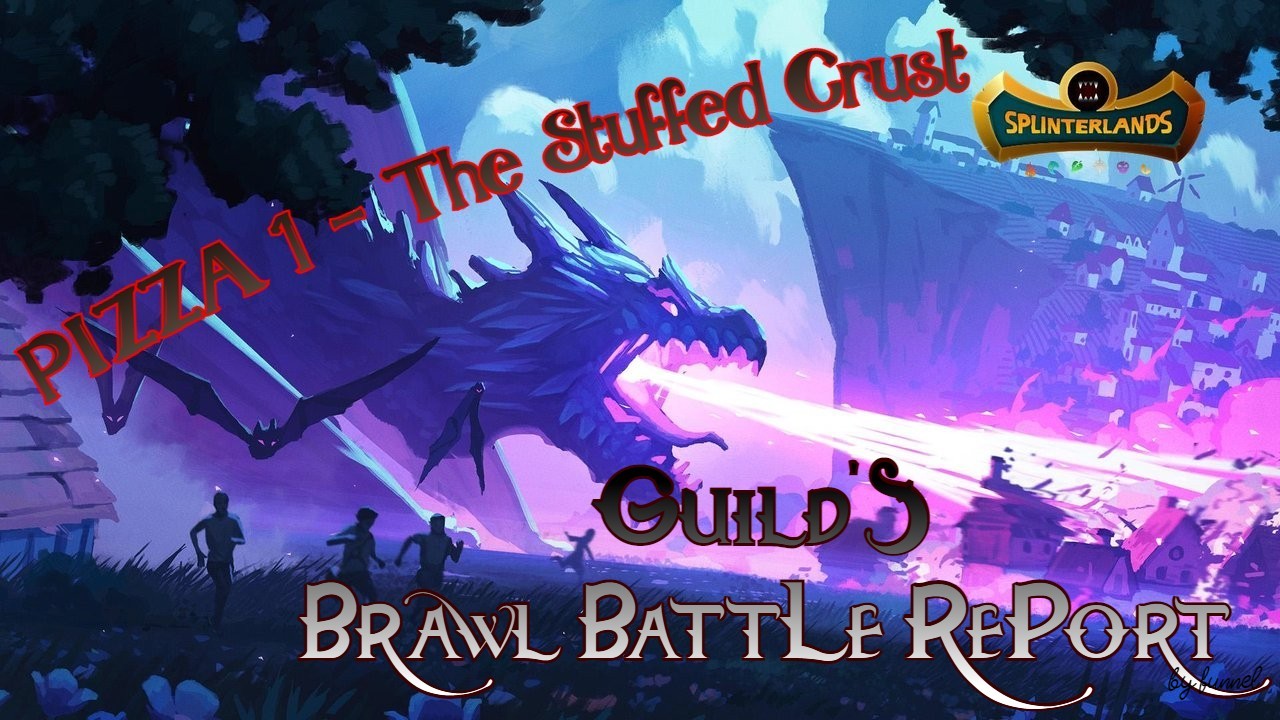 the truth is that after we upgraded our Guild to tier 2 ,we face some difficulties in battling our opponents
as long as we were competing in tier 1 ,we were getting 9 times out of 10 the first place but in tier 2 things are different and more difficult
of course we lost some very good players for various reasons, but on the other hand we got some other on board to make it even

anyway my intention is PIZZA 1 Guild to stay competitive and every time a rival-player sees PIZZAs on his screen to think twice on how to develop his team
i must also say that we have other Guilds in which we recruit players who does not have the experience needed to get to PIZZA 1, but they can join our party and when they become experienced enough they can jump to the crown guild PIZZA1
(this is how the whole operation started ,today is bit different)
don't forget that all PIZZA guilds ( 6 in total ) are under the wing of the HIVE PIZZA community so there are indeed plenty of reasons to join us except battling

now enough with talking lets get to the latest Brawl results
as mentioned above we play in tier 2 at the moment and this last brawl, i consider it a success

we managed to finished at the 3rd position, which is pretty nice for our level of combat considering our Flaws as a team
i wish we will continue improving ourselves and i believe now is the right moment to do that cause SPS brawl rewards are above us 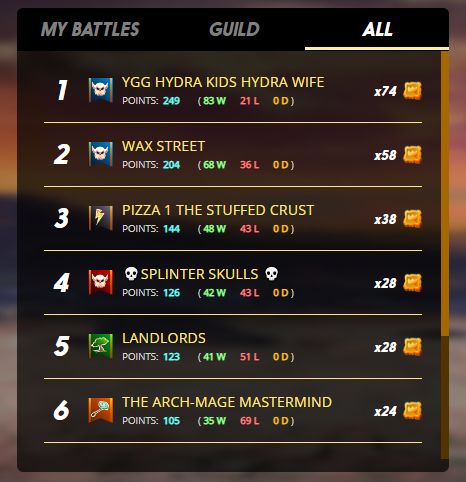 i don't wanna think high of myself but i do believe that i am one of the best players in our team and i also believe that its been too long since i was really pushing things around by being really active
this must change for sure
back in the day when we started as a guild , before even the sub-Guilds were created , there was a lot of movement in our 'TAVERN' ..i miss those days

anyway in this specific brawl my performance was not so good at least to my expectations
since some time ago my leaders decided that it was better for the Guild to go fight in a GOLD FOIL fray
i was battling in a bronze -regular fray sometimes in silver -regular..my deck though was never at the maximum level of each league , most of my cards are NOVICE but no matter what i can compete even with a weaker deck and bring home some pretty good results

in the GOLD FOIL fray though it is a different story cause it's not only the level of the cards i miss, it is also the variety of the cards that i don't have in order to get to fight
of course my GUILD is very supportive and does its best in order to help me with delegations etc and i do THANK all of them for this support

as i said my performance was not so good
my result was 4 wins ,2 defeats which is not acceptable from my side
in 6 battles i'm willing to excuse 1 defeat but 2 of them ...well this is not a good result
obviously i made some mistakes , i don't wanna make excuses about misfortunes ,lack of cards etc etc , i stand where i stand , i have to defend my ground and my guild with the weapons i posses so there are no excuses to be made when things don't go as expected
i'll try to be better next time 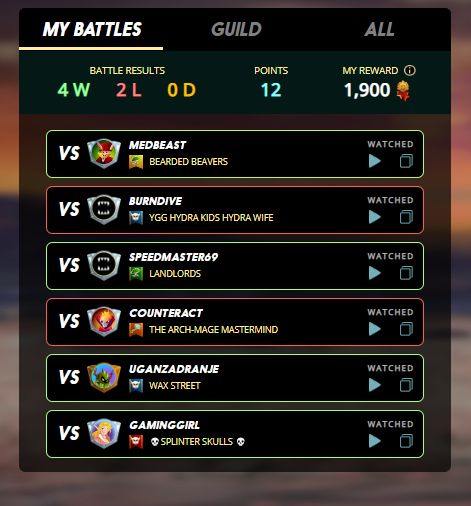 let me display my 6 battles and get an idea

this was a victory, i played the Obsidian and i believe Goblin Psychic and Wood Nymph were the true heroes of this battle...my opponent had a Gladiator on his team but didn't work out as expected of course to my favor ! 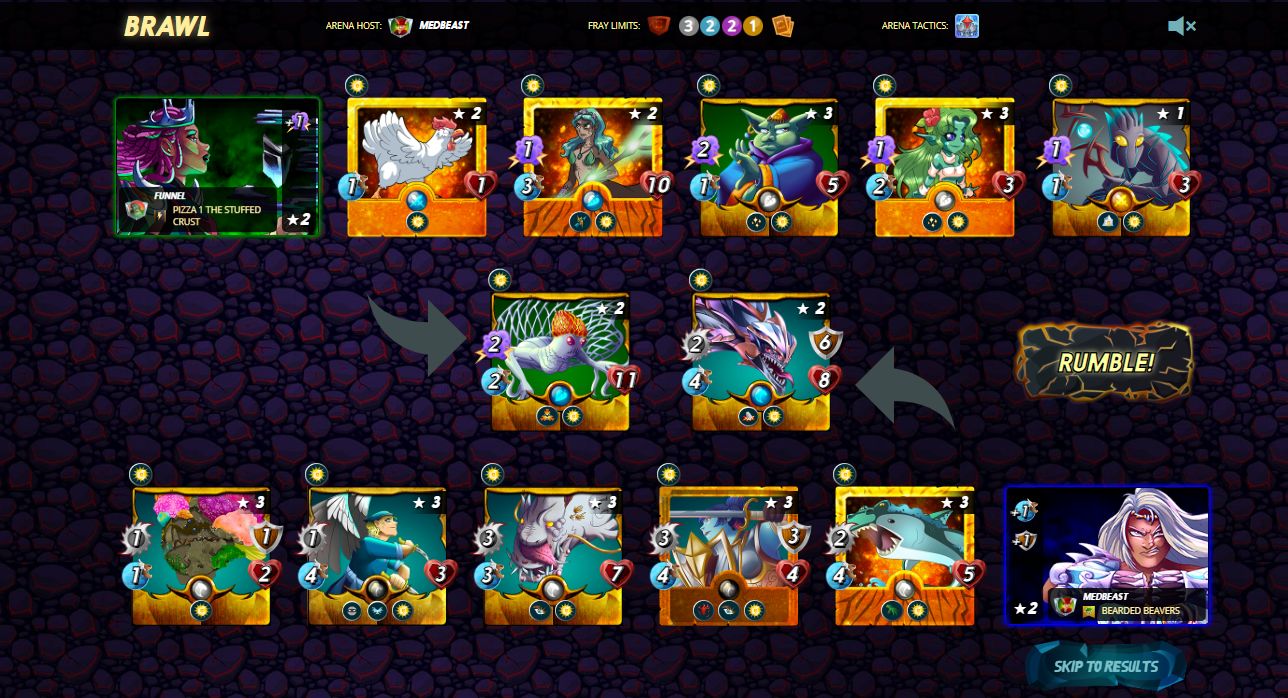 this battle didn't go as i was expecting...i made mistakes, i knew i made mistakes from the time i submitted the battle , of course my rival's Summoner did all the work but as i said above this is not an excuse..i should have created a better combination with my monsters 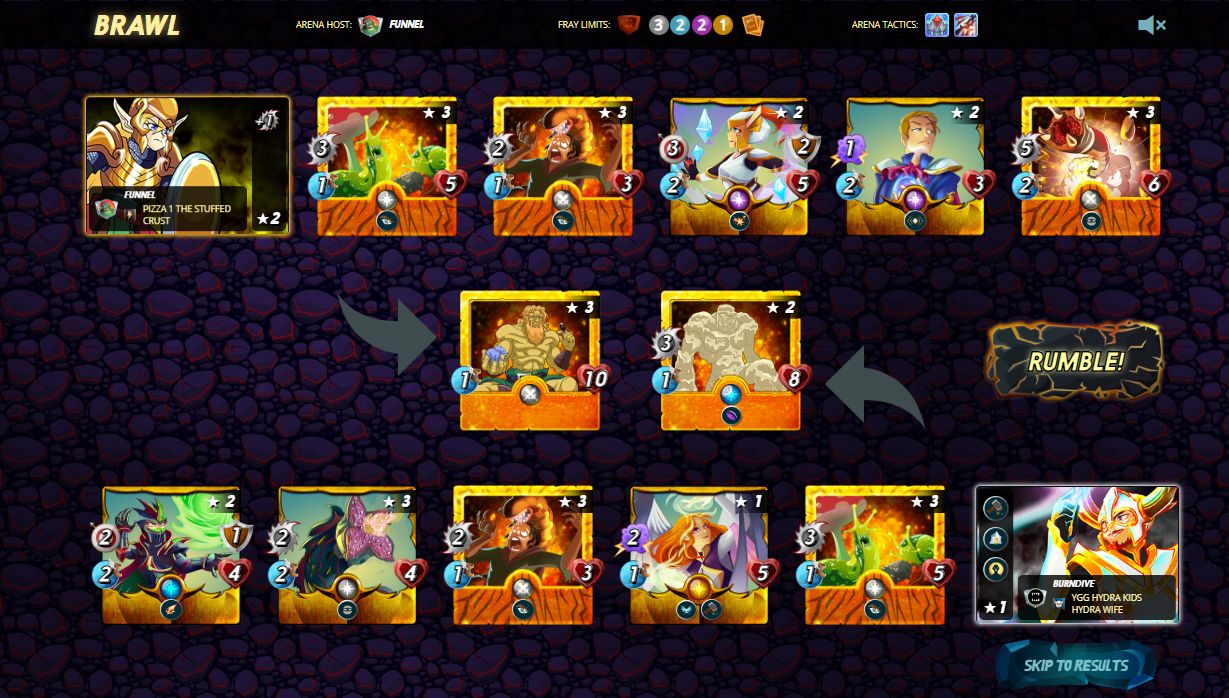 huge success in this one, i had better monster development,very smart move to get Rotwell as a Summoner...my Twisted Jester did his job leaving no chance to the opponent which had a very very bad team..most probably i believe he just didn't have better cards to choose from so he did the best he could 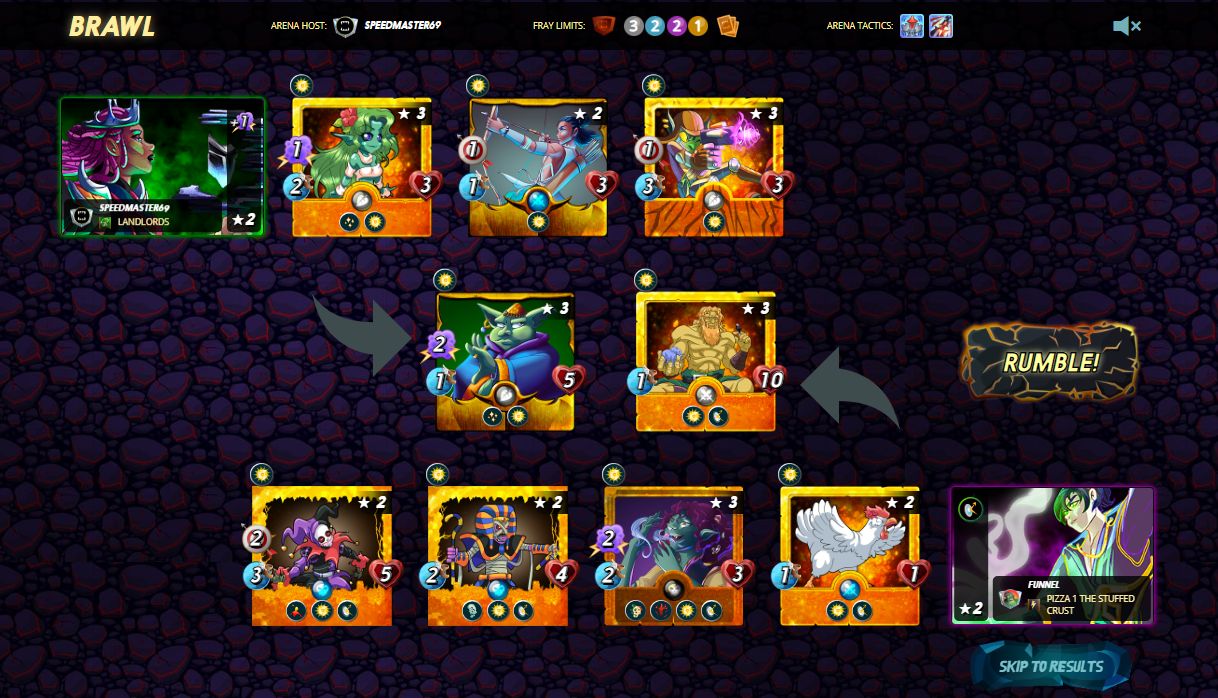 absolute destruction..when i say mistakes this battle is exactly what i mean...this battle is a mistake..i didn't take into consideration the POISON rule and i got what i deserved to get ..fool of me ,when i saw my rival's team i thought this was an easy one...fool of me! 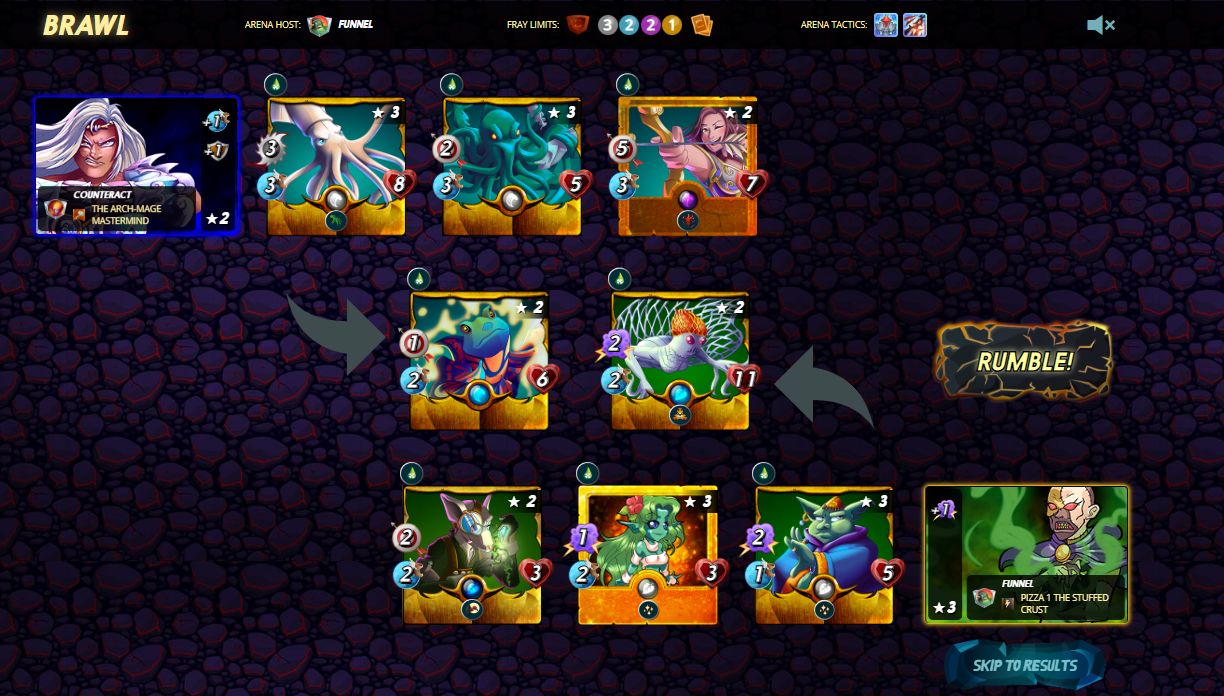 this is a very interesting battle, when i first saw my opponent's lay out i admit i was intimidated by his Quora lvl 2..i said ok end of story lets go to the next fight but my team was very well structured and with the help of Nightwind gave me the victory
i believe though that the actual heroes of the battle were my 2 assassins Sha-Vi and the Undead Badger
very nice battle 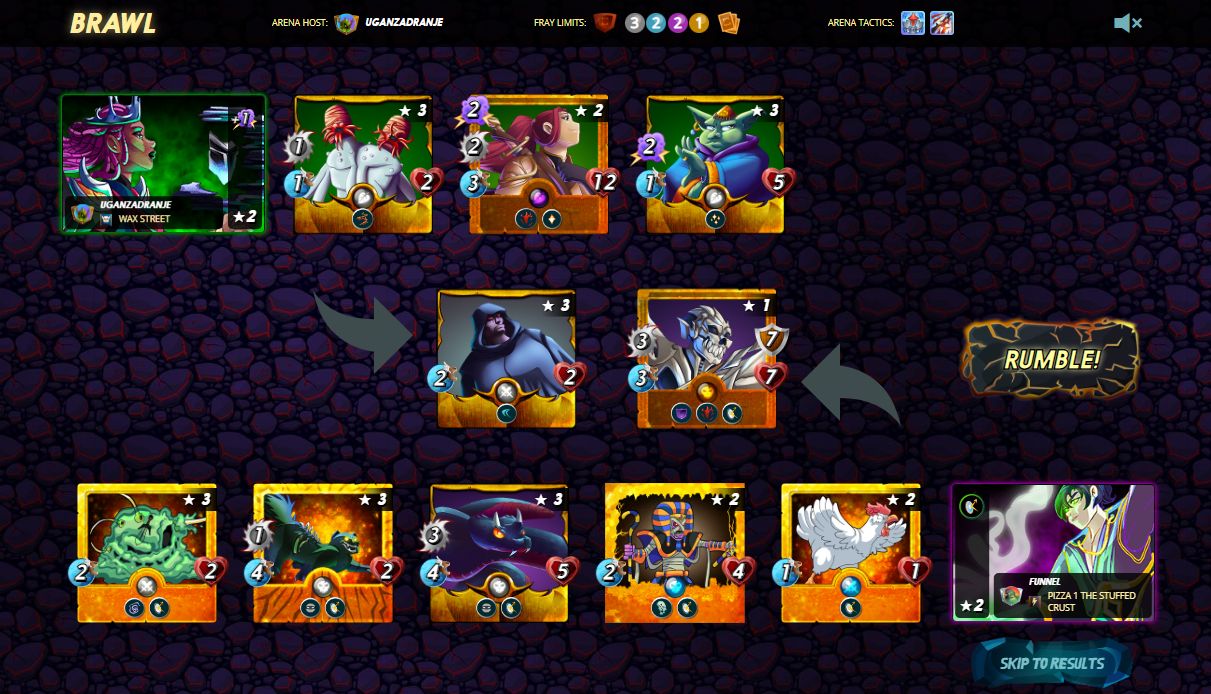 last battle for this brawl, victorious for me, the rival team was not so strong my lay out was better no chance to loose this one 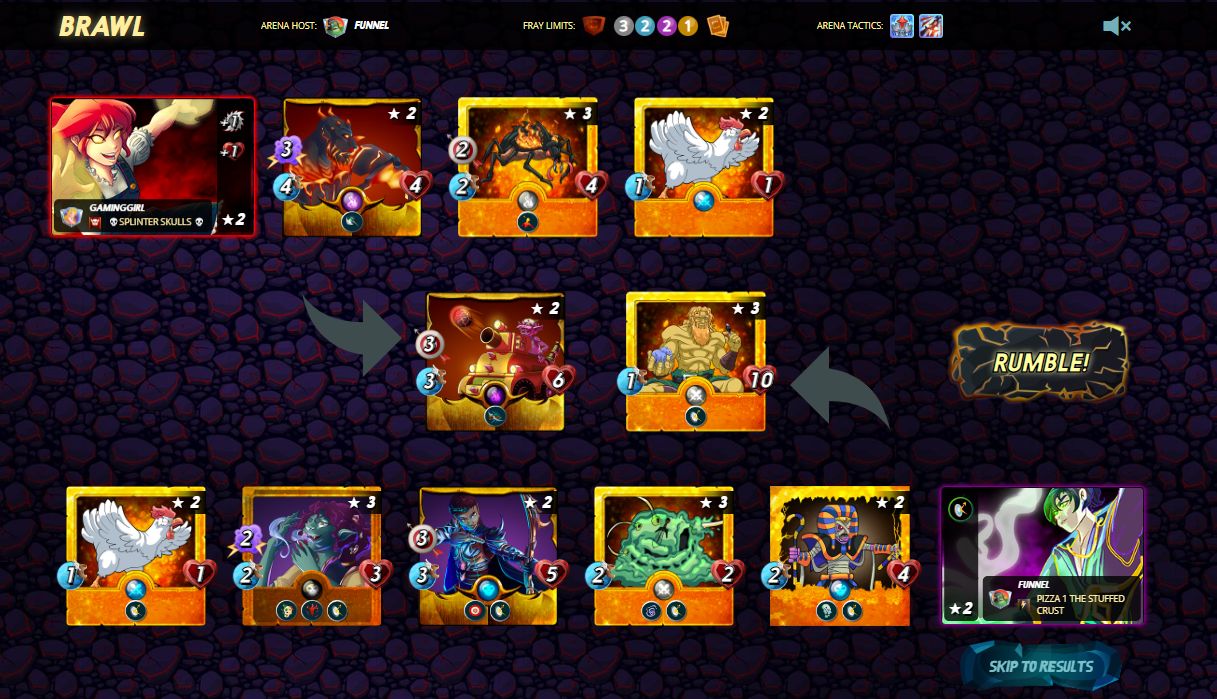 that was it for today !!
i'm not happy with my result but i'm quite satisfied with my Guild's 3rd place and the 1900 MERITS we got as reward
go PIZZA'S go !

Thank you for taking up the GF fray for the !PIZZA Guild.

We all make some mistakes when we brawl, but the most important thing is we learn from them. It seems to me, you've got a great understanding of you mistakes, which is great!