This is a short sum-up table with the state of my goals in easier TLTR form. The table has only some information, so if you want details, they can be found in the post.

Decisions, decisions... It was an important week for making decisions.

Most of my goals could have been impacted by decisions taken during this week. First, there are the presales from Splinterlands for Riftwatchers and the Splinterlands Tower Defense Game, and my decisions regarding that.

Then the market made a local bottom near 50 cents per HIVE this week. 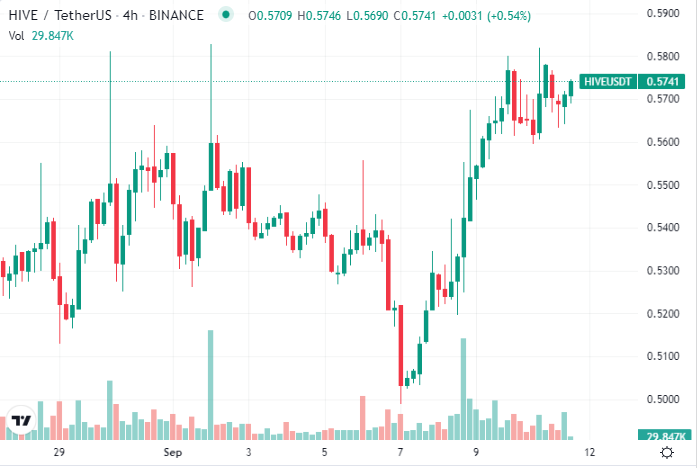 Had I been more inspired, I would have bought more HIVE at those levels. But nope, I wasn't. Only a little bit more. I expected September to be bloodier, from the way it started but looks like Microstrategy has other plans and that news pumped the market.

I added 142 HP this week, most of it organically. I also moved part of my liquid HIVE and HBD to the CubFinance farm, earning some CUB rewards (which I compound in the same liquidity pool), instead of nothing on the base layer, as liquid tokens. I didn't move all the tokens, as sometimes when pumps or dumps happen, speed is of the essence, especially if you discover them late.

I stopped this goal in favor of HIVE Power. Initially, the goal was to reach 5000 HBD in savings by the year-end, starting from almost nothing.

This week I only added 49 LEO to my stake, with more liquid LEO waiting for the LPUD. That's 2450 LEO more than when I started tracking this goal, 12 weeks ago.

122 LEO per week are currently needed to complete this goal by the year-end. I might increase this target if I get there too soon. We'll see when we get there.

The SPS staking goal is COMPLETED!

However, the new SPS rewards from ranked battles come in a staked form and will keep increasing the stake.

Announcements from the team made me realize the more SPS the better, even above my goal. So I stopped using it to buy CL cards.

I won't stake it though (for now). Besides what comes staked from the gameplay, SPS goes to the diesel pools.

The overall situation, to better gauge my progress, because I still need to push hard on this goal:

I started the week with 9727 comments.

The 10K target for replies is COMPLETED and I won't increase it.

I have currently made 9850 comments, which means 123 comments this week. This is below the average I need to complete this goal. This was an adjustment week with the new target. Looks like I'll have to do better.

With the new comments target, and 16 weeks left in 2022, I need an average of 135 comments per week to reach the goal.

Does this count towards your goal 😎

Not sure what you're asking here.

You will certainly get there. Delayed gratification always pays off. The one that comes as passive income has a greater impact and the good part is that you are nicely building up your staked capital, which means that is broad money, that in turn produces some passive returns. I wish you all the best.

Interesting, I haven't thought of it that way about the presales. But that's another point toward being the right decision, all things considered.

The one that comes as passive income has a greater impact and the good part is that you are nicely building up your staked capital, which means that is broad money, that in turn produces some passive returns.

Indeed, both the staked tokens and the LPs will start generating a decent and continuous flow of passive income.

Great work on your goals!! That 25k is getting closer.

I am relentless about it. One way or another, I'll hit that goal. :)

Awesome goals, and even more awesome progress on getting there!
I like the way you scrapped the HBD goal, I should do that too.
Interesting to see the Splinterlands goals, I do play from time to time, but all this has gone way over my head!

I like the way you scrapped the HBD goal, I should do that too.

To me, it seemed like the only logical decision. Either remove it and focus on HP or miss both for sure. This way I may have a chance on HP. Plus, when HIVE is below $1, you earn more by setting your posts to 100% HP, instead of 50/50%. So, I did that and stopped accumulating HBD. Of course, I'm interested in HBD and I want more of it, but now wasn't the best time to keep pushing for it, despite the 20% interest.

I also moved part of my liquid HIVE and HBD to the CubFinance farm, earning some CUB rewards (which I compound in the same liquidity pool), instead of nothing on the base layer, as liquid tokens.

As the APR is better there, maybe it will earn you more HIVE for your HivePower goal... If you plan to convert CUB back to HIVE... ;) I'm doing something similar inside dieselpools and accumulating HIVE in that way too...

Have a more prosperous week ahead!

Thanks, man! Yep, that's the plan, to grow the HIVE stash quicker wherever it is. I'll keep compounding with CUB rewards, of course. Just not too often, to not spend too much on fees.

Nice work! You did pretty well!

You are one of the ones I keep checking on to add to my own Hive goals inspiration.

You're gonna hit that LEO goal before you know it!

It doesn't compound as fast this way, but sometimes I take my CUB earned from the bHBD-bHIVE pool and convert to LEO to give my LEO stacking a little kick. Then I go back to compounding the LP in pool :-)

It doesn't compound as fast this way, but sometimes I take my CUB earned from the bHBD-bHIVE pool and convert to LEO to give my LEO stacking a little kick. Then I go back to compounding the LP in pool :-)

My HIVE Power goal is the one harder to achieve, so I don't do that. Just compounding into the LP. I'll hit the LEO goal for sure, probably before the year-end, and without pushing more external funds to it.

That's probably the way to go then :-)

It is for me. But it is different from case to case.

Great to know how to get passive income. Thanks for sharing.

I'm glad you found something new.

It is always difficult when it comes to these decisions. Just when you think you have your goals on track, something new is brought into the spectrum.

Normally, the Splinterlands decisions should help me toward my goals. About the buying the dip thing, not sure. In the grander scheme of things, it may not even count. At the weekly level, the price difference was important.

Congratulations @gadrian! You have completed the following achievement on the Hive blockchain and have been rewarded with new badge(s):

Great goals and flexible solutions! It's very important to be flexible when moving up. I often forget this and bang my head against the wall before I realize it. 😅 !LOLZ


If asbestos is really as bad as it is claimed...
...then I don't want to know how bad asworstos is.
Credit: reddit
@gadrian, I sent you an $LOLZ on behalf of @stdd

That's true. I'm sometimes worried I'm not flexible enough. But it's a fine line between being flexible and making your goals worthless (because you are too flexible and the point of having a goal is lost).

Very nice and detailed computation of your assets. Thanks for the share

Knowing where you stand helps with the goals (but it is time-consuming sometimes). Thanks for dropping by.

Glad to drop by! I gained alot by seeing how organized your post is.

It got more organized over time. It used to be messier at first. That's a learn by doing kind of thing.