A day quite full of events this 15 September...

We have the Leo PowerUp Day (LPUD), the launch of the Riftwatchers presale, and the Ethereum Merge, all happening today.

LPUD is a day-long event, the Riftwatchers presale will kick in later today but will be ongoing for a while and will continue with the general sale afterwards, and Ethereum Merge already happened.

I'll start with LPUD because the other two either passed (Ethereum Merge) or should last longer (Riftwatchers presale).

In what became a regular event already, LPUD happens on the 15th of every month.

As announced on the official account, starting from this month, whoever powers up LEO on LPUD gets a @hivebuzz badge too. They are also announcing a bigger Leofinance event later on where these badges (and holding as many of them as possible) will be important.

Too bad past power-ups for LPUD don't count for getting a badge.

So, without dragging it any further, here's my LEO power-up from today: 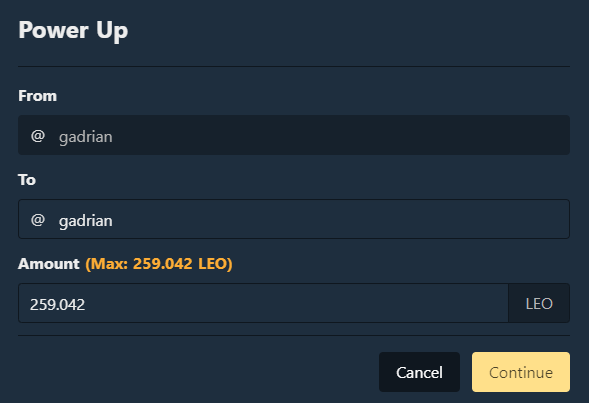 Even though the threshold has been lowered to 150 LEO minimum powered-up, I still do this by the 200 LEO minimum rule which was in place at the beginning.

With this power-up from today, I've added another serious step toward achieving my 10k LEO staked goal by the year-end. I might even surpass that and increase it. 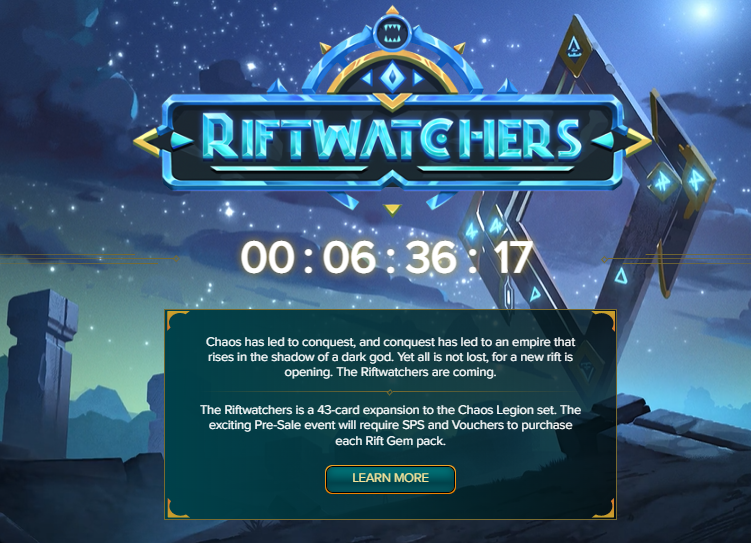 The Riftwatchers Presale Launch is hours away at the time of writing these words. I hope people who want to invest in the presale as soon as the doors are opened are ready.

Of course, unless the demand is super-high at the beginning, people should have time to participate in the presale during the following days.

But who knows? 500k packs, as much as the presale includes, may be insufficient if the demand is high enough.

But with all the different options people can choose to invest in - all coming from Splinterlands - I believe the presale should go on at least for a few days. However, this is not something one can anticipate well, so we will see.

UPDATE: Forget what I said in the paragraph above, the presale ended in UNDER 1 MINUTE !

There is also only one difference between presale and general sale for Riftwatchers. And that is receiving or not the initial airdrop, which is the promo card associated with the Riftwatchers mini-set.

Compared to Chaos Legion, for Riftwatchers VOUCHERs are required after the presale is over too.

I wrote about this yesterday.

Looks like the moment in time when "the merge" happened came and passed. Without issues, apparently, but those can surface later on too. I'm sure you can find better details from people who are interested in the subject.

But the price hasn't crashed nor pumped, which means the market has already long before included this upgrade into the price.

I think the little or no market reaction to the ethereum merge is due to the current economic crisis in the US. People are more focused on that at the moment.

In between, must I be a splinterlands gamer to buy these pack or can I just buy and resale?

I think the little or no market reaction to the ethereum merge is due to the current economic crisis in the US. People are more focused on that at the moment.

Nah, those focused on crypto find this a major event. So it would have influenced the price if that wasn't already included (and I believe it is).

In between, must I be a splinterlands gamer to buy these packs or can I just buy and resale?

If you don't want to play the game and still participate in the Splinterlands economy there are different ways. But the most 'passive' is buying SPS and staking it (or putting it in the supported pools). Flipping cards, and renting are other options, but they require a level of understanding of the game.

So, if I were you, I wouldn't buy Riftwatchers packs. While their value might rise once they are sold out, I believe you'd be better off with SPS.

Let me know if you have further questions.

Thanks for the quick reply. I think I'll go for SPS, What actually do I get from staking SPS, I tried searching this sometime ago but didn't get an insight.

I also have my eyes on the pool but still contemplating on that however 🤔.

Currently, the APR on staking SPS is about 40%. Paid as SPS and Vouchers. That obviously fluctuates. It used to be lower, but people probably unstaked to move to pools where the APR is (still) higher.

You also have the power to decide on proposals, like on Hive.

And staked SPS can help you earn from the gameplay. Later on, you'll be able to stake SPS on different players and earn if they win, so you can earn even if you don't play yourself.

This is well detailed info, it really helped. Thank you. 😊 The reward looks good, I'll take a look at it and decide.

Riftwatchers are much more expensive than previous series. Not only the booster went from $4 to $5 but in addition VOUCHERS are needed ... my first reaction is to abstain. I am not playing Splinterlands anymore so buying Riftwatchers would be for investment reasons only ... I don't know ...

Mini sets have historically been more expensive than main sets. I agree they are quite pricey, but the difference is all funds go to the DAO as opposed to Splinterlands, the company. Mini sets also usually fill in certain niches. This one's theme is high-mana cards, the kind one would play in 99 mana battles. I won't buy packs either. That's mainly because I will focus only on certain cards, compared to Chaos Legion where I wanted all cards maxed or leveled up to the limit I desire. With this idea in mind, I believe it will be better to buy cards from the secondary market afterwards, rather than packs.

Oh, this is a "mini set", I wasn't aware. I thought that as Chaos Legion approaches 10 mil. packs sold, this is the next one. Thanks

Are getting in on the riftwatchers cards?

I won't buy packs, but I will buy select cards afterwards. It is my choice but that is based on my situation and plans. Everyone has to decide for themselves what is best for them.

Maybe buy some packs to hold and sell them after riftwatchers sell out, select cards make more sense to me too.


I went to visit the wife's grave today.
She still thinks it's going to be a fishpond.
Credit: reddit
@gadrian, I sent you an $LOLZ on behalf of @stdd

Thanks! You did a nice job yourself, which is great.

You are right about the overflow of information.
The situation is not going to affect the market now but on the long run it will contribute to the bull run.
Peace

There is a great sign for the crypto sphere in general when developments are completed are rolled out during a bear market.

Maybe we are spoiled but we are kind of used to big days on Hive lately. ;)

A very eventful day indeed. Doesn't Hive Fest start today too?
Always something going on around here. That is a good thing.
!ALIVE
!CTP

Good Afternoon and Thank you, @youarealive! Enjoy your day.😀

I think this is the get-together day, but the real Hivefest starts tomorrow.

Thanks, @gadrian! I will most probably be listening to the replays as I get the time.
Then I can pause them as needed as well.
!CTP

That's a good idea, I often prefer recordings to live streams for this reason and because I can speed it up.

I also love my Digital Video Recorder because I can binge-watch my shows and fast forward triple time through the commercials. 😀

Thanks for the reminder about LPUD. I almost forgot.

You're welcome. There is still time.

Amazing that 500,000 packs were sold in less than a minute.
That is simply crazy.

I was also surprised by how fast the presale went away... 3 million USD in less than 60 seconds.

Well, it's mostly SPS. I believe many prepared their SPS and vouchers over time, they didn't FOMO in at the last minute to buy either. But still... impressive!

Way to go on the LPUD!! You will almost certainly reach your goal at the rate you have been going :-)

Thanks! Yeah, that goes is almost certain. I might even increase it.

I just increased my goal today an made a huge LPUD. Gonna be pretty much all LEO (well, mostly) for me until the end of the year.

Been thinking about it for the last couple of weeks and That is definitely where I want to focus.

Will write a bit more in #MyHiveGoals this weekend, but that is the gist :-)

Nice! Focusing should help you a lot.

It has all been happening today!
Nice power up and Happy 4th LPUD:)

Thanks! How time flies... Have there been 4 of them already?

There have and time really does fly!

Thanks for sharing your thoughts on all the major goings on in crypto.

There's so much to stay on top of this week!

Yep, HiveFest starts today, and I still haven't 'recovered' after the madness with the FOMO in Splinterlands from yesterday. :)

I guess my price for VOUCHERS was too high as they didn't get sold out but I guess I will try to sell what I can and buy back later. It's kind of a surprise to see it all sold out in less than a minute though.

So you're not waiting for the other presales/sales before you sell them?

Prices are still elevated so I think it's better to sell now and get back in later. It's not like I won't get more VOUCHERS from my staked SPS.