Cheap Cards For The Win!

In my favorite Battle Of The Day today I faced a Price Julian summoner. A very rare and expensive card, but not very powerful as Legendary summoners go. But he brought a couple of max level Legendary monsters along to back him up, so he packed enough power in my mind.

At the start of the match, my team targeted the enemy tank and even though the opposing Crustacean King tried to heal the damage we inflicted, it wasn't enough and the Spineback Turtle was done. 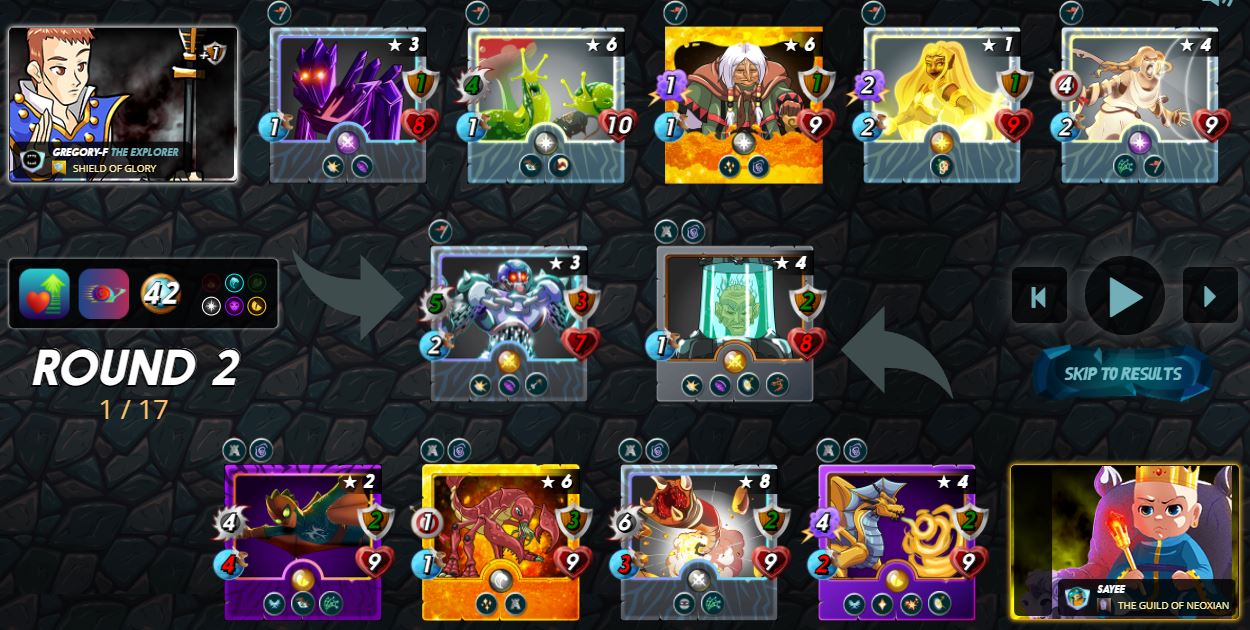 As Round 2 began, Lord Arianthus took over the opposing tank position and made things tougher for my team. A few critical misses by my opponents monsters kept my team strong and in the fight. 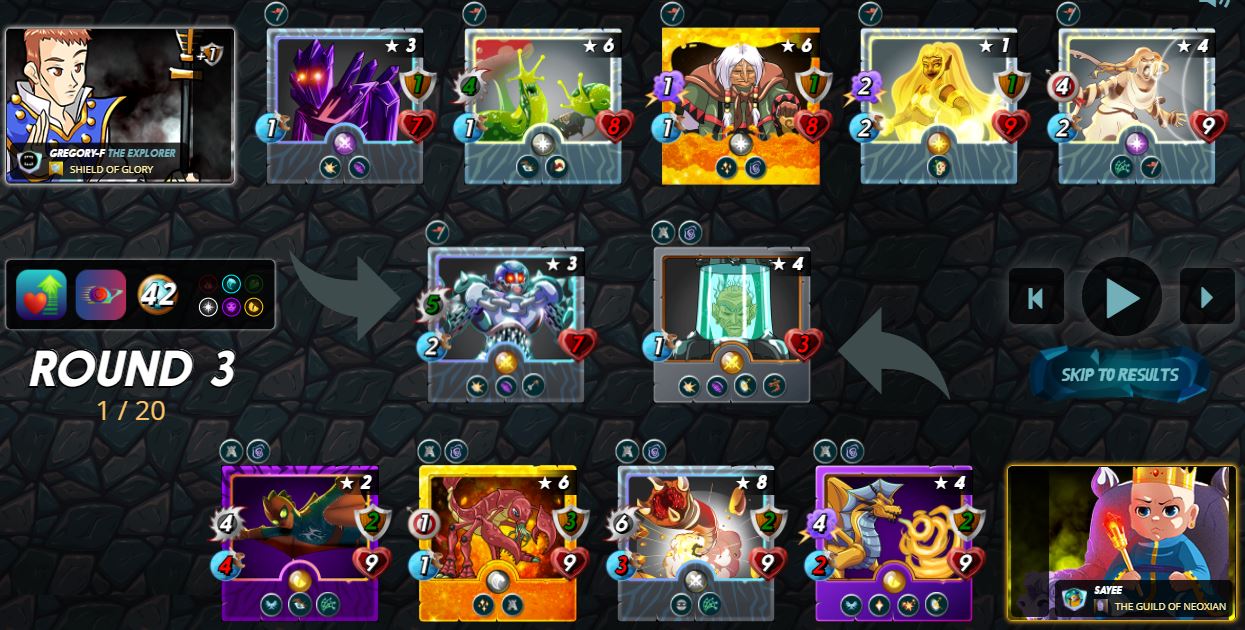 The opponents Crustacean King tried to keep Lord Arianthus healed, but my teams concentrated attacks wore him down and eventually he fell at the end of the third round. 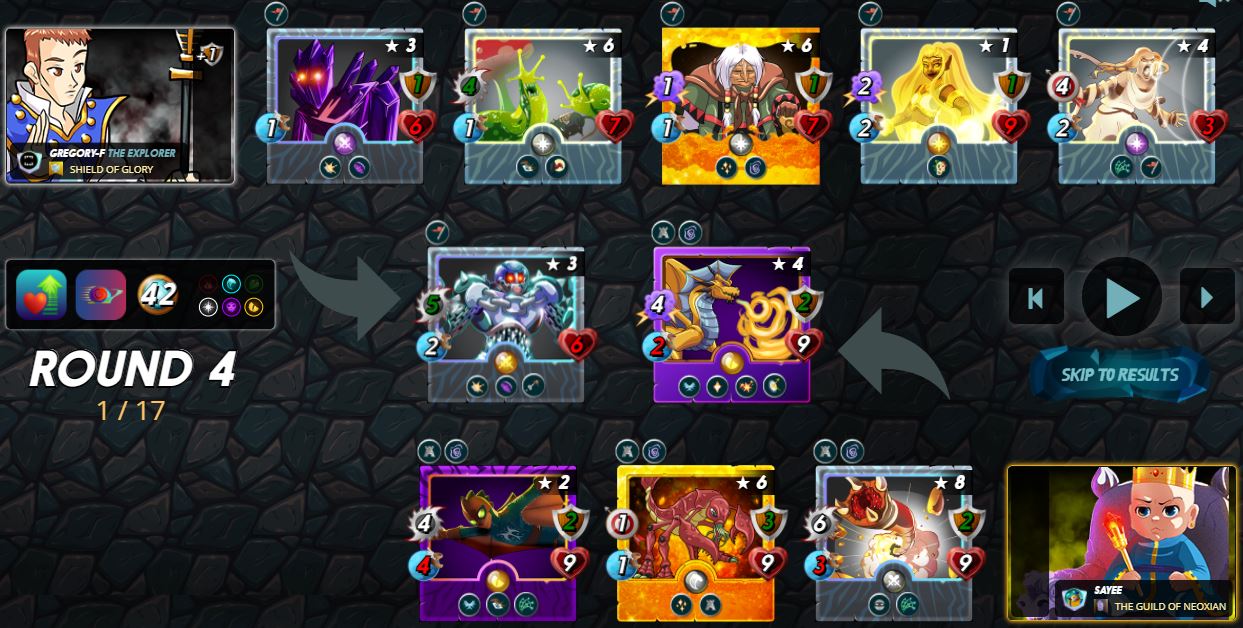 In Round 4 my opponents fearsome Gold Dragon was forced into the tank position. Repeated early attacks by my team doomed him to a quick exit before he could even heal his wounds. Sadly, my Evangelist was finally taken down and my melee monsters lost their buff and the team lost a powerful and accurate ranged attack.

With the loss of the Evangelist still fresh in their minds, Round 5 started with my team once again facing a monster of incredible power in the Sand Worm. They would shake off their thoughts of their lost comrade and lash out ferociously at their newest opponent. By the end of the round the mighty worm was badly injured.

Even though the Crustacean King was quick to heal the Sand Worm as Round 6 got underway, it was to no avail as my Cave Slug and Chain Golem combined to send the behemoth Worm to Valhalla, or where ever Sand Worms go when they perish in this realm.

By now the outcome of the match was as good as written in the annuls of the Arena's history as the Crustacean King died in Round 7,

and finally the Dragon Jumper expired in Round 8.

I also love winning with my own cards without renting expensive higher level cards. Even if it means that I have to stick in the lower leagues. Nice job.

I know what you mean. I prefer to rent out my excess cards and save up to buy better cards.

This is how you take advantage against your opponents mistake and make able to grab the victory at your side.

It's a simple victory when they miss read you, but I'll take the win anyway.

I lost this one but I think it's still my favorite battle from yesterday. Djinn Oshannus took a beating but damn if he didn't go down fighting. Dude is immaculate!

Have a !BEER and some !PIZZA while you stand amazed and fall in !LUV with the raw power of the Djinn, !BRO

Pairing him with the Kitty was a good move. He just lacked enough firepower to get the job done. I !LUV how those massive attacks only did 1 damage. That's my new favorite ability.

You should see him punk Magnor! Lol... you don't even care when he doesn't dodge it, and sometimes you want him to hit.

A Mangor killer? I would !LUV to have that!

Well have a !BEER and appreciate your luck. He’s still new so should be plenty out there to grab. 😊

Hey @gregory-f, here is a little bit of BEER from @sinistry for you. Enjoy it!

I love to play games too but I'm on mobile phone not PC. My PC crashed few months ago. So it went dead. But I'm interested in this game.

I have good news for you then, Splinterlands is available as a mobile app! It is available in the google play store.

Wow. Google play store? It's awesome. I will definitely give it a trial. But please you have to out me through it. I love your human relationship too. Thanks alot