My favorite Battle Of The Day today had me once again facing my nemesis, Mangor. This GIANT pain in my posterior has been a GIANT annoyance ever since he was introduced to the game and I faced him in the arena. To make matters worse, the ruleset Unprotected was active, meaning I would be facing Mangor without any armor to protect my monsters from his first strike.

The enemy Goblin Shaman cast SLOW on my team to start the match and in the blink of an eye, I lost my first team member, Goblin Thief. When my Spirit of the Forest tried to counter attack, it just Enraged Mangor and transformed him into a deadly behemoth. My Nectar Queen bore the brunt of his wrath and to her credit she withstood it well. 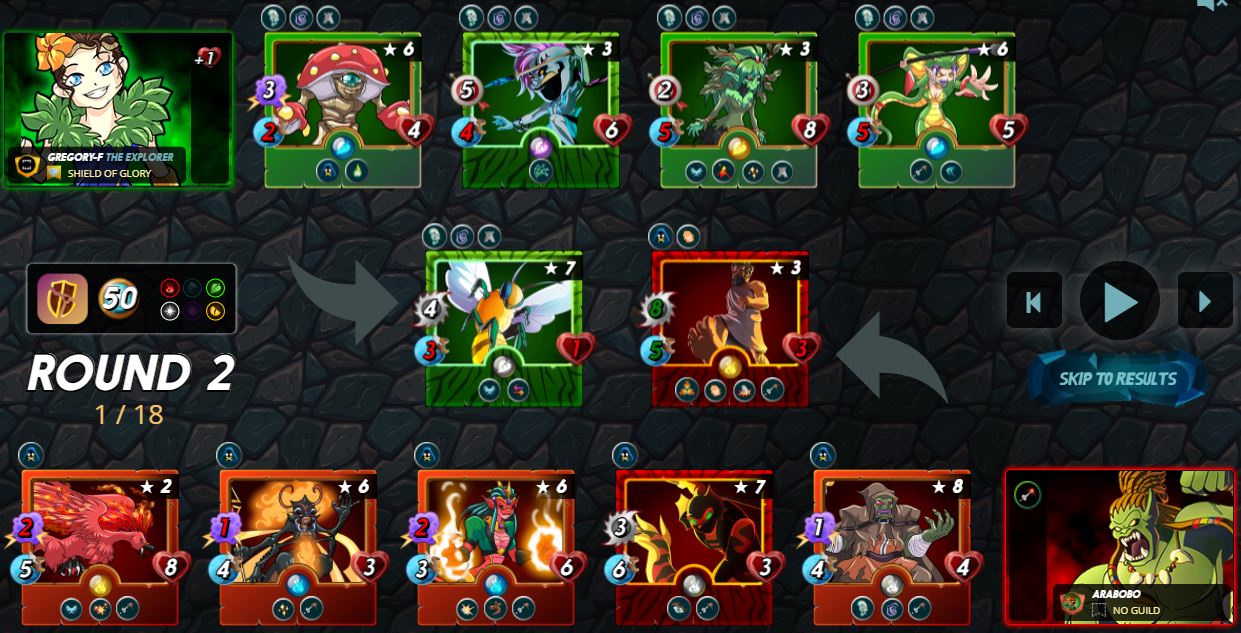 Round 2 started off badly for me, with the enemy Goblin Shaman still SLOWing my team, the enemy Serpentine Spy was able to strike first and kill my Nectar Queen before Spirit of the Forest could heal her. But my secondary monsters were able to rally and took out the enemy Mangor, Goblin Shaman and Serpentine Spy before the round ended. 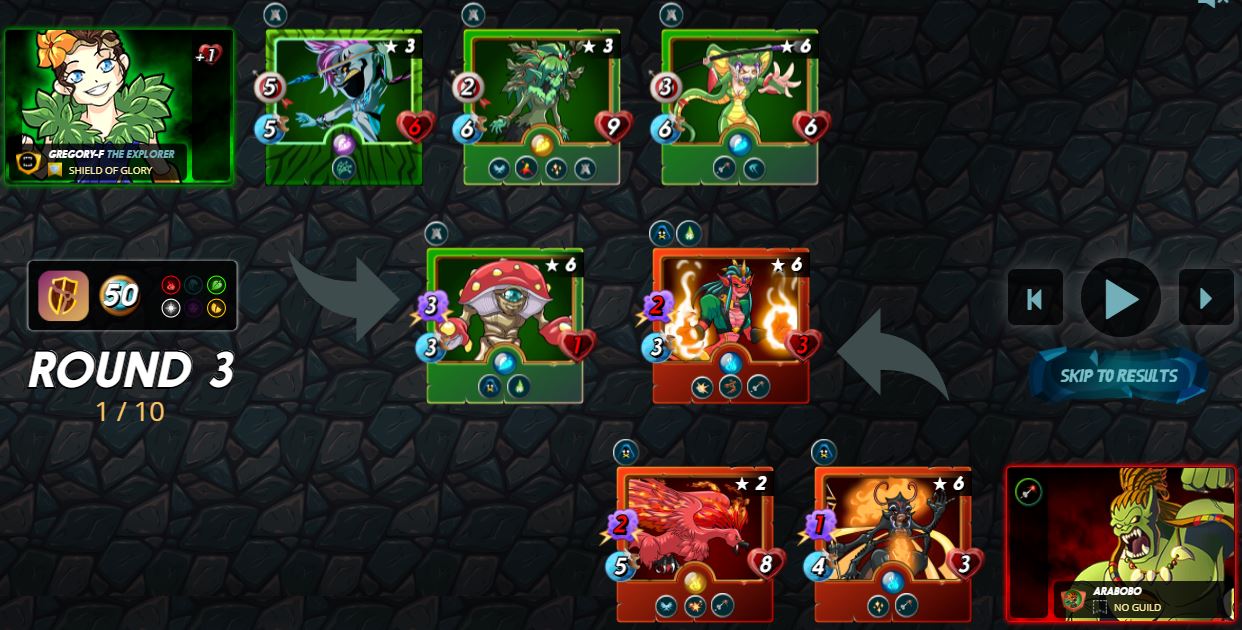 With the start of Round 3, my teams prospects had definitely improved and now that they were no longer SLOWed, Spirit of the Forest was able to heal my Mushroom Seer before it could be attacked and killed. With my team now in control, they took out the Naga Fire Wizard and Beetle Queen, leaving only the enemy's Elemental Phoenix standing. 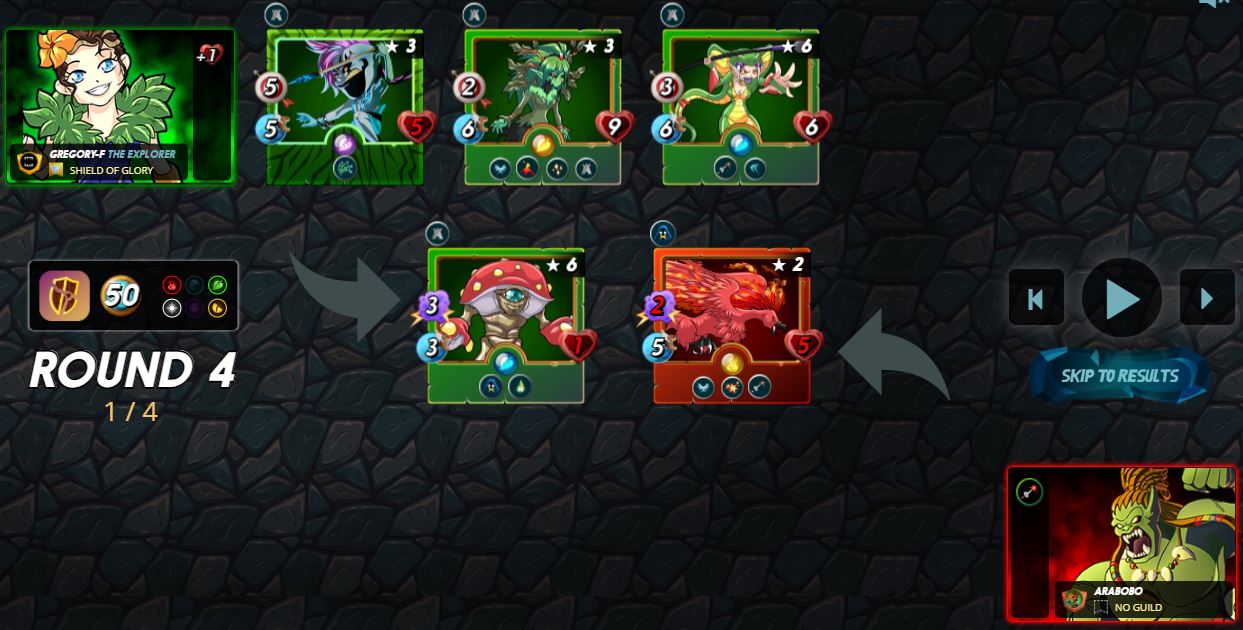 With no support and a reduced attack thanks to my Mushroom Seer's Silence ability, the Elemental Phoenix did not last to the end of Round 4.

You can enjoy the complete battle at this link: https://splinterlands.com?p=battle&id=sl_ac5512dadf622c9d77cb87a49efd7957&ref=gregory-f

I watched this at max speed and it looked like less of a comeback and more of a slugfest that your team gave back harder than it got, despite taking some hard hits early on.

I might slow it down to properly enjoy with some !BEER and !PIZZA.

It does have a different feel to the battle when you watch it at high speed.

Lol. I keep telling you, !BRO everything’s better with speed!

!BEER & !PIZZA, too, and I can’t gripe about a little !LUV but if you got time for any of that you’re not living the gospel as laid down. 😁

I !LUV the pizza and beer too, just never seem to have enough.

Bro, can you explain to me what benefits are in a guild?

Sure, you get a percent bonus for match rewards and a discount in store based on Guild level. You also can participate in Brawls with your guild and get Gladiator cards. Coming sometime in the future will be SPS rewards also.

That's very good, I'll try to join some Latin guild, because the truth is I don't speak any English hahaha.

Nicely done, the earth team is my second favorite next to Death.

That's an epic victory as first i think opponent is more stronger and attacking very soon, but you have nicely managed it to victory. Now i am playing this game and studying all the facts from youtube, its now feels amazing if you get victory though i am in bronze II level and didn't buy the spellbook but surely done it while i learn most of the facts.

Congratulations on joining in the fun! Let me know when you buy the spellbook.

Yeah, i am just waiting for the next wave for hive or hbd pumped up which could help me a little. Actually i am just scaring to loose game with others, anyway mostly i have leanr on mobile.

I would not want to face Mangor while my monsters have no armor. Nice job.

Armor certainly helps. But with Qid Yuff's Pierce ability it would take a lot of armor to absorb Mangor's enraged attack.