Why the Bear Market is Good for Splinterlands

Back in 2018, there was a little known trading card game called Steemmonsters (rebranded to Splinterlands) in the middle of its Beta phase. It had shown some steady growth and implemented NFT technology long before Bored Apes existed and long before your neighbour's mother knew what Crypto Punks were. In this game you would earn NFT assets and crypto currency by just playing it and it was revolutionary in that you could sell those assets at any time without the need to breach any eBay ToS. Later this would become known as Play2Earn and people would believe Axie Infinity invented the genre.

2018 was a dark time. I was one year into crypto back then. I jumped in right on the ICO craze and into the last bull trap of the previous crypto winter. My portfolio was down 90%. Coins like NEO, Monero, Stellar, NEM treated me badly and I fudded what was left back into some Satoshis only to realize that it was so unsubstantial that it was a dead loss (three years later this 10% dust remainder would pump so hard it broke me even with a 2x ROI but that's a story for another time).

But I am not one to despair, I put on my big boy pants and decided to earn back my losses. While researching how one could earn crypto, I found a little known blockchain called Steem that would pay for blogging. I tried it. Turns out it paid near to nothing cos' Steem was a giant fuckup back then with whales and voting bots circle jerking each other. Luckily Steem forked to Hive and removed not only the ninja pre-mine from its protocol but also the toxicity from its community.

I would long have left Steem had I not continued to encounter posts about this niche trading card game. You know, I was an addict Yu-Gi-Oh! player and I had tried some online TCGs but would always be disappointed by not being able to sell my old deck or take it over when a new version of that game came out. The concept of actually owning the cards was appealing, so I tried it out.

At first, I was disappointed. The monsters were cool, but I was looking forward to another MtG clone and got an auto-battler instead. But soon I learned about the game's complexity with all its different rulesets and monster abilities that kept getting added and provided variation in every match. In retrospect, I'm glad Splinterlands did not immitate MtG. There are so many other games that do now (Gods Unchained and Skyweaver to just name two). Splinterlands stands out as a game of its own.

Anyhow, I'm getting distracted here, so back to 2018. The game started by selling Alpha cards to early investors. Those were not even playable at the time as the gameplay was still under development. So, when the game launched the team fulfilled a promise and delivered to their community. Two years later in 2020 they would take the next big step and do the next Alpha sales. No, not for cards. But for the Splinterlands land expansion. Once again the team hit the nail on the head, as this was before the 'Metaverse', Sandbox or Decentraland were mentioned in main stream media.

Splinterlands, now out of Beta and in the Untamed collection, was still flying under the radar, though. Choosing Hive as a blockchain, let them do all this fancy stuff ahead of time (and before usable Ethereum scaling solutions or other well-known EVM chains existed). With three seconds blocktimes and feeless transactions Hive was the perfect way to bring a game (and not just its assets) on the blockchain. But Hive was little known and people searching for blockchain gaming would not find Splinterlands.

But @yabapmatt (co-founder, and master of game economy). Had an idea. Splinterlands would launch a governance token called Splintershards ($SPS). This token would not be on Hive, though. Blockchain tech had evolved and Binance Smart Chain (BSC) had become publicly visible Ethereum alternative. BSC, playing a lead role in the DeFi craze that came up with Pancakeswap among other DEXs, would become the native chain for SPS.

Not only was this a great concept, it also was the perfect timing. SPS launched right into the middle of the Play2Earn hype. The token went moon in July 2021. 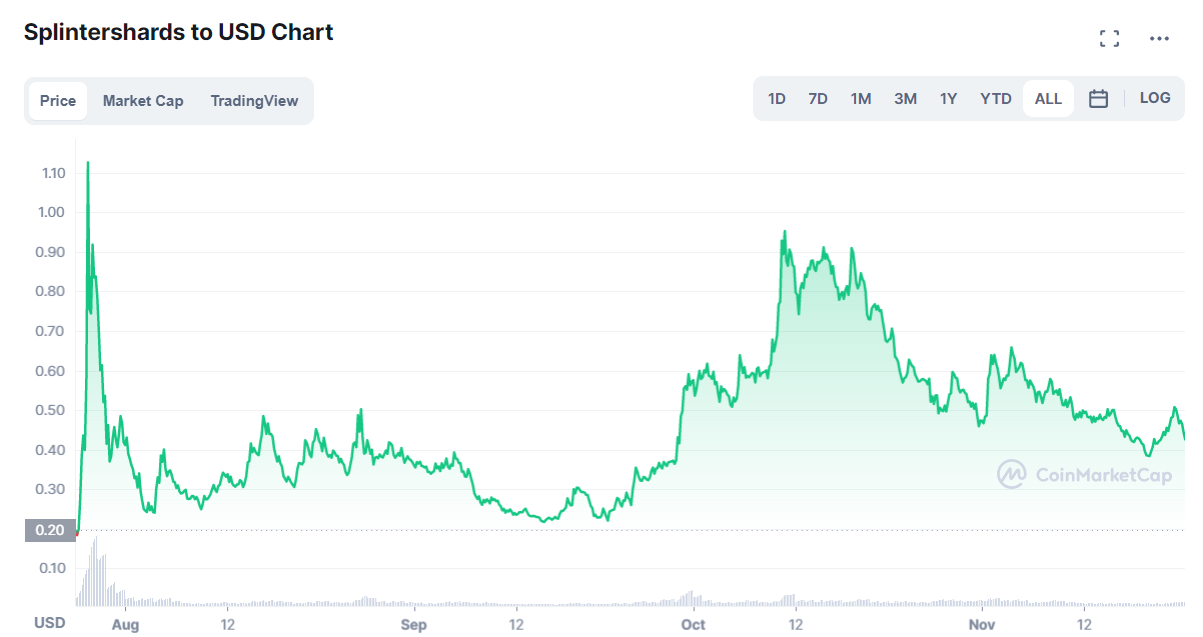 And likewise did the player base. Soon, the game was seeing 10'000-20'000 accounts created daily (from 50-100 a year before that). 500'000 daily active accounts made the game the number one blockchain game on Dappradar. And with the growth, came the pain. Truth is, the game was just not ready for that kind of growth. The APIs could not handle the insane amount of requests and the game would show its maintenance window on a regular basis.

@yabapmatt and his newly founded team did an awesome job here. They focused for months on solving the scaling problems and worked around the clock, always running to rescue, when the dreaded maintenance window popped up. This was not just renting some more servers, this was restructuring essential parts of the codebase while paying immense attention not to cause any unwanted side effects. As if this was not enough, they did a lot of internal ramping up of the team and appointed and onboarded new team members to support and back-up Matt.

But downtimes were not the only headache. The reward system did not scale too well either. Don't misunderstand, it was thought through very well and lightyears away from the Crypto Blades or Axie Infinity disaster. But reward cards were running out of print faster than one could say 'Rusty Android' and the payout structure had (still has) some flaws. More than once did the team do fundamental changes to the rewards economy of the game. Most of these were quick fix reward nerfs because action had to be taken fast. But it was never the goal to hurt new players, so at the same time the team worked on a more profound renewal of the reward structure that went live just two weeks ago with new the new ranked rewards update and is still being fine-tuned.

Among all this mess, Chaos Legion launched as the set after Untamed. And now we had the next scaling problem. Aforementioned events had brought an influx of new players. Most of them had never bought a Beta card, let alone unpacked one. And the gameplay became difficult for them as they had only modern cards to select from while OGs would have access to all editions. To maintain an environment that keeps onboarding new players easy, the team created a new playing mode 'modern' that only allows the two newest editions to be used. By the way, if you are a Splinterlands maverick (that is, you bought at least 1000 booster packs in the official store), you can try the new game mode on the test server where @cryptomancer just released the new ruleset for testing. 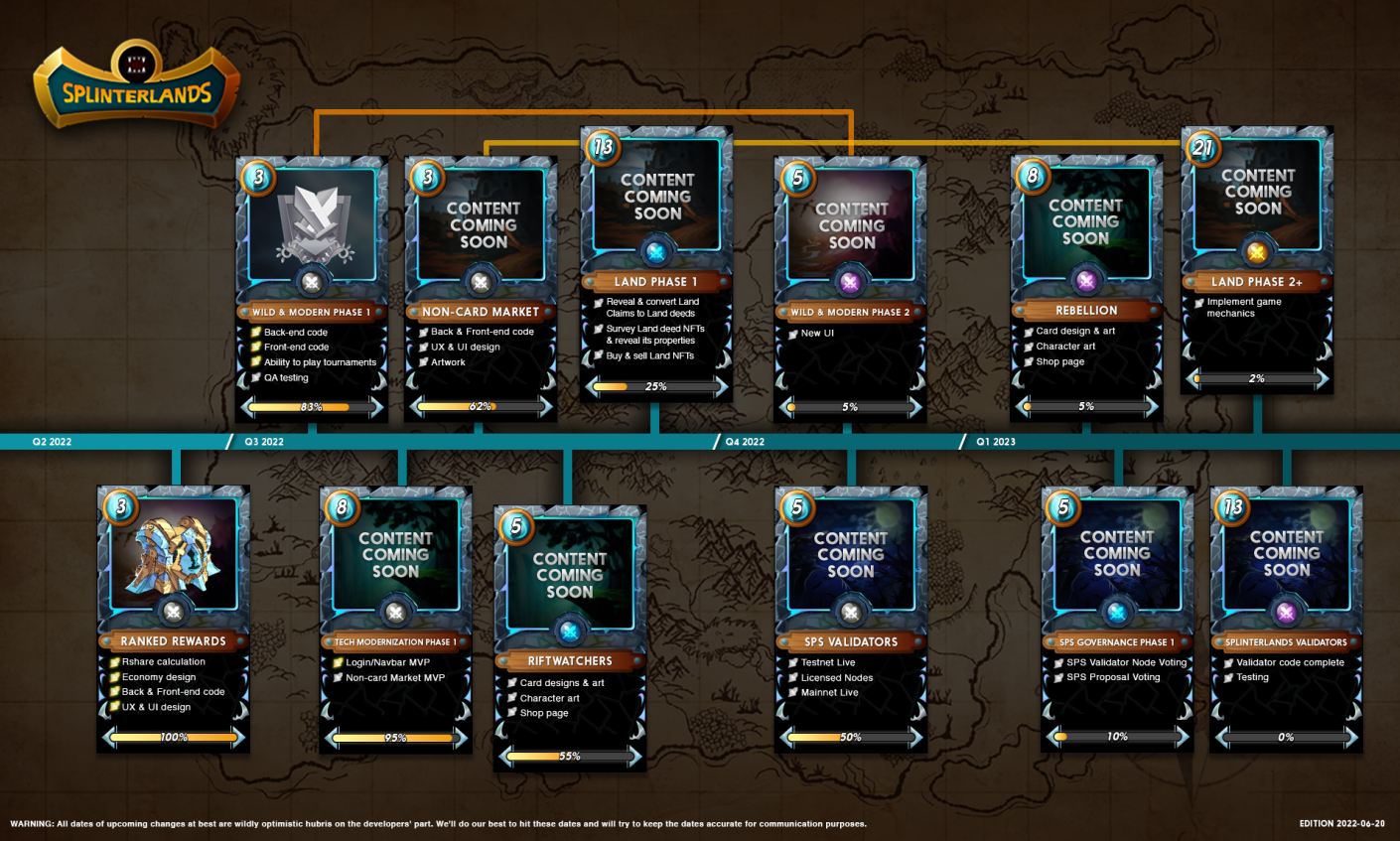 All this scaling and adapting took its toll and pushed the development of core features back into the backlog.

But do you not see how elegantly, efficiently and skillful the team is solving all these issues? Imagine the common 'number go up guy' not breaking the game anymore because he sold low and left crypto until the next bull market. Imagine the team (their funding secure from previous sales) directing that dedication and focus towards the land expansion, validator nodes or their partnership with Warner Music Group. Imagine them doing this for three more years until the next crypto bull run starts. Where will Splinterlands be then?

I'm not going anywhere. Bear markets are for building.

Disclaimer: No financial advice included in this article. Just sharing my personal experience. Do your own research!

Promo offer for new players/investors: Use my ref link and contact me here or on discord (handtalk5#6665). I will get a $0.50 referrer bonus if you buy the summoner’s spellbook to unlock the Play2Earn features. If I can confirm you as a referral who made the purchase, I will return that to you in form of Splinterlands cards. Just message me the card(s) you want for up to $0.50 and I will get them off the market for you.

Dear @handtalk5, we need your help!

The Hivebuzz proposal already got important support from the community. However, it lost its funding a few days ago and only needs support to get funded again.

Dear @handtalk5, sorry to jump in a bit off topic but may I ask you to support the HiveBuzz proposal?
It recently lost its funding, is struggling to get back above the HBD stabilizer proposal, and is in dire need of help.
You can support it on Peakd, Ecency, Hive.blog or using HiveSigner.