The Disintegrator for this week. It's a neutral monster melee monster, kinda expensive mana-wise since you only get 2 damage and 5 health and 2 armor. From that, I think there are better thanks out there however, what makes this monster interesting and useful is the ability "Demoralize" that will lower Meele attacks for all the attackers in the opponent's team. language

Going up in the levels The Disintegrator gets Trample at level 5, Knock out at level 8 and finally Retaliate at level 10. The rest of the stats also increase going up the levels, but I would argue that the abilities are what make this monster special. 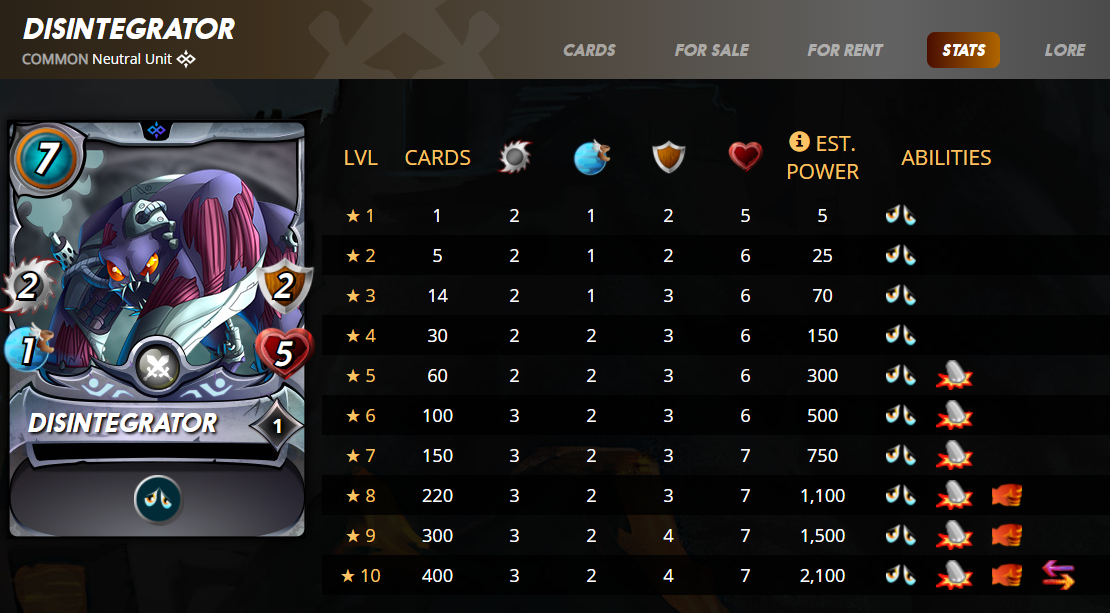 Water, Life, Death, and Dragon Splinters were available to choose from and my opponent had chosen quite different splinters in the last 5 games so I wasn't sure what they would field.
With this in mind, I picked the Dragon splinter as I have a level 3 Quix with support from the water splinter. I made this choice since I wanted to use the demented shark to get an extra attack while being able to use the Deeplurker since Sneak monsters can't be used.
Besides that, I picked the Djinn Chiwala, a great tank! Behind I picked the Twilight Basilisk with Stun, since I imagine a lot of attacks would come from the front. In the middle I picked the demented shark as mentioned and the Disintegrator, increasing my offense and lowering my opponents. At the back and put the Deeplurker and the Uraeus (brain freeze on my part!)

My opponent picked the dragon splinter with life. Seems like the opponent also had a brain freeze as he picked a Stich leech. He also had Carnage Titan behind his Djinn Chwala and I thought that it would be a very even match. In the end my disintegrator and Demented shark gave me the edge.
https://splinterlands.com?p=battle&id=sl_1d2bb39af0044da9820ca984ca40a143&ref=highfist