Bitcoin A Store Of Value? 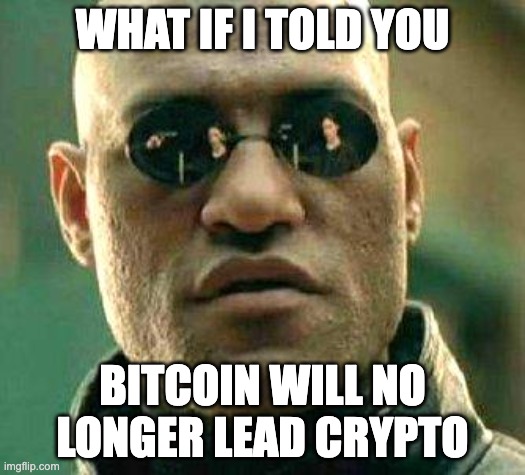 What if I were to tell you that one day in the not too distant future, Bitcoin will follow the crypto market instead of lead it?

I'm not talking about "the flippening" or whatever the Ethereum Gas Lovers Parade is going on about.

I'm talking about $BTC finally fulfilling its purpose as a store of value.

A lot of people argue that Bitcoin is not a store of value and they have a point.

That's what a store of value does. If you think about it there really is no perfect store of value. I mean the gold standard of stores of value is... gold and it jumps all over the place and can go years lagging inflation.

But let's look at Bitcoin. If you put enough money to buy the jeans and video games and thumbtacks into bitcoin in 2014 and pulled it back out today, you could probably just go buy out a departments store of all their video game systems and jeans and still have a few satoshis left over.

Has it stored your value? Yes it indeed has. Is it a store of value asset? No, it's not.

Or at least it's not a store of value asset if we're measuring it against the physical realm.

But what if we measured it against only other digital assets?

I use an app to track the value of a percentage of my portfolio. It's made up of about 20 different tokens like MATIC, ETH, DOGE, SPS, ALGO, MANA, and a bunch of other ones. Some of these coins have done well and some not so well. Some have large staking rewards that compound like MATIC and SPS and some don't.

Cumulatively these 20 coins are worth about the same as one Bitcoin. The interesting thing though is that for the past year, I could open up that app at almost any time and the cumulative value has remained roughly the same as one bitcoin whether bitcoin was $29k or $69k.

With all the ups and downs of the market. The days where one coin just randomly doubles or gets cut in half. The times when there's a hardfork or an airdrop or even sometimes a profitable NFT trade. It hasn't mattered. The cumulative amount of what I track in that app has been within a few percentage points of one bitcoin.

Take a look at the bitcoin dominance chart. You can see that for about the last 10 months, its dominance really hasn't moved. Of course it started years ago very high since its creation was the birth of the entire industry but for at least the last ten months while crypto has been gripping the world, it's stabilized out to the point where I'm not even sure if Bitcoin is leading crypto or crypto is leading bitcoin.

One thing is for sure though, if you ignore how many pair of jeans Bitcoin can buy you and pay attention just to the digital realm, Bitcoin has acted as an almost perfect store of value.

And that's what I believe we're headed to. To me, the line is already blurred on whether the greater industry is leading Bitcoin or Bitcoin is leading the industry but I think it's going to shift more and more toward the latter as the crypto industry grows because that's what a store of value does. It follows.

It goes up and down to track and store the value of whats going on around it.

If you're into crypto, you probably understand quite well that it's growing far faster than the physical world. There's very little investment into the digital realm right now and many of us believe the size of the digital economy is going to one day eclipse that of the physical.

At some point, people who have all of their resources in physical assets are probably going to fall behind and lose purchasing power against those who have their resources in the digital realm. That means it behooves us to have as much of our investments as possible in the right crypto assets (not financial advice-I eat crayons).

Unfortunately, for quite a while to come, the digital realm is going to be the wild west. In other words, it's going to be volatile. It's going to be dangerous. Many projects will go to zero. Sophisticated scams are going to pop up. Technologies are going to fail and wallets will be emptied. As we move forward, we are going to need a place to put your digital money when you just need it to not fall behind but you aren't willing to put it at risk. That is bitcoin.

So is Bitcoin a risk asset that will make you rich or is it a store of value that will simply protect you value without moving the needle on your wealth?

The answer that seems to just depend on which world you're in.

You're welcome @imno, that's with pleasure! Thanks for being so active on this platform 😊👍

The interesting thing though is that for the past year, I could open up that app at almost any time and the cumulative value has remained roughly the same as one bitcoin whether bitcoin was $29k or $69k.

That is a very interesting observation.