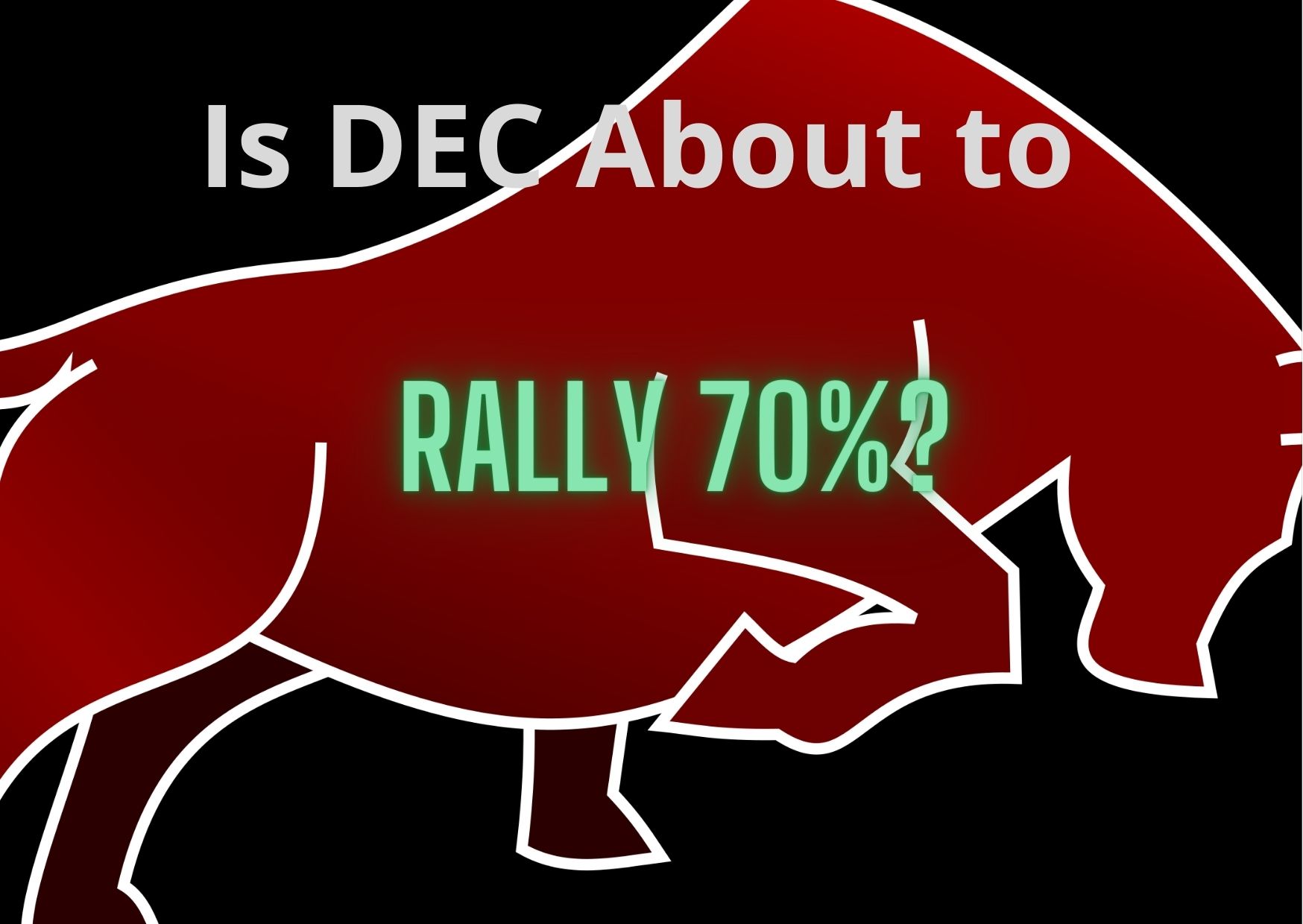 Many people were expecting a crash in DEC when the airdrop ended. They weren't entirely wrong as DEC did momentarily break down below 50% of its "peg".

But it only stayed there for a few hours and now its already up 20% from those levels and climbing. 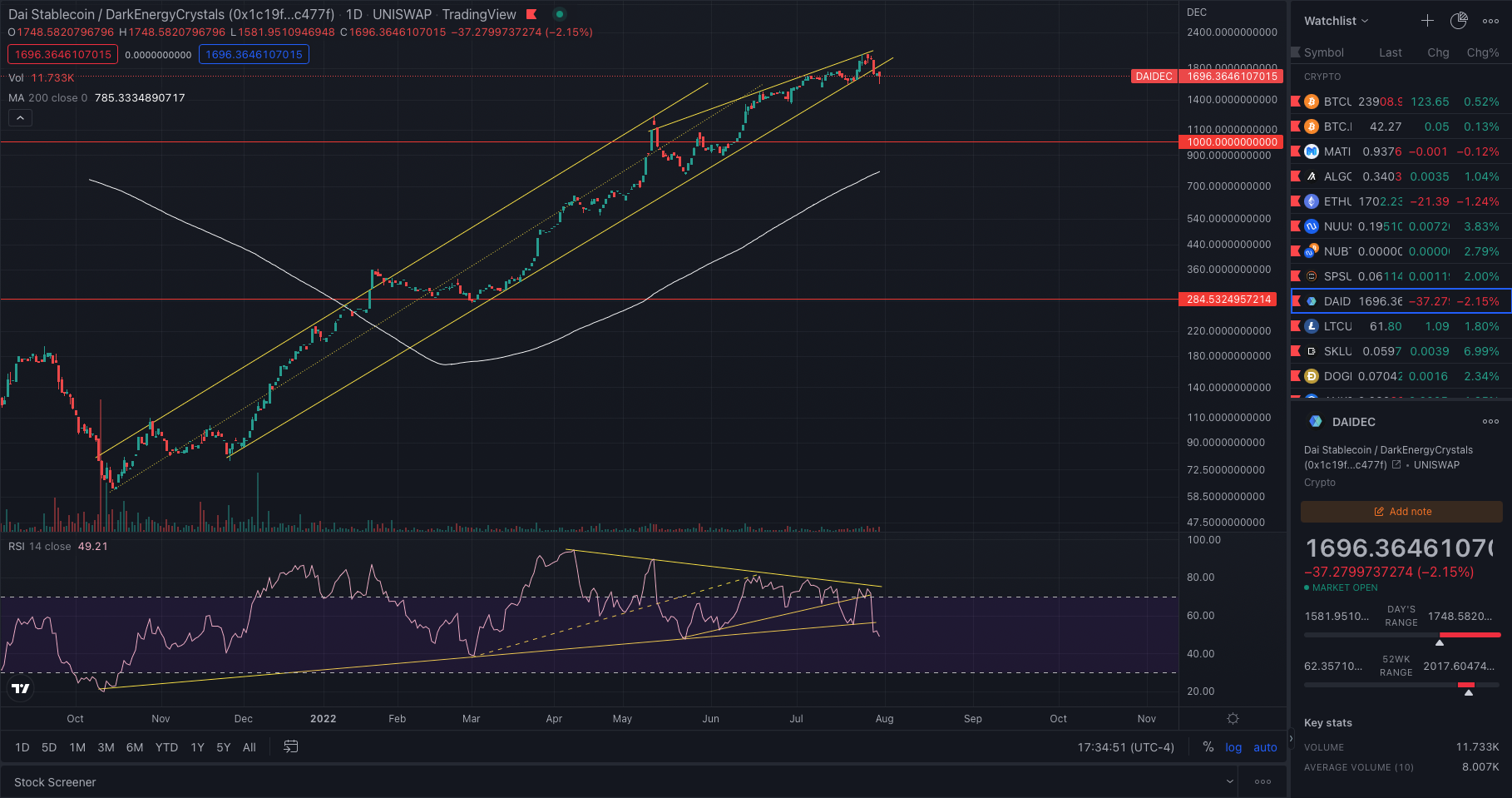 (This is an inverted chart of DEC. Peg is getting back to 1000. As you can see its currently at almost 1700 but that's down from almost 2000 a few days ago. As you can also see, it's finally broken down from the uptrend that's been unbreakable all year. It retested it and failed. Same with RSI. The chart is saying the move back to peg has already started.)

But how likely is it to get there soon with all this selling pressure from the end of the airdrop?

I think that selling pressure is really over. A few people ran to sell and that did cause a temporary price dip but most of those people were selling because they expected a further dip they could buy back up. It didn't come.

Most DEC holders aren't going to sell their DEC when there's a 70% rally on the horizon. And when it dipped below 50% of the peg that meant a 100% rally was coming and it got bought up in a hurry.

Seriously, watching people try to sell DEC to get a slightly better deal on a 100% coming rally is a lesson in how greed hurts investors.

Another reason why it didn't sell off the way people expected it would was because the DEVs already announced the new DEC pool rewards would include a solid amount of SPS.

No longer is anyone going to be able to get the same amount of SPS rewards they got int he airdrop but its not about the total amount you get, its about the percentage of the total supply being minted that you get. It's about keeping up with inflation.

The inflation just dropped dramatically but it's still there. ANd the only way to keep up besides buying SPS directly is to be involved in the DEC/SPS LP pools and to keep your SPS staked.

This means, holding DEC is still one of the best ways to get SPS.

If you missed it, the devs said they started calculating rewards for the new pools as soon as the airdrop stopped. They still need to put the new smart contracts in place but when they do, back payments will come in from the time you've been in the pool.

Another place all that DEC is going is into card packs. At this price, packs are selling for a 41% discount. Of course that's only if you are actually buying DEC with outside funds just to buy packs. Otherwise it ends up a wash. A pack will always cost 4000 DEC no matter what so if you're just buying from your stash, there's no advantage to buying today.

With that said though, in the last week or so there've been 300k packs sold.

That is 1.2 billion DEC taken out of circulation until the devs decide to spend it back into the economy. For right now I have a feeling they are just soaking it up.

Due to the amount of players buying cards on the secondary market in credits and the fact that the game pays out the seller in DEC, the Splinterlands company ends up being a net buyer of DEC to fill those needs. That means until the secondary market picks up with lots of new money coming in, that DEC will likely not see the market. By then we'll probably have another rally catalyst coming.

DEC inflation is about to drop dramatically 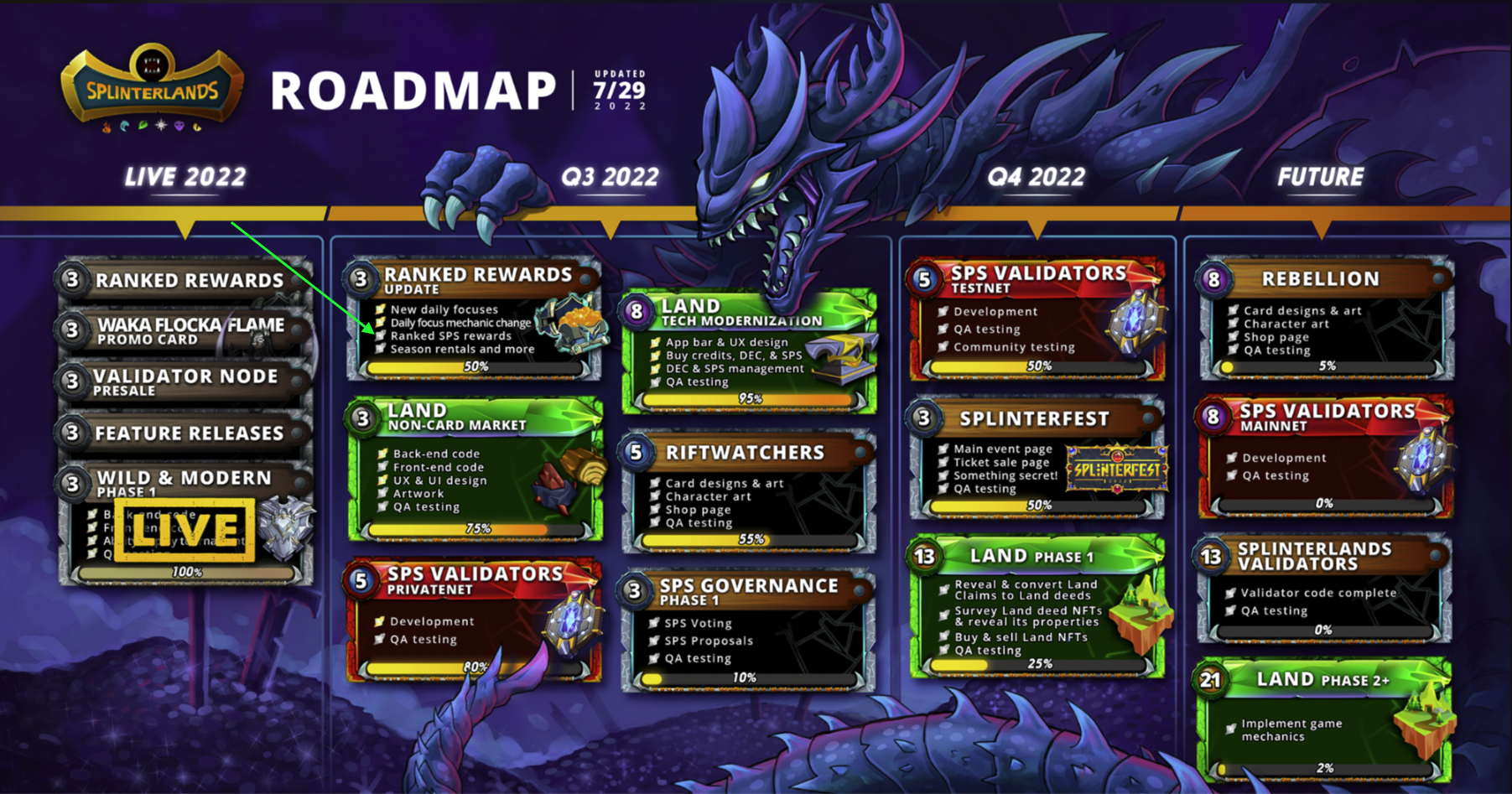 This is the single biggest reason the rally is coming. If Splinterlands stays a popular game with people playing it, DEC will stay in demand but they won't be giving it out anymore.

In a few months, the only way DEC will enter the economy will be liquidity pool rewards and burning SPS.

The rewards from liquidity pools will only be about 1/5 of what's coming right now. So we are about to see an 80% reduction in DEC inflation as the game continues to pick up in popularity.

There's about to be a lot of DEC burned. If I were a major player guild coming in I'd be looking seriously at the price of DEC right now because it would cost 40% less to get in and get those upgrade coming than it will a few months from now if DEC makes that run back to peg.

THe last thing I want to look at here is the economy and monetary policy. Since DEC doesn't exist in a vacuum, this is important. The Fed just came out and raised rates the expected .75 points and everything rallied hard.

Well one is because it was expected. There was no negative surprise. But also its because some of the fed's statements were slightly more dovish than they've been in the past. Many indicators coming out now are showing inflation evening out and that's leading a lot of people to believe the fed might loosening up its grip on the market. This means we could see further recoveries.

Usually what happens in markets like this that most of the market has a bit of a recovery. Then it becomes a stock/crypto pickers market. The standouts get rewarded which everything else flounders. I could see a world where bitcoin hangs out at 30k for a while.

Meanwhile something like Splinterlands, which currently has so much going for it, might wash out the last few sellers and then be free to start its march higher. This would start with DEC heading back to peg. Which again, is a 70% increase from here.

I think DEC heads back to peg within the next 1-3 months. And while this isn't an article about SPS, I think for the most part SPS will be an equal to even stronger winner. This informed my recent decision to sell out of the Swap.hive/DEC and BEE/DEC LP while building my position in the DEC/SPS pool. If two coins move up together, there's no impermanent loss.

I never know what to do about my DEC but now i'm using it to rent cards so it will dwindle quickly. I'm wondering if I need more if I want to rent cards. Think i oughta sell my rising star profit pennies for pennies of DEC?

I think DEC is pretty much gauranteed to head up against USD but its hard to say if hive decides to keep up. I've been turning everything into DEC or CENT lately.

My starbits I've been staking on records or buying 12 packs. I haven't seen a reason to do anything else but there's certainly nothing wrong with a little bit of cashout. I do think starbits will eventually get through this backlash from the change and will head up again. Just no idea how long that's going to take.


What's green and sits in the corner?
A naughty frog.
Credit: fallingforward
@cflclosers, I sent you an $LOLZ on behalf of @imno
Are You Ready for some $FUN? Learn about LOLZ's new FUN tribe!
(6/10)
0
0
0.000
Reply 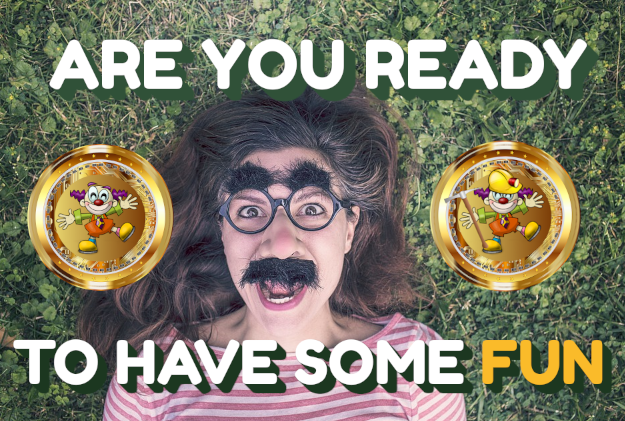 well I look at it that I will definitely earn about 4000 to 5000 starbits a day profit. Not sure where I will earn DEC so maybe I want a little of that without having to pay for it.

Can you just confirm that these Diesel Pool LP rewards are real?

And that they are actually accruing on the back end before being paid out in a lump sum when the team gets their act together?

I don't have a ton of SPS, but probably should unstake and get it into the SWAP.HIVE:SPS LP.

That's how I read this post. Specifically this part:

QuoteWe are working as quickly as possible to get the UI for claiming rewards ready by that time as well, but in the event that the UI is not ready then, the rewards will still start at that time and will accrue for players who provide liquidity until the claiming is released.

I'm personally avoiding the swap.hive pairing pools. If SPS makes a run, you lose that gain in a swap hive pool . I'm holding the DEC/SPS pool until DEC hits peg. I think they'll move up somewhat together to that point. But for now, you're still getting staking rewards in SPS and vouchers if its staked with no risk of loss.

Those are my thoughts anyway. I also still want to see what those rewards look like in practice.


Why can’t you trust an atom?
Because they make up literally everything.
Credit: marshmellowman
@holovision.cash, I sent you an $LOLZ on behalf of @imno
Are You Ready for some $FUN? Learn about LOLZ's new FUN tribe!
(9/10)
0
0
0.000
Reply @thepimpdistrict 41
2 months ago
You must be killin' it out here!
@entrepidus just slapped you with 1.000 PIMP, @imno.
You earned 1.000 PIMP for the strong hand.
They're getting a workout and slapped 1/2 possible people today.


What do you call a fish wearing a bowtie?
Sofishticated.
Credit: reddit
@entrepidus, I sent you an $LOLZ on behalf of @imno
Are You Ready for some $FUN? Learn about LOLZ's new FUN tribe!
(1/10)
0
0
0.000
Reply

I think game guilds need a lot of DEC.
Have a great day.
!LOLZ
!PGM I am not so sure about SPS because they haven't added enough use cases for that yet. I do think DEC will head back to peg because the inflation will be dropping a lot once they change the chest rewards.

You got one 100000+ cent token backed 100% upvote from @dailygiveaways (your page for daily free giveaways) !BEER

Hey @imno, here is a little bit of BEER from @dailygiveaways for you. Enjoy it!

If you like BEER and want to support us please consider voting @louis.witness on HIVE and on HIVE Engine.

Sweet analysis brother, lot of solid points there. Sucks i sold off most of my DEC, small stash now. Keep rockin. Going to play now to rack up some DEC r.n.


My friend Phillip had his lip removed last week
now we just call him Phil.
Credit: reddit
@imno, I sent you an $LOLZ on behalf of @captainquack22
Are You Ready for some $FUN? Learn about LOLZ's new FUN tribe!
(1/6)
0
0
0.000
Reply
Menu
Explore NFTs Proposals Pool
Trade
Trade SPT