@jakkal 59
about 1 month ago (Edited)
Splinterlands 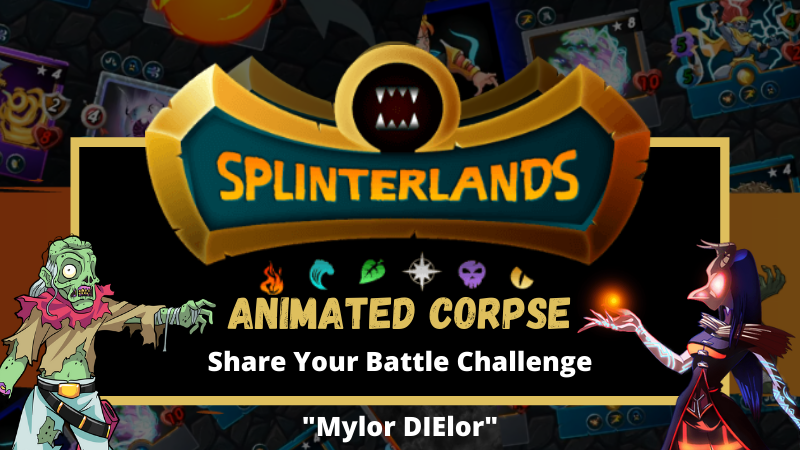 There you go guys, another Beta, in a long line of betas, celebrating the Beta cards in the upcoming release of CL, where ALL will be removed from the Starter Set AND Modern format.

Animated Corpse is a lovely Little League card with a decent amount of health and anti-magic capabilities in Void!

First, some info on Animated Corpse: Animated Corpse is a pretty simple card in Bronze, with its stats being 2 Melee, 1 Speed, and 6 Health at 4 Mana at Level 1. Leveling to 3, he gains +1 Speed and +1 Health, becoming a slightly tankier, cheap 4 mana tank.

Level 4 is when his usability grows, as he gains the ability Void, making him one of the best Void tanks for Death currently available! (Sorry Bone Golem.) You've got an Anti-magic tank, what should you load up on? Well, you're probably facing magic, so you're looking at these two summoners currently: Owster Rotwell and Mimosa Nightshade.

Owster is your run of the mill anti-magic, you're putting him in combination of Corpse's void and giving your other monsters Magic Reflect to really hurt their magic comp. This is highly specialized, but very effective at handling low health, low mana magic attackers, such as most of Water's magic core!

Mimosa is a more generalist approach: You grant Void, which is redundant for your Animated Corpse, but it helps your allies, and you eliminate healing, along with weakening ranged attackers, which can quickly overpower your Animated Corpse. The only issue here is that, many times, having the mana necessary for Mimosa means you have the mana necessary for Haunted Spirit and/or other more optimal picks. So you want to use Dragons with your Animated Corpse? Kitty and Daria are my favorites for Animated Corpse, as Daria usually works well with a Sneak Death comp, featuring cards like Animated Corpse for anti-magick, Undead Badger, Skeleton Assassin, and Elven Assassin. This creates a sort of mini version of Life Sneak in Low Mana and is super effective in Bronze and Silver, though becomes less effective at Gold, as you will be relying largely on an RNG based Poison at that point to really finish the win.

Kitty is the universal dragon summoner to be honest, there is never not a situation where Heal, True Strike, and +2 Speed is not useful for a tank. She'll heal you up, speed you up, and guide your blows. Animated Corpse benefits hugely from all of that.

Position 1
Animated Corpse can really only be placed in another position in Sneak, Melee Attacks from Anywhere, and Equal Opportunity. Outside of these situations, most of the time, Animated Corpse is best simply put into Position 1. This is partially because he's a melee attacker, but more specifically, it's because most magic attackers are front-facing attackers, so Animated Corpse capitalizes on Void most in the front-line. Honestly, this isn't the best battle to showcase Animated Corpse's strength as a Void tank, but it does do a good job of showing just how tanky he is for a 4 Mana Little League card!

Watch Animated Corpse survive the entire game, until the last kill with his 7 HP, which sounds like barely anything until you realize that most of 4 Mana is 4 HP or less.

This is especially impressive considering I matched against a Mylor. Though, his mistake was utilizing Minotaur Warrior and Grumpy Dwarf together, as they have poor Health, poor damage, and a high cost for what they offer compared to modern cards.

Wanna utilize an Animated Corpse too? I recommend trying him with Owster or Mimosa! Join me on Splinterlands and play with him in the Starter set before he's gone, or buy one for $2 now so you don't have to miss out on this Little League tank!

if you use my link, here:
https://splinterlands.com?ref=jakkal
I'll send you 100 DEC when you sign up and get a spellbook, (as long as you show up as referred) which should help you get started via renting! Also, feel free to message me, I can answer any questions, give tips, etc.

Congratulations @jakkal! You have completed the following achievement on the Hive blockchain and have been rewarded with new badge(s):