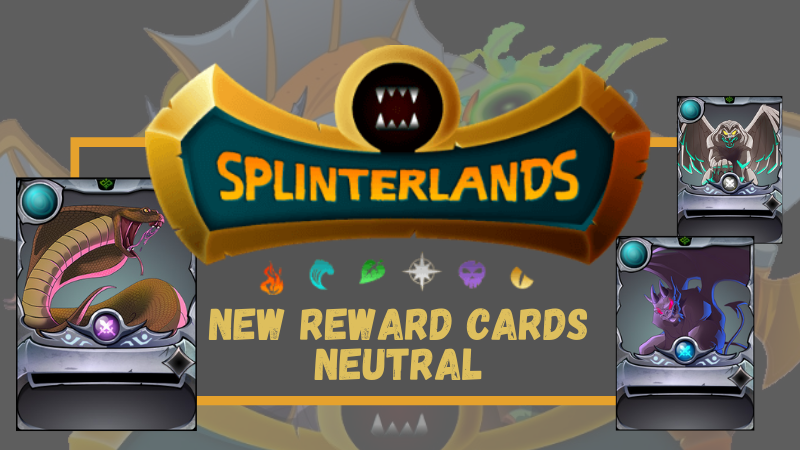 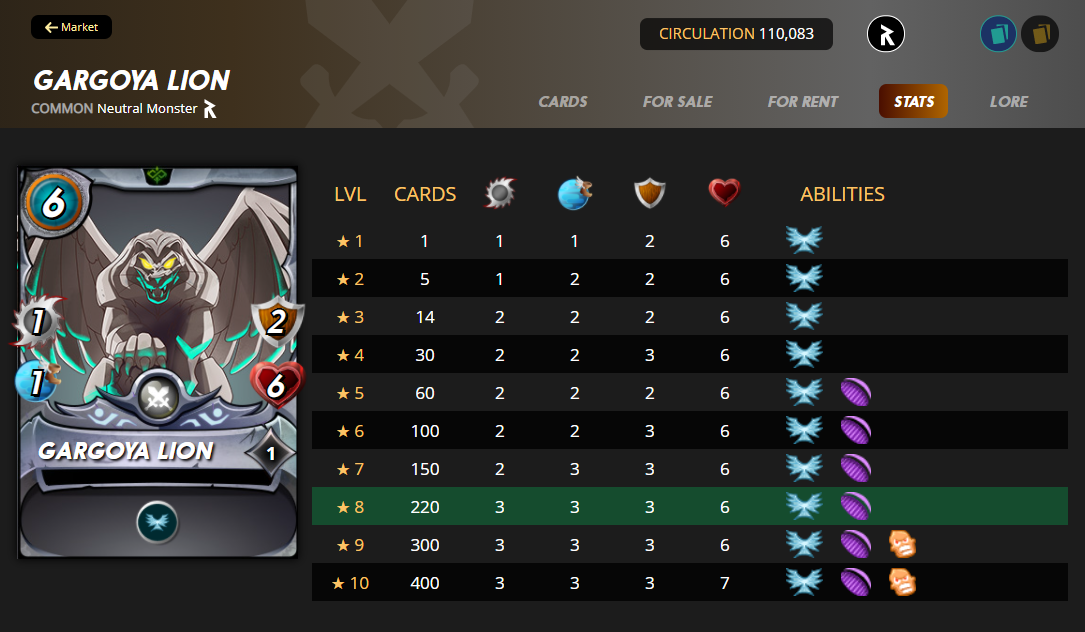 One of the cheapest cards, he may not be strong but he certainly has great uses. Gaining Enrage and Void, with Flying, he offers every Splinter an Anti-magic tank for Earthquake rounds, and he becomes more powerful, and faster when hit.

At Max Level, an Enraged Gargoya Lion has 5 Melee, 5 Speed, 3 Armor, 7 Health, and Flying/Void. That's a pretty solid card IMO believe it or not. Honestly, his biggest weakness is his very low power initially, and his high mana cost at 6 for his initial stats.

I think Gargoya is going to be the Anti-magic tank for Fire, and Fire will definitely see the most benefit here, in being able to deal with Magic a bit better.

At $.12 per BCX, meaning it costs UNDER $10 to get to Level 5, with Void, making it a great anti-magic pick for Splinters lacking a Void Tank in Modern. 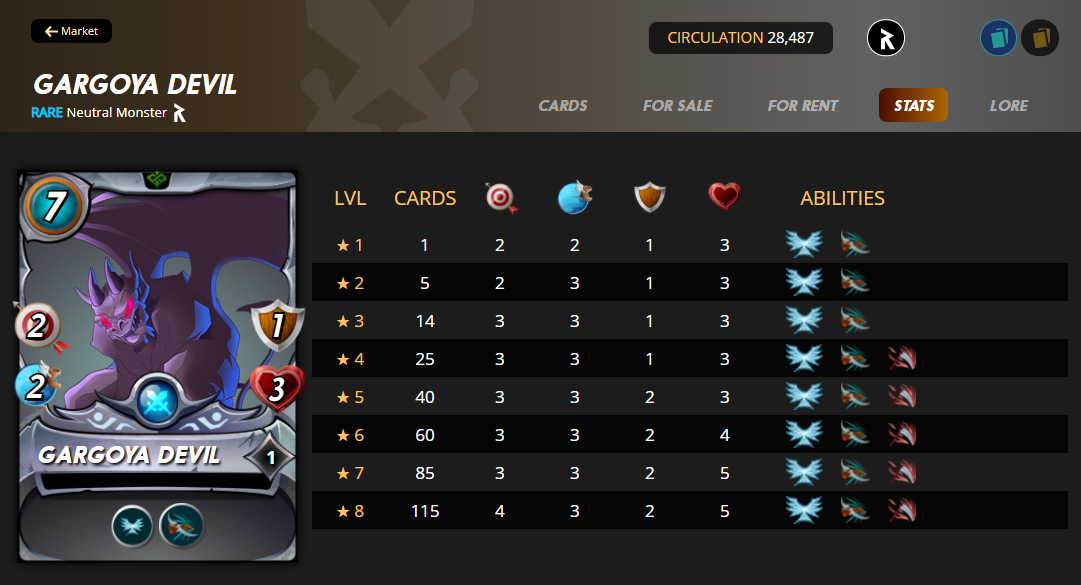 Gargoya Devil has the stats, damage type, and abilities to be the absolute perfect Last Stand killer, in fact, he directly counters almost every Last Stand card there is, dealing full damage to Torhilo, who will likely be armorless and weakened if on Last Stand, and shredding through Efreet Elder as well.

Not only this, but his use outside of Last Stand counters is still very good, with a Close Range and Flying ability, he is a dodgy Ranged tank that can be used with any Splinter. (Imagine this bad boy and Lava Launcher together on a Yodin!)

I also have him pegged as a great Ranged Attacker for Earth, as well as with Death, where he may be a solid front-line replacement in no-melee for some extra damage. His biggest weakness is low HP, but that makes him a powerful pick for Equalizer matches. 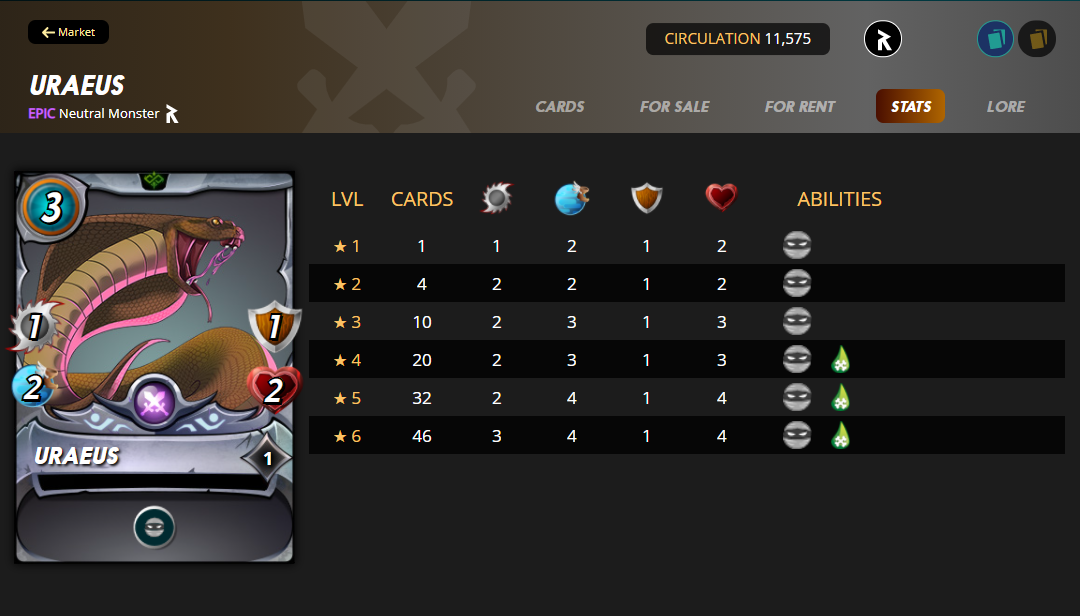 Oraeus, the new most annoying low mana Neutral there is

I love him. Seriously, +1 Melee at Level 2, which can be used in Bronze, gives SO many powerful options. He has 1 Armor, he's powerful, he's fast, he's cheap. Oh, and he gains Poison. This, imo, is one of THE most threatening Low Mana Neutral cards in Modern.

IMO Oraeus is a must card for all Splinters, but the ones he really benefits most will be Water, with Demented Shark, as well as Fire, with Malric or Pyre. He's also a nice replacement for the Poison Spider in Death, when it leaves Modern format.

At 2.89 per BCX, he costs about $60 currently to hit Level 4, where he gains +1 Melee, and the ability Poison, and really starts to be a threat in low mana.

Which card is your favorite?

Both Gargoya Devil and Uraeus have been getting a fair amount of action in my decks. I have better options than Gargoya Lion available, but for newer players I could see this being pretty useful as well. Nice write-up!

I have to imagine my favorite will be Uraeus since poison and sneak are pretty awesome. I have only gotten Gargoya Lion of these three so far so I cant really say.

I'm starting to see uraeus pop against me in bronze death matches and I always loose that's one I want. What do you think will happen to the value of a card like poison spider when it doesn't move forward with the new game? I have one and wondering if I should sell.