Not gonna lie, ever since the Gladiator Cards were released and was redeemable in the Guild Store in exchange for Merits that one could get for participating in Guild Brawls, it made me more more motivated and excited for every Brawl fight.

Some players that I know of think that this cards are 'USELESS' to have since they can not be used in ranked matches and is only playable in Brawl fights and the fact that ONLY ONE GLADIATOR CARD can be used in a Brawl fight also honestly doesn't help.

And yeah True, at the moment even I think they are kinda 'useless' especially if one is playing Splinterlands to get short-term profits. But those players are also forgetting the fact that SOON, in Guild Brawls, participating players would be able to earn SPS tokens and we all know how valuable SPS is in Splinterlands.

While there are only 2.5 Million SPS allotment per month in Guild Brawls compared to Ranked Battles 7.5 Million, just bear in mind that there is currently (if I am not mistaken) only less than 1000 SL Guilds atm and not all Guilds are even participating in Guild Brawls.

So one could potentially get a decent amount of SPS reward through Brawl fights soon from just submitting 7-9 matches every 5 days. Just how cool is that?! XD And just how strong is this Gladiator Cards?!

Well see for yourself:

This was from my previous Brawl Fight. Well to be fair, LlamaQuora is really an insane combo but 'BloodLust' ability is really overpowered when done correctly.

If you guys were too lazy to look into the battle above, well at the end of the battle my Quora went from 2 Magic 2 Melee 3 Speed 13 HP to this one: LOL Almost forgot the main point of this post is to flex about my Gladiator Card Collection so here's mine. At first look, they might not be that strong but many cards in here can replace 1 monster card we normally use in Brawl matches and might be the reason why you'll win that Brawl match.

Take for instance that 'Katrella Gobson' a Sneak Attacker with Melee Attack of 2 and has DOUBLE STRIKE. This monster is a COMMON EARTH btw, at level 1 that stat is already insane for a common monster. Not to mention that it has that BloodLust ability so if whenever it kills an opponents card, then all his stats will increase by 1. How stronk is that for a common?! XD 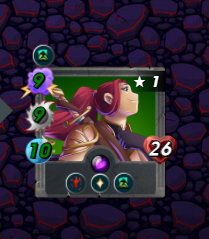 I told yaa... this card is the future of brawling ;)