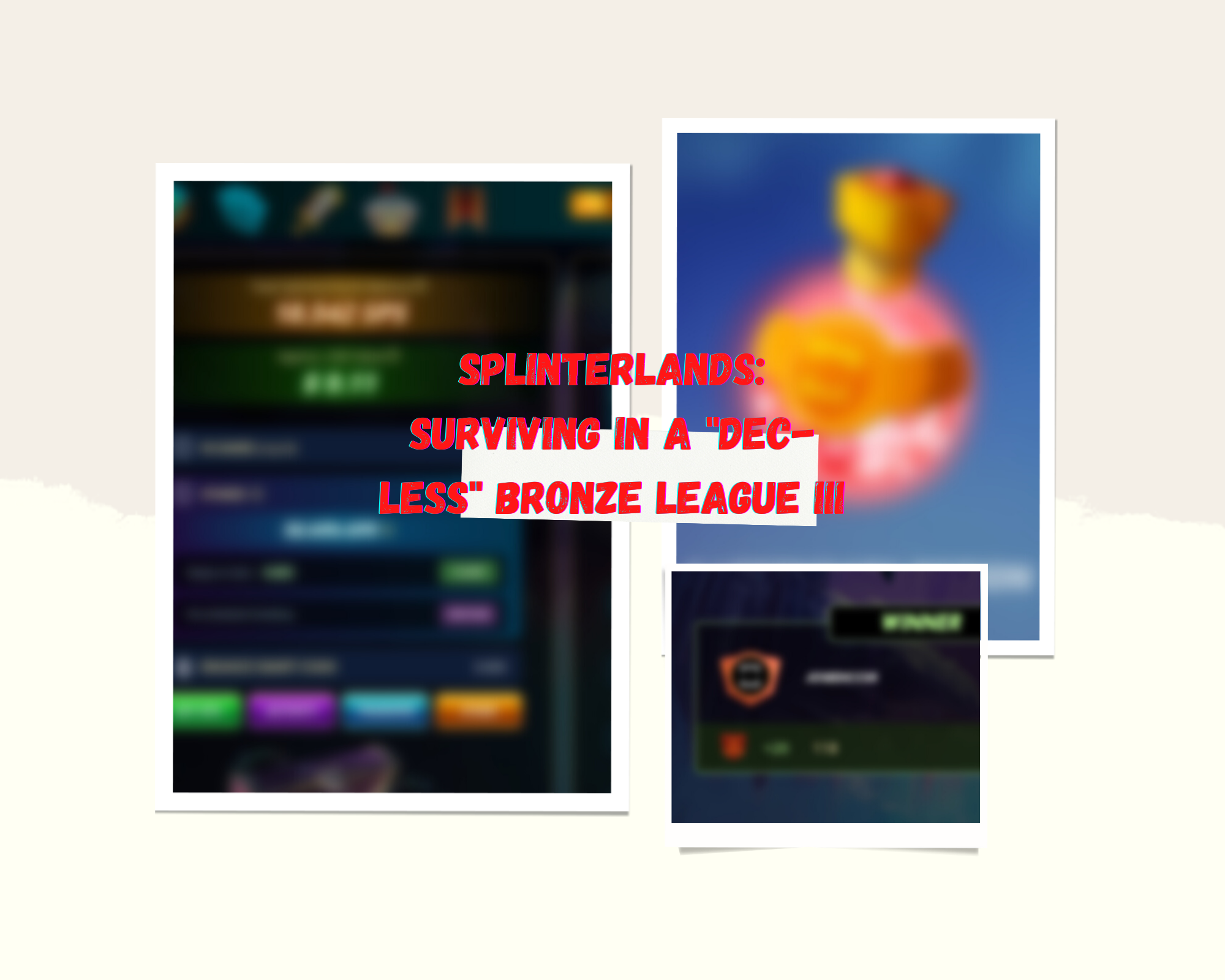 My last quest was a fire quest and here is the last game of the quest which I won to claim one legendary potion charge, which by any means, I do not know what to do with it. For a longtime I've not gotten anything other than this, except a gargoyle devil priced at 40 DEC at the moment.

For two days and counting, bronze league III no longer receive DEC for winning games, I saw the announcement and straight away, I felt those tiny DEC to new players is always a sort of motivation for the time spent knowing each of the cards strategizing, knowing the course of the game. Wasn't as if these DEC was quite much but then a persistent new player, could bring in a little investment plus their earnings too, and they could build their deck in maybe one or two years of playing.

However, I understand that this was done to curb some aspect of abuse. Of course these decisions aren't easy, governance in general isn't easy, tough calls aren't. With the promise of money comes more greed, however, I felt that some sort of algorithms could be put in place to spot a new user and a user with multiple accounts.

However, I'm not one to complain, rather I just try to look at the point of view of the people in charge. One thing I predict is, as Splinterlands keeps getting lucrative, it'll create more need for greed and greed isn't a feature of "long-term". But then, the team has done excellently well, this shows in how big users on the chain wants to throw in their massive pocket and of course earn ostentatiously.

Since people are willing to lock in their funds for more money, it shows how the economy around Splinterlands is lucrative in all aspects. There's always an incentive for holding something, and this certainly creates a value within the system.

Of course, constant changes would need to be implemented to curb abuse, manipulation and of course keep the value price wise. It's why I'll probably understand the changes, basically it might hurt new users to some extent, but I like to see how adjustability would take its course in due time.

I probably decided to keep buying, accumulating and hold DEC, in smaller quantity then stake it in-game rather than have it lie around, of course this earns me SPS daily and should the price constantly stay afloat, I might have to still use it to buy myself some cards at the end of the airdrop. One thing I've decided is to give it time, dedication and passion.

There's always this feeling that buying a spell book is all, but then it's only the beginning. If people didn't actually need to buy spell books before they began, they'll probably quit faster than they should, but then that $10 sometimes acts as retention fee, even if it's not much.

5 out of 10 new users wouldn't want to give up their $10, in fact they'll have no option but to put in extra fund to make meaning of their initial $10 investment with the spell books. This is just my theoretical aspect of seeing things, at the end of the day, I might be wrong.

However, I'm not really a daily player due to some crazy commitments I have on my hands. However, my win ratio has increased in over 7 weeks of sparingly playing the game, I've navigated through the various splinters with the cards I bought and the ones at my disposal.

One thing is, I've gotten so many ideas from different people, and it's been difficult to even know what to do exactly, the decisions to hold DEC was strictly mine, however I've been advised to spend some sizeable bucks to buy higher level monsters which isn't an option considering the inflated price.

Did I mention that I cannot rent? This is because of firstly the cost, and I'm not a daily player and this would result into a loss for me. I try to complete my daily quest and not go beyond that due to time constraints, but then, I have to increase my collection power to actually leave a DEC-less bronze III league.

I'm also looking at SPT as well, I'm looking to buy to see if I can curate contents with it, but this is probably a plan I'm hoping to put in place, from 2 to three months from now. Not only that, but I'm hoping to become involved everywhere, except for lands, it's a plan I hope to put in place in the coming months or even year.

I'm taking my splinterlands Journey pretty slow but steady, and I'll probably need to think of now strategies except playing daily quests. That said, I was thinking if I could get some players to delegate rather than rent cards to me, they'll have to state the specific time they want to delegate it to me.

(PS: I don't even know if delegation increases collection power, I'm guessing it actually does) and in other to appreciate them I can offer to send them some DEC from the one I'm holding as a form of appreciation. Please if you can, I would totally appreciate it.

Seems 1000 power to go for bronze 2 league, and around 3 dollars to buy 100 dec power value, so estimately the entry fee is 30 plus 10 dollars for a new account to earn dec, it is affordable though!

Hahaha you were brutal with the win on the battlefield there, impressive win bro.

It's can be very discouraging on newer players with the new rewards system at entry-level. Time will tell the impact of such change to the game.

The season is 2 days away, I will search through some unused cards and delegate to you in the new season at no cost.

Hahaha, I'm just getting to learn the best cards on the different Splinters, my win ratio has increased tremendously and it's better these days. I've managed to learn how to beat monsters with healing abilities.

The season is 2 days away, I will search through some unused cards and delegate to you in the new season at no cost. Keep battling bro!

No wahala, thanks a whole lot, if I could just get into bronze II ill throw in some DEC to get More cards.

Well this isn't good news for me but i thrive no matter what. I'm also not a daily or consistent player right now. I'm mostly focused on the blogging aspect and Splinterland is fun but I'll have to create time for it soon. I just want to round up with all of my pending commitments. Then I'll read and learn more on it...

Well i'm sure you can always find a way to go about it, there's always a way, but be rest assured that you're going to have to spend.

I noticed that someone already offered to delegate out some cards to you so I will let it sit for now but let me know if you are lacking just a bit afterwards. Actually I think making a few posts in the Splinterlands community and converting it into DEC or credits to buy cards might not be a bad idea. If you are out of ideas, check the weekly splinterlands challenge battle. If you don't have the card, you can either rent one or choose a different card.

Yeah i'm thinking making a few post too. Yeah I got a delagation of like three cards or thereabout, and probably i am going to be making a few posts, probably once in a week or so, hopefully I can be able to buy some cards of the post reward turns out good.

Make sure to visit the @splinterlands page and see the ongoing challenges. If you make sure to put down the link to your post and where you shared it, you may get a vote from the steemmonsters account. That should help you at least a bit.

I've got some spare cards that I could delegate to you. It should take you into Bronze II at least.

Oh thank you so much, I didn't know that delagated cards can increase collection power for the time it's active. I'll definitely appreciate.

Thanks I just needed the collection power boost, thanks for the cards as well, just let me know when you'll be needing the cards again.

Happy to and have fun battling in Bronze II and beyond.

An option for you is to rent on the days you can commit to playing. Just do a one day rental to get you to Bronze 1 or whatever league you want to get to and play as much as you can. That way you get the DEC from that league. If you play enough battles that day, you should be slightly profitable.

It's a slow process, but at least you get something for your time.

I really want to play the Splinterlands game on HIVE.

Would you recommend I give it a try now as a newbie or I give myself a few months first? @josediccus

Give yourself a few months, maybe two or three. But if you feel you have the time, definitely you can start up. You can play for fun and learn, as for the economy, you need to at least throw in some insubstantial fund at the beginning for basic investment. Splinterlands is a whole new world, be ready to be challenged.

I would definitely take the first line of this advice as I am currently juggling a lot.
Thanks a bunch!