Another week, another brawl, another top 3 placement for the @Hive.Pizza guild!

I've got a whole lot more than usual in store for you today, folks! Besides the standard brawl breakdown that I give, I've got some rewards to give out from the brawls, and we're starting a donation drive to get our Barracks to level 4.

This is a great chance for members of PIZZA 1 to support their guild, and get some Chaos Legion packs.

Well this was a first. I entered all of my teams a bit earlier than usual (12 hours before finish in this case), and not a single one of my opponents had entered theirs yet. It was really anticlimactic for me, as I was going through.

I endeavored through, without the fun of watching a single battle out of the 8 teams that I entered, and had to wait until the next morning when I woke up to actually see my results, or the guild's as a whole. As always, I was swinging for un-defeated, but I'll settle for 7-2. My only losses were to the representative of the 1st place guild, and the guild that had one of the best W:L records, but not enough players to get the points they needed to win the brawl.

The real question is, would I have done better or worse if I hadn't sprung for a bunch of rentals?

Any time I see the Holy Shield rule-set, Yodin Zaku always jumps into my mind as the first option, and in this case I was excited to go a little magic heavy as well. Of course... my opponent had all level 1, mostly starter, cards... so it was a pretty one-sided battle. I went far too top-heavy on this battle, because Equalizer is most beneficial with smaller monsters. That, combined with my opponents use of Mylor Crowling for his thorns, seemed like it was going to get the W there at first, but having my front tank with self heal, in addition to a healer in back, made all the difference. Their sneak monsters also wasted multiple turns attacking my chicken, and that certainly helped.

Well, on this poison round, my monster with Immunity was nowhere near as good as theirs.. and unfortunately that same ability stops Mimosa's affliction from mattering. It looked like it was going to be close there for a minute, but it never was. This was my match against someone from BPS, and the combination of Poison and No Healing certainly made for an interesting challenge. I decided to turn down their monsters as much as possible, eat them up quickly with Blast, and it worked out well. The bonus Cleanse from that Zalran Efreet that I rented was a wonderful addition. Lots of Blast in this brawl... I was feeling really good about this one at first, but then my Shieldbearer died way too fast, and everything was over at that point. Maybe if that No Neutrals had instead been allowing ranged to attack from the front, then I may have had a chance. at the end there, with my Kitty + Gladiator.

My opponent must have looked me up, or already known who I am, because they fled in terror.

First off, I have to say that it feels great every time I play Valnamor, and my opponent has an Alric... That instant advantage is usually pretty telling. In this case, my opponent also had only level 1, mostly starter, cards... so it wasn't much of a battle. Kraken + Healer might've been able to do it by themselves, and the full team just cleaned house.

My opponent must have looked me up, or already known who I am, because they fled in terror.

They had less battles than us.

We only had one person with a negative W:L record (3:4), and only because it was their first time in an Untamed-Only fray.

They gave us a pretty round whooping. We just keep grinding, keep getting better, keep coming up with more ways to incentivize & reward excellent play from everyone, and we keep ending in the top 3.

With this upgrade we're about to get... things are going to be getting a bit spicier on this #PIZZA!

Scroll down to see what I mean.

Rewards for a Guild Bounty

In a couple of previous brawls, the #BluePillSociety has kicked our butts pretty badly, so this time I offered a bounty for everyone who bested their opponent from BPS this time around.

This most recent placement brings our guild's Crown total to 231, just one brawl shy of enough to level our Barracks up to level 4. Since I've paid out of pocket for almost every upgrade the guild has gotten since I joined (to the tune of well over a quarter million DEC), I'd like to see the rest of the guild step up this time.

What we're going to do is have a 2-part Donation Drive to get the remaining 34,467 DEC.

First up is the competitive portion: Whoever donates the most between now and the end of our next brawls will receive 5 packs of Chaos Legion. If there are two members who are close for the top slot, I will give them each 4 packs.

Next up is the cooperative portion: If the guild donates the full amount to get to that 50k and level up the Barracks, then I will give all of our members a Chaos Legion pack - separate from the victory prizes. Why level the Barracks?

The next level of Barracks gives us a pretty great advantage over our opponents from here on out: +1 mana in all of our brawl battles!!

To the non-player reading this, a difference of 1 mana in battles may not seem like much, but it definitely is. Being able to fit in that monster that you were always just 1 shy of... it's a powerful thing. When I first read this ability, I thought it was only for Home battles at first, like 2 of the 3 other Advantages we've unlocked so far. This is SOOOO much better. 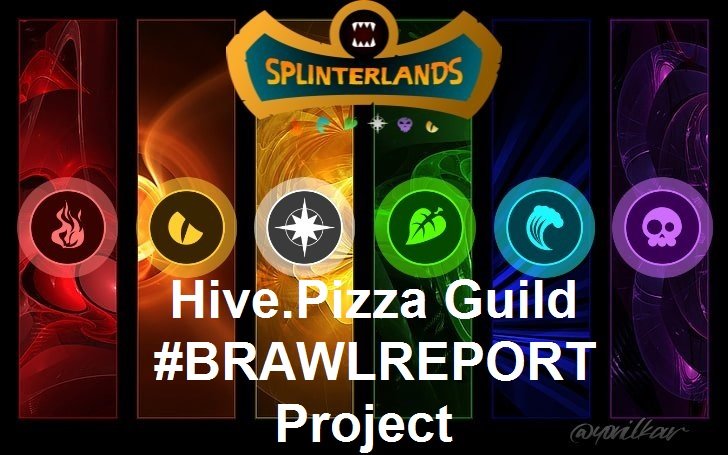 That's hilarious! I always imagined a gang of people going around (Jehovah's Witness-style) and trying to convince people that nothing is wrong in the world, that all the corruption, fraud, control, etc. isn't really there.. Just take the blue pill and go back to work.

Yeah I figure they mean to reference the blue pill from The Matrix, but I'll just keep thinking they're a bunch of geriatrics that can't get it up anymore. Trash talk is good for competition haha!

Congratulations @kennysgaminglife! You have completed the following achievement on the Hive blockchain and have been rewarded with new badge(s):

Hey thanks for the mention bro had an awesome time posting about this was shocked with our results but we are growing and doing really good in the brawls so far.

Can't wait till we get to use those gladius cards then we will be even stronger. Also, that plus 1 to mana seems nuts that will be far off from us but seems like such a huge advantage.

@anjanida 61
about 2 months ago (Edited)

Wow, I never considered "anticlimatic" being a word until now. Though I believe I can see the kind of anticipation you felt when showing these unreal battle stats. I want to repeat your graphic to exactly show what I mean:

Now to the battles. I love this report format of having insights into the actual choices we do when we play. As with battle #1 I'd really liked to see a battle unfold on your Yodin Zaku strategy against a strong Silver opponent. - Oh, by the way, what has been your fray? It's missing in the screenshot of your battle list. But yes, it is shown at the top of the battle. And now while I am there, I'll enjoy the rumble ... Well, it reminds me on my favorite strategies when a Blast rule-set is coming up, as I don't have a Yodin in my deck yet. Might be worth coming for one though. Fortunately there are only 9 available and that makes it even more exciting playing this card, I am sure.

And I am not going to tell any strategies here today, as our guilds are coming up against each other this brawl. Looking forward!

Frankly, I took a look into Yodin via peakmonsters, and it turns out that there is a lot of pressure to it. Look at this. I even saw @clove71 hitting the space, yet the card was gone for rent immediately, too. So it'll remain a surprise here what players will confront us with a Yodin. Being into this deeply here, let's skim your report so I'm sure to hit the bottom of it ...

Now thanks for the mention! Being mentioned through my own report made it much easier for me to find your report that quick, while crafting another interim report. 👍 There you go: Short interim report at the dawn of brawl 49

Trenloco reporting for duty here
Just dropped 1k to get this going , pizza`s where its at !!
!PIZZA

This is what I'm talking about! EPIC