@konaqua 66
4 months ago
Ladies of Hive

Photo by Fotis Fotopoulos on Unsplash
Edited in Canva. Gifs from Gifer.

I saw the opponent's last 4 games playing all Earth. I predicted he would still do Earth for this battle. That's why I used a monster with Void ability as the main tank, then a couple of snipers to take down the enemy healer fast.

When I thought that preparation was enough, the game came out really close at the end. Too close that I might've lost this game if my monsters did not play as perfectly as they could.

Four hundred years before the first rift opened, the first whispers of chaos brought dark beasts under a blood moon to the Tower of Azdurj. Creatures of nightmare began hunting by night, lurking the valleys and crawling on the wind.

In desperation, the acolytes of Azdurj sought forbidden tomes, long sealed beneath their tower. By the candlelight of hidden recesses within their tower's crypt, the first Necrosi were born. Forged to battle the spawn of Chaos, these bounty hunters are eager to take up the fight.
“By the light of the full moon, I first walked upon the sundered lands as a faceless brother of the Black Sign, my life as an uncloaked all but forgotten.

With glittering siphilum coursing through my veins, I saw the first shadows cast by new eyes, and my heart was full.

I had survived the transmutation and was eager to don my cloak and gauntlets, symbols of the trials I faced to take this form...and the perils of the coming Doom.” 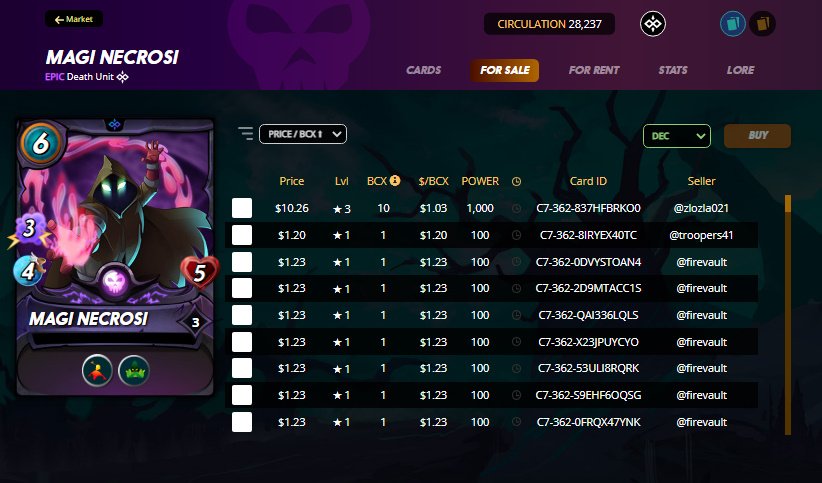 With the lowest price of $1.20, this card flies quite a lot under the radar. I think he's a really good and reliable card and should be in a lot of Death team compositions. 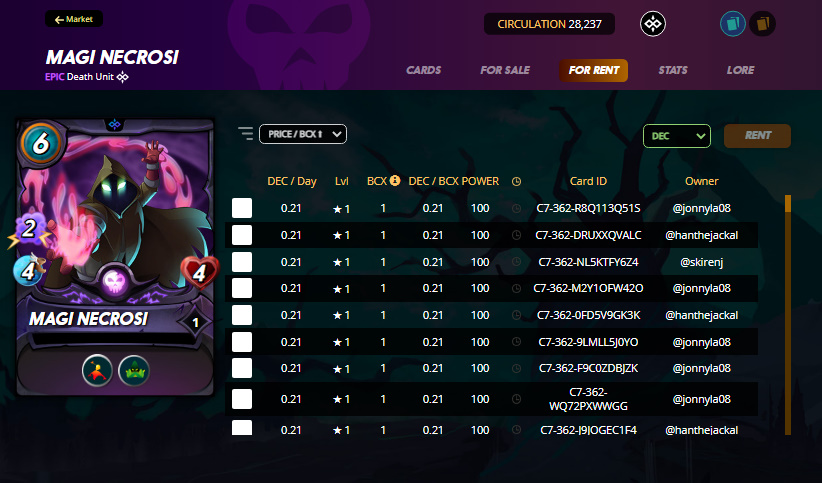 If you don't want to buy or want to have a little sample first, you can rent one for 0.21 DEC. Since rental requires at least 2 days, minimum rental for Magi Necrosi is 0.42 DEC per day which is just a couple of rental rewards from your arsenal. 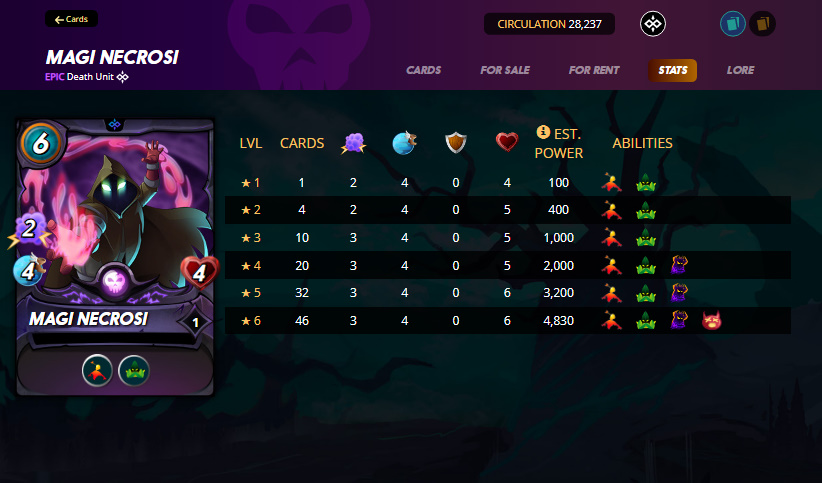 Personally, I think Magi Necrosi is really strong when you look at him as a while. The combination of his stats and abilities make him quite a strong contender. Magi Necrosi has 2 magic damage, 4 speed, 4 health. It looks weak considering he's 6 mana cost but if you add the abilities into the mix, everything will make sense.

At level 1, Snipe and Camouflage abilities are unlocked. Snipe ability with magic damage is immensely strong. This bypass the normal back line defense, "Protect," which gives 2 armor to all monsters. Magic damage bypass armor making the back line monsters hard to protect.

Magi Necrosi eliminates the "chance to hit" part since he has magic damage type. This damage type never misses which makes his attacks highest chance to activate the stun ability.

Standard Rules of Combat. No changes in the mechanics and rules of the battle.

All Elements unlocked. Free to choose any element you want from all the 6 elements without restrictions. 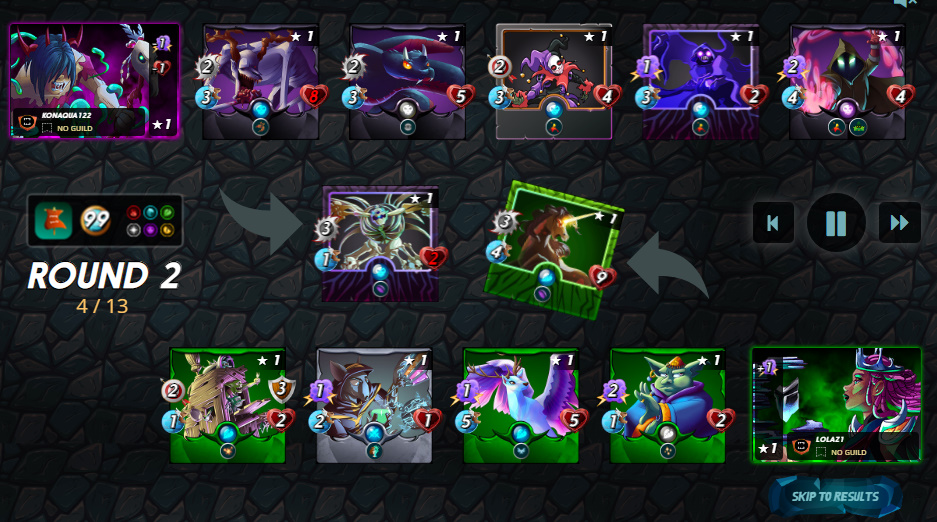 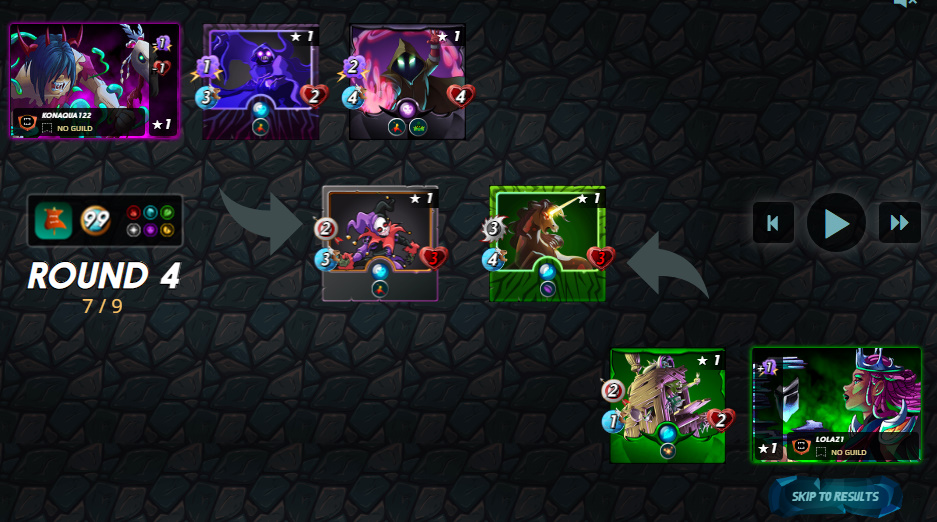 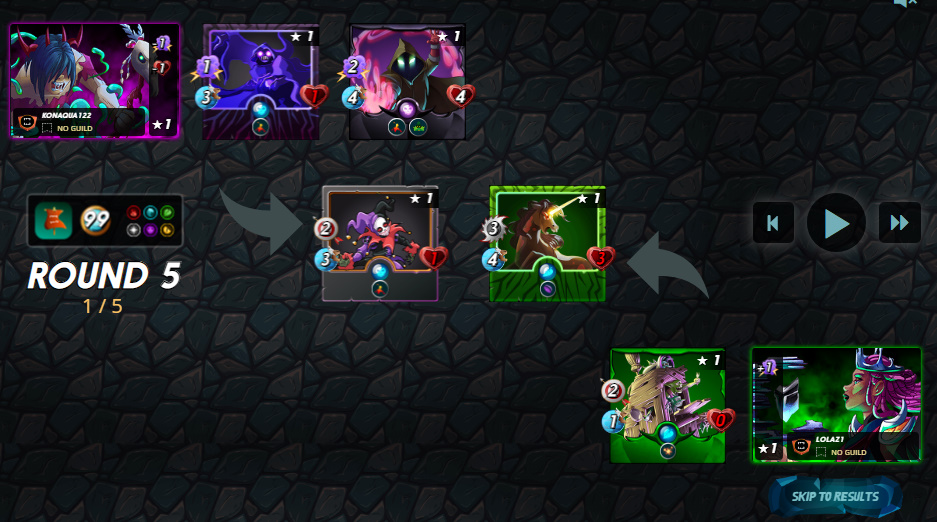 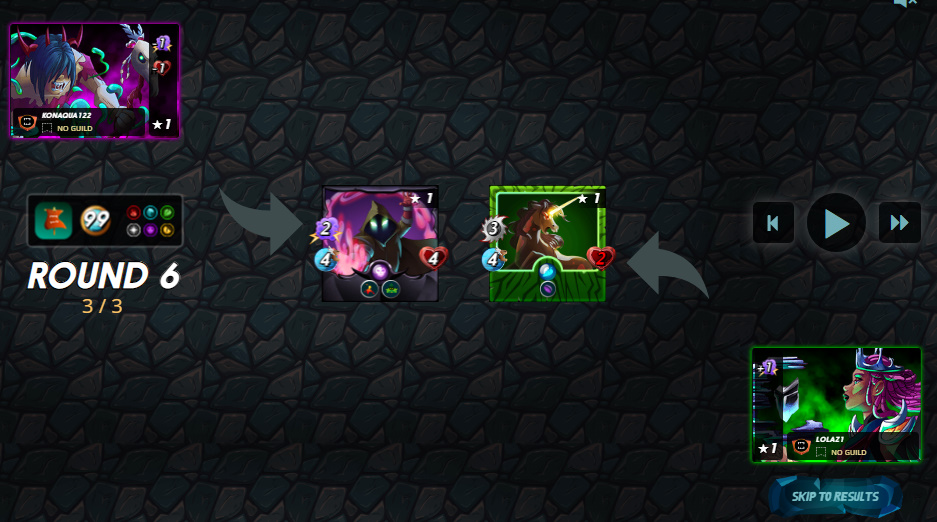 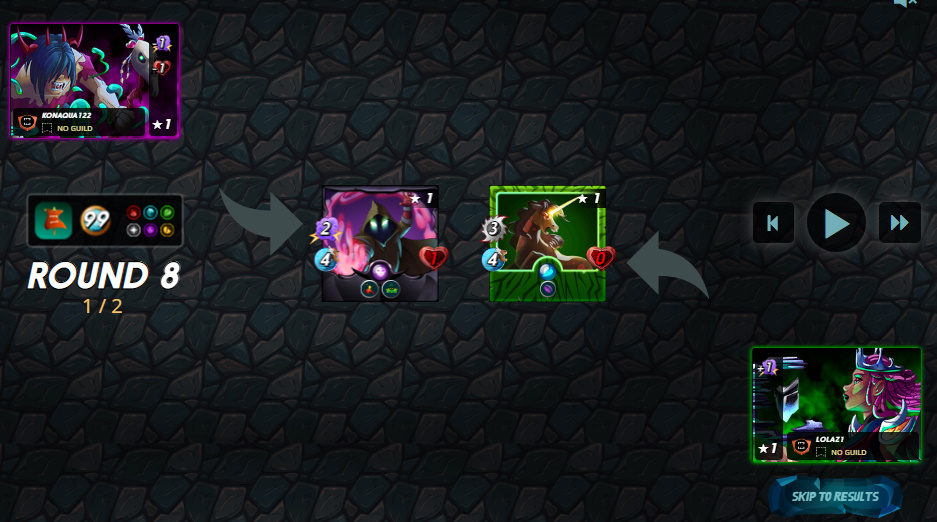 Do you like Magi Necrosi? Why or Why not?

Yes, I like Magi Necrosi's very coherent stats and abilities. Both complements each other which makes it a very powerful card. 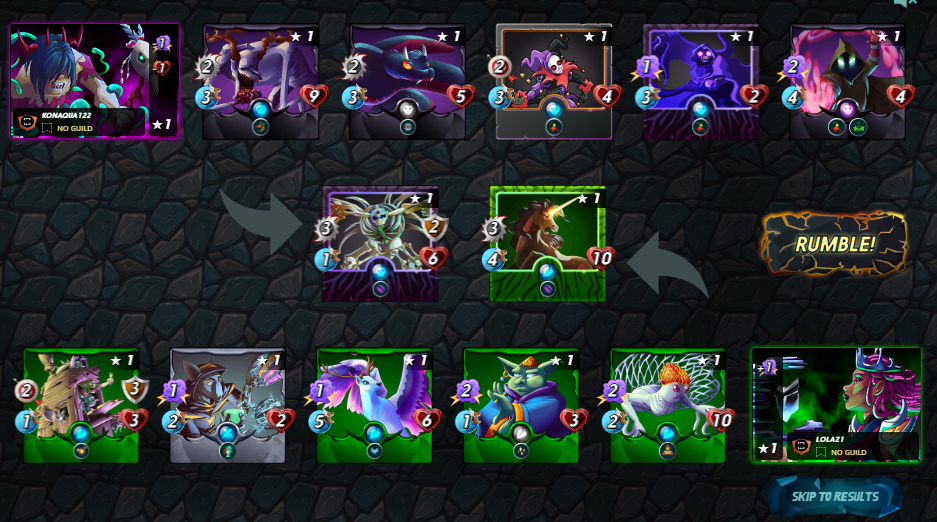 Summoner: Thaddeus Brood: I predicted that the opponent will use an Earth Team again due to his previous 4 matches. Thaddeus Brood gives -1 magic damage to all opponent's monster to negate Obsidian's +1 magic damage. He also gives -1 health to all enemies allowing my Snipers to do a faster job cleaning up.

Yes but almost. I almost lost with just being luck on my side. I ended the game with 1 health on Magi Necrosi making it a very thrilling and close match. Overall, the strategy still worked as intended.

I did a simple mistake but might allowed me to survive better. If I exchanged positions of Death Elemental and Twisted Jester, Twisted Jester might be able to attack for 1 more round making my Magi Necrosi survive at full health.

That is why proper positioning is very important in Splinterlands. 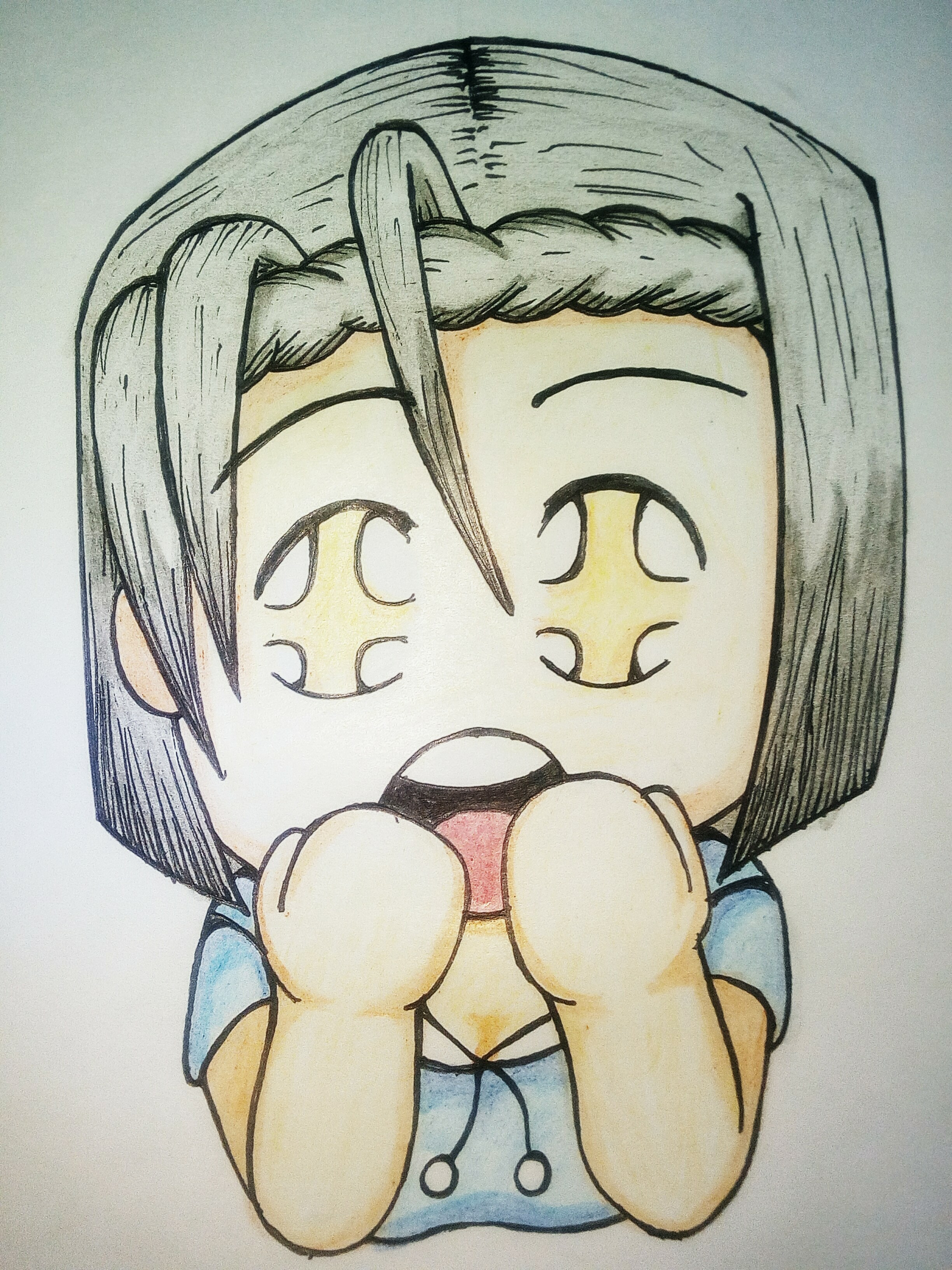 As always, thank you for sharing your game :) I wish you the best!

Yay! 🤗
Your content has been boosted with Ecency Points, by @konaqua.
Use Ecency daily to boost your growth on platform!