Technical Analysis with Summoner Lab: Splinterlands' assets on the verge of a bullish run? 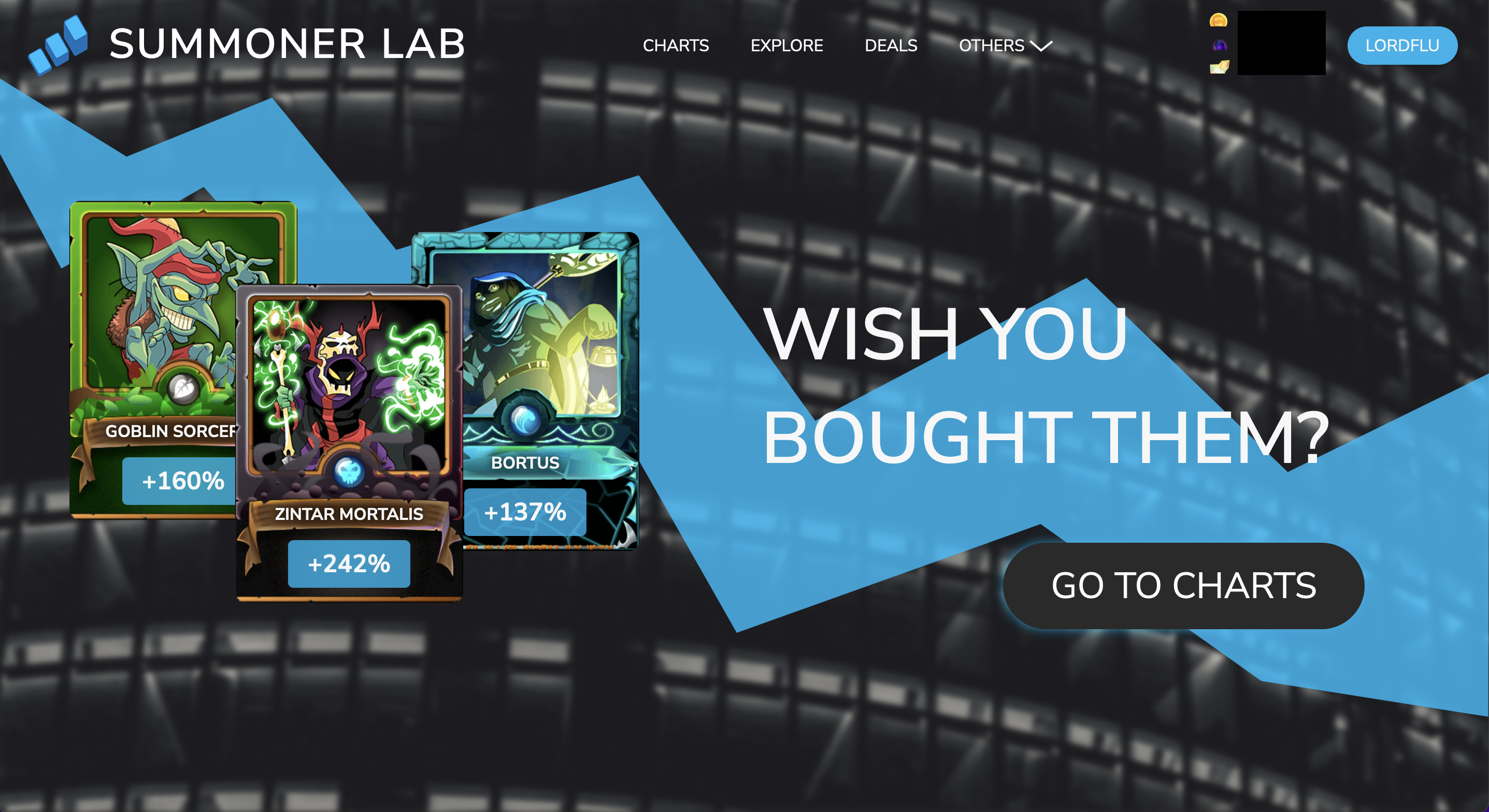 One of the tournaments I participated last week was the Summoner Lab Launch Party. The Summoner Lab is a platform developed by @muwave that uses Splinterlands' API to pull card market data and display them in charts that allows for customisation through a vast array of technical indicators. Because I ended the tournament in the 13th place, I earned a one-week period for trial of the platform (which @muwave was kind enough to extend, as I could not try it last week - thank you!). Today I'll therefore discuss some insights that come from the analysis of selected cards, coupled with reflections on fundamental events that will affect the economics of Splinterlands.

Spoiler: in my opinion, Summoner Lab is an amazing tool! It is not only functional but beautifully designed. I really welcome this development. The tool can aid many in their investment decisions. But before looking into some of the insights derived from the Summoner Lab, I make a reflection on the appropriateness of technical analysis of Splinterlands' cards (second spoiler: it is possible, but take its results with care). This is what I discuss next.

Is the technical analysis of Splinterlands' cards possible and meaningful?

The so-called "technical" analysis of financial assets - be them stocks, treasuries or crypto currencies - is controversial. Purists (probably economists) say that future performance has nothing to do with historical price movements, because what maters are the assets' underlying fundamentals and material developments that affect these. If technical analysis could predict future price movements based on past fluctuations - the criticism continues - then every trader would beat the market benchmark. An asset's price would therefore be affected by material facts and only material facts (but not to non-material facts). This is the efficient market hypothesis (EMH), associated with Nobel Prize Winner Eugene Fama, in a nutshell. As I argued elsewhere, yes, "as time goes by, the fundamental things apply", but markets and their agents are all but rational, and herd behaviour may well result in self-fulfilling prophecies: if a large enough number of agents see a bullish technical pattern and buy the asset at the same time, then the asset's price will go up. I am an economist and I understand the reasoning behind the efficient market hypothesis. Indeed, in my BA essay I tested the EMH for pure stock splits - a non-material event - in the Brazilian stock exchange, finding that there was a winning strategy in buying the asset on the stock split announcement and selling it three days after the ex-date (when the split actually happened). Stock splits also led to a statistically significant growth of the liquidity of the shares - so much so that many increased their weight in the Brazilian blue chip index Ibovespa ($ibov). According to the EMH, neither a winning strategy, nor an increase in liquidity should be associated with a non-material event like a stock split. While the EMH is a powerful analytical tool, real market are all but perfect or efficient.

And it is due to market imperfections that I believe that technical indicators of momentum and trend do offer important information of market developments. But such type of analysis only makes sense, only holds power, if the asset is liquid ("a large enough number of agents"). Liquidity is the "ease with which an asset or security can be converted into ready cash without affecting its market price". When the market for an asset is illiquid, then a single trade may determine the current market price, which may or may not be close to its real "equilibrium" price (whereby supply meets the demand). The information contained in the current market price - about how many sellers and buyers are willing to pay that price - therefore diminish with the decrease in liquidity.

This brings me to the question of whether it makes sense to analyse Splinterlands' assets - or more precisely, cards - through technical analysis. With Summoner Lab, it is now possible to do these analyses of Splinterlands' cards. But are they liquid enough for the analysis to be meaningful? The answer is yes and no. That's because there are many possible indicators of liquidity, and it also depends on the period of reference. Two basic indicators of liquidity are the physical and financial volumes an asset negotiates over a given period. I would say that many Splinterlands' cards are liquid on a daily basis: if you want to buy or sell it for a price close to the current ask or bid price, you are very likely to have your order executed in lass then 24 hours, which is particularly true the lower the cards' rarity is (all other things equal, common and rare cards are more liquid than epic and legendary), the more recent is its edition (modern editions - Chaos Legion and its reward cards, Untamed and Dice - are more liquid than wild editions - Alpha, Beta and old promo and rewards), and depending on the foil (regular is more liquid than gold).

So: is the technical analysis of Splinterlands' cards possible? For those low-liquidity cards, technical analysis does not hold - indeed, the Summoner Lab indicates there is "no data" to produce charts for certain cards - like Prince Julian (both regular and gold foil). But for the more liquid cards, the answer is yes with a pinch of salt: some cards are liquid, but currently negotiated for their in-game utility more than for their financial value. There are some people (and their bots) that flip-trade cards, but most of the liquidity comes from people who want a useful card or needs collection power (CP). The swings in prices depend more on the supply (cards printed and in circulation), which in turn is what determines its rarity, and on the demand for the card based on utility. That said, I do think we can see some interesting technical patters emerging when we look at the charts on Summoner Lab. let's look at these.

For this analysis, I decided to look at the charts of five very useful cards - indeed, some of the most used in the recent seasons, according to the analysis by @jacekw:

My set up here is much simpler than in my analysis of bitcoin prices, for which I use many moving averages, stochastic indicator, and Fibonacci retracements. For Splinterlands' cards, I used candlestick prices (even though I don't think candlestick is quite useful here), volume, relative strength index (RSI) and relative volatility index (RVI) (all with my calibrations). What I'm looking is not whether those indexes reached an upper or lower threshold or surpassed a mid-level: I am looking for trend divergences - whether one indicator is moving upward while other(s) move downward (or vice-versa). 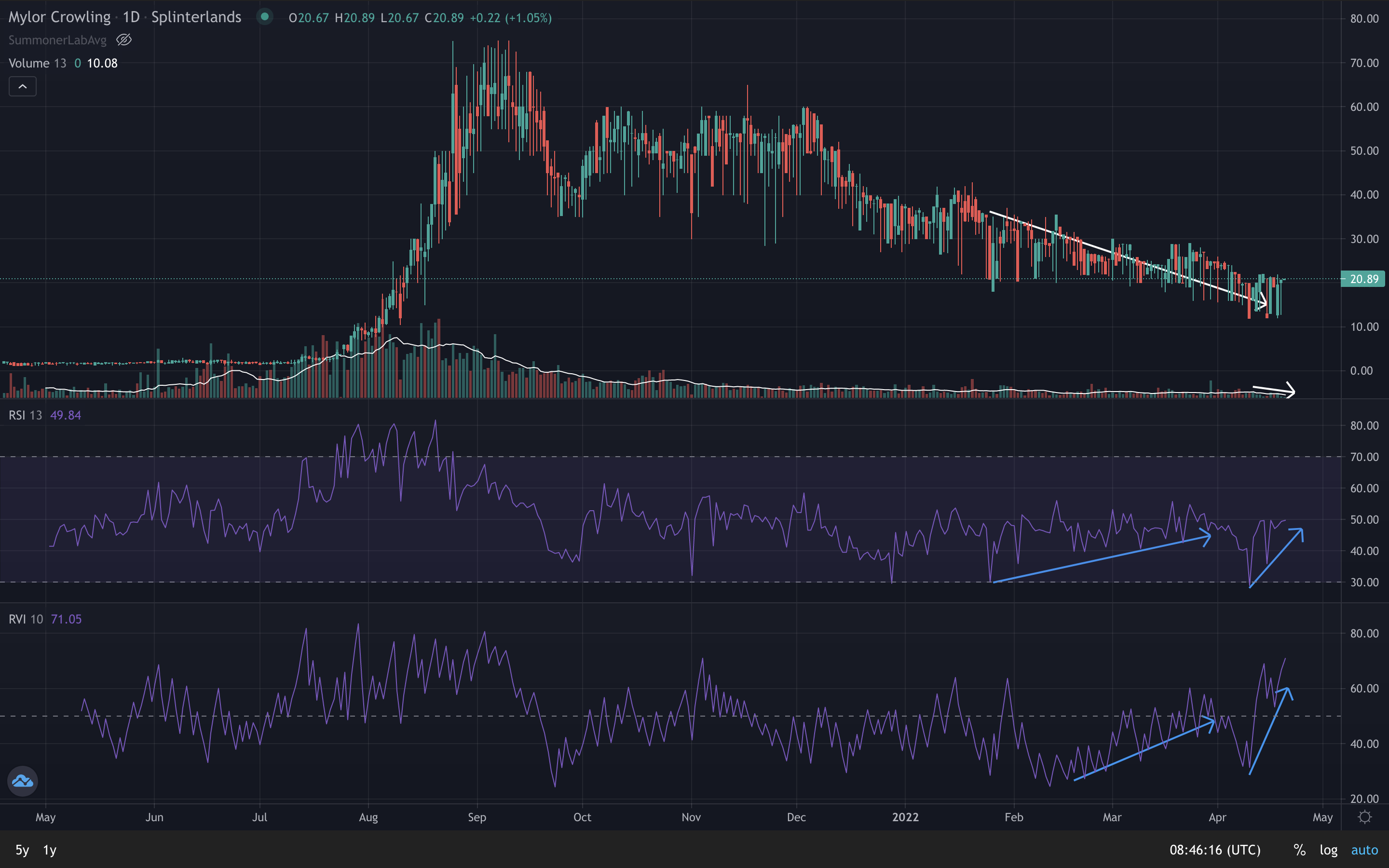 In the past 24h, 15 1bcx cards of Mylor Crowling were negotiated (you can see this information on the Explore table of Summoner Lab), and the bid-ask spread is currently $2.747 or 21.0% of its market value of $13.06. Note that Mylor is not very liquid, as it seems.

That said, Mylor's prices have been on a down trend since September 2021, which accelerated in December 2021, coinciding with the launch of Chaos Legion. We do see a few divergences in the indicators:

We could be on the verge of a trend reversal, with Mylor prices moving upwards in the coming weeks. 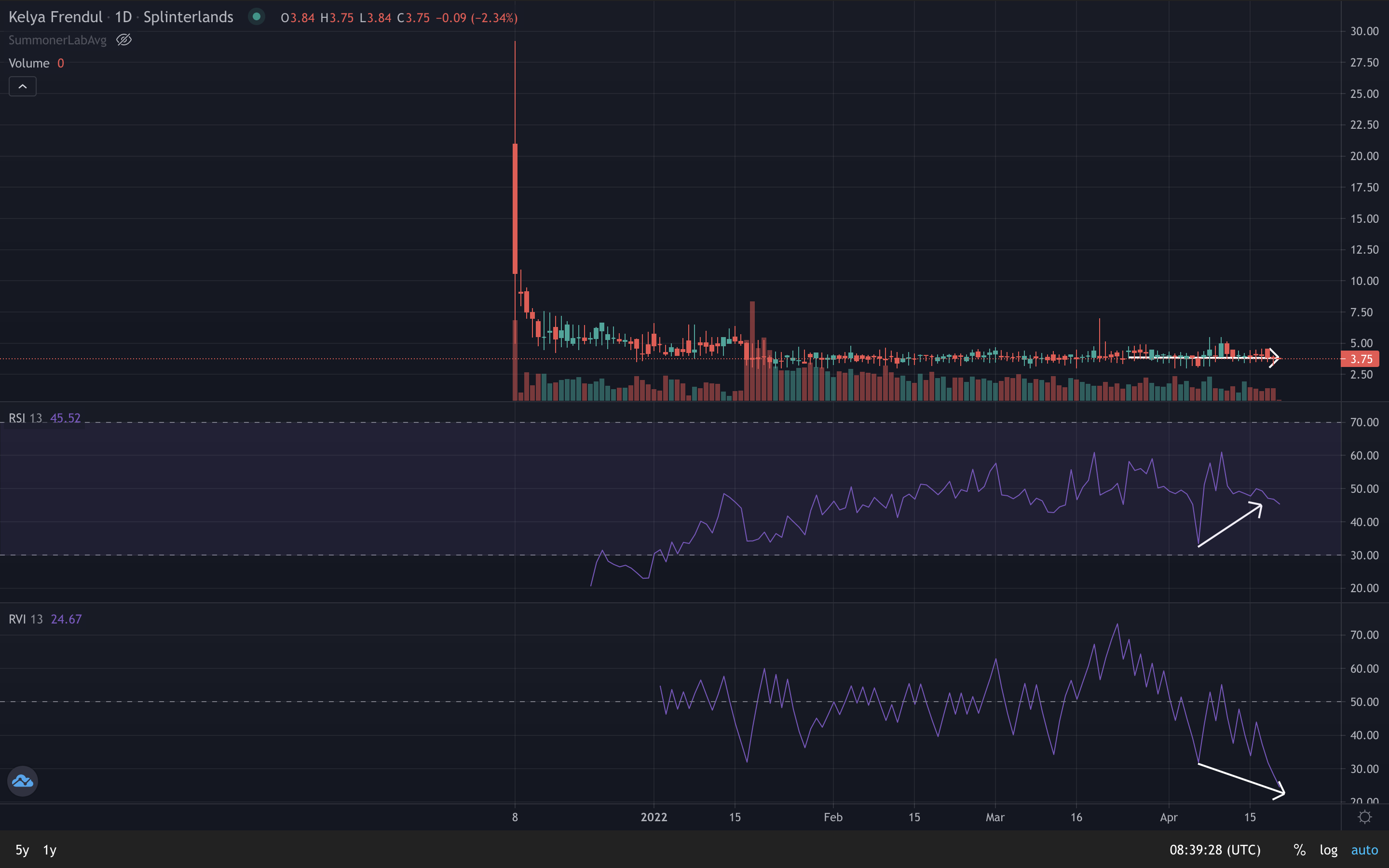 The indicators for Kelya Frendul are divergent, but we may not draw a clear conclusion yet.

I believe that what still weights on Kelya Frendul prices is the increasing supply, with many packs being opened and still to be opened. Yet, some fundamental developments may influence demand and diminish the over-supply (see below). 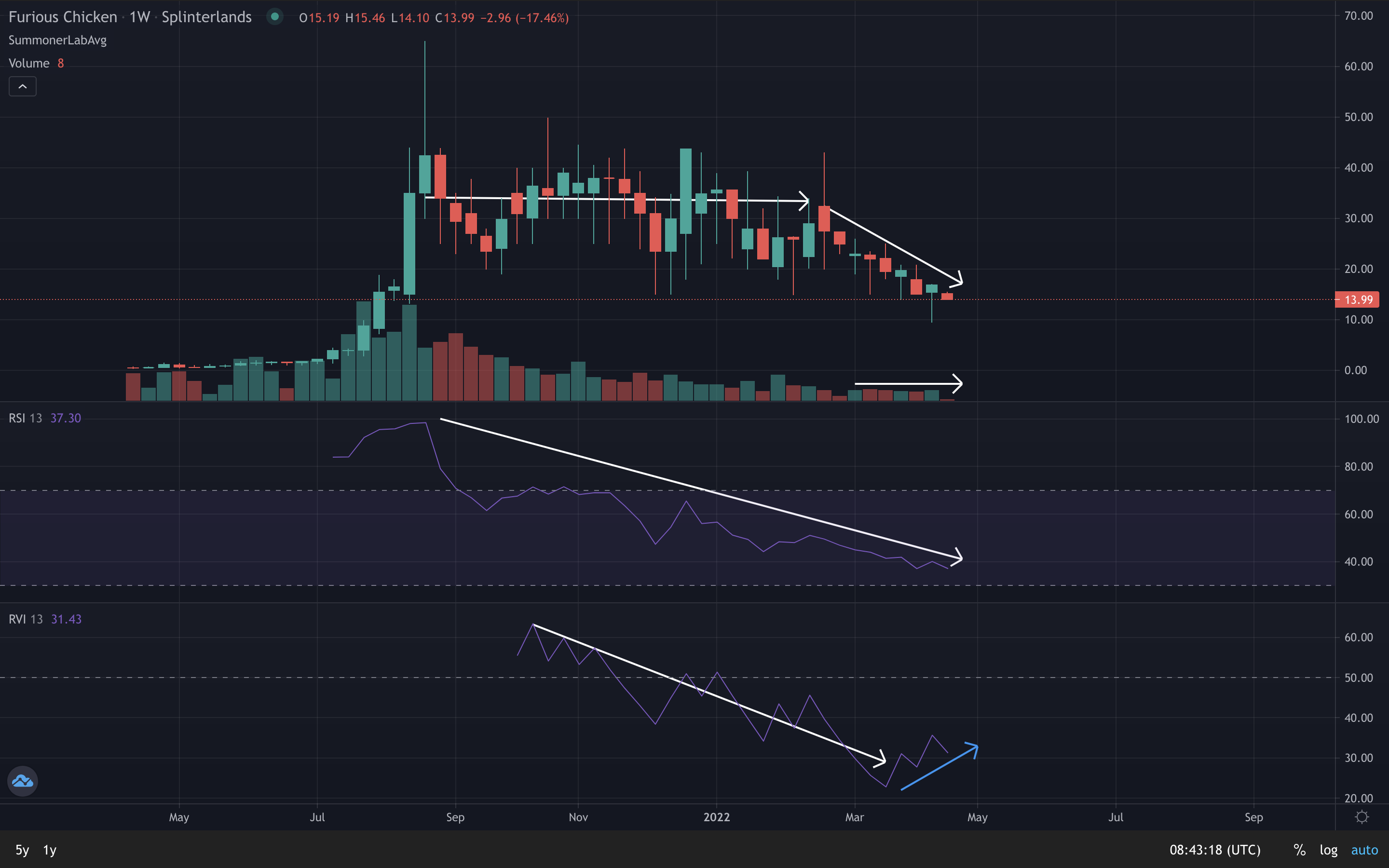 For Furious Chicken, I'm showing the weekly chart. We do see a divergence, but most indicators seem to point to weakness in the prices:

Furious Chicken is a curious card, because it is very expensive for a rare card. This however does make sense as it is the most used in the game. Its recent fall in prices may have something to do with the availability of new zero mana cards from Chaos Legion - indeed, I expected it to have fallen even more sharply.

Because RVI is the only indicator diverging, and because of fundamental developments (see below), I still don't bet in a trend reversal for furious chicken. 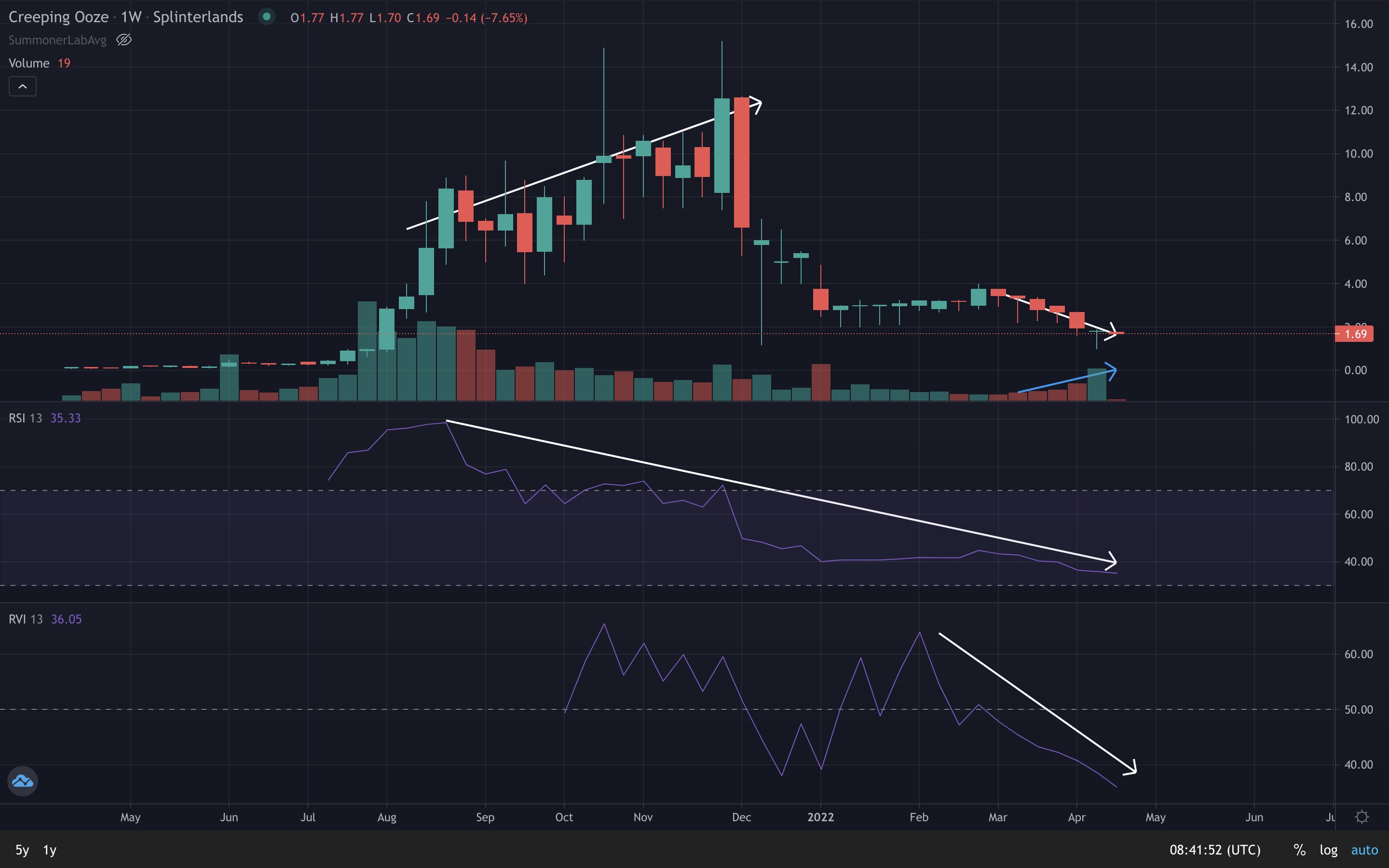 For creeping use, I use again the weekly chart. We don't see a big divergence here:

Why I say it's not a divergence even thougb volume is pointing up? , Because when volume increases in a down trend, it tends to reinforce the importance of this trend: agents are buying for ever lower prices. This process may lead to a reversal later on when there aren't more sellers for the lower prices. *Yet, I don't see it happening in the short run. 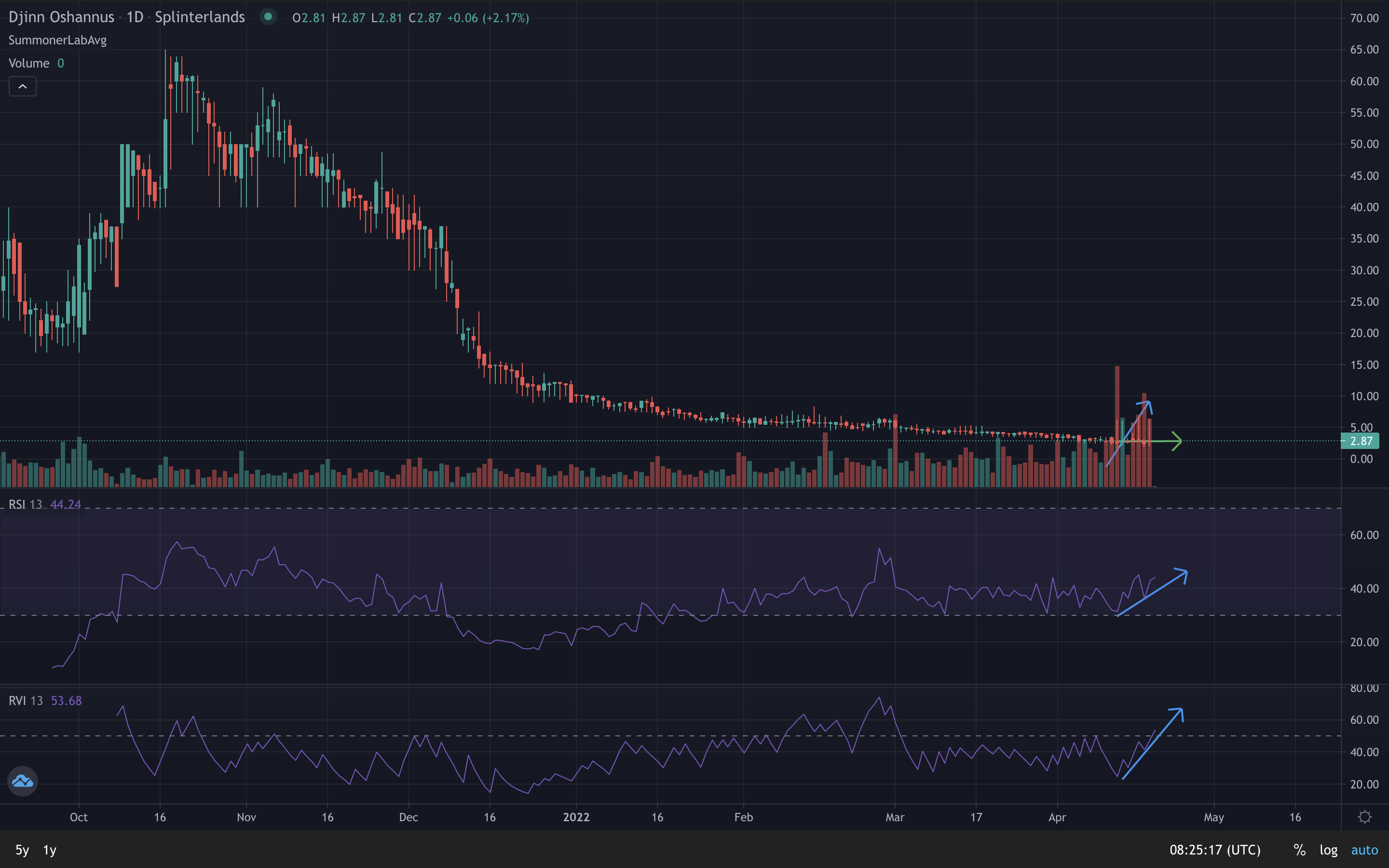 In the past 24h, 630 1bcx cards of Djinn Oshannus were negotiated, and the bid-ask spread is currently $0.308 or 10.2% of its market value of $3.014. Oshannus is the most liquid card being analysed here (and indeed the most liquid legendary card in Splinterlands).

In this daily chart for Djinn Oshannus' prices, I removed the first bars, as they distort the chart (on the first trading day, a Djinn Oshannus sold for $400 - and people complain they paid $40 in October 2021...). We do see important divergences:

I believe we may have seen a floor for the Djinn Oshannus prices. I would not be surprised with a trend reversal in the short run, especially due to fundamental developments (see below).

While "technically", there are some signs that the prices of Splinterlands' cards may have bottomed, it is crucial to consider fundamental developments (Splinterlands' roadmap below gives us important clues) - some of which are positive for prices (both sale and rental), while others pose risks: I believe the greater risks are not related to the game developments, however, but to outside developments in the economy and financial markets. Those negative risks are:

And if you want to start playing Splinterlands, you can use my referral link to register: let me know you did it and I will send you a gift card if you buy a hive account "spellbook" (needed to hold assets as an alternative to creating a hive account elsewhere).

@skuration 55
8 months ago
Thank you for sharing this great content, You have been manually Upvoted by @skylinebuds