After the trial I've done on myself, let's start with the first real interview,! The subject is Splinterland's player and Twitch streamer @ForeverAverage. He is the first person I'm interviewing and I am really excited to start with him. I first found him through Twitter giveaways and so I followed him during his Twitch's raffles (I won a Lava Launcher for my birthday, fortuity). I immediately thought about him for my first interview.

You can find him on Twitch here: https://www.twitch.tv/foreveraverage
Usually every Tuesday and Thursday around 7 PM CET for raffles, giveaways, live battles, and fun chatting.

You can also find him on Twitter: https://twitter.com/ForeverxAverage
And you can find him on PeakD here: https://peakd.com/@foreveraverage

Now, the advertisements are over, the short introduction is written, we just have to start the interview, the subject is: ForeverAverage 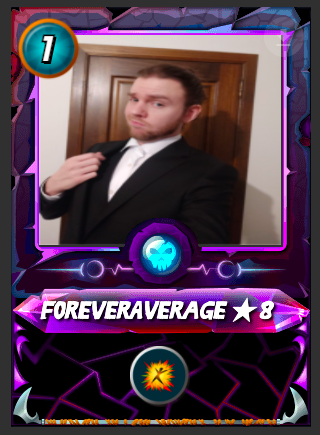 Look at the elegance...why are you not following him yet?

I used to manage an esports LoL team, NERV esports. The guys would often laugh about my skills in comparison to theirs, as such ForeverAverage seemed proper. Further, we have a saying in Flanders: “dat bekt lekker”. Which you say about something that sounds nice and easily rolls off the tongue, I think ForeverAverage easily checks that mark.

4 ) Where are you from/where do you live?

I’m from Belgium and currently live there as well, in a cozy city called Mechelen to be more precise. In March/April I’ll move to Finland however. 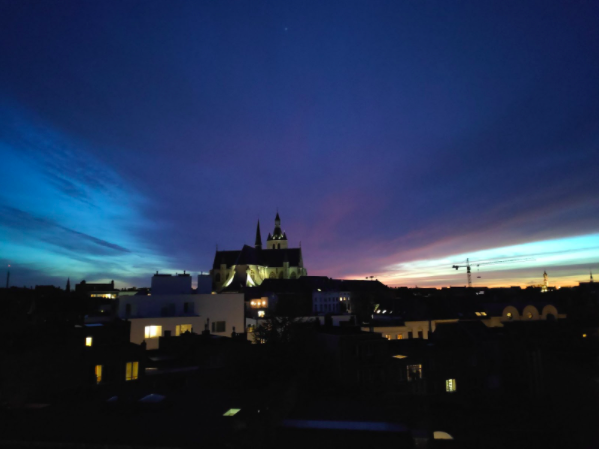 I want to say PHP Developer by day, superhero by night. But let’s be honest, the night is when developers do the majority of their work.

6 ) How did you find out about Splinterlands?

From the launch, though I didn’t participate in any of the prelaunch/alpha presales. It wasn’t until Beta that I started playing the game.

7 ) Since when do you play Splinterlands?
Beta, 2018 I got referred by a friend @ciderjunkie, who went by bembelmaniac back then.

8 ) What is your favorite element?

I’m most keen on Death. I don’t have the highest win rate with death but I like the strategies behind debuffing your opponent’s cards instead of just buffing your own. It forces you to try to think one step further, a bit like chess.

9 ) What is your favorite ability?

It’s funny but I don’t have a single card with redemption. But I like the ability the most, I’d love to see other effects getting triggered when a card gets destroyed. 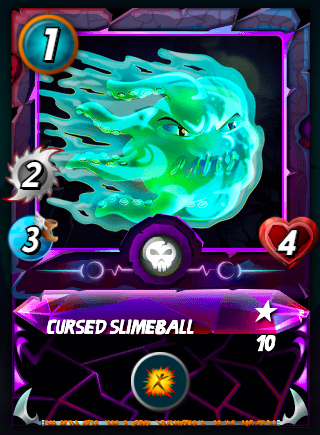 10 ) What are your “old” and “new” favorite cards?
My old one is probably Ruler Of The Seas, back in simpler times you would just need one glimpse at the card to understand that the card is a strong win condition
From the new ones I could say Blight, but I feel that Blight is the “easy” answer so I’m going to go for Quix. Defeating a Yodin with Quix feels like an amazing outplay. 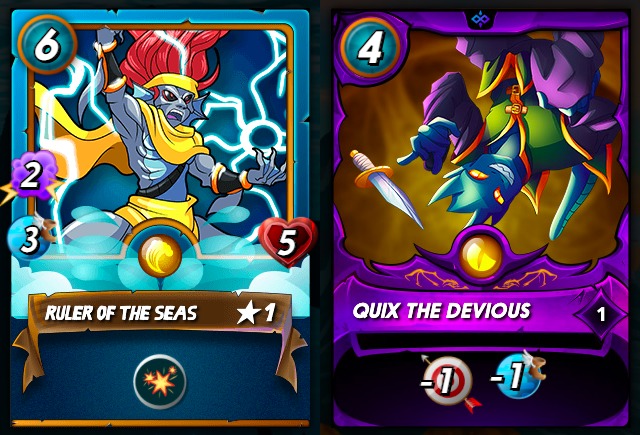 11 ) What is your favorite memory of Splinterlands?

Probably when I drew the golden Kron. We’re talking about 2019 here and I’ve never gotten a golden legendary before that. The card wasn’t worth as much as it is today. It was worth around 200 dollars and went lower in the months to come. But it was the first truly amazing thing that I drew from a booster. Back then you didn’t play Splinterlands because of any financial reasons. You played the game and bought the boosters because you were trying to build a collection and become better. Pulling that golden Kron took me instantly back to when I was 11 years old buying my first Pokemon boosters, a priceless feeling. 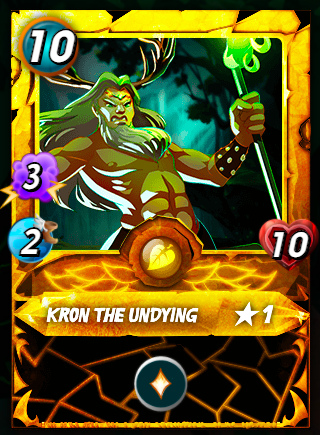 There are so many projects on the table that it’s difficult to say. Lands are going to completely change the game experience, or so we have been told a few times in the town hall meetings at least. Further, we have more SPS use cases incoming, and the Modern/wild format is going to unlock a whole new experience as well. I’m excited about what’s to come for sure, but I have to admit I became wildly less bullish in the last few days/weeks. Not because I don’t believe in to project, on the contrary, simply because it’s becoming very hard to predict the state of the game in a year from now and which cards/synergies will become the new meta.

This is a hard, but fair question. You know, Splinterlands is a very fast-paced auto-chess type of game. However, there are no rounds where you can adjust your build, buff up some cards etcetera. There is only that one round where you make all decisions and the gambling factor is higher than in other strategy games as you mostly guess what your opponent is playing. It works because you can quickly jump into the next game, but it does make it tricky to co-op/stream the game because the part which you try to keep hidden from stream snipers is basically the full game. Additionally, because there is not really any pivoting and the results are generated on the fly it’s a difficult game to give feedback to.

I do have hopes for a better future. Though let me be clear, Splinterlands is not a bad game, it’s just that the mechanics make it a difficult game to stream. Luckily the Splinterlands cards’ stats are very generic (not taking the effects of certain cards of course). And I do mean generic in the best way possible. The cards can easily be fitted into new games. I’d love to see a game like Hearthstone’s Battleground. Games where in between turns players can make micro-decisions which at the end of the game all add up, that’s where the true potential of Splinterlands lies in my opinion, as well as its is future in ESports.

14 ) Do you have some spoilers about your future projects on Twitch/SPS/Hiveblog?

At the moment I’m quite keen on amping up the quality and quantity of my streams. I just got the overlays done and I’m now looking into the direction of some vocal exercises, even if it’s for just a few minutes a day. I think that the bottleneck of every stream is the streamer itself. It might sound silly but it’s something that you easily lose sight of, when I had a bad stream I’m genuinely upset afterward. It’s a weird sort of feeling where I felt like I just wasted everyone that checked out the stream’s time. Luckily the community is really supportive and the other streamers are always there to support you. I really look up to these people, they are always helpful, and just watching them stream is super helpful to become a better streamer yourself.

Since that is my main focus I haven’t really checked further than what I’m doing now. I do hope that I’m able to further grow the channel and maybe attract the attention of some other projects for partnerships. I’m more than happy to collaborate with projects as long as it looks fun and everyone gets better from it. 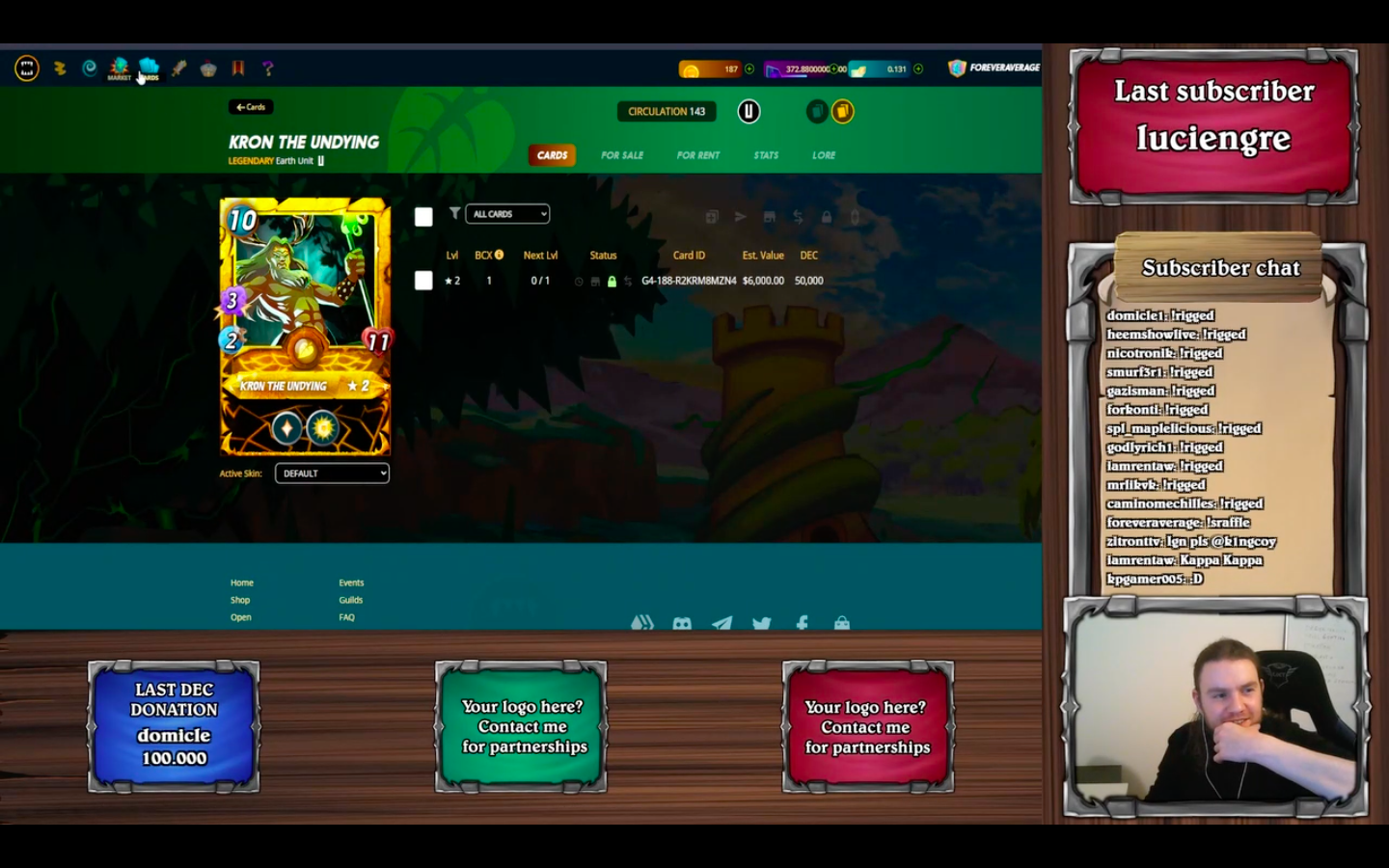 Great improvements since the first time I saw his stream in the stream graphics, there's only one way: passion

I want to thank the whole no sleep gang streaming community, as well as my viewers, both the lurkers and chatters, my subs, and everyone else that helped me build this channel. The growth has been absolutely amazing these last months but I want to be clear that we did it together. And I hope we can keep building this community in the time to come.

It was my first interview, I would thank again the super kind ForeverAverage for answering my questions the day before his wedding, yes, he is that kind. Hope you all enjoyed this interview as much I loved to prepare and write it.

As this is my last post before Christmas, I wanna wish you all merry Christmas (if you celebrate it) and happy holidays!

P.P.S. A special thanks to @monstercrusher for whitelisting me.

I truly enjoyed helping you out with this @magalli. Thank you for having me :)

Thank you for your availability and kindness. It's always a pleasure interacting with you, see you soon on Twitch!

Thank you so much :)