Welcome! I am pleased to present yet another fiery battle you should study to get better at playing to earn! 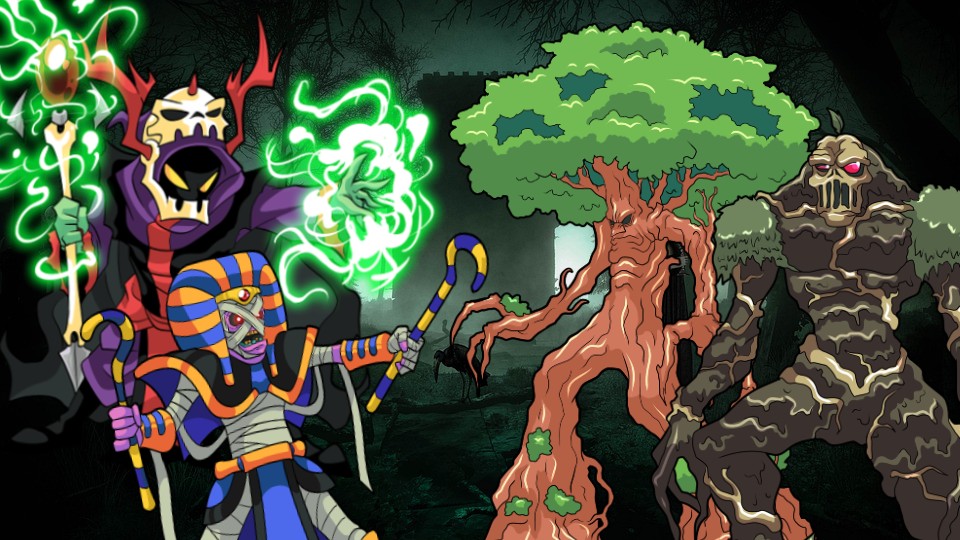 This episode's battle was fierce Today's match caps at 14 Mana. The only splinters available are the Fire, Earth, Death and Dragon splinters.

My defense was made of Chaos Agent, Brownie, Earth Elemental and Swamp Thing.

There's always the off chance that Chaos Agent dodges an attack. It didn't happen, but it still tanked the strongest enemy attack, which came from Haunted Spirit.

A job well done from my first line of defense. Brownie died quickly after, but both of them were very useful.

Earth Elemental is an incredible 3 Mana tank in the Close Range rule, comparable to Hill Giant or arguably even better.

It'll start attacking from far away, heal itself once it's tanking and stay unaffected by Thorns and Magic Reflect. It's a safe and enduring option. Swamp Thing has a lot of health too, but if its Weaken ability takes priority, so I placed him in a safer position than the rest of my frontline.

When it was his turn to tank attacks, most of the opposing team had already been easily decimated, partially because of its Weaken ability.

Although Earth Elemental was mostly a defensive option, it deals as much as 3 damage per attack before being defeated, which is actually the highest damage on my entire team.

Also, since I hadn't positioned it right at the front door, Earth Elemental could get a few strikes off.

Swamp Thing can be considered an offensive unit despite mostly providing support because 2 damage for 2 Mana is incredibly effective during such a low Mana battle. He's as good as Naga Assassin. Acid Shooter isn't quite the same as a regular offensive attacker despite dealing 3 damage per attack and costing only 2 Mana.

His Scattershot ability gives my team a chance to strike at a critical spot on my opponent's composition. He actually performed that action perfectly, taking out Undead Priest on the first Scattershot attempt. That was gold!

Last, but not least, Naga Assassin might feel like a pretty standard pick. 2 Mana for 2 ranged damage.

This isn't the case, however, because her very high speed combined with the Backfire ability grants my team a chance to prevent Sneak Attacks, which are common in low Mana battles.

Naga Assassin also doubles her weight in case everyone else in her team died, because whoever attacked her as the last Monster standing still had to beat her Backfire ability, guaranteeing a huge advantage against the last or couple last enemies.

As long as they're not magic damage Monsters, of course. This is all specially true under the Spreading Fury rule in case she survives the first punch thrown at her.

My support monsters were Brownie and Swamp Thing. Getting the first attack in didn't matter much this round, but it often does, so I can't regret choosing Brownie.

As far as Swamp Thing goes, it was thanks to it that Undead Priest died in a single shot from Acid Shooter, so that was a brilliant pick that made a lot of impact.

Overall, the battle was fierce, but it still felt like it ended in a flash. @indiaunited 63
about 1 month ago

Have you some advice for new player that are starting now? Maybe someone that don’t want to invest his money in the game?

Hi. @stewie.wieno Thanks! A way to start without investing a lot is to post content about the game like I do and then use HIVE rewards to buy cards.

@poshtoken 78
about 1 month ago