I can not believe this is already the end of two seasons with the new rewards system. In any case a quick review of what I earned for the season with a 55 chest and ending at Gold I league. 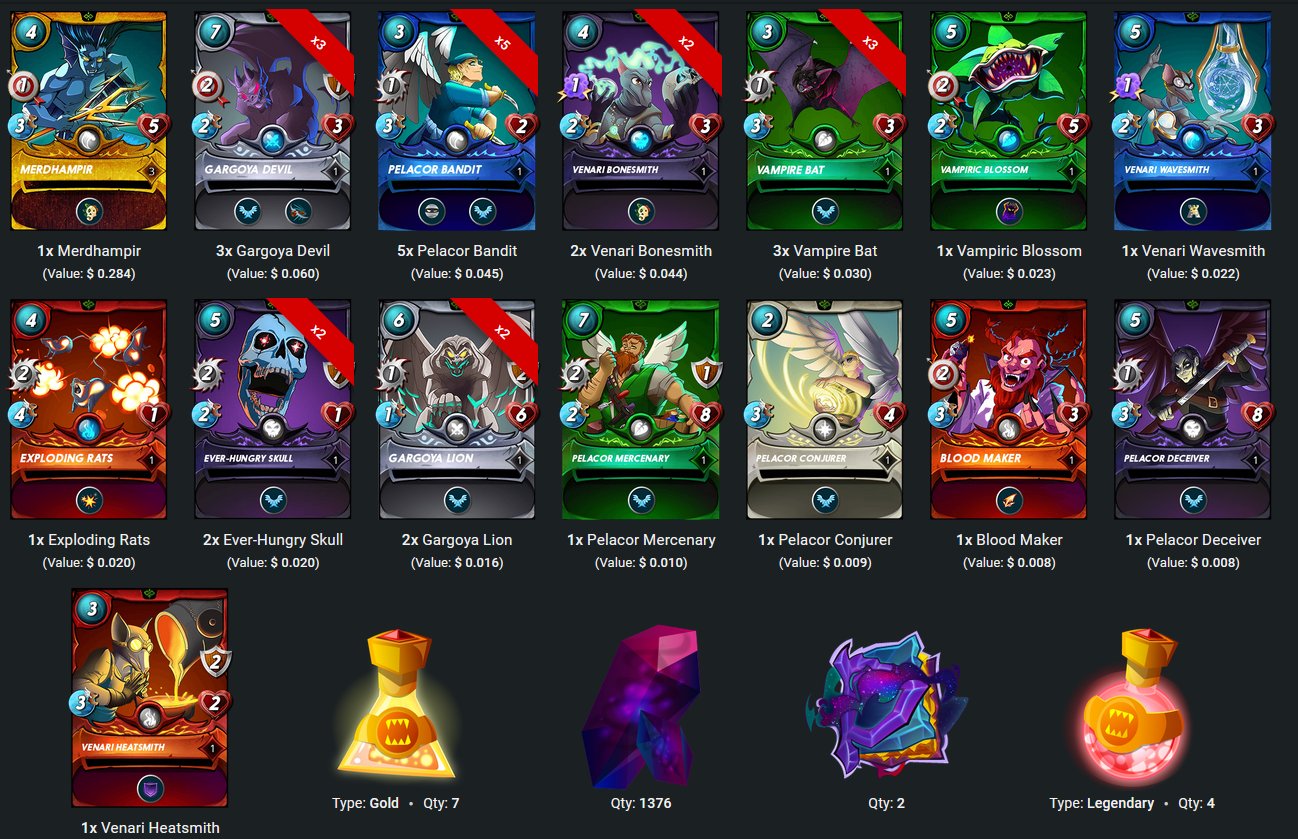 I was a bit surprised that I did not get any better than a rare card even with 55 chests. On the other hand had 1 gold foil so it was a decent season for me. However I am very jealous of other players as I seen them pull some amazing cards and boat load of DEC.

Speaking of DEC I gained over 1300 DEC for the end of season rewards and added two more Chaos packs. Now I have a total of nearly 184k DEC and 14 Chaos packs. All my packs were won and I remain to holding them to squeeze out the extra points I can get from final days of SPS airdrops.

As noted earlier I had enough points to get into Diamond but forget to accept the move up in league. However for the season I ended ranked 1735 in gold league. I have been closer to top 1000 but now fallen pretty far back. I also did not have as good of a win to loss ratio as it was close to 1. In any case I played less in this season than previous so hope to change that in future seasons.

My DEC earned in battles are quite frankly near an all time low as this past season I total just barely under 1k DEC. However the daily reward chests are pulling in a bigger amount which made my accumulative amount of DEC earned for the entire season close to 9.7k DEC. This appears to be one of my best yields in DEC through playing.

Rental market remained pretty steady as I was able to collect a little over 55k DEC for the season. It appears the rental market is still popular considering I still had most of my top level cards available to compete.

A decent earnings for the season but I put in greater effort in playing as I records show I played over 600 matches. I hope to remain very active as it seems the daily rewards have a lot of potential to pull in a decent amount of DEC. On the other hand I should also look into my rental cards to see if I can pull in a bit more passive income to surpass in total what I have earned in any seasons I have partake in the game.

Look forward to another grand season and will likely continue stacking DEC as of now the price of DEC is below par and I do not want to sell the token at a lose when they should be closer to $0.001 each. Now how have you guys being doing in the past season?

It's a lot more fights compared to the previous system but I don't think the rewards are that bad. Even if all else fails, you should still get a decent chunk of DEC for your chests.

Don’t get me wrong. I think the rewards are good but I wanted even better. Seen other players get over half a million Dec is just awesome.

Yay! 🤗
Your content has been boosted with Ecency Points, by @mawit07.
Use Ecency daily to boost your growth on platform!


Don’t you hate it when someone answers their own questions?
I do.
Credit: marshmellowman
@mawit07, I sent you an $LOLZ on behalf of @gillianpearce
Use the !LOL or !LOLZ command to share a joke and an $LOLZ
(1/4)
0
0
0.000
Reply


Why did the rooster cross the road?
To prove he wasn’t a chicken.
Credit: marshmellowman
@gillianpearce, I sent you an $LOLZ on behalf of @mawit07
Farm LOLZ tokens when you Delegate Hive or Hive Tokens.
(1/4)
0
0
0.000
Reply

Nice rewards you have there! ~@clove71