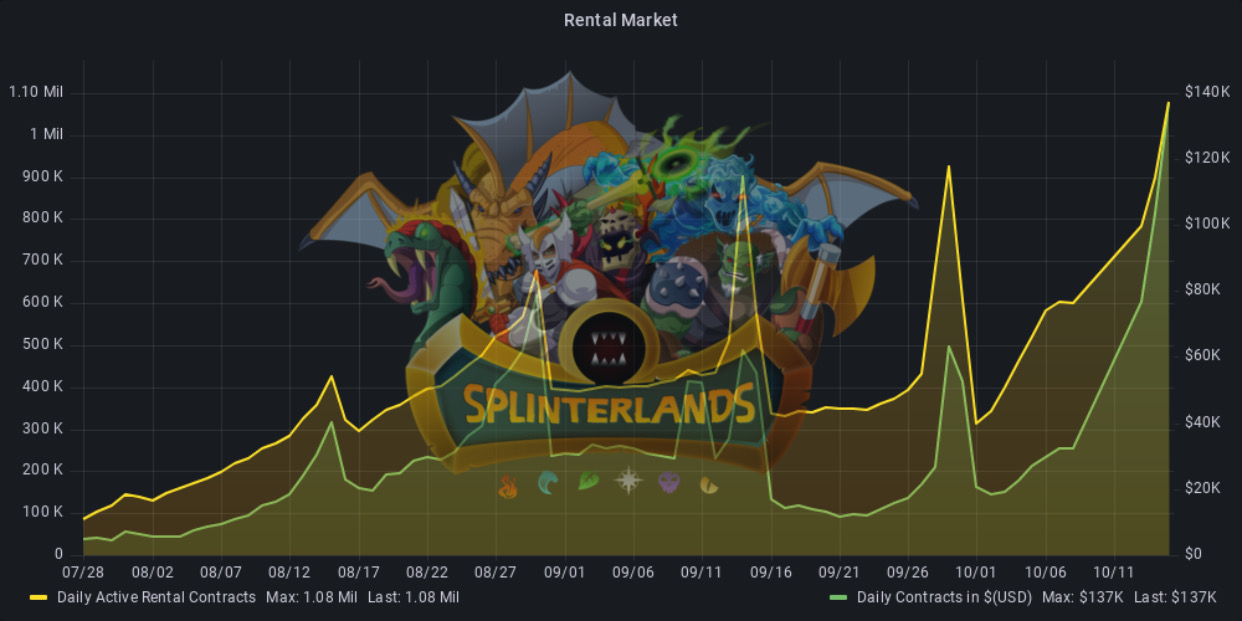 Rentals on Splinterlands are booming like no mans business and I’m loving it!
I made $20 from a one time rental of one of my Splinterlands cards over night. The last day of the season is known to be the most competitive and players want to rank the highest while raking in tons of DEC from battles. As a result of this, the rental market is always booming around this time.

Thanks to the high price of DEC, my Gold Foil Legendary Dark Haon was rented for 1350DEC which was approximately 20$ at the time of the transaction. This is the highest price I’ve gotten for a rental in one day.

I usually don’t rent out this particular card because it contributes a lot to my collection power, without it, I’m relegated to Gold level tier 3, down from my maximum level reach which is Gold level tier 2. The caveat of being in Gold Level tier 3 is that I get to collect only 22 loot chests instead of 26 which I could get in Gold level tier 2.

So I’m left to decide if I think those 4 loot chest are really worth more than having cash at hand. The reason I usually give myself is that the quality of your loot doesn’t depend on the amount of loots you are given, it doesn’t matter if you open 5 loot chests or 25, if you will get a gold card or something better, you will get it either ways.

Whether I’m right or wrong is something I will never know. This is why I will rather hold the card in my deck till the last day of the season instead of renting it out earlier into the season, so I could at least get Gold level tier 2 daily quest rewards plus Gold level tier 2 DEC rewards per battle and most importantly the highest amount of daily SPS airdrops my account can accommodate.

Speaking of daily SPS airdrops, the amount I’ll be receiving today won’t be as much as other days as a result of the gold card that has left my deck albeit temporarily, ultimately it’s a tradeoff I’m willing to make. May DEC continue to moon.

So! I have some cool news! I’ve just been accepted into an Axie Infinity Scholarship program organized by Axie Buzz!!!! Amaaaaaaaziiiiing! I’ve always wanted to be in on the action in Axie Infinity but costs won’t let me, many thanks to Axie Buzz organizer. I’ll be making a better post about it later and keep you all updated.

Thanks for reading!!! Battle till you drop fellas!

This was only my third season of renting and I was amazed how much I was able to garner by renting my 38 cards. Still getting used to the end of season bonanza. :)

Maybe I'm missing something but I think the collection power for the SPS air drop remains the same. Even with all or most of my cards rented out I stay at the same number everyday. Like I said I'm new to this so maybe I'm confused. :)

Still getting used to the end of season bonanza. :)

I will find out properly when I get today’s airdrop and let you know. I’m also not 100% sure.

So it’s almost as if it didn’t affect the rate of airdrop but it did somehow. I usually get 38, sometimes 37.8 but today I got 37.1 so I’m not exactly sure if it’s as a result of that or something else

I added up the total CP for my 38 cards and it matches the airdrop amount. I think all or most of my cards were rented out at the time of the airdrop today. It looks like it counts your CP total rented or not.

Thanks for this clarification 🙏

YAY! Congrats on all the rental wins AND the Axie Scholarship! You've been manually curated by rosiew for 1UP!

I rented out my gold foil CORNEALUS but quickly canceled it because of the less collection power and less end of season reward it will give me.
Probably a move I'll go for some time!
Nice rental move bro, at least $20 is in your bag!

Hmmn nice, how much was it worth in the rental market at the time?

We looking at three days ago it was 300 DEC per day. Tempting for me! 😃

Congrats on winning the Acie Infinity Scholarship!
I read a post on a club in the Philippines, which recruits players, provides them Aries and direct mentor ship. This play-2-earn economy is pretty cool.

Hi @mistakili
I have a question.
If you rent cards, what day do you cancel the rentals in order to get them back in time to count towards your final rating?