How are you all guys hope you will be blessed and fine. In today's post, I will be sharing the Quest rewards of today along with the league advancement that i crossed the bridge from gold to diamond league today with an above 2800 rating and also claimed the quest rewards in diamond 3 league. The Imp Bowmen may shoot toothpick-sized arrows from tiny bows, but their arrows are flame themselves, and they each have an unlimited quiver. After just a few moments of being pummeled by Imp fire, if the opponent has not caught on fire, they have definitely gone mad with irritation.IMP BOWMAN

If you have this reward card from the old edition that you got from the rewards then you are lucky because you have started the game at the right time compared to those players who join the game from the chaos legion edition when the splinterlands game got much more attention. I am also an old player and started the game from the untamed edition when beta packs distribution finished. I have this card only two BCX that i got from the rewards of quest and season end but only two BCX which is not enough then the card went out of print.

Here you can see the abilities of this card that cost two mana and we can use this card in both high and low mana battles it would be great if you have legendary summoner of Zaku and have this card at level 3 then it will possess 3 range attack with blast ability and would be a perfect choice in low mana battles. Also, the card has a flying and piercing ability that you can get from this card when you upgrade this while the flying is at level 1. 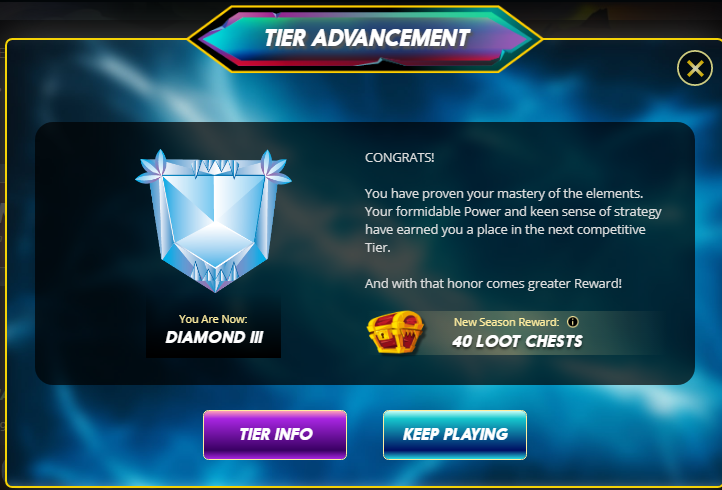 It was a good and busy day but still, i got some free time after the evening and start playing the game while doing some other stuff like adding liquidity and checking some posts on trending while playing random battles because the quest did not come so i won some battles and even crossed the league from gold to diamond and then completed the quest. Now i was about to claim the quest rewards but unfortunately, my resource credit is zero so can not claim the quest rewards but i started writing this post and now will wait sometime to restore some RC which will take almost 2 hours. However, in diamond 3 league with 2800, i will be getting 10 loot chests for the daily quest and if i stop playing here then i will get 40 loot chest rewards for the season end that is far away, and still 8 days to go in the current season so i can easily reach to diamond 2 league this time i will be there.

The quest was easy and it was with sneak ability that i completed in the gold 1 league with 2800 that i did not advance because if the league was advanced before completing the quest then maybe it was hard to complete the quest in diamond 3 league so i advanced it after quest completion now and almost my resource credit is recharged for transactions that i waited 1 and half hour. The rewards from today's quest are not that much good but the chaos packs made it good that i will share in tomorrow post that what i got from this pack while rest of the rewards are normal that is enough for today.