@nevashia 48
about 1 year ago
Splinterlands 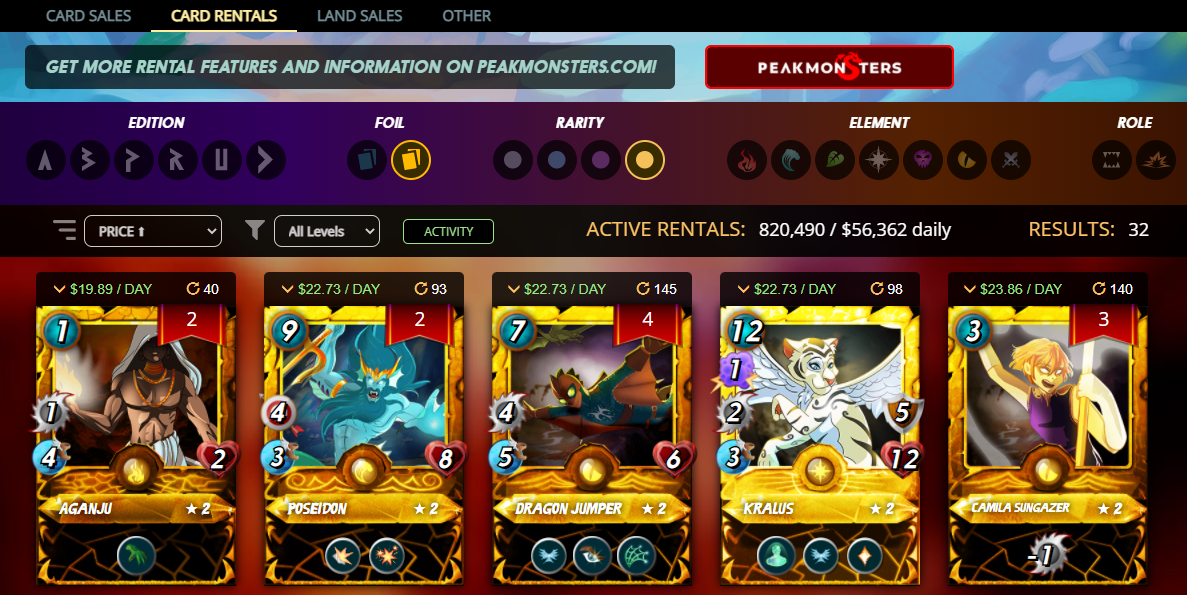 Measuring the Value of Rentals at the End of the Season

As most of us, myself included, are in need of power on this last day of the season for Splinterlands I took a look at the rental market and the currently available prices for rentals. They are very high but the question you must ask is are they actually worth it. For rentals on the very last day of the season, what are you actually gaining. The main answer to that is simply some extra reward chest by having a higher league at the end of the season, along with that you might be getting a little extra by finishing one of the daily quests at the same time. Using these as the standard, it would be worth it to see just exactly how valuable power is.

According to Splintercards a loot chest is currently worth 226 dec or $1.29 for each one. A couple things to keep in mind is that this is the overall return, including gold foil legendaries (you are very unlikely to get them, I know I never have) as well as not including any shifts in the market. I expect the value of the new cards to drop quite a bit with the end of the season as supply jumps up so the actual value of your loot chests will probably be lower than this value. I will still use this value to calculate how much to spend on rentals.

Quantity of Loot Chests from Rentals 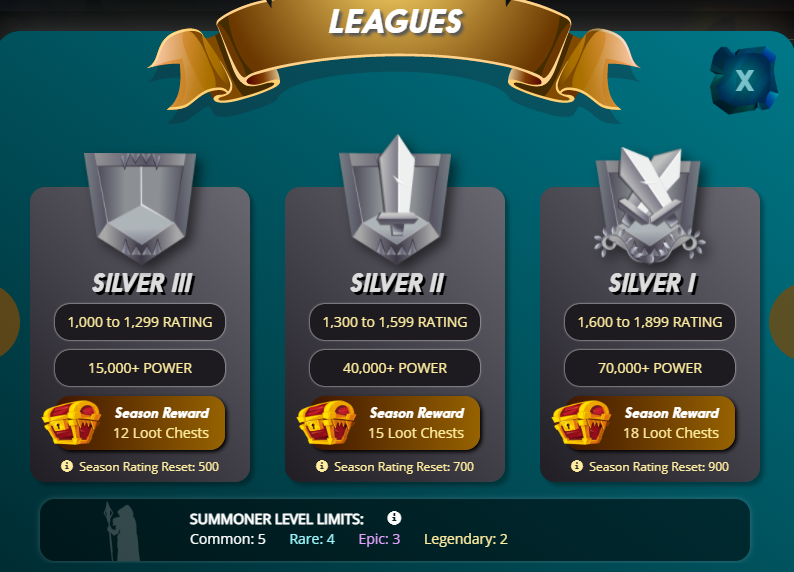 The exact number of loot chests you can get from renting extra power depends a lot upon where you are starting from so we can go through several examples from different starting to ending leagues. All of these scenarios are assuming that you already have the score needed to hit the ending leagues and so battling up there is not a challenge as well.

Using the most common type of Gold Foil Legendary you can add 50,000 power and if we assume you are brand new with no power yourself, this would take you from bronze 3 up to silver 2. This will give a net gain of 10 loot chests (5 in bronze 3 to 15 in silver 2). If you kept your quest ready to complete you will also get 2 extra loot chests there (1 loot chest in bronze 3 to 3 loot chests in silver 2). This is actually one of the best possible returns on rentals you can get.

This gives us 12 loot chests worth 226 dec or 2712 dec return in the long run. I specify long run because this would be the expected return after doing this many seasons in a row, not a single season. Using the price above for dec, this would mean a return of $15.409 from that rental in the long run. Note that the cheapest rental shown was $19.89 which is significantly higher than $15.4. You are also very unlikely to actually get $15.4 from the season since that is including the jackpot in the form of a gold foil legendary.

For both bronze 2 and 1 you will still end up in silver 2 from the rental of a gold foil legendary and simply be getting less loot chests in return.

For this scenario you would be going from silver 3 to silver 1. You would gain 6 loot chests from the end of the season and possibly 2 loot chests from the daily quest. This means that your possible return is 8 * (226 dec) or 1808 dec and equivalently $10.272. This is far less than going from bronze 1 to silver 2 and still the rental price for these cards is far higher than the returns.

This scenario assumes you are starting with 50k+ power and so will end up in Gold 3 (the best spot for this power range). You would go from 15 loot chests in the season reward to 22. You could also get an extra 3 chests from the daily quest (going from 3 daily chests to 6 daily chests). This means that gold foil rental could get you 10 loot chests and would be worth 2260 dec or $12.841 which is still less than the first scenario.

For pretty much any position in league ladder you will be getting somewhere in the range of 5-12 loot chests (including 1 daily quest) from renting a gold foil legendary.

You should also not include any possible returns from battling and getting to a higher score for this calculation. This is because on the last day of the season more people than at any other time are battling and thus even if you are getting to a higher score or position, the rewards from battling will be lower, or at best equal to what you were getting before. 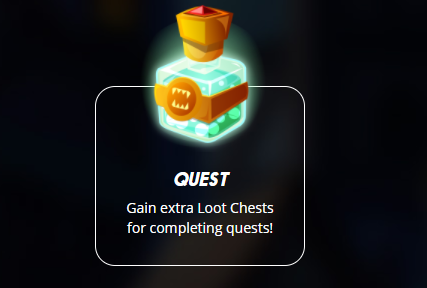 One very important question to ask is are you buying quest potions. The reason for this is that a quest potion costs 750 dec and will give you 5 loot chests. Using the value from Splintercards, this would give a return of 1130 dec in the long run. If you would be willing to pay $15.40 or 2712 dec on one rental card of a gold foil legendary, you might as well buy quest potions instead. 12 loot chests is 2.4 quest potions and would cost 1800 dec at the highest price with quest potions. You can also get discounts on those quest potions lower the cost in some small ways such as buying in bulk or the guild discount.

What this means is that you should actually be measuring the cost of those rentals for the end of the season against the price of quest potions. This would mean that the best case scenario for renting that gold foil legendary would be 1800 dec instead of the 2712 and you should only be willing to pay up to $10.23 and even then it should be a fair bit under that when factoring in discounts towards quest potions.

One last thing to note is other types of cards such as gold foil epics, rares or commons tend to be more expensive than gold foil legendaries on a pure power basis.

I hope this helps you all make better informed decisions while you play Splinterlands and enjoy the game.

Congratulations @nevashia! You have completed the following achievement on the Hive blockchain and have been rewarded with new badge(s) :

Nice article. I learned something about the battling reward distribution. I personally value chests a lot less than that as potions are nearly useless to me as I'll never buy as many packs as I find these. I'm glad I rented the power I needed yesterday, price were less crazy, but I can have some rentals canceled, risk/reward.