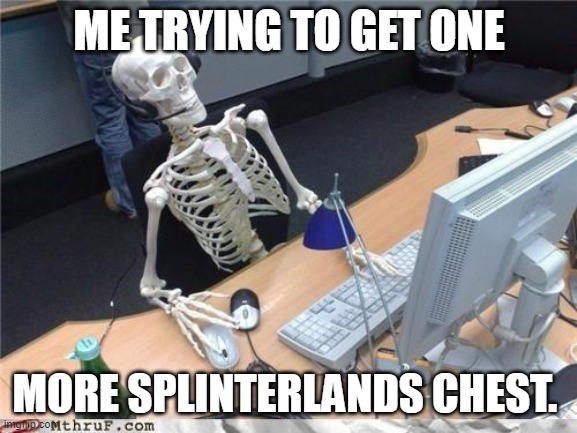 I think that we all know about the latest changes to @splinterlands over the past few days. Whether they are a positive or not for the economy will be seen further down the line but they have shaken things up quite a bit.

The biggest change being the rewards system and how it has effected the bot accounts. It will be interesting to see how they reconfigure over the season and how that works in the rental markets now that starter cards no longer generate rewards.

If you haven't seen the changes then you are one of the few but here is a summary for you.

Out of all of these the focus quests have caught my attention the most.

It's a huge improvement on th eold system for one simple reason.

Back under the old system I like to play and increase my season ranking for the end of season rewards but once you hit your quest or reached a certain level then you could stop playing and be happy with your accomplishments.

Now there are always more rewards waiting for a player that's willing to play a bit longer. To take on a few more battles.

One more win is very addictive.

You can see the bar in front of you for the next season chest or the next daily focus and you want it.

You always want more rewards. That's the whole basis for the game to exist in the first place.

Now you technically have unlimited rewards if you can play 24/7 and willing to get 10,000 wins for the next chest as your mana goes down. But i don't think any of us are willing to do that. We are however willing to run ourselves down to the bottom half of the bar in chase of more rewards which most of us have never seen before.

The only real question now is,

What do you target. More wins or more wins with the one splinter?

It's a tough one to decide as psychology says to aim for what you can get right now instead of getting more at a future date. There have been studies about this and it's areal thing.

If you haven't seen the marshmallow test before then we are the excited kids looking at the rewards.

I can't resist the marshmallow even if i know it's better to keep up my win rate and rank higher as well as build up my season rewards.

It remains to be seen how this will effect the short term sustainability of the game but i think that it is a very positive move for real players going forward and a big incentive for people to play more games.

That's so humorous. And it's really so addictive !

The new system is very addictive! Absolutely brilliant. I really haven't given much thought to strategies. I've been playing more, but I'm still trying to climb to my highest possible tier. In the meantime, I'm stacking chests! 😁

I haven't played since the change over. I've been focused and addicted to @risingstargame where I'm learning to actually profit.

I was frustrated with Splinterlands but I will give it a whirl again. I'm so bad at battling it doesn't seem like getting addicted will be worth my time but I want chests!!!

I see that it requires way more work than usual to get chests and I don't really know if I like it that much. Going up in the league is going to matter a lot for people wanting to claim the chests. The rental market is also kind of different now and I think it will take for things to settle down.

Honestly I was one that didn't see the changes and haven't played in a while. I did play the other day and wondered why I would get a warning when I would choose one of the base cards... Now I know, lol.