@niallon11 72
about 2 months ago
LeoFinance

It's been a crazy year.

I don't know about the rest of you but it's been one hell of a summer.

Who could have seen how far hive and especially @splinterlands would have come in just one year???

I know that I didn't.

I hadn't realised how long it's been and while i have been here since the early days, bought alpha cards and beta packs. It doens't seem like so long ago that we used to play battles arranged on challonge and were waiting for the website to be released.

One on one, five hour tournaments. Fighting in discord about no-shows. It was all part of the fun.

To be fair, @aggroed and @yabamatt have kept busy over the past few years. And those are just the developments.

Not to talk of different marketing, partnerships and communities that have been linked to the ever growing eco-system.

It's only right to say thanks to both of you and the extended team that has made this all possible as I know that you don't always get the credit deserved but always get the abuse. Such is life I'm afraid but some of us do apreciate all that has gone into the game.

I would say at this stage that @splinterlands is more than just a game. It's turning into a metaverse.

An all encompassing experience for the players. It has something for everybody and you don't even need to play a battle to enjoy the wider eco-system around the game.

I like to play the markets almost as much as playing the actual game.

There is great fun to be had in buying/selling/renting assets and it is a game in itself.

While everybody is rightly excited about SPS and the chaso legion presale. They are just the current hype.

For me a transaction that took place yesterday is a far more significant milestone.

Somebody bought a full region on the Wax secondary market for $695,000.

Just think about that for an investment.

This is clearly somebody with deep pockets that is setting up for the long haul. It's not just current hype but a planned investment. 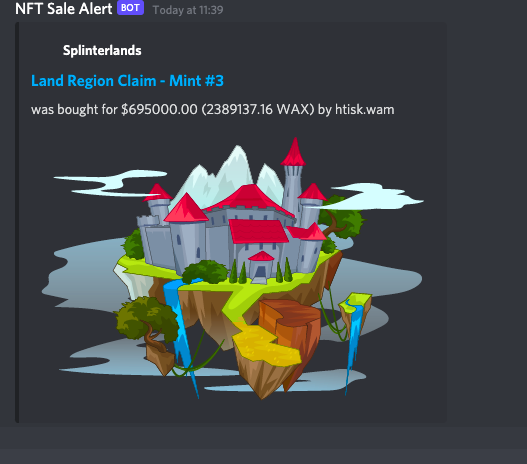 I have often wondered over the past few months whether the hype will die down and should i be cashing out some of my deck while the going is good or whether this is just the start and it could be a life changer?

Like so much in crypto, it is a big guess using what we know to date.

In the case of #playtoearn, we don't know that much as it is such a new concept.

When I see news like this however it gives me a lot of confidence going forward, knowing that there is big money wanting to get in behind us and that will keep growing the economy for the near future.

It was only this time last year that we fomo'd into land at $10 a plot or even less for a region with discounts.

Splinterlands Land Presale Stage 1
The first round of the Splinterlands land presale was sold out in 30 seconds! Stage 1 offered 30,000 Land plots in total, where 27,000 were available in the region lottery and 3,000 for Tract/Plot purchases.
27,000 of the 30,000 plots are available as regions (Region 1000 Plots) so that left only 3,000 plots for players that wanted to purchase a small number of Land Plots with the benefit of the 50% discount.

Either way, somebody made a killing on this sale that would have set them back just $10,000 which it has probably already earned back in SPS.

I don't know who it is, but congratulations.

Even back then the hype was backed up by the community and I don't see that changing any time soon.

Everything that the @splinterlands team has touched so far has turned to gold so it would be foolish not to stick with it to the end and see where we all end up.

That's my plan for the game anyway.

If you haven't joined yet then there is no better time to get involved.

Well, there is this old polish "joke":
A tourist in mountains sees a highlander sitting next to his hut, with a dog for sale.
So he asks him for the price and highlander says "100k $"
Tourist is like "WTF, is he crazy?" and leaves. On his way back he sees the highlander but the dog is gone. So tourist asks what happened and the highlander answers that the dog was sold.
"What, for 100k $?!?!?!?!?"
"No, for two cats 50k $ each"

Good joke. Lots of lols on this side.

Then he just needs to sell the two cats for 75K each, take the profit and bam.

I think there is a bit of a wave at the moment, it's hard to know how much is real and how much is hype. Its exciting though.

It's definitely riding a wave like the ICO's in the last bull run.

The only question is what stage are we at?

I know that renting out splinterlands cards at 200% APR is not sustainable unless the player base keeps growing exponentially.

With chaos legion about to drop the markets will get flooded with new cards and bring all of the prices crashing down.

It's exciting times and part of the game is playing it smart enough to take a good profit and hold onto as much of my assets as possible. The game will keep growing over the next few years but could hit a slump for a few years again like the crypto markets while development plugs along towards mass adoption.

Wasn't me that bough it. I can't afford any this for real life projects. Never mind digital assets.

Some people have lots built up over the past few years and are looking to keep building.

Agree I can't buy anything that pass 50$ either

$695,000 is just crazy. I’ve never gotten involved in Splinterlands. Probably foolish of me. But there are so many ways to leverage Hive.

When the hype hits, all rules go out the window.

These plots were sitting there for 20k for months if anybody had the funds to pull the trigger.

Game gets a little hype and some users and now you can name your price on some cards and assets.

Classic crypto. At least there is development and a history behind splinterlands to justify some of the hype. Not like some of the projects getting pumped into the sky.

Pretty wild number I must say. It is incredible to watch what is happening with the amount of wealth creation on Hive.

The game just keeps going from strength to strength.

The more publicity that the game gets like this, the more hype that builds up behind it.

Numbers like this get attention and get more people playing and talking about it. It's great for the whole eco-system and hopefully more developers can see this and want to try themselves.

I am wondering if this person knew about Hive Engine. I would think the prices are probably cheaper there as opposed to WAX and I know some people like to sell things for high prices elsewhere.

This could very easily be one person just selling the region to themself to create a bubble. Wax doesn't have a KYC and people can have multiple wallets. We're seeing this kind of activity in other collectible markets and it's even easier to do in the NFT space. Karl Jobst has a good video on how this is happening in the retro video game market