Hello everyone. I'm going to share another battle using our featured card of the week, Crystal Jaguar. This time we are up against a Fire Splinter lineup. Let's see if our team strategy works in this kind of matchup. 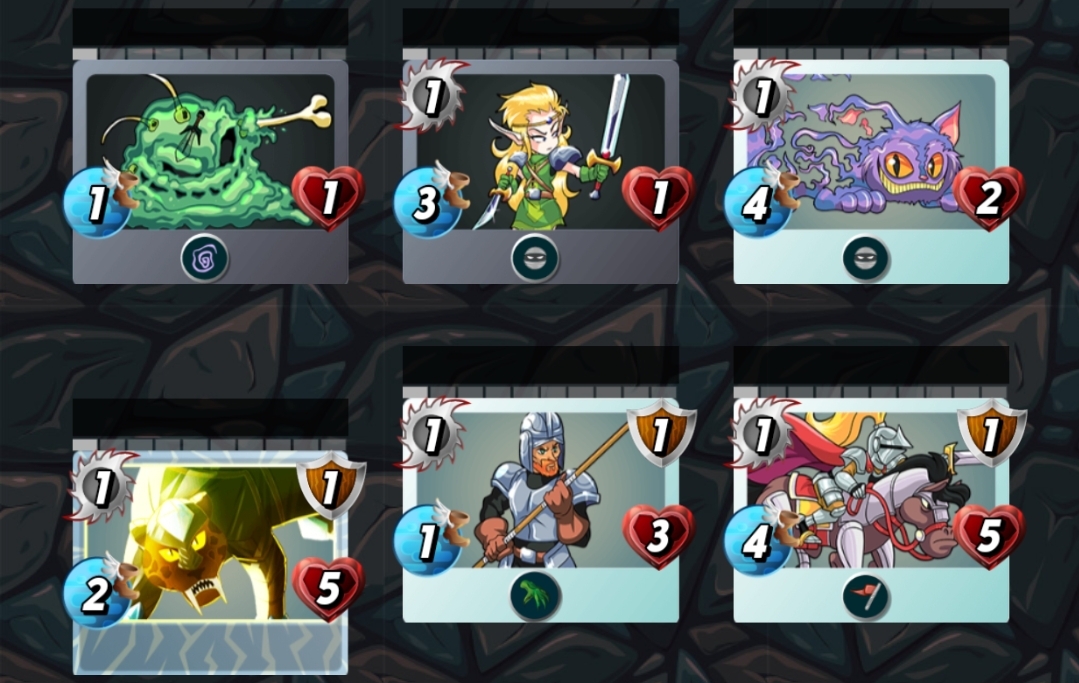 We are still using Tyrus as our summoner in this matchup. Our damage dealers in this lineup have low health so the +1 Armor would allow them to survive longer in battle and not get killed instantly. Our featured card Crystal Jaguar is our tank monster. We'll be using this card to protect our damage dealers and Silvershield Knight who buffs our team's Melee damage. We'll be using this card as our backup tank so that if Crystal Jaguar dies, we still have Silvershield Knight protected. It also has a Reach ability that allows it to attack and do Melee damage when placed on the 2nd position. This is our key card in this lineup. Its Inspire ability boosts our team's Melee attack by 1. Eventhough it cannot attack when placed in the 3rd position, we're placing it here to protect it from attacks and hopefully it lasts till the last round to continue boosting our team's attack power. This card is one of our damage dealers. We'll take advantage of its Sneak ability and attack the enemy monster placed on the last slot which hopefully is our opponent's damage dealer. Its speed of 4 gives it a high chance of attacking first at the start of the round. This is our 2nd damage dealer that also has the Sneak ability. Since it uses Melee attack, it also gets an attack boost from Silvershield Knight. Last but not the least in our lineup is this card. Its Slow ability that reduces the Speed of all enemy Monsters gives our damage dealers a high chance of attacking first at the beginning of each round. This gives us the edge of killing our opponent's damage dealers early in the game. We're also placing it on the last slot to protect our damage dealers from enemy monsters with Sneak attack.

Our opponent chose Pyre as his summoner which boosts his team with +1 Speed. Good thing we had Creeping Ooze in our team to counter that. However, our opponent still has one damage dealer that has a speed of 5 which is the highest among the monsters in the battlefield. Our team was able to kill the enemy damage dealer placed on the last slot in Round 1. However, Crystal Jaguar also died in this round. Our opponent have several damage dealers in his lineup and one of them has the Blast ability that damages enemy monsters adjacent to its target. Our team's health is also reduced by 1 because of the enemy Goblin Shaman's Weaken ability. Our team was able to kill the enemy Goblin Shaman removing the effects of its Weaken ability. There is now only one remaining enemy monster on our opponent's battlefield. Although it has the ability to Heal itself, I don't think its enough to win this game. We were able to win the battle by Round 5. Our damage dealers including Silvershield Knight were able seal the deal after defeating the remaining enemy monster.

Although our enemy had the advantage in the first few rounds, our team was able to turn things around in the later rounds. Thanks to the Sneak ability of our damage dealers, they were able to pluck our opponent's key monsters and win the game in just five rounds.

The plan to keep Silvershield Knight alive till the last round worked. Its buff increasing our team's Melee attack gave our damage dealers the advantage of killing enemy monsters in a single attack.
I would probably replace Silvershield Warrior with Mother Khala and try to use its Heal ability to allow Crystal Jaguar to survive longer in battle.

Do you like the CRYSTAL JAGUAR? Why or why not?

I like using Crystal Jaguar as a tank in low mana matchups when using a Life Splinter lineup. Its cost of 4 mana gives us extra mana for adding more monsters in our lineup.

I hope you enjoyed the twist of events that happened in this matchup. Till the next battle challenge fellow Splinterlands fans.

Congratulations @poohdie! You have completed the following achievement on the Hive blockchain and have been rewarded with new badge(s) :