@poohdie 56
about 1 month ago
splinterlands Hello Splinterlands fans. Here's another battle challenge using our featured card of the week: Haunted Spider. This time we'll try using it against a Life Splinter lineup and see if it will help us win this matchup. Healed Out: No type of healing is allowed in the battle. 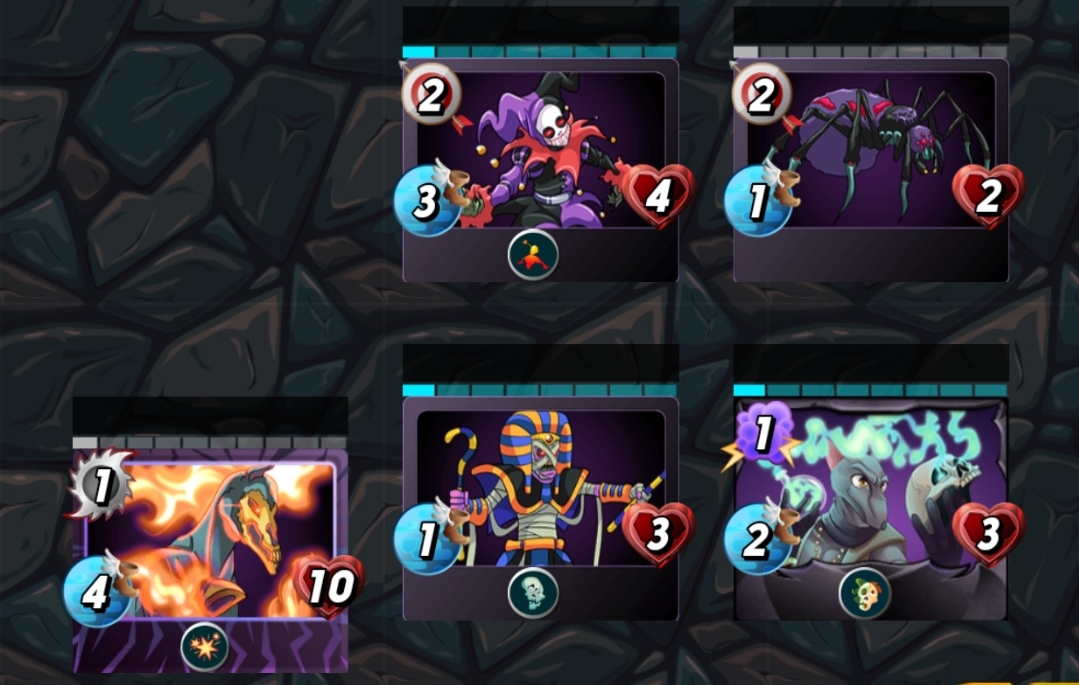 Our opponent likes using an all Melee attack lineup based on his previous battles. We're going to use Zintar Mortalis as our summoner to reduce the enemy team's Melee attack damage. We'll be using this card as tank in this lineup. Not only does it have huge health of 10, it also has the Blast ability that does additional damage to Monsters adjacent to the target Monster. The Weaken ability of this card that reduces the Health of all enemy Monsters would be useful in this matchup. It will help our team kill enemy monsters faster. This card's Life Leech abiliy that increases its health each time it damages an enemy monster's health in proportion to the damage dealt is pretty awesome. We're placing it on the 3rd slot to protect it from attacks and give it ample time to accumulate health before it reaches the frontline. We're placing our featured card at the backline to protect it from attacks. This is also one of our damage dealers so we need it to last till the last Round. Another Ranged damage dealer with Snipe ability. Hopefully we can take advantage of its Snipe ability to quickly kill enemy monsters with Ranged or Magic attacks. Our opponent used Silvershield Knight to boost his team's Melee attack and Creeping Ooze to slowdown our team. Nightmare's Blast ability did not do that much damage since all enemy monsters had additional armor added by Tyrus Paladium. Round 1 was a steady fight, no monster died yet. Our tank monster as well as our opponent's died on Round 3. Venari Bonesmit is slowly accumulating health and is now at 4 health. It'll definitely have more health by the time it reaches the 1st slot and act as our next tank monster. Our team was able to kill another enemy monster by Round 4. However, Undead Priest is hanging on its 1 health. It will probably be killed on the next round. Now our opponent only has one enemy monster that can attack and has 1 Melee attack power. The enemy Creeping Ooze died on Round 5. It took a few more attacks but our team was able to defeat the remaining enemy monster by Round 7 claiming victory in this battle.

Our opponent had the advantage at the beginning of Round 1. Enemy monsters had +1 Melee attack buff and our monsters were slowed down. Good thing our team was able to turn things around by Round 4 after killing the enemy monsters at the frontline. Venari was also able to accumulate some health before it took over as tank. As expected, it protected our damage dealers till the last round and we wre able to claim another victory.

The plan to take advantage of Nightmare's Blast ability did not work since our opponent's chosen summoner, Tyrus Paladium, added +1 armor to all friendly monsters. Good thing Venari Bonesmith was able to accumulate enough health and protected our damage dealers till they were able to wipe out our opponent's monsters.

Do you like the HAUNTED SPIDER? Why or why not?

I seldom use Haunted Spider in battles. But after using it several times while gathering data for this week's challenge, I think its a pretty decent card for 3 mana. However, it would be better if its at Level 4 to gain the Poison ability.

That's all that we have for today. I hope you enjoyed our featured battle. Till nxt time. Have a great day ahead!!!