A Series: What if? Philippines Myth Creatures as Splinters Volume 1: Aswang

It's been a while. Oooh I missed writing here.

It took too long but here it is, the first volume of the series project that I have mentioned on my introductory post. If you missed it, I said that I will be doing a series of blog regarding the "What if the Philippines Mythological Creatures are part of Splinterlands."

That being said, let me introduce you to the first creature that I would like to talk about; 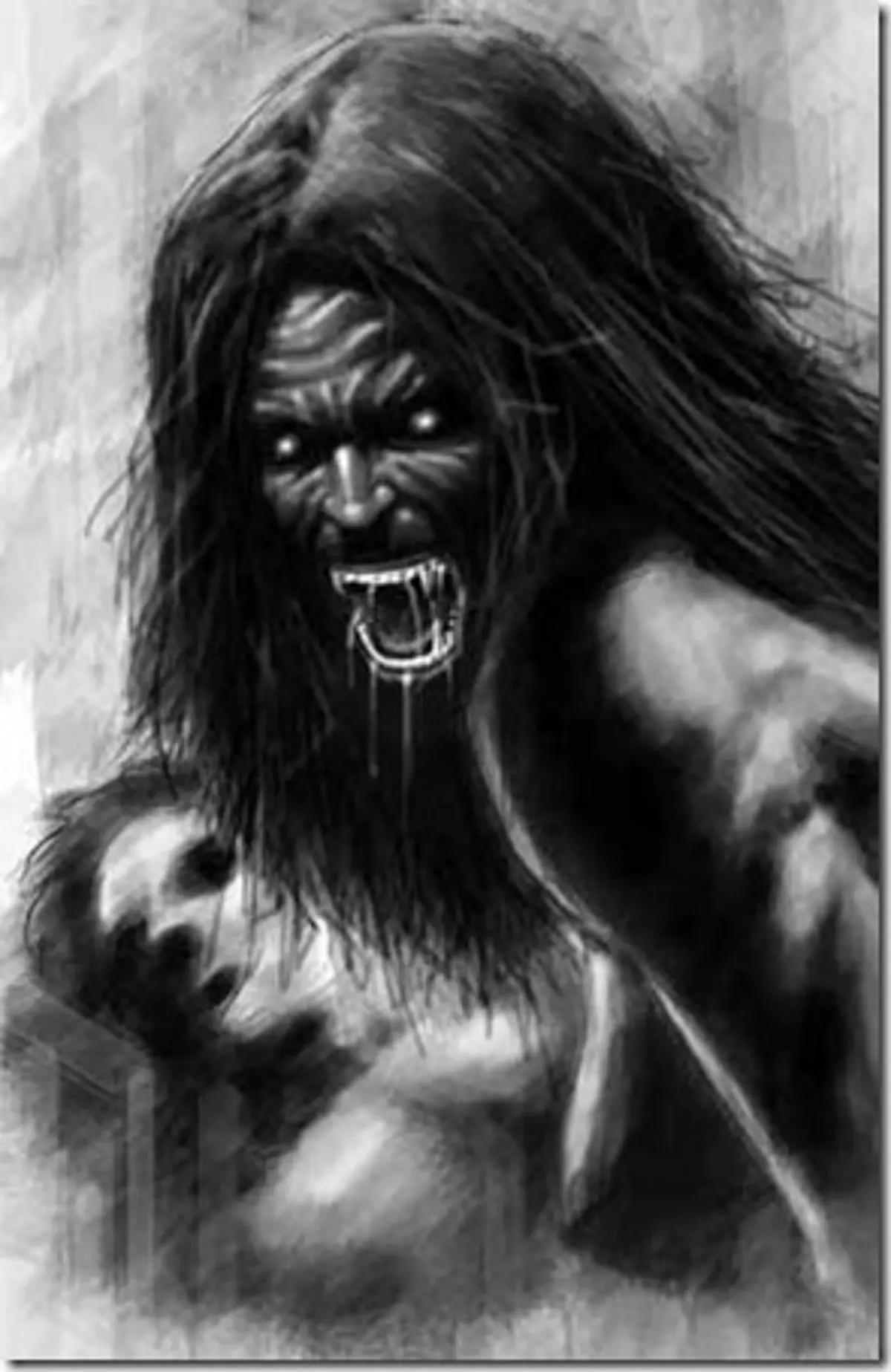 Aswang is a widely known evil creature in Filipino lores and stories, It is said that aswang can do shape shifting and has no other purpose but to cause harm among humans and even their kin.

Aswang can live among human settlements as they can change their appearance, this is what distinguishes them among other creatures. As most other evil creatures they are also said to be weak when there is light but extremely strong during night time especially when the moon is full.

They have sharp teeth and razor edged claws which is their primary weapon in combat, they move so quick and said to be able to jump through the roof. It is interesting to know how they would do against the monsters in splinterlands, and that's what we're about to find out.

As part of this blog, I have made an illustration and card design for us to see a visual representation of how they would fare in the land with the stats that we could understand.

As part of the creative process it started with a sketch; 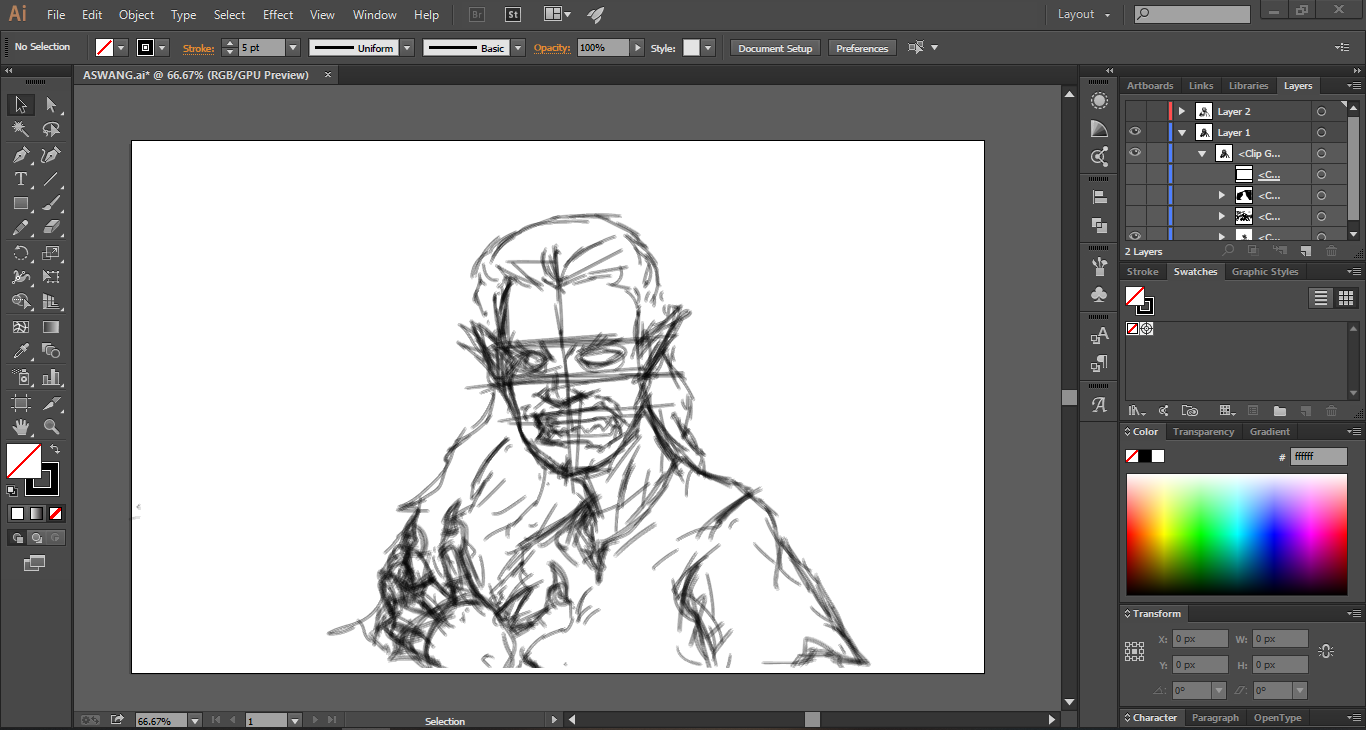 and then a finalized line art; 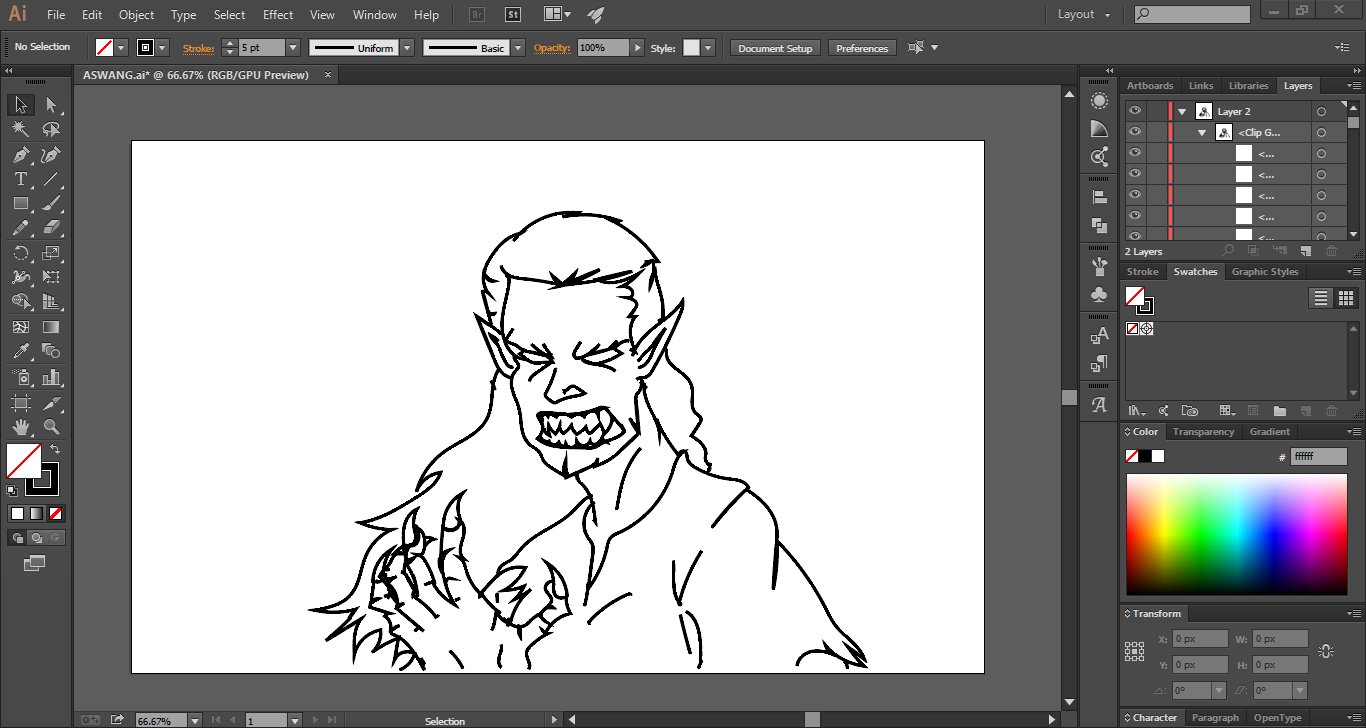 and then the colors and details; 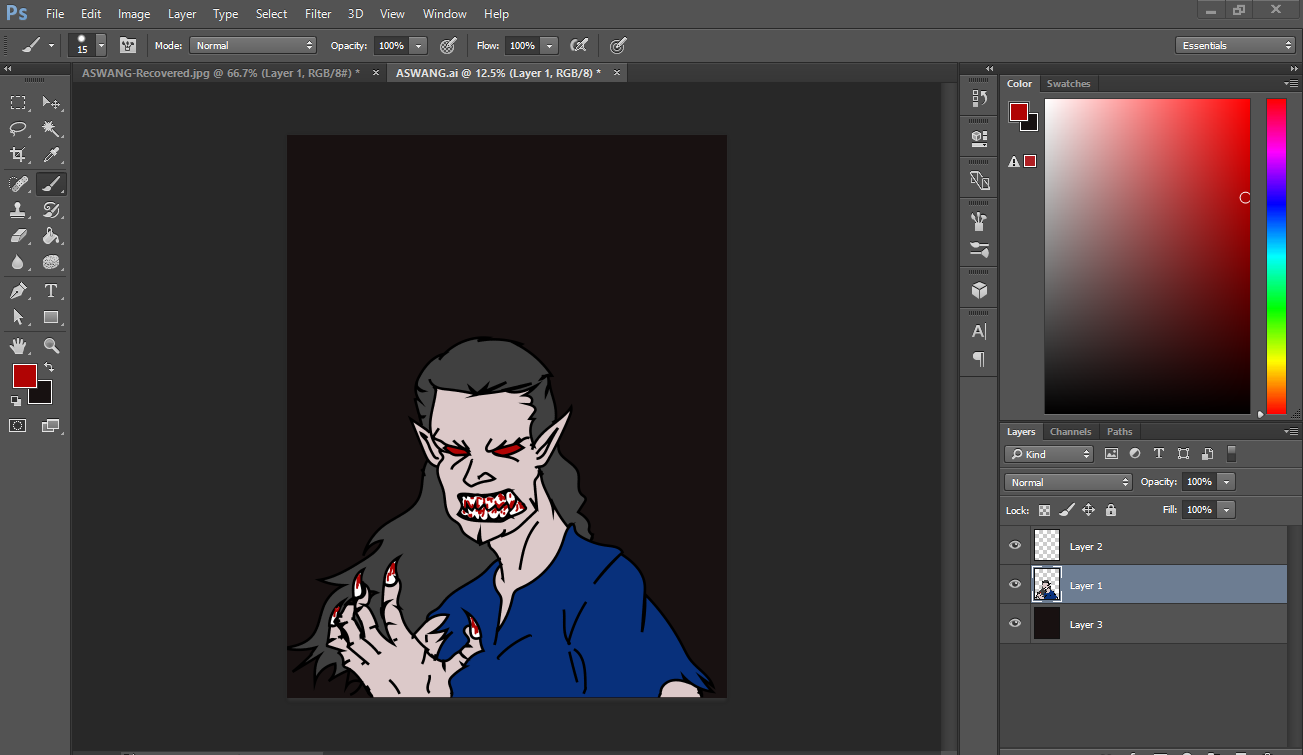 After the design is finalized, it was time to put it on a card that would give them life as a monster in splinterlands. 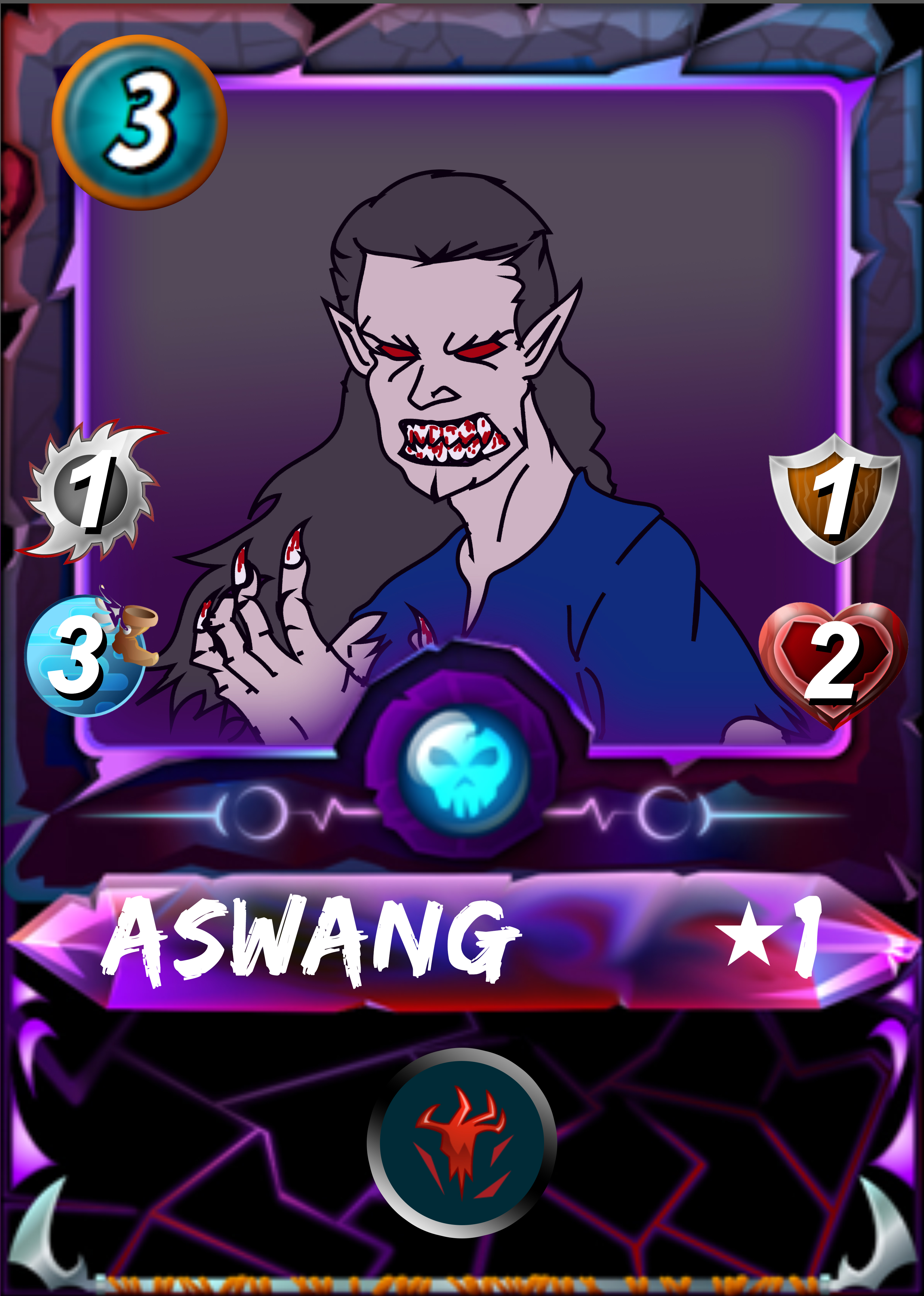 I choose to have it as a death monster because Aswang is definitely evil by nature and now that we've seen it, let's try to dissect the stats and its ability.

Mana is 3 because I felt like its the best for them.

Their agility is enough me to give them this decent speed, it is not slow but it will still be faster.

For their attack, It's quite obvious that they're using their teeth and claws to inflict damage that's why it has melee attack. I choose 1 as base damage because of it ability which I will tackle later.

Aswang are known to strong but not as durable as other monster thats why I choose of it not to have to much health.

I put 1 shield because even though they are not as durable as others I know that they can be resilient and they would need additional boost on defense as possible.

I choose this as i feel like this fits the aswang the most. As per the ability description on splinterlands.com;

Bloodlust - Every time this Monster defeats an opponent, it gets +1 to all stats (in the Reverse Speed ruleset, -1 to Speed).

With every kill, the Aswang gets stronger and stronger. It makes perfect sense that all the base stats are low but the boost that it gets on its ability is lethal.

There you have it folks, the first volume of this series. I've enjoyed doing this, i put so much effort to complete this first blog so I hope and wished that you like it. I will try to follow this up as soon as possible!

Before wrapping this up, I just want to give a shout out to these amazing community you guys inspire me to thrive for more. Always better together! No Sleep Gang and Salt Gang. Splinterlands family on Twitch!

For the people who haven't check the community yet, please feel free to give it a try and join us! Almost all of the streamers are giving out so much to the community, who knows you could be next!

That's it for today! Take care and see you again next time!

Great work! I enjoyed learning a little bit about Filipino mythology as well as your art and the way you incorporated it into Splinterlands. I look forward to seeing more of these in the future!

P.S. - You should submit these to the weekly Splinterlands art contest if you haven't already.
https://peakd.com/hive-13323/@splinterlands/splinterlands-art-contest-week-158-10-booster-pack-prize

Hello! Thank you so much for the feedback, I really appreciate it! Much love, I will try to follow it up with the second volume as soon as possible. Take care!

I have to leave some !LUV and !PIZZA here.
Really like the artwork!

@ralpholy18, you've been given LUV from @solymi.

@solymi, sorry! You need more to stake more $PIZZA to use this command.

Thankyou so much for the love! I really appreciate it. Ofcourse you can have your own version of the series, Feel free! Stay safe fam!

Fantastic artwork and I really love the Idea of taking a local myth creature and making a splinterlands card out of it.
I might steal this idea and do my own approach on some figures of the hungarian mythology.

Your post has been manually curated with $ONEUP by @solymi delegation provided by @oneup.delegation

I just shared your post with the folks of the Pimp Your Post Thursday Podcast. Maybe stop by as they are still live! The show is hosted by @shadowspub on @dreemsteem's DreemPort Discord Server.

There’s not a lot of rules to follow, but there are a few:

This is great Sarge! We'll surely do, Thank you so much for the heads up! #NoSleepGang

thanks for sharing Sarge!!! will always be more fun with more presenters hehe

Congratulations @ralpholy18! You have completed the following achievement on the Hive blockchain and have been rewarded with new badge(s) :