The competition in Splinterlands is getting harder by the day and that is a good thing. Running up the Rank League to earn yourself daily rewards can be a challenging task. Smashing through the talented tournament players in tournament battles isn't as easy as it use to be. This doesn't only apply to the top Gold/Diamond and Champion Leagues. Every Splinterlands League from Novice to Champion has its players that are top notch. There is no easy ride regardless of league chosen. The aforementioned is one of the things that makes this game so great. There is competition at every level that helps you up your game. Ranked play can be just as challenging but with some skill/luck and persistence all mixed in one earning rewards Daily is something that is guaranteed. If you are new to the game you might be wondering, "What Type Of Rewards". To that I say, "Lets take a look at my recent daily rewards". 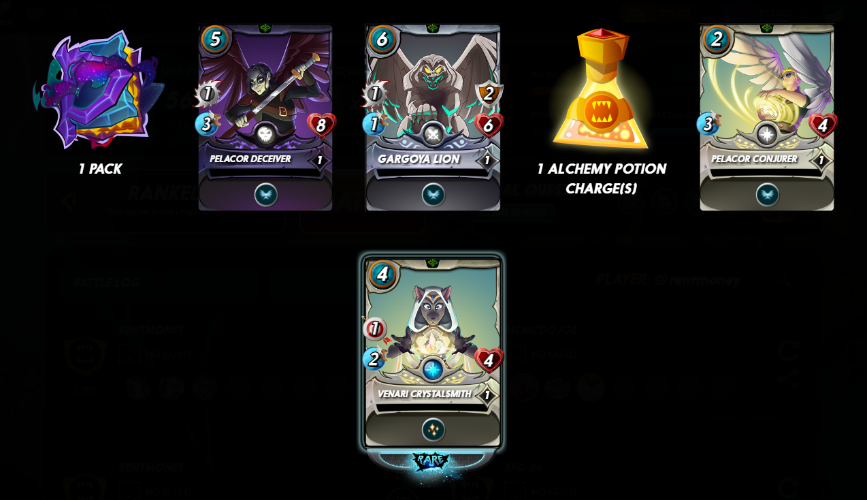 Above you will notice six different rewards. I earned them by completing my daily quest in the Splinterlands game. Daily Quest challenges vary each day and so do the rewards earned for completing them. The rewards won/earned are always game related assets. How this works is once in a 24 hour period the game will give you a quest that is a variation of game play. Complete that quest and you will get to open reward chests. How many chest you get to open depends on the League you are in. The higher the league the higher the amount of chest you get to open after completing your daily. After completing mine I was lucky enough to get to open six. Out of the six reward chest I open four were cards, one was a potion (potions increase drop rate of gold cards and Legendary cards) and the other was a Chaos Legion Pack. This time around it only took me about 15 minutes to complete my daily and within that time my earned value was over $4.00 USD (the Chaos Legion Pack is worth $4.00 USD on its own the common cards are worth about $0.03 USD each). Lets open that Chaos Legion pack and see the value of what is inside. 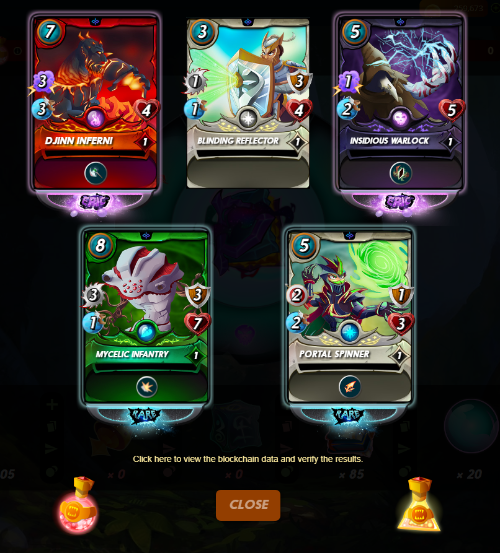 Nice, inside the Chaos Legion pack was two Epics and Two Rares. When considering a Chaos Legion pack minimum guarantee is One Rare and Four Commons the pack we just opened (that we got for free I might add) was on the luckier side of randomness. To see the USD value of these cards one does not have to add them up themselves. Luckily PeakMonsters does all the hard work for us and displays that USD value directly on their site. (What Is PeakMonsters?) PeakMonsters is a secondary market for the Splinterlands game. It has many unique and cool features and one of those features allows us to view the total USD value of our open packs and earned rewards. I can talk all day about how awesome PeakMonsters is but I won't do that. Instead I will leave you the link (https://peakmonsters.com) and you can explore how awesome the site is for yourself. All that is needed to sign in is your Hive Network Posting Key. Lets take a look at the Lore of the Epic Monsters flipped in our Chaos Legion Pack. Displayed Lore has been taken from the official Splinterlands site.

Djinn Inferni is the eldest of the ancient wardens of fire, spirits of flame that dwell in the deepest rivers of stone. Second only to Lord Janai himself, he is prideful and cunning, but fiercely loyal to his master. With the opening of the rift and the betrayal of Djinn Muriat he has taken up a blood oath of vengeance against the chaos exercitus, rising to the surface to lay waste to the enemies of stone and fire.

The singing stones had whispered at their coming, the Great Legion, agents of chaos from beyond the void but Lord Jannah had not listened. When the rift finally tore open the world the veins of the mother called to me, her vermarine song of quartz and ash a lament to the war above. I rise to the surface now, enduring the stink of water and flesh for a chance to turn the odds in our favor. With fire and death we will restore these lands and end her lament. On the mother's heart I swear it. Insidious Warlocks are a faction of the Chaos Legion specialized in death magic. Wherever they go, there is a cold chill and the shadows seem somehow darker. They speak to each other in their own language. To anyone listening, the words sound like hisses, smoky and venomous. It is said on moonless nights they gather to conduct their rituals.

When they are called upon by Chaos Legion leadership, they step out of the darkness and take on an active role in battle. They can be seen directing Chaos Legion forces and coordinating large arcane attacks. With their uniform dark robes and faces shrouded in the shadow of hoods, they are frightening for anyone to behold.

A group of Insidious Warlocks stood in a semi-circle along the ridge, overlooking the battlefield below. Their black cloaks rippled out in the cold wind and their hands moved in tandem. Dark, shadowy tendrils of magic slithered around them as if alive. The air was filled with the sounds of their strange and haunting whispers.

And then they directed the magic as one. It swirled together into a singular lance that they fired across the battlefield. It sailed through the air and then slammed into a group of enemy soldiers. An explosion ripped the ground apart, and bodies were flung into the air.

As one the Insidious Warlocks twisted their hands. The shadowy magic that trailed off from the explosion took form. It slithered through the troops like multiple serpents. These shadow serpents bit at soldiers' faces. And when their fangs connected with flesh, the victims were blinded. Screams echoed out as warriors dropped to the ground. The might of the Insidious Warlocks was absolute. 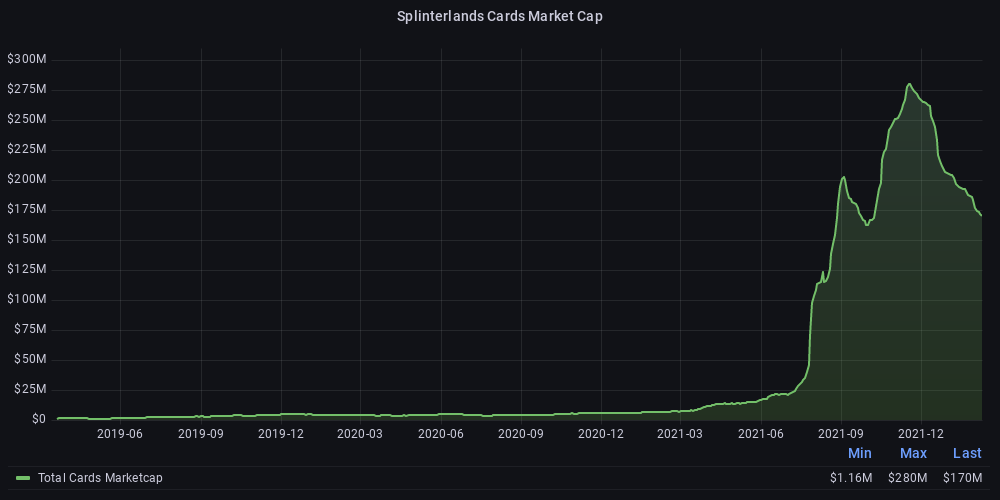 Some of you might be looking at that graph and thinking (EWWW) look at that downward trend. Truth be told most Splinterlands OG's were expecting a dip in card prices. Those of us who have been around since the Alpha/Beta edition seen this process multiple times already. A new edition is released and players rightfully FOMO over the new amazing cards. They then proceed to sell their "old" cards at discounted value to purchase the new and usually more cost friendly edition. This creates a circle of positive events. The sellers of the "old" cards get to build a bigger deck by selling their higher USD valued cards in exchange for the new cost effect cards. The buyers get to buy these cards at discounted prices to help round out their decks or hold for investment purposes. So while some look at that graph and see negative, I look at that graph and see opportunity and I hope you see the same.

I'm filling up on cheap reward cards at the moment. Maxed out cards for under 20 bucks.
What's not to love.
They won't be this price in two years when the print has long gone and there are a few very good cards in it.

I'm always torn between holding at Level one for resale value or combining to have max cards. In either case, its very likely these 3 cent BCX cards won't be 3 cents forever. Thanks for stopping by, !PIZZA.

Your daily reward is pretty cool congratulations. Djinn Inferni and Portal Spinner are among my favourites, surprising how cheap they are, but I think they will be valued even more in the future.

Historically the cards in packs usually never meet the cost of the pack itself. One has to get lucky and flip a Legendary or some gold to surpass the packs $4USD value. However the future value of such cards in these packs have historically smashed the $4USD cost of the original purchase. Returned ROI on packs is a waiting game (not financial advice).

Yes that's right so I've stopped opening my packs right now. When 14 million packs are sold and the sale is over, I think that the unopened packs will be valuable and they may be sold for 5 times more in the future, so I do not plan to open some of them for now. I think it makes more sense for me not to open the packs right now and to buy the NFT cards in the market. But I will open some of my packs to try my luck. (Not financial advice).

It is tempting to open them all :)
Smart play with holding some for their resale value.

Sweet rewards there, I got a similar reward last with a pack included. it took me two days to open the pack though...lol

Am I the only one that find the daily quest rewarding than end of season reward?

I see opportunity as well, I wish I could just keep buying!

I'm usually on the bottom end of the daily and season end USD value of rewards which is ok. The game itself is fun to play. If one focuses on that aspect the rewards will add up with persistence of play. Holding the pack for two days was a smart play, these packs add 300 airdrop points towards your SPS total. It's nice to read others are seeing the potential opportunity the current downtrend is providing us.

Cards are cheap right now but that won't last too long, so it's time to load up the nfts backpack.

When I look at the chart, I only see how much we've grown in the last 2 years. Awesome!
!LUV

Such a great response and so very true. We are still up by miles compared to when the run started.

It's weird to see how your pack with 2 epic and 2 rare cards still cost less than the pack itself. I guess the value of cards need to go up otherwise it will just be gambling.

Packs have always been like a scratch ticket. Its why people keep coming back to them. For allot the chance to get a GFL for just $4 outweighs the in the moment potential lost ROI.

In the end it is a monetized game or not, the main objective is to be entertained and have fun. The packages have a fixed cost but the benefits can be much higher, the risk will always be present.

If we treat the game as any other game we have ever played, entertainment first, ROI second; nothing is lost as entertainment cost money. With Splinterlands there is a chance to get that spent money back.