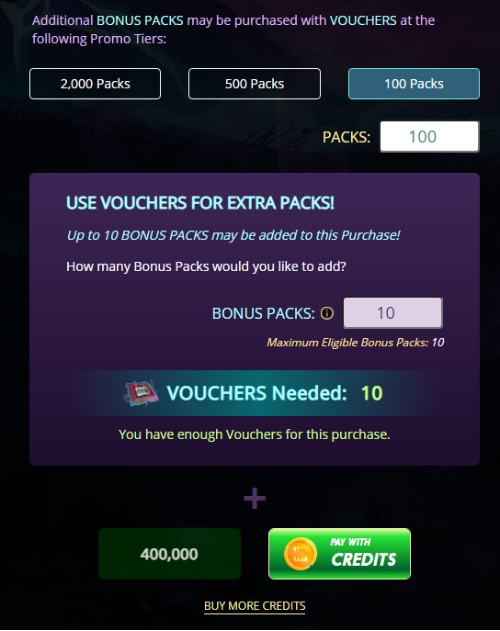 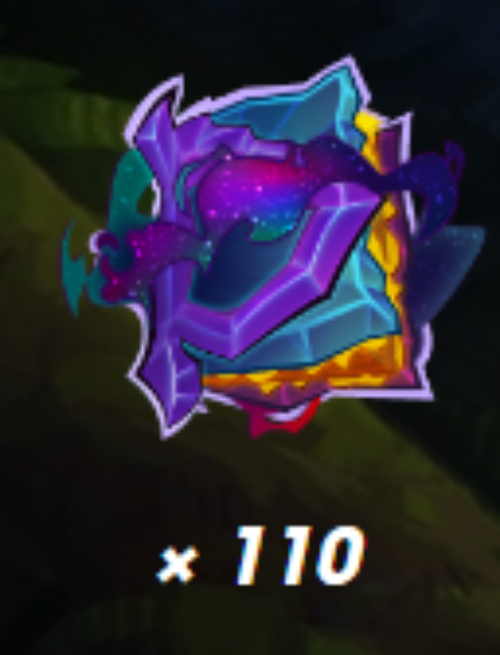 As many know Splinterlands general sale for their newest edition of NFT's named Chaos Legion is in full swing. Within the first 24hrs of general sale being available a staggering 2.34 Million Booster Packs sold. While sales slowed down slightly make no mistake about it Chaos Legion Boosters are still selling in bunches. Today (01/19/2022) a total of 8.44 million Chaos Legion Boosters remain on the Splinterlands market for sale. How long will these last is anyone's guess but I can tell you from past experience when the supply dwindles down to the last "few" boosters left FOMO kicks in hard and the last days of sale usually is a mad rush to get as many packs as one possibly can. With past editions the max supply of booster packs has been much smaller than with the current edition (Chaos League). In the past the mad rush to purchase the last of the booster packs for sale usually started somewhere around the 100,000 remaining booster mark. Its very likely FOMO kicks in allot sooner than that with Chaos Legion. The UNTAMED edition had just 1.5 million boosters for sale. That means at roughly the 7% mark (7% of total boosters remaining) FOMO kicked in. If we use that same metric for Chaos Legion (7% of 15 Million) that will leave us with FOMO kicking in at the One Million mark.

Before doing so I need to figure out how many packs I want to purchase. For this batch of purchases I have settled on 100 Packs and this allows me to have 10 Bonus Packs for the price of 10 Vouchers. I can opt out of receiving these bonus packs if I want but I won't be doing that. This means I have to check to see if I have enough Vouchers for the purchase (Check: 10 Vouchers ready to go). I feel as they should change the name of the "bonus" packs to something else. They are no longer a bonus as we are paying for them with Vouchers but that is a topic for another time. Currently Vouchers are selling for roughly $2.22 USD so trading a Voucher for a Chaos Legion Pack that would usually cost $4.00 USD is a steal of a deal.

The Splinterland site very cleverly brings us to the MANA WELL which temps us to open our packs as soon as we buy them. Of course I can't resist that temptation and open some packs I will. At the time of typing this I haven't opened them yet so I will be revealing what is in each pack as I open them. I almost forgot, I need to check my potions to make sure I have enough to open a handful of packs (Check and Check). Now Lets see if lady luck is on our side. 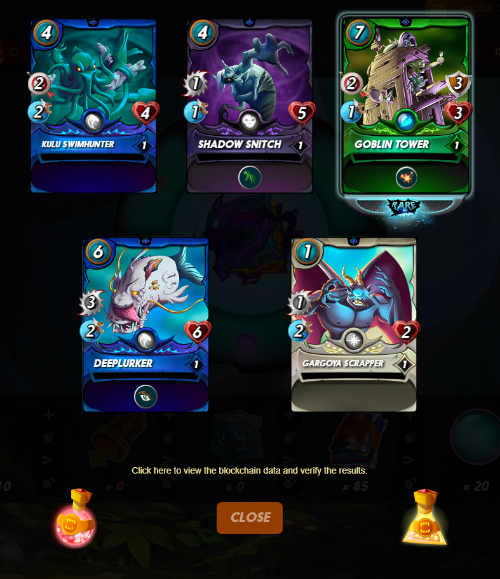 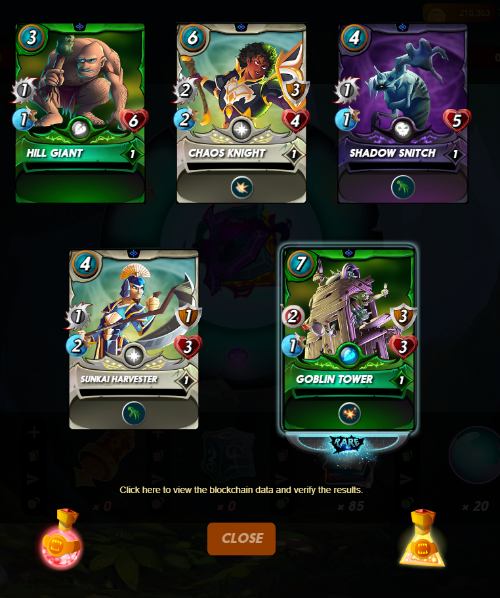 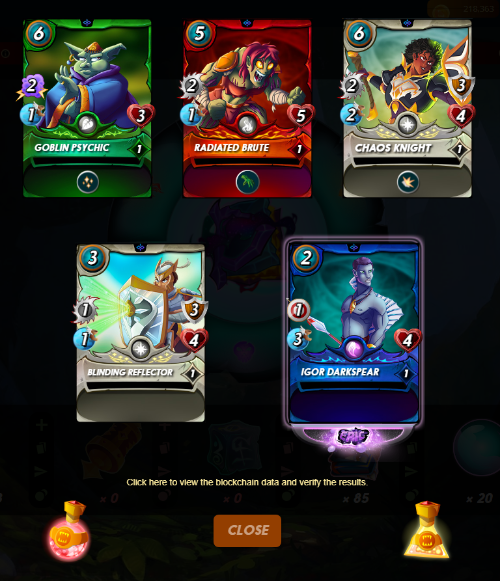 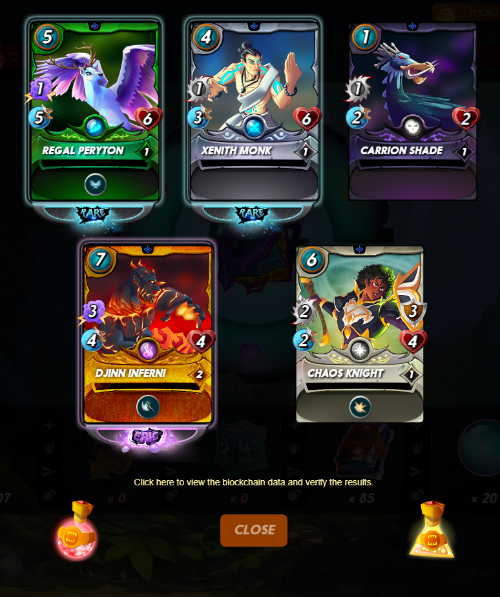 My first two pack openings gave me some decent cards but were the standard four common and one rare openings. I was debating on packing it in but that MANA WELL kept tempting me so I opened another and this time I managed to flip the Epic Monster known as IGOR DARKSPEAR which so happens to be a low mana card (2) and those are some of my favorite monsters. With an epic appearing in my third opened pack I decided to press my luck and open a forth. In our Fourth opened pack the first two cards ended up being rares and then the fourth card flipped BOOM a Gold Foil Epic known as DJINN INFERNI. It cost seven mana to play but comes with three magic attack, four speed and four health. It is also equipped with the ability known as Giant Killer (Does double damage against Monsters that cost 10 mana or more). Currently this card is worth about $45 on the Splinterlands market. With opening four packs at $4 USD each for a total of $16 USD spent that leaves us with $30+ in USD profit. 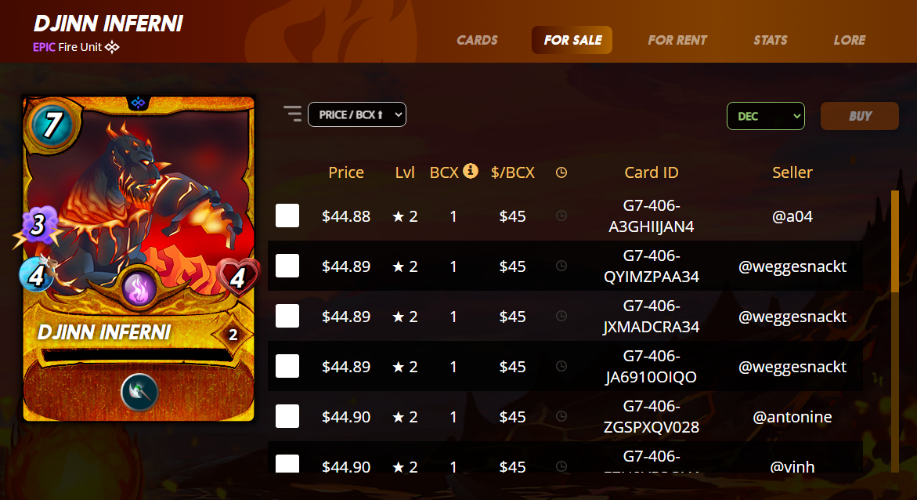 Lore taken from official Splinterlands site. Djinn Inferni is the eldest of the ancient wardens of fire, spirits of flame that dwell in the deepest rivers of stone. Second only to Lord Janai himself, he is prideful and cunning, but fiercely loyal to his master. With the opening of the rift and the betrayal of Djinn Muriat he has taken up a blood oath of vengeance against the chaos exercitus, rising to the surface to lay waste to the enemies of stone and fire.

The singing stones had whispered at their coming, the Great Legion, agents of chaos from beyond the void but Lord Jannah had not listened. When the rift finally tore open the world the veins of the mother called to me, her vermarine song of quartz and ash a lament to the war above. I rise to the surface now, enduring the stink of water and flesh for a chance to turn the odds in our favor. With fire and death we will restore these lands and end her lament. On the mother's heart I swear it. That fourth pack was a definite winner. Congratulations on your Epic Gold Foil. Is that the best card you've opened so far?

Thanks, yes that is the best one but I only opened about a dozen packs. I'm still scratching my head on what to do. I'm leaning towards putting more effort in the market game (renting/pack hoarding) instead of the battle game. The only thing I decided so far was to use the remainder of my credits $200+ worth to buy CL gold foils.

There is a chance we hit a slow period of pack sales (like happened with all other edition pack sales) and that is when card prices are at their lowest so I will be keeping an eye out for that. Did you figure out at what price point you might switch to buying packs from secondary markets instead of direct from Splinterlands?

With so many airdrops left ahead of us, I'm leaning to a pack price of around $2. I don't know if we will get that low or not. As the number of remaining packs falls and the airdrops get used up, I would expect secondary market packs to be more desirable.

If sales go similar to past collections I was thinking they might hit around the $2-$2.50 mark on secondary markets. For me if at anytime a Voucher price = a secondary pack price its a sell and purchase. Vouchers price has held out stronger than I thought it would. It will be an interested couple weeks to see where everything lands.

Out of all the packs I bought ( A total of 18 or so) My gold foil Djinn Inferni is the card with the most value! With all the packs you got there's sure to be some big winners! Don't know how you do it! I'd be tempted to open them all!

Its very tempting to open them all.

I'm not sure if I'll win that battle but I'm attempting to.

Very exciting stuff @rentmoney ,
That gold foil is very nice and looks like it made the entire purchase well worth it.

With opening four packs at $4 USD each for a total of $16 USD spent that leaves us with $30+ in USD profit.

That is so awesome, this is a very good way to influence people to fomo into some Splinterlands... 😄

Thanks for sharing!
!LUV

That GFE was the money maker. Without it it would of been negative ROE. Thanks for the !LUV.

Congratulations on your EPIC pull? Literally. :)