A poor man's attempt at manipulating the Splinterlands' Market

I've been using bids on @peakmonsters over the last few weeks to steadily buy up a few single legendary cards I want to either max out or just that I want more of.

I've almost got everything I want and now I'm just waiting on a couple more copies of two neutral legendaries - Alva and Spirt Hoarder....

I have been logging in regularly over the last couple of days to keep myself atop the bids table, assuming the prices are still right, when I noticed a significantly higher bid appear on a Spirit Hoarder - the price had been around $9.60, and typically people increase bids by 1 or 2 cents (or less) - but I saw a bid go in for $10.30, which I upped as I was feeling impatient, but then I saw another bid go in for $11.24, which was just below a newly listed card for $11.25.

I then noticed the same patter with Alva ... a bid a lot higher than the previous low bid and....

I checked the account that had these for sale at the lowest prices - both for sale by @s101 (and one other account that snuck in there unless it's owned by the same person? 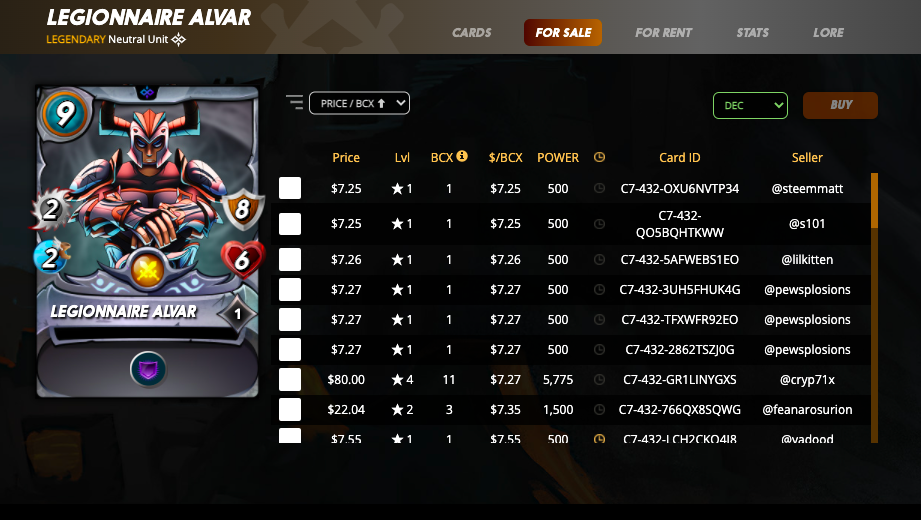 I suspect this is whoever owns @s101 trying to goad people into upping their bids, and he may have got a slightly higher price out of me due to my impatience had he not been so blatant about it.

It strikes me as a bit of a long-winded way to get yourself an extra $0.50 or so, LONG!

NB I'm not usually too fussed about keeping myself top of the bids, I'm usually happy to let them sit a while, but I'm just impatient as I'm almost through my stacking legendaries and want to get onto my next mission which is stacking a few rare gold cards!

It may be a bit- I’ve seen a lot of bids n HE go the same way for different assets. Someone probably has it programmed to outbid within x- range. Either way, it can definitely be aggravating! :)

I know what you mean, but I don't think this was a bot, much cruder!