Learning from Losses (#4): Sneak Line Up

The Sneak ruleset is one of my least favourites - I lose to it more often than not, but at least on this occasion it wasn't so bad because

Check out the battle here if you are interested! 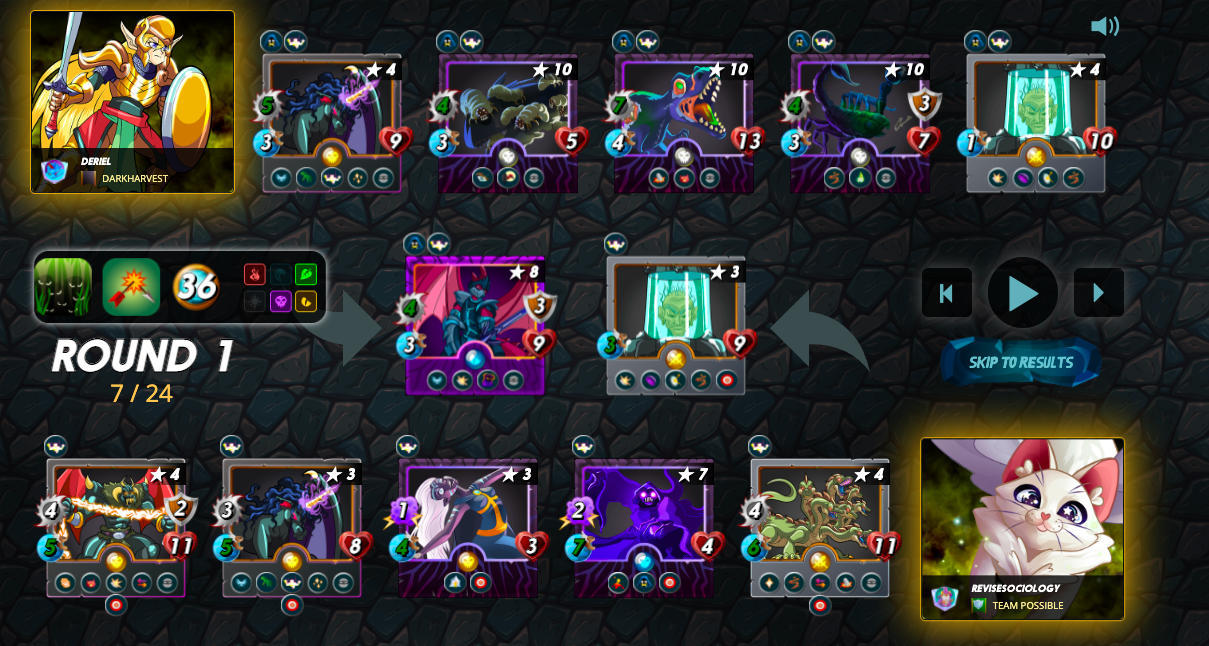 It's the three death monsters in the middle, you don't usually see them played, hardly at all, but for Sneak it's a great combination - stun and poison and scavenge in three different cards.

Which effectively neutralised my Lord A.

Although in fairness they may have got lucky, one retaliate could have wiped out one of them round one, with a different result!

Still, it's nice to see some of the less used cards out for a victory.

I hate this ruleset, it's a toss-up as to what you're going to do - you've no way of knowing whether your opponent is going to play it, or to play the curve ball snipe attack instead (it's a thing - play snipe when they expect sneak, and vice versa), but the strategy they've played here 'really playing it' gets around that - snipe would be sneak!

The only weakness I can see is against that Thorns summoner dude from Earth, which is why I'd be hesitant about playing, actually playing sneak with Earth on the cards.

It's a tough one.

By far my favorite character to use w/ the Sneak ruleset is the Vigilator; bc it has both melee + range attacks (as well as double-strike) it allows the Vigilator to strike 4 times in a row...add in a melee character with Inspire (+1 melee) in front of it & make sure it's got some "padding" around it so it can stay close to the middle for as long as possible, & you've got yourself a character that will drive your opponent nuts...there's been a few times where once it was the Vigilator's turn to strike in a match, it took out my opponent's entire team - takes out a character, 3 strikes still left to go...next character doesn't have much health so they're the next to go, and you've still got 1 melee attack & 1 range attack left to go before the other team strikes again (at which point they're usually left with a Chicken or Gelatinous Cube, lol).

If you're lucky enough to own a Vigilator, it's probably my favorite ruleset (assuming there's enough mana to allow for it to work, that is). You can obviously rent one too, although I presume it's a rather high daily rent these days...Plus, technically any melee character with double strike will do very well in that ruleset; it's just that the Vigilator has that fun extra bit of attack power that's 100% certain to annoy the hell out of your opponent...so there's that.

Hmm thanks - I do have an L3 Vigilator I think - one of my favourite cards, I hadn't even considered playing him in this ruleset, I'll give him a run out next melee battle cheers for the input.

Oh wow - you have a L3 Vigilator? Then yeah, whenever you get a ruleset that offers melee characters the opportunity to attack from any position (plus it would've been perfect for the ruleset from your original post as well - w/ "broken arrows" - makes Vigilator that much more of a threat to your opponent. It's considered a melee character, so although you cannot use any range characters Vigilator is still in play - and still able to use its range attack w/ its melee attack simultaneously...the same also applies when using a War Chaang in battle as well, although w/o the added success from double strike. Definitely give it a try next time you get Sneak ruleset w/ enough Mana - as long as the Vigilator remains away from the 1st position, you should see some solid results.

I'll look forward to it, not a fan of melee rulesets!

It just goes to show that all cards have their usecase in gameplay.

I even won with the Rusty Android the other day.

The ol' Rusty Android is underrated, tbh...I picked up a gold one a ways back - that magic reflect can be very clutch depending on the ruleset/situation, otherwise it's a pretty meh card lol.