@rtonline 71
about 2 months ago
Splinterlands 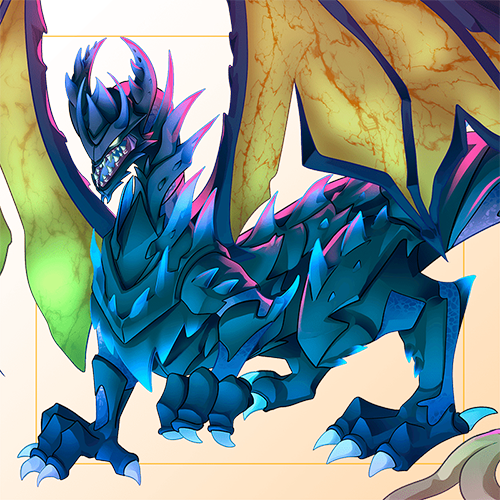 Chaos Dragon has the Flying Ability and Scattershot Ability at level 1, has the Blast Ability at level 2 and the Blind Ability at level 3. Chaos Dragon is a very powerful Dragon with really great abilities that can be quite useful to the team. Especially when it is upgraded to level 2, it has the Blast Ability and can be much more useful to its team and much more effective in battles. Indeed, the Chaos Dragon is an excellent Monster that can be very effective in battles and can turn the tide of battle, very useful to the team. The Legendary NFT card, the CHAOS DRAGON NFT Card, is currently on the market starting at $5.34. The Gold Foil one starts at $56 in the market. Frankly, I see that the prices are quite affordable for me. I may upgrade this NFT card to level 4 soon.

Armored Up rule means all Monsters have 2 Armor in addition to their normal Armor stat.
Close Range rule means Ranged attacks may be used in the first position in battles.

Before starting the battle in the video, I reviewed the last 5 battles of the opposing player and had quite powerful NFT cards and especially the 6th level Warrior of Peace NFT card. When I studied the ruleset of the battle, I predicted that the first position on the opposing team would be the Warrior of Peace. This was making me less likely to win this battle with Melee and Ranged Attackers. That's why I preferred Dragons that can attack with Magic Attacks in this battle, thinking it would increase my odds of winning this battle. In this battle, I determined my strategy accordingly. Some time ago, Daria Dragonscale nearly lost her twin brother Delwyn to the Burn that had stricken so many of the scaled. She would have lost him completely, but at his deathbed she hired the services of a dark sorcerer who transferred his soul into a special Heliosoulstone. While he was suspended inside the stone, Daria traveled to the Earth Splinter, where she visited the Flesh Golems in the root of the Elder Tree. With their help, she created a new Golem from fleshy scraps. Delwyn’s soul was transferred into the new Golem, and Daria had her brother back… forever. Pelacor Conjurer only has 2 mana and also has Flying and Magic Reflect Abilities at level 4. In this battle, I put low mana Monsters in the top three positions on my team. And I put the Pelacor Conjurer in first position because I believed he can defend well against Magic, Melee, and Ranged Attackers.

The pelacor grew to be highly intelligent and creative beings. They could imagine incredible things, and many of them were not satisfied with their soldierly lives on Solaki. From their home in the sky, they can also plainly see the disturbance in the rift in the stars. Because of their upbringing and education in Angel traditions, the pelacor are fully aware of the implications of the rift’s opening. Chaos Agent has only 1 mana, and although he doesn't have the attack ability, he's pretty effective at stalling monsters on the opposing team.

Inexplicably conjured from the Chaos plane before the rift was opened, Chaos Agents have been deployed for years in the Splinterlands to sow dissent and fear amongst the people. These infiltrators have an almost demonic appearance that is subtle enough to avoid detection and they keep their form concealed beneath dark cloaks and hoods. They never stay in one place for long, just enough time to whisper their words of rebellion and uncertainty amongst the people before slipping away without trace, leaving no evidence of their plans or existence for people to follow. Gargoya Scrapper only has 1 mana and has the Void Ability at level 4. He is a very effective Monster against Low Magic Attacks and is one of those monsters that can be very effective at stalling monsters on the opposing team due to his low mana.

When the Chaos Legion entered the Splinterlands through the rift in Mount Praetorius and laid to ruin the great castle of the Gargoya, many of the stone gargoyles fled across the sea and scattered to other continents. However, some remained in the rubble, searching for a way to rebuild their kingdom. These became known as Scrappers. There was never a more respected champion than Adelade Brightwing. Born and raised in the city of Centrum in Draykh-Nahka, Adelade always had a burning desire to help others. Growing up so near to the military base inspired her journey. She loved watching soldiers in their gleaming armor walk the streets of the city. She also enjoyed watching dragons soar through the skies, hoping one day she could fly as well.
As a young woman, Adelade joined the military at the youngest age permissible. She quickly was promoted through the ranks and become well-known for her assertive leadership. As well as for her faith in her deity, the Sky Lady. Goddess of the heavens, of light, and of honor in battle. Diamond Dragon is a very powerful Dragon with Flying, Slow and Cleanse Abilities at level 2. She also has 10 armor and 6 health. According to the battle rule, she would have +2 more armor. I predicted that the opposing player would prefer Sneak Monsters this battle, so I put Diamond Dragon in the last position on the team. I believed she could defend pretty well against Sneak Monsters.

Dragons are really powerful Monsters and they make great battles in high-mana battles. In general, I prefer to team up with Dragons if I have the opportunity in battles of 40 mana or more. Also, Chaos Dragon is one of the strongest Dragons in my deck and I add it to the team whenever I have the opportunity. It's really exciting to watch a battle involving Chaos Dragon. My goal is to have a level 4 Chaos Dragon NFT card soon, I hope I reach my goal.

Yes buddy I agree with you, it can be a real nuisance. :)

Thanks a lot for the support.