THE (crypto) SKY IS FALLING! So I'm BUYING! 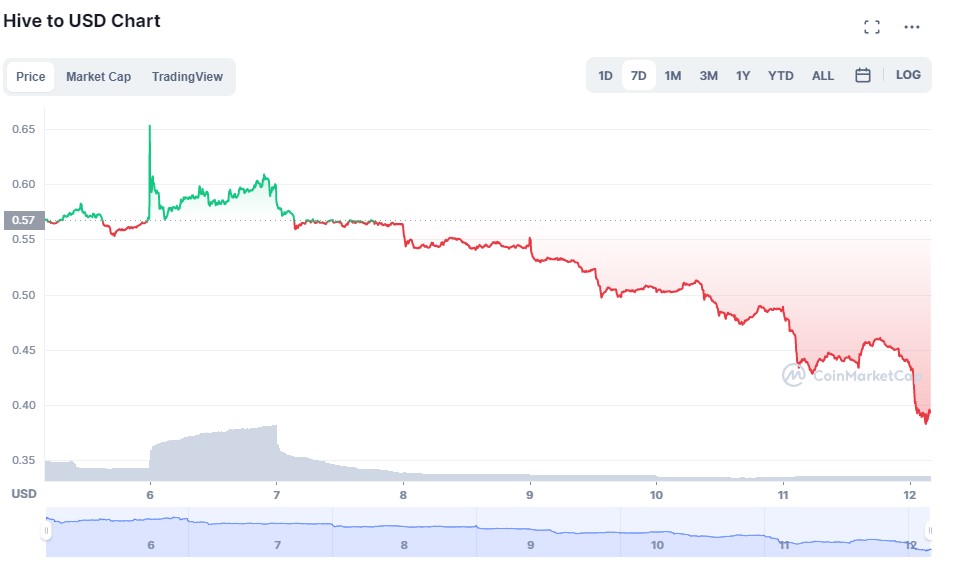 That means that I'm buying!

I just submitted an HBD to HIVE conversion and will probably do another one if the HIVE price keeps falling.

It appears that the entire crypto market is turning over this weekend, with BTC and ETH down extraordinary amounts. In a shocking move, Celsius just announced the suspension of all withdrawals and conversions too.

This probably isn't going to be the bottom, but timing the bottom is a fools errand. What has been interesting for me to watch has been the behavior of HBD since the UST/LUNA collapse. Granted, HBD is not anywhere near the scale of the UST stable-coin, but it has held up surprisingly well amidst this turmoil. For example, take a look at the price of HBD while HIVE has been steadily declining all week. 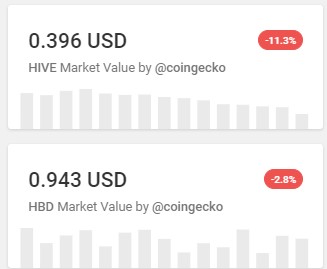 If HIVE were REALLY in trouble, versus just falling with the rest of the market, the price of HBD would not be able to stay anywhere near .90 to .95. This is providing me with the confidence I need to stay the course and keep maintaining my activity and investments in HIVE. I hope you will come to the same conclusion!

I also keep an eye on Splinterlands tokens since I am active in the @hive.pizza guilds. For the most part, SPT is maintaining a pretty consistent relationship to the price of HIVE. 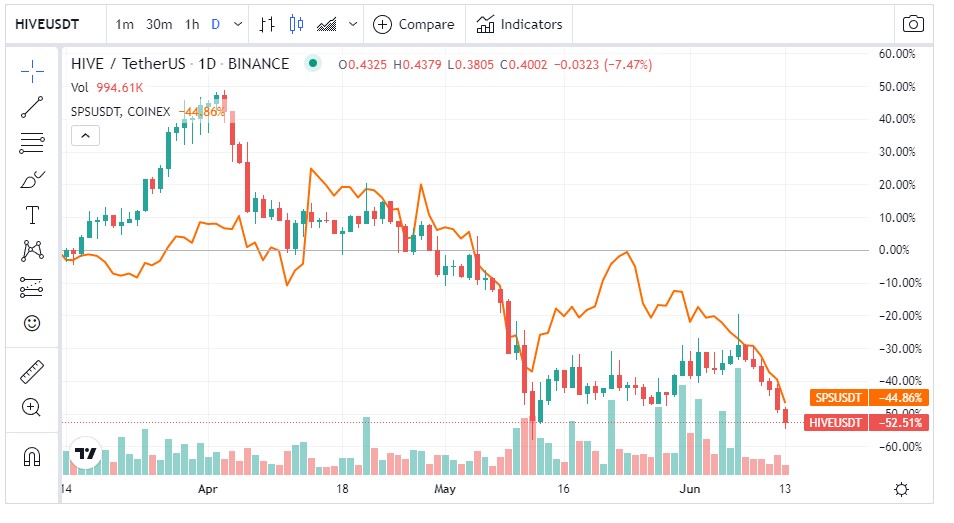 The beauty of both SPT and HIVE is that the price action can be secondary to the utility provided by them. HIVE is the byproduct of producing great content on the blockchain and SPS and SPT are the byproducts of playing an incredibly fun and addicting blockchain card game. For anyone here for the blogging and card-playing, the price action in the market isn't even on their radar. This is another thing I try to remind myself of often. Carry on!

Wow, HIVE is also experiencing some big sales. I wouldn't have expected it below $ 0.5. As you wrote it could be a good opportunity to buy.

Buying in at 15% to 25% increments from my bankroll(which is small $2.5K) putting half in Hive and the other half in LBC.

This way I can stake videos on Odysee.com with around 3k to 15k in LBC which should help me get views and build an audience.

Then introduce those interested to other Apps like Ecency, Peakd, and the one with tons of potential Fractally.

I believe there is the most potential and when you get involved early it puts you ahead of the curve.

If you like the idea of ever evolving groups and teams the idea seems to really be a unique way to respect all people involved fairly.

If you want to earn some crypto and be involved in evolution of the way DAOs should be organized then you should check out Fractally by clicking here.

Thanks for this great reply

The painful thing is that I don't have much fiat to gather these low prices.

Yeah this is the worst part about these opportunities. I'm having the same issue in the equities market.
!PIZZA

HBD is holding up nicely amidst the chaos in the market. We must hold tight and just carry on indeed! Brighter days are ahead :)

I had expected a bigger fall in Hive. Seems to be holding up well too! Go Hive!

I am quite interested in HIVE & SPS atm. Tbh this downtrend has been is making me confuse which one to buy amd which to not. Too many options lol

It would be better to buy Hive or HBD
Celo does not seem safe, her associated currency seth was suffering attacks

I could never really understand the convertion system. Is it better to convert or exchange at the internal market?

The conversion process can certainly be a bit confusing. In this case, I'm exchanging my HBD for HIVE in a way that guarantees I will receive $1 worth of HIVE for each HBD I exchange. The price is based on the median HIVE price over 3.5 days. Alternatively, I could have used the internal HIVE marketplace to sell HIVE (which buys HBD) immediately.

In my case, the conversion gives me an opportunity to average the price I get for my HIVE amidst this volatility instead of making an immediate transaction and then the price falls further. A sort of "dollar cost averaging."

Gotcha, I remember making some nice gains converting over the internal market, but that was back on Steem. Then I switched for Hive and lost my tables to calculate the returns.

I always expected a bear market to come, I am ready to hodl for as long as it takes.

Will be interesting to see if this is a slow recovery or V-shaped.
!PIZZA