Is botting a problem in Splinterlands? 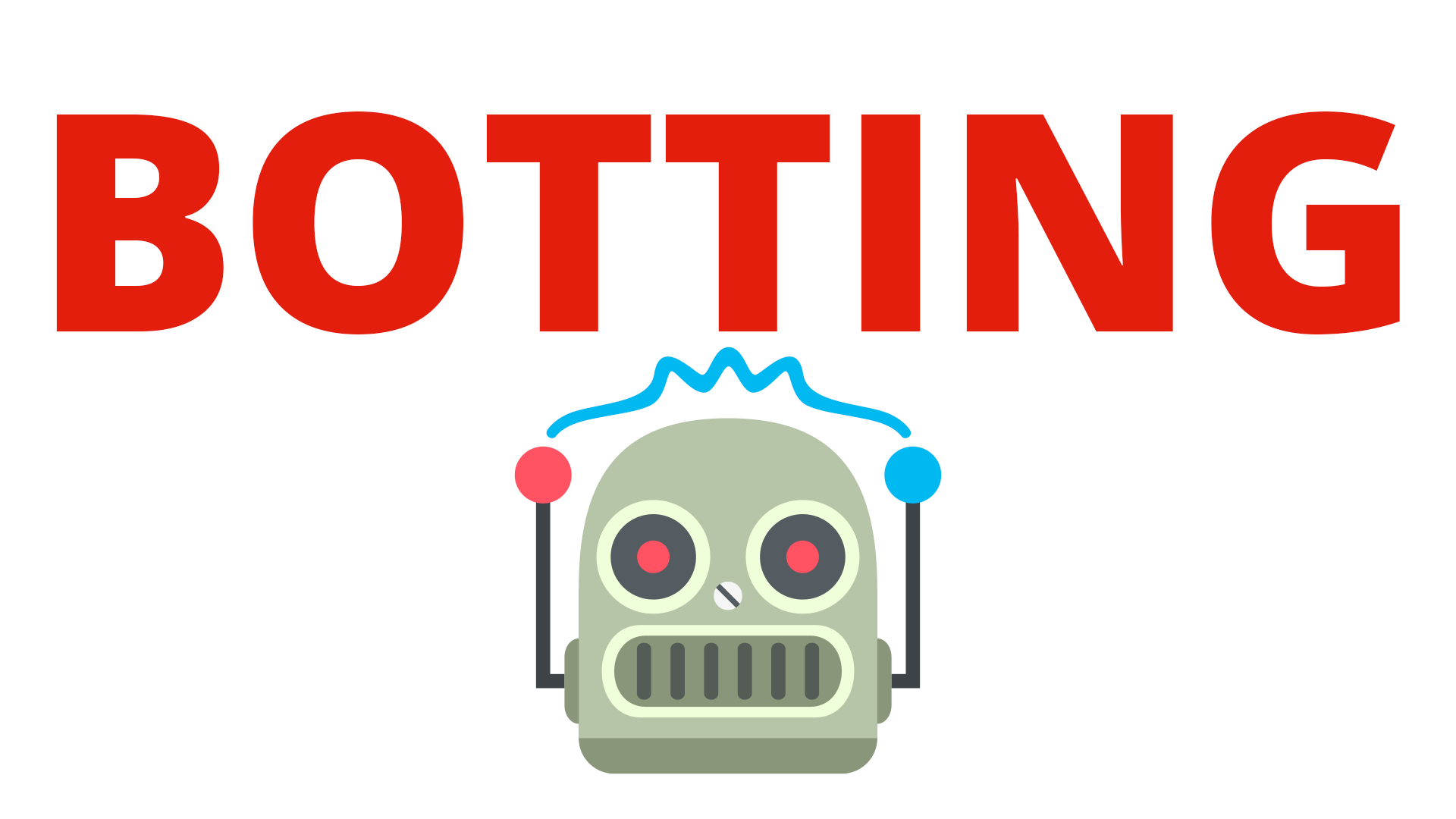 Some people might not even be aware, but Splinterlands has quite a bit of bots. They come in all varieties and play at every level. Although, they are probably more prevalent in the lower leagues. Let's talk about that.

Bots are Splinterlands accounts that are not played by humans, but that automatically join new battles and submit cards. The most basic bot would just press the battle button to select some random cards to play with. Of course, there do exist more advanced versions than just that.

How are bots created?

As Splinterlands is a browser-based game, it is not that hard to design a bot that can interact with the browser to play the game for you.

First of all, you need to know some kind of programming language. The most common one used for bots is JavaScript. Next up, you need a way to interact with the browser. For this there exist two prevalent libraries. Libraries are extensions to a programming language that add functionality to it. The two most popular ones are Puppeteer by Google and Playwright by Microsoft.

However, I would say that most people that do use bots in Splinterlands probably have not programmed them themselves. There are some free open source Splinterlands available on GitHub and there also exist some paid versions.

Once you have a bot up and running, it will start playing the game for you in the background.

The first time I picked up on this phenomenon, I thought that this certainly should not be allowed, as is the case with most games. However, Splinterlands has taken a different stance and the developers have publicly said that the usage of bots is allowed and that people using them will not get banned.

One thing that the developers are working on is preventing bots from ruining the game. If you're playing too often against bots or bots are getting all of the rewards, the game is no longer fun.

That's why some recent changes were brought as to how the lower leagues get rewarded. Chests no longer contain DEC, but credits in Bronze and have a lower chance of dropping cards. This of course greatly harms newer players, but also bots.

The developers don't want to start an outright war on bots because it's hard to determine who is a bot and who is not. They would rather focus their energy on bringing new features to the game. On top of that, they also don't want to ban people from using multiple accounts as people might want to play or an alt or have family members who play for the same devices or IP address.

On the other hand, bots can also have a positive impact on the game. they make sure that it's easier to find someone to play against, greatly reducing the wait times between battles.

How many bots are there?

A recent independent expert looked at Splinterlands and reported the following statistics: 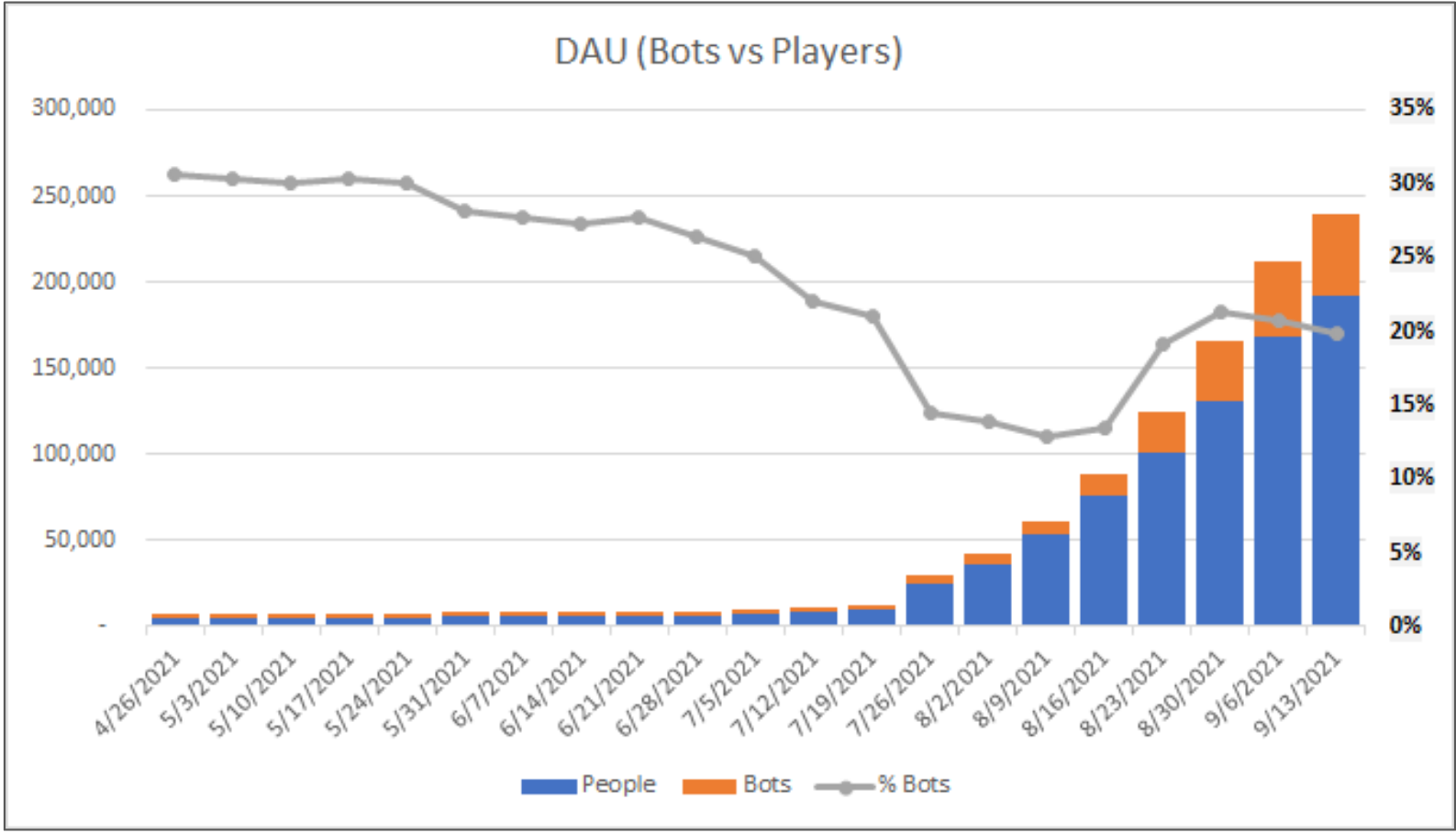 So around 15% - 20% of all active accounts were considered to be bots. This translates to about 50,000 bot accounts being active. Of course, a higher portion will probably be located in bronze rather than in champion.

Bots used to be very profitable as they could just farm matches in Bronze without making any investments besides the first $10 for the Spellbook. Now, these bots will have to invest significant funds to increase their collection power to 15,00 so that they at least can reach Silver. As they require a larger investment their ROI has also dropped.

Some people had huge bot farms with over a 100 accounts all funneling rewards to their owner.

50,000 bots means $500,000 in Spellbook sales for the game, so in the short-term, they have boosted the revenue for Splinterlands quite significantly. On the other hand, bot being too prevalent can certainly hurt the long-term success of the game. That's also the reason why they will try to make bots less profitable than before.

What are your thoughts on bots? Should they be allowed? Have you used one before?

I like bot; they give me easy wins since they don't seem to rent or use other cards besides the starter deck in the Bronze league. Of course it's boring if we face nothing but bots in game but they do add to the number of players we could play with.

Congratulations @solaito! You have completed the following achievement on the Hive blockchain and have been rewarded with new badge(s) :

I must say that I got involved in Splinterlands from the beginning and have decent decks that put me at least in Gold Leagues. Being there I am not affected in any way by bots and even when going up on the ladder from Silver the fights with the bots are mostly victorious. Probably they affect the lower league players which have weaker cards, but once you push over that the bots aren't affecting you as much.

The main problem I saw about bots was that they were syphoning, for themselves, a good chunk of the total DEC rewards, while barely owning any cards but the 10$ Starter ones.

Also, they had an unfair advantage by knowing the cards of 99% of the players beforehand due that weird option we had 'on' by default until a few days ago.

But I honestly think that Splinterlands solved those 2 problems really fast: they removed from the game the whole thing about seeing the other player's card; and they also removed DEC rewards from players without in-game assets.

Now, bots are good for other players: they have to purchase and hold assets to be able to receive DEC (thus increasing the demand and the price of those assets for everyone else), and they also are easily beatable as they'll end up being way worse at the game than an actual person thinking. For good players, bots became a punchbag.

I think if bot usage is allowed in any game it should be a built in feature, to make it available for everyone. Otherwise botting should not be allowed.
However the recent changes about the reward system should made it hard for the new bot accounts, although for older ones, i guess they can maintain their profitability with renting, without further investment needed. I appreciate that devs take care of bot problems.