Child Of The Forest - Storytelling Splinterlands is very popular as I've found several blogs talking about gaming app, I'm not good at playing games or else I surely choose this platform for play games.

It sounds like land is still in the beginning planning phases. Any idea as to when it's launching?

I'd imagine that more details on the first phase of land release will be included in the new Product Roadmap that they will probably drop in the next week or so.

Probably but the last roadmap said "full release of splinterlands land expansion" in the 4th quarter of last year so it's disheartening that we are now a full quarter beyond that and it still sounds like they don't know the basics about what it's going to be. Is it going to launch with guilds? Don't know. Is it going to require summoners AND monsters? probably but don't really know. I understand launches being late but at least have a clear vision on what it is you're trying to build when its 3-6 months late.

I get how frustrating it is to see land get pushed back so far. As a pretty big land owner, I truly understand.

However, if we hadn't grown as much as we did back in the summer of 2021, the Land development wouldn't nearly be on the same caliber as what it will be when released this year.

It would be selling for $20 still probably, and we would still have our average of 10k players playing still. We wouldn't have had Chaos Legion released, we wouldn't be talking about making Splinterlands be part of ESports, and we wouldn't be collaborating with some many awesome people/companies in the first place.

So please remember, when you talk about how long it has been since Land was initially promised, you can't forget about everything that was done to get where we are currently. And due to all that, we are going to see an amazing product that will not only be super valuable, but amazing to play with.

I appreciate the perspective. I know things have changed in the entire game and this will change plans for land but in December they sort of just stopped talking about the Q4 launch on their roadmap and started saying end of Q1. Fine, whatever, major project delayed. We've all been there but its worth noting we were months past the ramp up by then and already well into the Chaos Legion release and they were talking then about end of Q1.

Now as we come to the end of Q1 they are suddenly just getting very quiet about land. If my memory serves me, I don't think it's in the notes for the AMA at all last week and this week it makes it only into the Q and A section. Instead we're talking about board games and plushies and building a whole separate company for Warner Music.

All of that is great but land is the biggest thing to ever happen to this game or possibly any game and they don't seem to even know what it is they want to build yet. I question how much has actually been done besides some art. If I'm right, I don't see how we get to land this year and there's a good chance it doesn't come next year either.

I think the biggest thing to understand is that there are a few priorities over Land right now. I know it is not what you want to hear, but projects like Modern/Wild, SPS Validators, and new Reward Changes are more important short-term in order to keep players interested in the game.

All of those projects above are currently in-progress, but in-parallel with that, we do have a few developers solely focused on Land development as well. However, I wouldn't expect to hear too many updates on it, if any, until the other projects are wrapped up and released. Once that happens, then I think we quadruple the amount of development efforts and be full steam ahead.

Thanks for the chat.

I've been operating on the investment side of the game with the idea that land was coming soon because that's what was said. It's disappointing to find out that it's not.

And if we really are at a place where a bunch of other smaller projects takes precedence over land because we always need a new thing or people will leave, it's unlikely that when those smaller things are done there won't be new things to take their place. Patterns gonna pattern.

Anyway, at least I now know not to operate under the idea that land is coming anytime soon. That's helpful to how I invest going forward.

One of the best TownHalls ever, I'm really moved by both @aggroed @nateaguila chatter and weirdbeard energies. I think Fidel, as a crypto-native did really great talk on why Splinterlands is the locomotive on P2E. I'll make a very detailed cover of all things talked over 2.12 hours long stream!

Hope skins will be pushed out. It definitely will bring up the difficulties for the new players for which cards it's actually. I pakyed this game for around 2+ months, still not know all cards and I'm very active player. Then how about the new players?

That is exactly the balance that Nate and the Creative team is trying to find. They don't want to introduce skins that will distract players from the game, that is why they are trying to make them as simple as possible to still be able to tell who the character is. Look at the Hill Giant skin art. I believe each one you can still easily tell that the character is a Hill Giant but with different armor looks.

There could also be an optional choice to always show the original cards instead of the skins during battles.

Old lad here that never understood why anyone at all would be interested in skins but good to see folks are interested, good for the ecosystem :-)

I wish the Skin packs allowed you to preview the skins! Shop > Skins.... and no preview unless you pay the 2000 DEC or whatever it is per skin. What a stupid way to sell a product!?

We would love to talk about assisting with merchandise using our print on demand service on the Hivelist Store! If you want to work something out, let us know or contact @thelogicaldude

I'd !LUV to see this. Hive is a huge community. Collaborations like this will only make the community even stronger 😎 !PIZZA

Wow riftwacher in q3 realy long wait. But we can farm more sps)

So much exciting news! Thanks again for being so transparent about development - it's so refreshing to see in the crypto world!

Thanks for the hard work of the hold team.

I love that there are multiple utilities for the Waka card. I hope that sort of creativity doesn't go away just because cards are only being sold on the Splinterlands site.

I hope this update will help players realize to stop selling vouchers and SPS and start to accumulate them. Waiting for Riftwatchers and the SPS DAO!

Will any of the Legendary Summoners have these abilities? :D 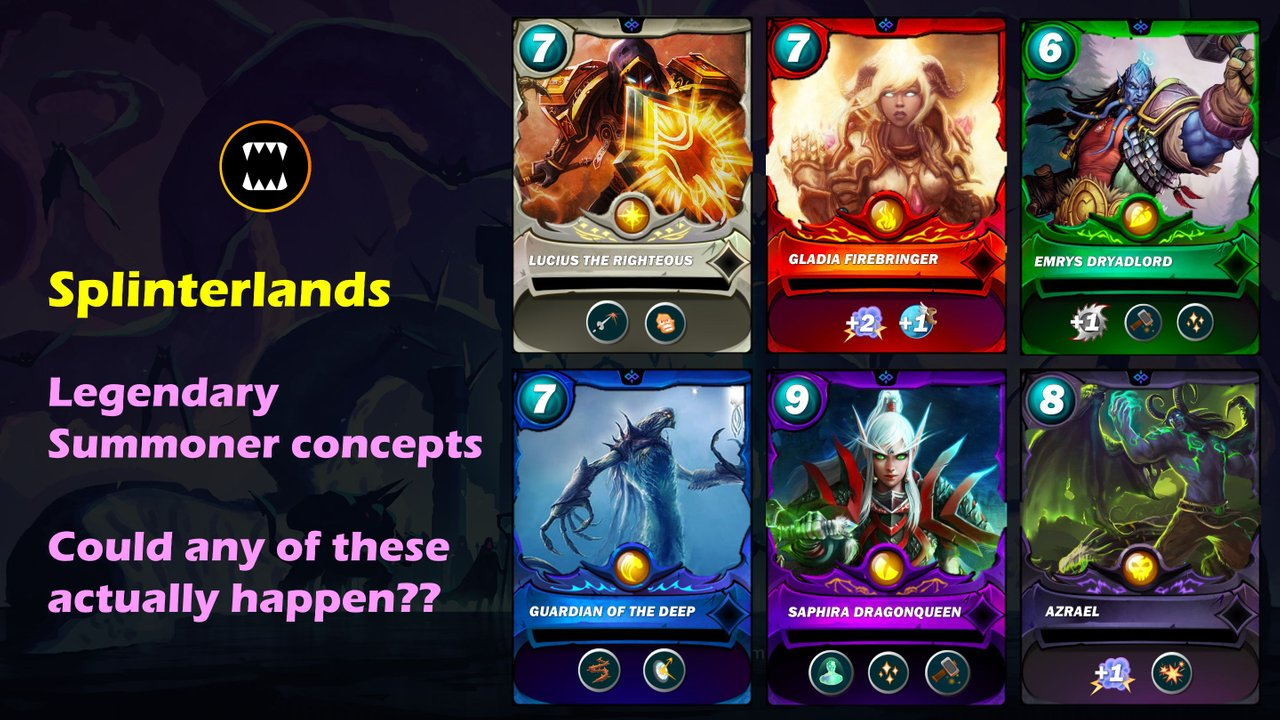