Last year the SilverGoldStackers Community held a number of Raffles and Auctions for use of the community owned Splinterlands cards try to raise some extra passive income to support the community curation project. The fundraiser was set up on the @monsterpit account and was moderately successful, however this time last year when the @monsterpit was set up there wasn’t an established rental market for Splinterlands cards and now it looks like a better passive income could be generated by renting out the cards individually via the new rental market. 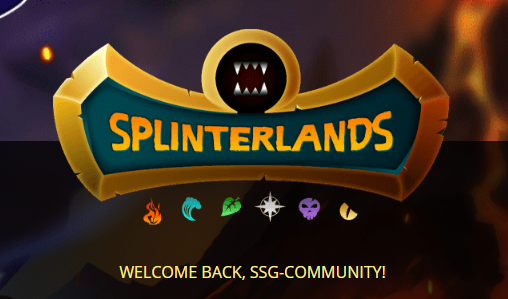 I have been studying the rental market for a month or so and while the value of the community cards has dropped back a bit since the launch of Chaos Legion, the cards are probably capable of generating a consistent 15-20% annual return on the value of the cards in their current state. With the cards current total value at about $10,902 that might equate to about $150 for 2 seasons if the current market holds – which is more than we were earning with our Raffles and Auctions last year.

So this proposal is to formally wind up the @monsterpit fundraiser and refocus the effort to generate income from the community Splinterlands cards via the rental market. This would involve renting the cards out and also selling, or trading some of the lower yielding cards for higher yielding cards. Revenue would be raised in DEC, converted to HIVE on the Hive Engine and withdrawn into the @ssg-community wallet so that it can be used to help pay for Hive Power leases that will aid the community curation project Precious the Silver Mermaid.

Please feel free to add your comments below and if you are a member of SGS, vote YES or NO to this proposal by adding your vote to the relevant comment. Voting will be open for 7 days from this post.

YES - Vote on this comment to support this proposal

NO - Vote on this comment to reject this proposal

I would have loved to have won one of those raffles and gotten the chance to play with this deck and received the rewards from it. With that being said, you are right in that renting out the cards will make much more for the project then the raffle could ever earn.

In a while we will all get Ragnarok cards. Maybe put them all in one account voluntarily and lease out or have a few people play .

I can't vote, but renting them out seems like a smart move if they aren't played. Why just hold them while they can make money in the rental market? If the deck is played, just keep the key cards, and make a nice selection of interesting cards in the rental market.

My experience is that the market has dropped very very hard, but I don't own a deck with that kind of value. Either way, if cards are unplayed I'd advise you to rent them out for sure to get some returns.

I'm a bit surprised that I'm still a member, so thanks for that (:
but I support the idea.

Just been getting back into hive and splinterlands. The market really exploded over the last year. Also set up a fully automated rental solution for my ex bot account aicu and getting my bot back up and running for some low level account experimenting. Interesting times.

If managing the rentals gets too cumbersome you could use my automated rental solution (free of charge, its not that impressive, just rents the cards out at the lowest bcx price and cancels unprofitables, posting auth only) and see how it performs :)

Also, like goldrooster mentioned, keep an eye out for the ragnarok airdrop.

Been a recent follower and do agree renting out the cards will likely earn more. I have also been watching the rental market as I lend out cards myself and found that rental market dip is hitting mostly alpha and gold foil cards the most. Apparently the 10% DEC bonuses are just not enticing enough to rent those cards at high DEC rates.

Dear @ssg-community, we need your help!

The Hivebuzz proposal already got an important support from the community and is close to be funded. However, it misses a few votes to get past the return proposal and your could make the difference!

You lead, i follow mate. We can always rent for a few season, see out a few seasons and reevaluate from there.

Id be hesitant to sell any cards to buy higher return rentals, just in case we decide to play the deck again and are missing a few key cards.

We still have the SPS income for a few more months, and vouchers to sell(or HODL).

Hopefully, we can sustain the ssg account for the foreseeable future...

How can one get the membership of this community and where to find out the procedure of providing the cards by the community members, benefits for the community for doing so, etc. I have some good GF cards.

I would have loved to have won one of those raffles and gotten the chance to play with this deck and received the rewards from it. With that being said, you are right in that renting out the cards will make much more for the project then the raffle could ever earn,

I am not a player but making use of a rental market seems a good thing to do. Gives you some deserved rest! Selling the cards when they are still hot could be a second idea.
@ssg-community, we need your help boss Thanks to support and sharing love this❤️

Even if you dont participate in rentals throughout the beginning of the season, make sure you do not miss out on the final day rental prices of each season. For example, I earned 4000 DEC today from Splinterlands card rentals, but on the final day of last season I earned over 24000 DEC in a single day from rentals.

Also DEC is currently paying over 200% APR if held for the SPS airdrop, less than 100 days left but is approx 60% return of value at this sps price. If you value SPS at a higher price, the APR of DEC increases accordingly.....