My daily task today was sneak quest and I successfully completed it.

Some of my battles today

Not the expensive and rich one, but the team prepared with a good strategy wins. Battle link 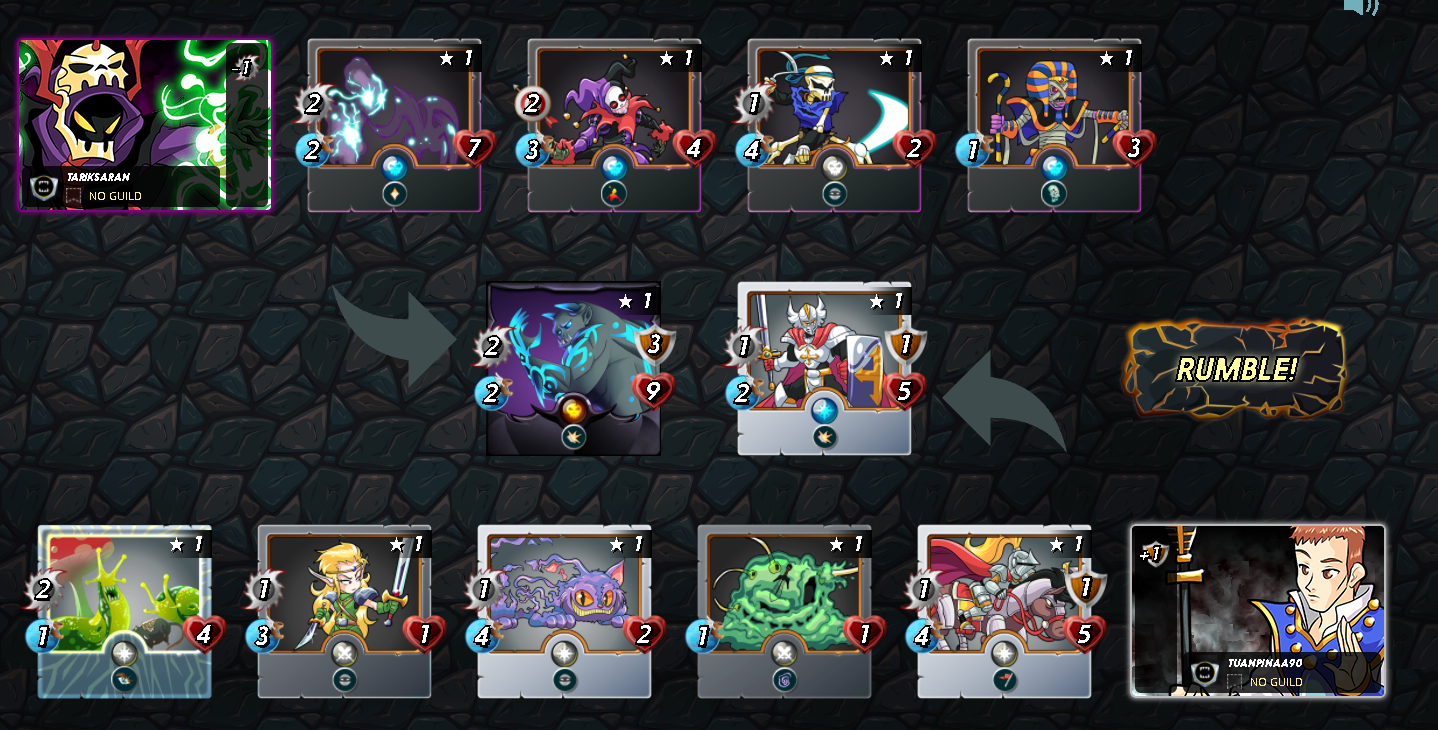 If Harklaw gets the chance, it becomes a stand-alone team. Battle link DJINN CHWALA
Dawn of the Djinn 4 of 4 - Only a short time after the Djinn were released, most of them were already seeing their elemental captivity as a blessing rather than a curse. They had far greater power than before, now that they were working with the force of the Planet at their backs. Pursuit of power was at the core of Belludae beliefs, so most of them would make small sacrifices for greater power.
The Djinn have not all found one another, and it will be difficult for them to do so since many of them reside in different elements. This is why several of the Djinn have submitted themselves as cards in the Moxian games, so they can connect with their lost brethren. Gradually they will come together to Praetoria as part of the last lines of defense, channeling the power of the Planet into an impenetrable wall to hold back the Chaos Legion.

1st level skill... When hit with a Melee attack, does damage back to the attacker. PELACOR BANDIT
Pelacor Descent 2 of 4 - One of the most peculiar things that happened in the Splinterlands was the rising of Solaki and Lunaki. These massive chunks of land uprooted themselves and detached completely from the Planet. They started on an upward trajectory, slowly drifting away until after a few weeks they were out of sight from the ground. The larger of the two was named Solaki, as it rose toward the sun. The smaller and darker was called Lunaki, which rose toward the moons. On Lunaki, there was a greater concentration of women, who became known as the daughters of the moons. On Solaki, there was a greater concentration of men, who became known as the sons of the sun.
After years of drifting higher and higher into the stratosphere, Solaki was discovered by the Angels who are said to reside in the Angel Realm of the stars. Humans and khymians were still thriving on Solaki at that time, with plenty of resources to make a comfortable home. Some of the Angels took a liking to the floating continent and began making regular visits. One deceptive male angel named Gytero began working on the minds of the men who ruled the solakari people, planting seeds of fear and paranoia. Gytero whispered that Solaki and Lunaki were drifting further from both the ground and each other, so precautions must be taken to ensure the continuation of their people.
The male rulers of Solaki, under the evil guidance of Angel Gytero, instituted a system of compelled procreation, essentially enslaving the women of Solaki. The women fought back, but they were overwhelmed in numbers. Finally two heroes from the Angel Realm came to the rescue of the last solakari women. They started a war that is still raging today known as the War of Sons and Daughters.

1st level skill...
Targets the last Monster on the enemy Team instead of the first Monster.
Has an increased chance of evading Melee or Ranged attacks from Monsters who do not have the Flying ability.

The approximate market value of the NFT cards I received as a reward after completing today's daily quest: $5.5.

I have found that Djinn to be quite the useful card in some fights, was worth grabbing and using. Just slowly working up collection power towards silver 3!