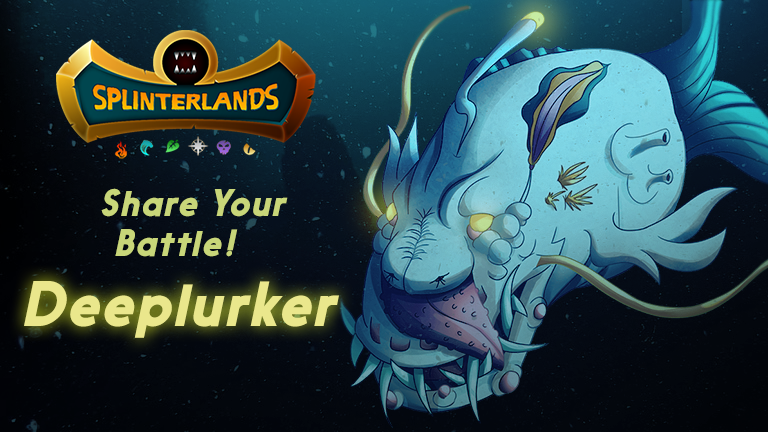 I really like Deeplurker. It is a must to use in nowdays water teams (at least at my level).
It's Opportunity ability shines in every match. I think this is one of the best widely available abilities.

It is a common Chaos Legion card therefore everyone has it because it is part of the basic cards. As you can see in the table below it is a quite expensive card as both a regural foil and as a gold foil. I think the market knows that this is an excellent card. There are a lot of available copies at the moment.

I was in silver 3 at the time of the battle. I had one of my favourite rulesets. I really enjoy playing 99 mana battles. In these battles I can experiment and use all or any of my high mana cards.

So what did I chose to do?

For Summoner: BYZANTINE KITTY I had a lot of rented cards at this time and I used them in this battle starting with Kitty. I chose it because it only gives buffs so I can concentrate on what I know about the battle and not trying to figure out what my enemy will do. So it will boost my team with 2 more speed, - remember speed is your friend, except in reverse speed games - , it will heal my tank and makes my monsters never miss. (This can be a huge advantage as you can see in the replay)

Yes, I won the battle. My enemy had a lot of magic attack, they can kill almost any monsters in one turn, but his Axemaster could miss, and I think that was one of the key moments of the battle besides my Djinn did it's job with Void and Deeplurker lurked his Venary down. Given this ruleset I would not change my lineup. I think I prepared my cards against melee and magic well. I think high damage ranged monsters could cause more trouble for this lineup.