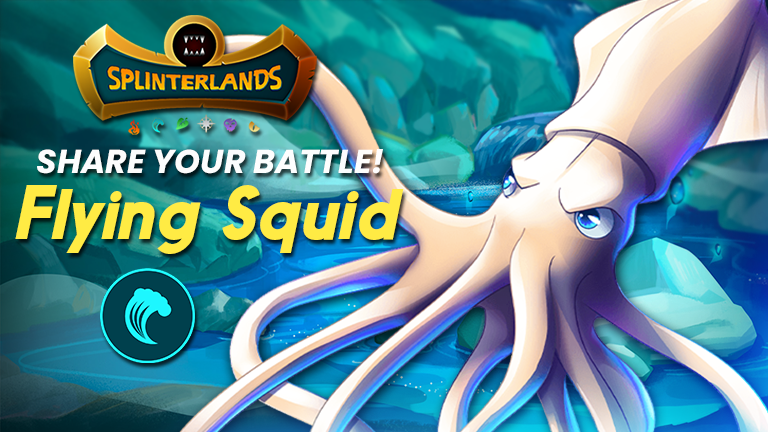 Although Flying Squid are not truly capable of flight, their moniker comes from their ability to launch themselves from the water and glide above the surface for long distances before resubmerging. These aggressive predators shoot ink into the eyes of their prey to blind them before attacking with their lengthy tentacles.

I really like Flying Squid due to it's high health, moderate speed, Reach ability and decent damage. But I think it is only usable in mid to high mana battles. In the old format I only used it in my Water team if the rules did not favor magic damage. Because I think in mid to high mana matches there are a number of better cards, but if you have to use melee, than it's a really good card. With the new Modern/Wild ranked system I'll use it more often than before.

It is a common chaos legion card therefore everyone has it because it is part of the basic cards. I personally do own multiple copies of it. As you can see in the table below at the moment it is not a cheap card as a regural foil neither as a gold foil. These numbers show that others think that this is a good card too. There are a lot of available copies at the moment.

I was in gold 3 at the time of the battle. I had Water focus. As you can see I had a nice ruleset. Kelya Frendul gives +1 speed and +1 shield. I think this is my favourite summoner from the basic Chaos Legion summoners. I think it's benefits are really great for any kind of monsters. This summoner only fails with Reverse Speed ruleset in my opinion. I had Water focus and it was a Modern mode battle so I did not have too much choice. I do not own it, this level 3 was rented out by me. I think level 3 summoner is a minimum for gold league battles, sometimes it's not enough. This is the best widely available Chaos Legion tank for Water splinter, imo. I like to use it in mid to high mana tier games. It has high health and shield, so it is durable against both normal and magic damage. Additionally it has nice speed and damage as well. It's ability can be really useful, but a real situational one. I own a level 1 copy and this level 3 was rented. This weeks challenge card. As I stated above in mid to high mana battles and in the new Modern format I'll use this card very often. It has high health, it can act as an off tank, thanks to it's reach ability and health. I was renting this level 4 copy. Deep Lurker one of my favourite CL Water spliner cards. I really like it's ability Opportunity. It has a nice healthpool, relatively low speed and decent damage. I have a level 2 copy of it, this level 4 was rented. I use this card in almost every battle it fits well in almost every mana cap. I use it a lot. Water Elemental it is a really good card, recently I used it a lot. Now with modern I think I won't use it as often. It can be a really nice offtank in the last position due to it's Heal ability, high speed and decent health. It has good damage as well. I do not own a copy of it, I was renting it. It can be used in almost every battle due to it's low mana cost, I think it is an overpowered card. I usually chose this over higher mana cost cards because I think it outshines them. A really nice Reward card. I really like it because of it's speed and Double Strike ability. It can deal 4 damage in 1 turn. It's really-really good for 7 mana. I think it's a mid to high mana cap card. It does not have that much health so it should not be placed last if you expect big damagers although it can give some misses. This is my own copy. Poseidon a nice legendary card for 9 mana from the Dice set. It has nice healthpool very good damage and a rare ability for rangeds the Shield. This makes it an exceptionally good off tank for the last spot. It can trick a lot of opponents and defend for a while against Sneak damage. I was renting this card. I saw that my enemy uses Death teams and Thaddius Brood summoner. I did not bring any magic damager because of this. So far everything went according to my plans. As you see 5 turns have passed, monsters gained buffs and debuffs in both teams. My team started the battle because we had more speed.

In the first round 2 of the enemy monsters died. Because of my high damagers and speed advantage. My tank had some damage but still holding up. After the first round it was clear that my team will win.

In round 3 my team was still complete, but the enemy lost another 2 monsters. In this round the enemy monsters could not deal any damage.