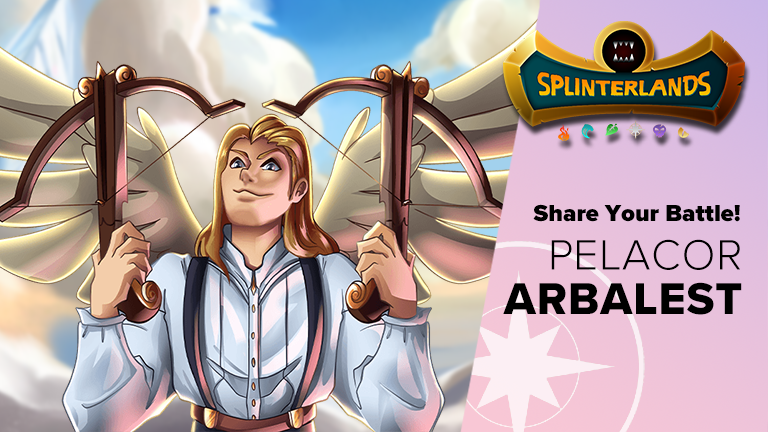 Pelacor Arbalest is a really nice ranged monster with a very powerful Double Strike ability. At level 1 for 6 mana you get 2 damage 2 speed and 2 health, but this 2 damage could be 4 most of the time. It's downside is the low healthpool and low speed, I saw a lot of battles when it was misplaced and killed without firing a single shot. It can be easily killed by an Opportunity ability. Correct placing and buffs can help to survive the battle.

It is a rare chaos legion card therefore everyone has it because it is part of the basic cards. I personally do own a copy of it. As you can see in the table below at the moment it is a not too expensive card as a regural foil nor as a gold foil. There are a lot of available copies at the moment.

I was in modern format silver 2 at the time of the battle. As you can see I had a challenging ruleset.
Rules: I have the General rented out at level 3 so it was an obvious choice to put it into the battle. As a level 3 it allows me to bring commons up to level 4 and rares up to level 3. You'll see that I used this to my advantage. Additionally it gives + 1 ranged damage and it boosts this weeks challenge monster a lot. It is the tank of the life team in Chaos Legion. I'm saying this because it is a common card so everyone have it from the get-go. Plus it has armor, decent health, damage and speed. It's main advantage is it's ability: Shield. For non-magic damagers this is the best tanking ability. As you can see I used a level 4 copy which I was renting at the moment. Chaos Knight alone won't solve all the problems, but if you support it with the right cards it can be a really though opponent. Speaking of supporting the Chaos Knight I meant this. The Crystalsmith a good ranged reward card. It has the Tankheal ability which speaks for itself. Due to being ranged it gets +1 damage from the summoner. It is at max level as the summoner allows. It has decent health as well. Earlier I spoke about the Opportunity ability and now I'm bringing it to the battlefield. At level 3 Harpy is a really nice card it has 2 damage, so it can kill some monsters in one "shot". It has low mana cost and for that you'll get a lot 2 abilities good damage, speed and decent health. Here comes this week's star the Pelacor Arbalest with Sloan as summoner and enough mana cap it is a nobrainer to bring this card into the battlefield. In this battle it can have 6 damage in one turn for 6 mana. Thanks to it's being a level 3 it has now 4 health which can be enough to survive 1 attack.

The Even Stevens ruleset narrowed my choices down, but I think I managed to prepare the best possible team. 2 out of 4 cards gets a buff from the summoner all of them are at max level for the summoner. They can bring a massive 14 damage in one turn. Meanwhile my opponent's monsters can onyl deal 8 damage. My monsters have 17 health and 3 shield. The opposite team has 19 health. I think the numbers are on my side. But it's a huge advantage that my enemy has only level 1 cards.
Now let the battle begin.

In the first round 2 of the enemy monsters died. My enemy's tank and off-tank is dead. My main tank holds steadily. And you can see that my team devastated the enemy team thanks to the level advantage. It is clear now, that round 2 will be the last. I was lucky with my opponent it could have been much closer battle. I like it Double Strike is a really good ability, but it can be easily killed if misplaced on the battlefield. But if you put it in the right place or defend it some other way it can be devastating.