How Splinterlands Tournaments Could Be Additional Income

I haven't been playing in Splinterlands tournaments for awhile but the last month, I have been trying to join a few if the entry fee isn't too high. Most of the time I pay around 20 SPS or under for each tournament I enter and hope for the best I get a good placing and get something back. Tournaments are a great way to see how strong your cards are with and with my summoners at level 6, I don't normally have too high placing. I also learn a few things from each tournament to see what combinations would be useful for my splinters. With my more new faces in the game, you are faced up with more creativity on how people put their line ups and its pretty interesting when I see some matches. 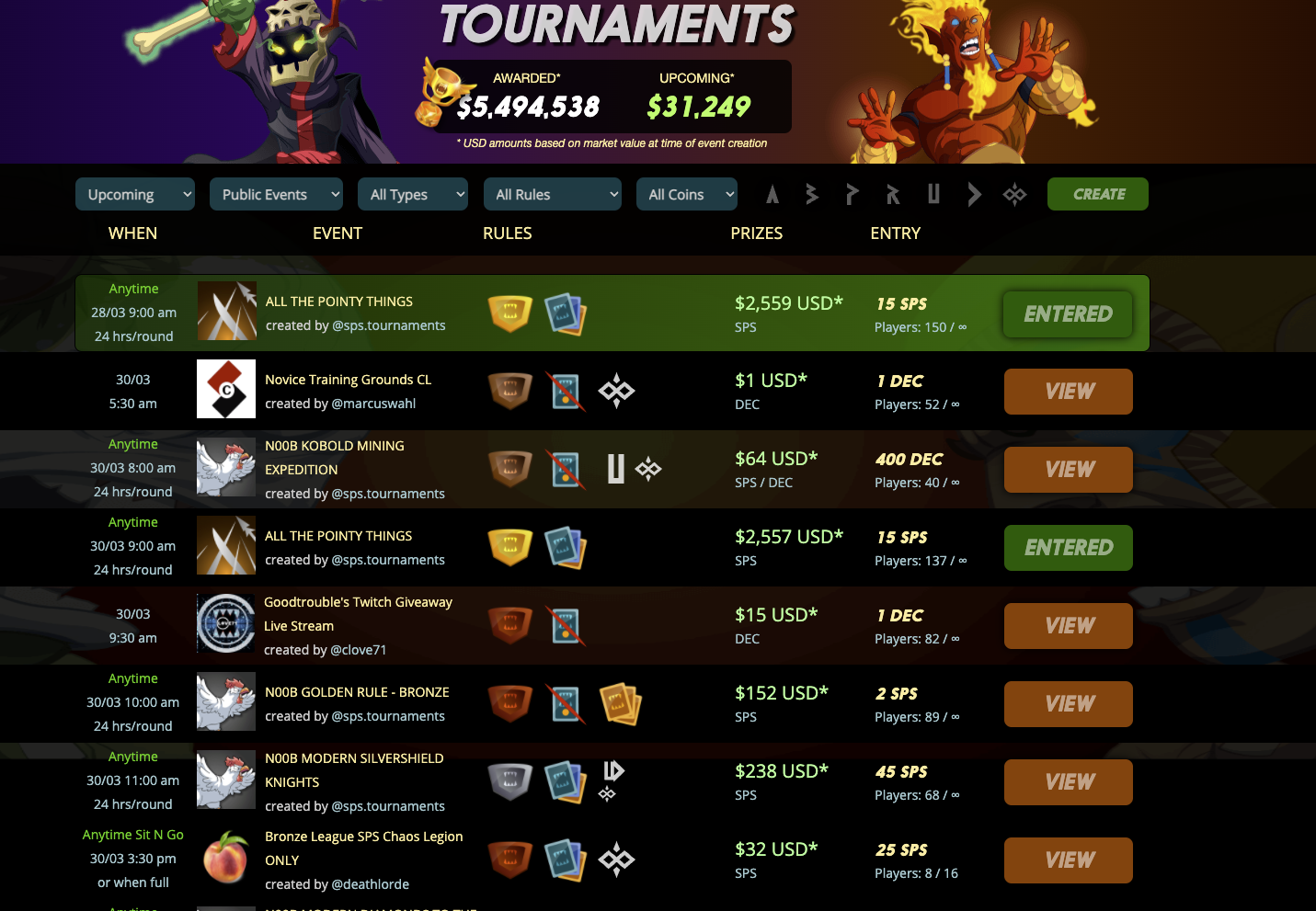 In the last month, I have tried various tournaments ranging from Alpha cards matches to diamond league and I found I get better placing in silver and alpha card only games. Prize money could range from 2 SPS to 164 SPS. Below is a list of the entry fees I paid in SPS - as you can see in March, the lowest entry fee was 2 SPS and the highest is 15 SPS. Depending on the tournament, I've paid 20 SPS in Feburary. Another thing to note is that I just join tournaments whenever I remember to check and I don't enter to everything. In the month of March, I have spent 87 SPS in entry fees which is around $9.50USD with the SPS price of 11c.

Looking at what I have won in prize money in March, I received a total of 349.6 SPS which equals to around $38.40. I do better in Alpha games but unfortunately those tournaments have much lower prize money that others or else I think I would have done better in terms of prizes. After paying entry fees, the total SPS I won for March so far is 307.6 SPS which is approx $33.80. No bad for a few tournaments over the month.

I can understand why some of the big players would try to go into as many tournaments as they can to get a chance getting those nice juicy prize money. It also makes sense for some to rent cards to be in tournaments provided the prices of rental is reasonable (ie not end of season). I think for April, I would probably rent a few cards to compliment the cards I have and see if I can get a better ranking, though it could also depend on luck as you may be paired up with some powerful players and that would reduce your chance of moving up those ranks and get a share of the prizes. With already more than $5mil of prizes awarded, there are still plenty of opportunities to start joining these tournaments.

If you haven't joined Splinterlands yet, join here check out one of these tournaments, there is something for everyone.

Honestly, all this jargon sounds, of course, gibberish to me. 😁🤣 @travelgirl Maybe because I am not into it yet. Even though I'd love to, I have not found someone to put me through the basics. Most people just say you have to just get it and grow..though I agree but one still needs some intro.
What does that SPS mean by the way? And I am seeing tournament too? What kind of game/sport is played?

SPS is one of the tokens in the game Splinterlands which is a game on the Hive chain. There is a great FAQ section there in the game with lots of great articles written by the team and community. Tournaments can be played once you have enough SPS staked in your account plus the level of cards to participate.

You can check out the game here and join: https://splinterlands.com/?ref=travelgirl

Okay then, I will check them out one after the other. Thanks for your help @travelgirl