Splinterlands NFTs - How Are They Doing Now?

1 week ago, the first Splinterlands NFT was introduced to the players and in an instant, they became a big hit. What was exciting was the long holders of SPT can finally find a great use for these valuable tokens and not only hold them for the SPS airdrops. At the time of writing, there were only 3 NFTs available and I wrote about them in the post here. Since then, the Splinterlands team have put in a few more up for sale and many of them are very rare with only a handful of them available. Unfortunately I didn't have enough liquid SPT to buy any since as I power most of mine up previously so by the time I'm waiting for those curation rewards to payout, the NFTs that I wanted have all sold out with the only ones left are from resellers. I was very curious to see how they price a week later so let's have a look now.

The first one I spoke about last week was the Head to Head. This NFT at the time had the least minted with 30 available selling at 8000 SPT. If you look at the market now, the same very NFT, the cheapest on the market has a selling price of 30000 SPT which is approximately $420USD. In a space of 7 days, it has nearly 4x in price and if you have a particular edition number you want, you probably need to pay for a higher price. 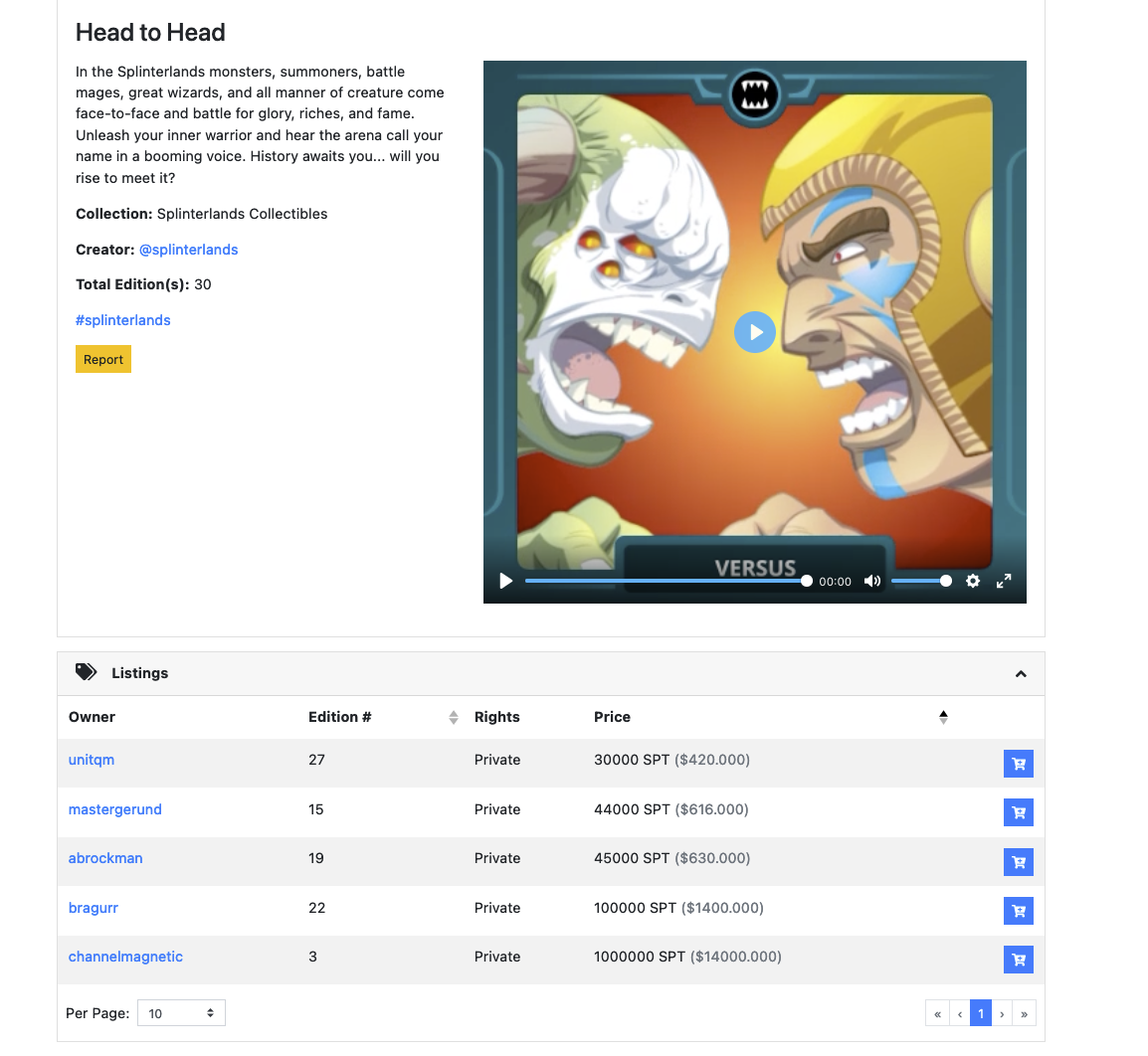 Next was The Good Stuff. It was selling at 5000 SPT when I wrote the article last week but I was sure it was cheaper when it was first one sale. Now this NFT is 20000 SPT (approx $280USD) cheapest on the market with the second cheapest jumping to 30000 SPT! That is another 4x on this NFT in 7 days. With 75 of these minted, a 4x return if it does sell is a pretty nice profit there. 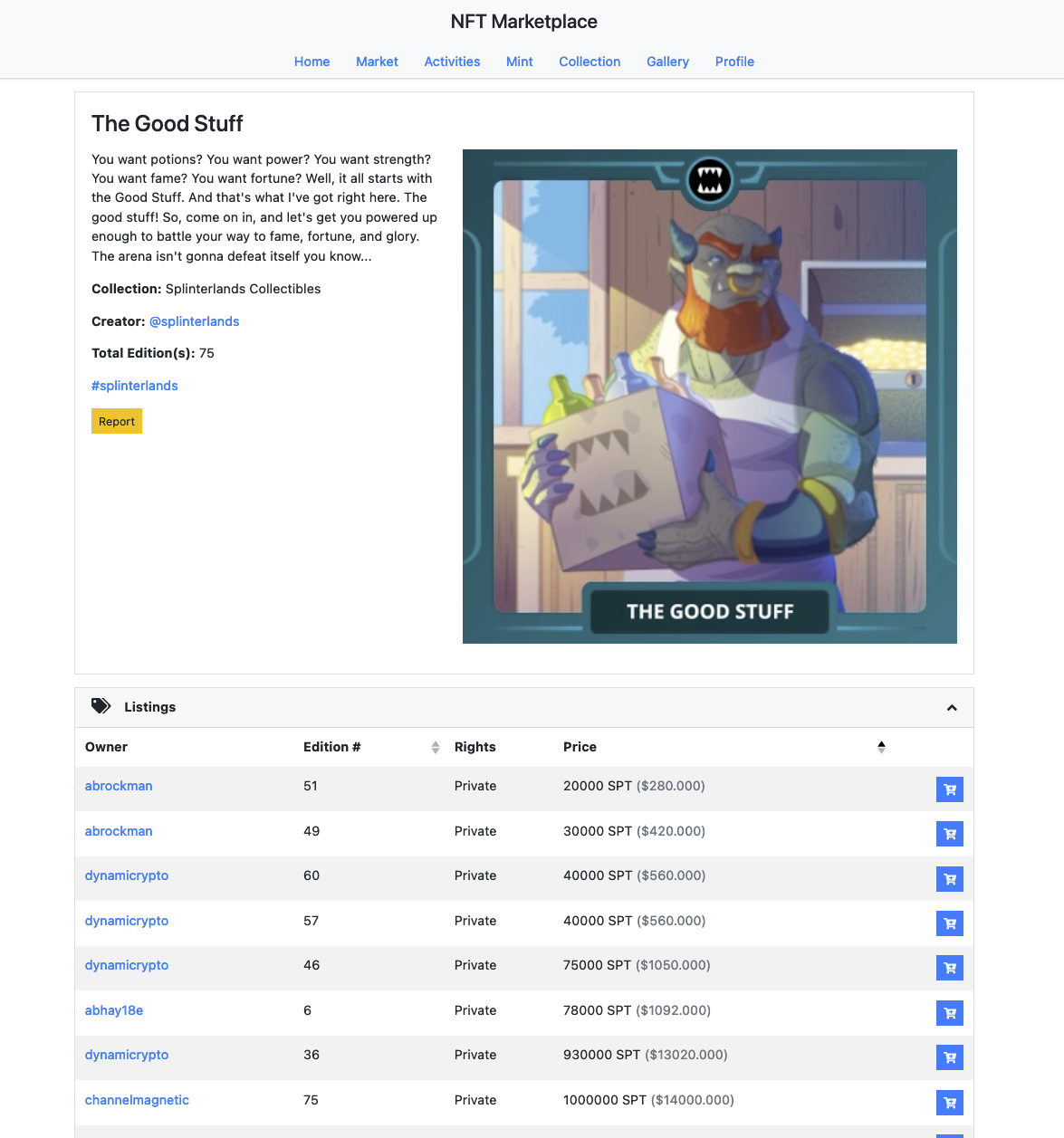 Lastly, the first ever NFT put up was The Untamed which was also selling at 5000 SPT at the time of writing last week but it around 2000 SPT when I first saw it from memory. Now this very same NFT is selling at 14500 SPT at the cheapest (approx $200USD). With 100 of these minted, the resell price is pretty similar between sellers but still a nice little profit from 7 days ago. 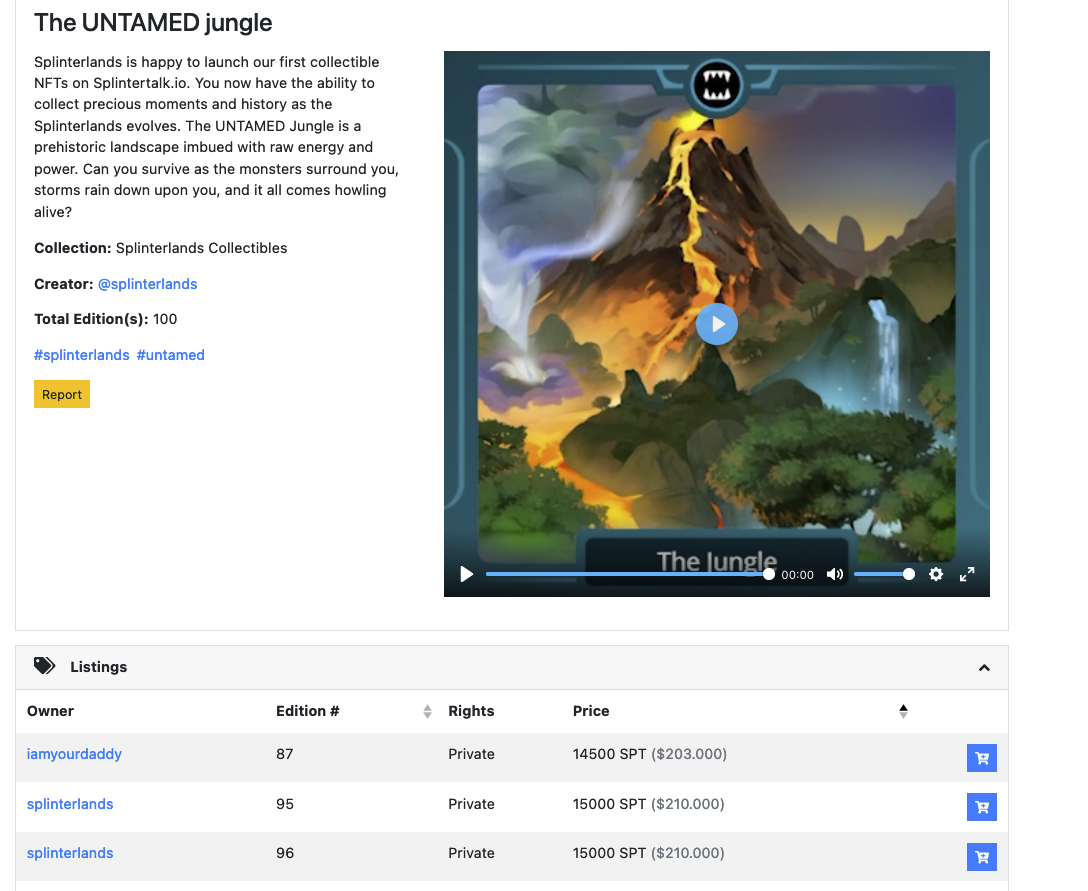 SPT have now been a star the last week not only needed to buy these limited edition NFTs but they are also eligible for the airdrops, people are starting to realise how valuable they are. Currently selling at 1.4c each on Hive-Engine, it is trading nearly 3 times more than the DEC price each. I love how this sleeping giant have woken up with a loud roar and I look forward to seeing more use case for SPT in the future. Early supporters of this token have been waiting for too long but this wait is well worth it. Have you bought any Splinterlands NFT recently?

If you haven't joined Splinterlands yet, join us here and join in the fun! 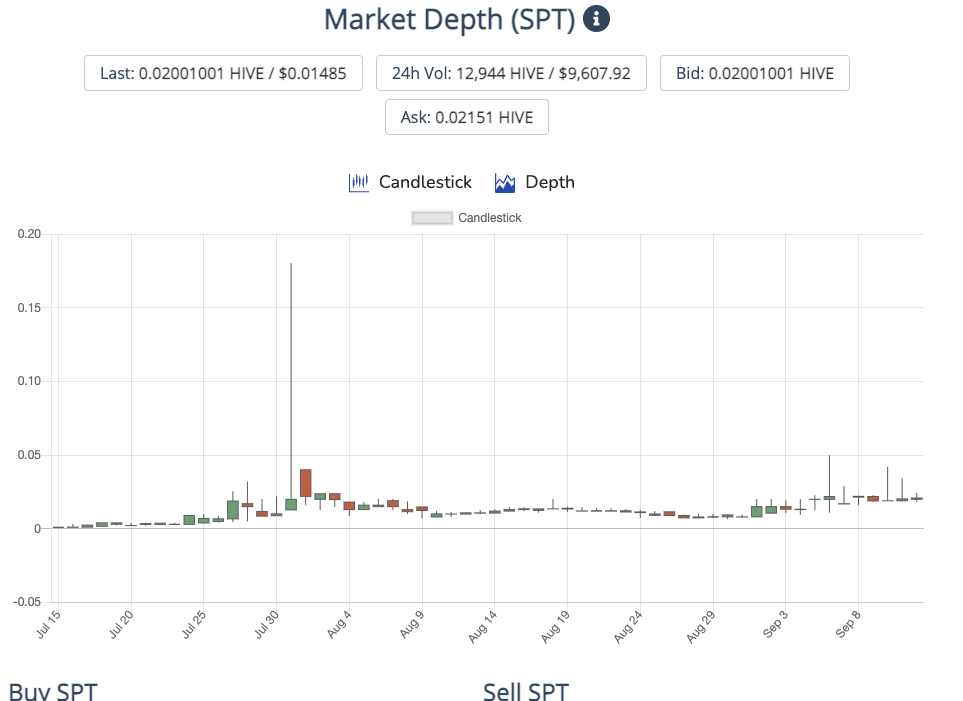 I had a feeling these would go up in value just thought it would have taken a little longer. Crazy how high SPT tokens price has gone up.

I saw the price starting to increase as I was buying and I wish I would of bought more before the announcement of the NFTs because SPT is mooning.

Same I’ve been staking a pretty good rate. The fact that it’s appreciated so well plus you get the SPS credit is well worth the cost.

It’s a bit crazy I have to admit

Thanks for the information, didn't know that Splinterlands sells NFT!

Yepppp and still got snapped up so quickly 🙈

Huh, I had no idea these NFTs even existed. I have a ton of SPT that I could have used on them.

Congratulations @travelgirl! You have completed the following achievement on the Hive blockchain and have been rewarded with new badge(s) :

@travelgirl, you've been given LUV from @coolpoolparty.

@travelgirl! I sent you a slice of $PIZZA on behalf of @coolpoolparty.

Did you know you can earn $PIZZA daily by delegating HivePower to Hive.Pizza? (1/10)

Hey @travelgirl, here is a little bit of BEER from @coolpoolparty for you. Enjoy it!