@vyse 44
about 1 year ago
Splinterlands 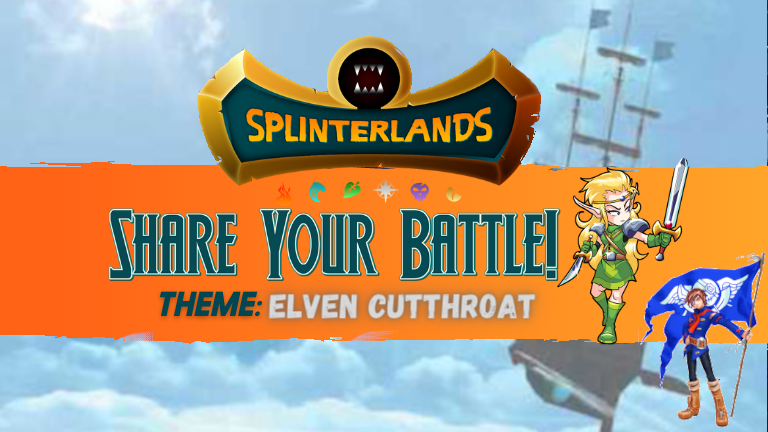 Today I am going to share a battle with this week's featured monster, the Elven Cutthroat.

The Elven Cutthroat is a very accessible, simple yet effective monster. The only ability it has is Sneak but with higher speed, decent attack, and low mana cost, it is a nice card to have in your deck.

In this battle I was given the ruleset of Heavy Hitters and Up Close & Personal with Fire and Life splinters available.

In either splinters I don't have any solid melee monsters with stun so I was not able to utilize the Heavy Hitters ruleset but my general strategy for Up Close & Personal is to have a high health tank up front and then use monsters that can attack from the back line (Sneak, Opportunity, Reach). Even if they are the highest leveled cards, I'd rather have a monster doing 2 damage every round verses 4 damage only when it is at the frontline. In this battle I used Sneak monsters to focus on the opponents backline

For my tank I chose the Silvershield Paladin. I chose the paladin for the high health, good amount of armor, and the Shield ability, making it a solid tank without costing much mana. Another good option could have been the Shieldbearer, as the taunt can mess up the opponents sneak and opportunity monsters. I wanted to use the mana for other monsters though.

Next in line I used the Luminous Eagle. Even though I only have this monster at level 2 (which is low of Gold League) I still felt it was a solid choice with the Reach ability to allow it to attack from the 2nd slot.

In the 3rd slot I started bring in my Sneak monsters with the Sand Worm. Again not fully leveled but the high Sneak damage the Sand Worm brings is devestating at any level.

Slot 4 I brought in a truly fantastic Sneak monster with the Silvershield Assassin. With the Double Strike and Poison, this monster can obliterate the backline very quickly. One of my favorite cards.

In slot 5 we have the star of the show, the Elven Cutthroat! With only costing 3 mana but still having 3 attack makes this monster and great add to my Sneak focused team. Also the high 5 speed of the Elven Cutthroat helps cut through any possible armor that the opponents monsters might have, making room for the Sand Worm to be able to do full damage to the health.

Lastly, in slot 6, I brought in the War Chaang. Sadly I only have this monster at level 1, but I still love it for the Up Close & Personal ruleset. One the added range attack lets it have at least some attack happening from the backline. What I really like about it though is Retaliate ability. That ability combined with the higher health helps to keep my backline protected while at the same time having the chance to do damage back to any Sneak monsters the opponent might have and help get rid of them quickly.

Congratulations @vyse! You have completed the following achievement on the Hive blockchain and have been rewarded with new badge(s) :