So the popular Ethereum play2earn game Axie Infinity is back in the headlines, with one of its native token AXS cutting it losses by as much as 60% in 10 days. As per data from CoinMarketCap, AXS price today pumped to as high as $73.91 before receding to the current $70.72. AXS serves as the Axie Infinity's governance token allowing its holders to float proposals or vote on them regarding future direction the game would take.

There are several factors fueling the AXS upward movement, with primary being the recent announcement by Axie Team planning to give AXS token holders control over game's $1 Billion treasury. Axie Infnity's team plans on to hand over the control of treasury reserves to community step wise. This can essentially be seen as progressive decentralization, with community finally gaining the full control. The community(AXS) will be able to vote for the changes, future developments, utilisation of treasury funds etc. 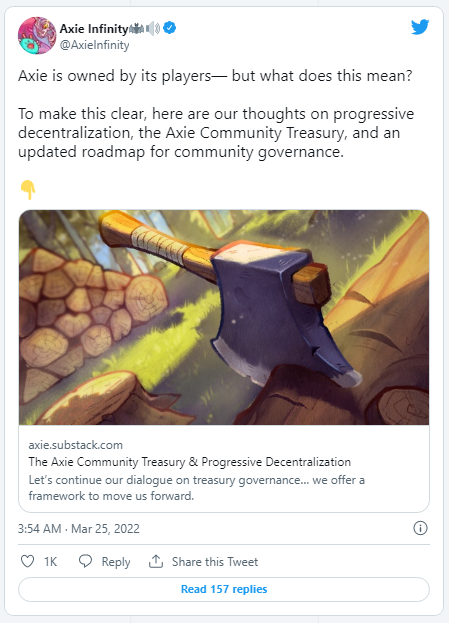 Another important factor contributing to AXS rally is the upcoming major Axie Infinity upgrade, 'origin'. The Origin upgrade which is expected to go live in coming weeks is touted as one of the most significant upgrade so far, promising renewed gaming experience by revamping of game mechanics, new reimagined storyline and new in-game items etc. Moreover, Origin will also offer free starter Axies, in a bid to reduce entry barrier to new users.

Meanwhile, Axie Infinity user base continues to grow reaching all time high of 207,395 users, as per data from Dune Analytics. The increase may not be as prolific as in mids 2021, but still is steady enough to be significant. Apart from active players, AXS is also popular among non-gamers as the game offers 74% staking reward. As of now about one third of AXS circulating supply has been staked onto the the in-game staking protocol.

Among all of the above factors driving the bullish sentiment of AXS, the decision of Axie Infinity's team to hand over the control of fat treasury to the users is the most significant one. After all it is not easy to let go of the control, especially when that much money is involved. It is also an indicator of the trust Axie Infinity team have in their community.

Watching Axie moving towards decentralization, makes me wish Splinterlands could also move towards community governance soon. Almost two third of the SPS token airdrop is done and with land deployment drawing near, now might be a good time to announce decentralisation plans. This will give SPS the purpose it was created for, other than being a tournament entry requirement or vouchers airdrop parameter.

Free starter axies sounds interesting, may make this game explode as there are so many people who want to play but cant due to the high entry cost. Scholarships are a joke too with the owners either wanting most of the earnings or ridiculous amounts of personal info.