Splinterlands Game Play - Some Tips And Tricks For Beginners

If you have been following my blog I guess you would have been expecting this post for some time now, very sorry, the holidays ending and preparing for a new school term for my kid took a better part of my time.

However, if this is the first time you’re bumping into this chain of posts then I would please suggest you read the first, second, and third parts of this topic before reading this post so that you get the whole meat of the gist.

Tips and Tricks 2 – Spy on the enemy

Tips and Tricks 5 – Level up your Summoners and Monsters

”1 - Back to Basics: Monsters lose all abilities”

Monsters lose all abilities means there is no sneak, snipe, or reach abilities and this means monsters are not jumping all over the place. There is no self-heal, tank heal, magic reflects, shield, stun, poison, thorn, retaliate, and a host of other abilities.

This is one of the rules you see fighters at all levels making a lot of mistakes on and about how to fight the battle because of the way they arrange their monsters. You can clearly see sometimes through their arrangements that they forget there are no sneak or snipe abilities and this keeps such monsters dormant till they get to the front row where they are easily eliminated.

The best strategy IMO to fight this type of battle is to use monsters with a high Magic attack hit and place monsters with huge health and low mana as possible as a tank, it doesn’t matter if the monster doesn’t have any weapon of attacks like Peaceful Giant or Gelatinous Cube, as long as they have huge health then that is cool as they may still be standing even after the 2nd or 3rd rounds.

The best Splinter to do battle with this ruleset is the "Water Splinter” because the Summoner “Alric Stormbringer” gives +1 Magic attack to all friendly monsters, you get even more power when you use the Legendary water summoner “Valnamor” which give all monsters +1 Magic attack, +1 Health and +1 Speed.

The Magic attack monsters have three very important advantages in the sense that:

They attack from every position including the front row.

Thirdly, magic attack monsters ignore the armor of a monster and hit the health directly.

In a situation where the Water Splinter is not available another Splinter one can use especially if your opponent monster doesn’t come with armor is the "Earth Splinter”. The Summoner “Lyanna Natura” gives all friendly monsters +1 Health. And if you use the legendary Summoner “Prince Rennyn”, it gives +1 Ranged attack, +1 Health, and +1 Speed. You can use a combination of magic and ranged attack monsters to do battle. 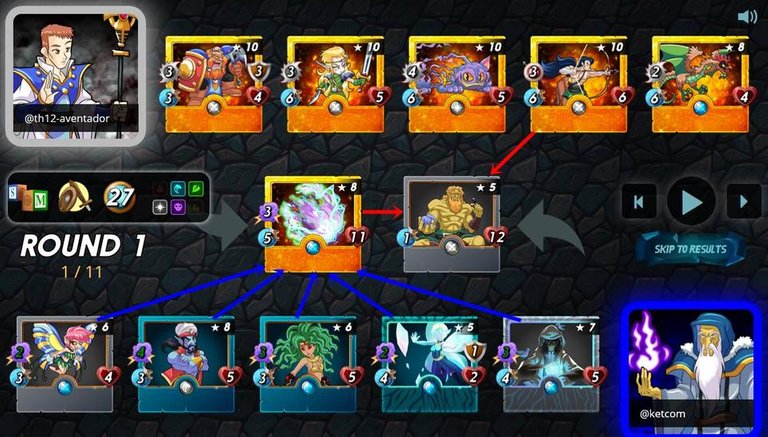 Notice that the “Armor” given to the enemy monsters by the summoner were in effect in this battle as Magic attack monsters attack the health directly.

Notice also that my enemy had all his/her monsters all at the max level while mine were not at the max but that didn’t stop my monsters from giving the opponent a quick and decisive blow.

”2 – Melee Mayhem: Melee attack Monsters can attack from any position”

For this rule of a combat Melee attack, Monster can attack from any position so you should have a strong resilient tank. You should also consider your defense. Your defense (I mean the last monster) can be your Achilles heel (a weakness or vulnerable point) from where you can lose the battle.

I have three splinters I like using to fight this type of battle:

The Fire splinter gives a +1 Melee attack to friendly monsters so it is obvious it is the first splinter to consider.

The Life splinter gives a +1 Armor protection which is an added advantage as the attack needs extra work to take out a monster, so, it is my second-best Splinter to do battle with this set rule.

The Death splinter is another option as it reduces the enemy Melee attack by -1 and it also has some mean Melee Monsters to contend with.

I drop some tactics for the fire splinter and sample battle with the life splinter here so that you can develop a strategy that is even better.

Plagiarism is the copying & pasting of others' work without giving credit to the original author or artist. Plagiarized posts are considered fraud and violate the intellectual property rights of the original creator.
Guide: Why and How People Abuse and Plagiarise
Fraud is discouraged by the community and may result in the account being Blacklisted.