in this post im going to discuss the strategy that i will use to get to 1000 rating with minimal usage of capture rate.

this strategy relies on Yodin Zaku as your main summoner and Obsidian as my secondary summoner with the help of furious chicken and Creeping Ooze.

First off i am gonna start as 0 rating novice rank

this is my 1st battle of gaining ratings

to kick things off

there is just 1 rule in early stages of the ratings just do as much damage as fast as possible with given mana.

i always start to pick 0 mana cards and then ant miner after picking the summoner yodin.

because ant miner has the scavenger ability which benefits from dead cards, increasing his HP by 1 everytime someone dies

also its great to make the most of monster slots to be filled as much as possible dividing cards even more to lower mana ones if your looking to take the ant miner strategy with low mana battles in the early stages.

as much as possible while picking ranged monsters and any monster to pair up with yodin zaku as your summoner look for the snipe ability, its a great way to spread the damage among your enemy cards for maximum damage efficiency. 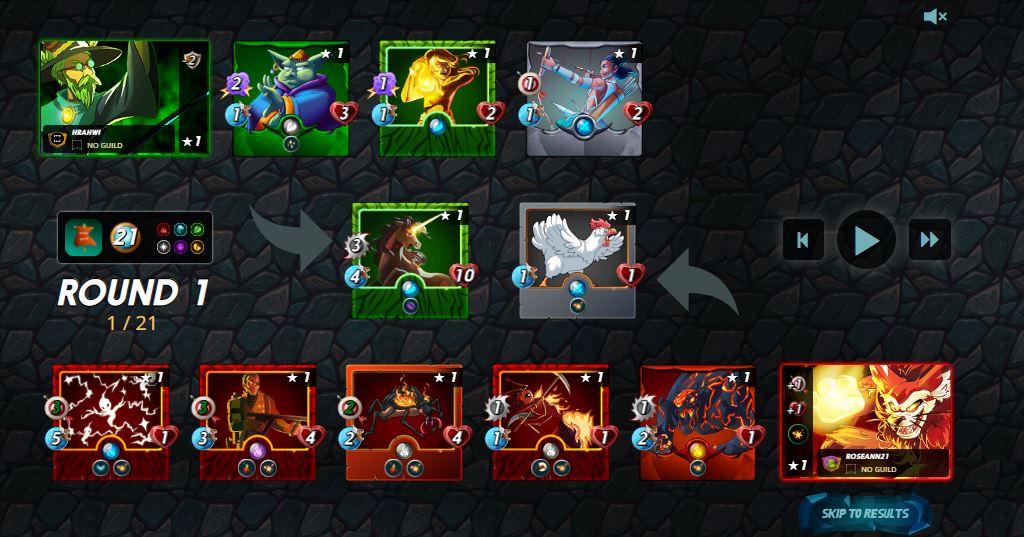 in my second novice battle i've applied double 0 mana with ant miner combo because of the low mana given.

filling up the remaining mana with ranged monster with snipe ability and spark pixie to avoid sneak attack.

also if you can afford to get a flying monster for your backline id recommend it because of the flying ability the enemy has a 25% chance to miss their physical attack on your monster.

which explains why im always getting flying monsters for my backline at most.

this time in my third battle in novice rank because of the high mana given i've used cerberus as my tanker he is the substitute for ant miner because he has heal ability for the cost of only 4 mana.

in high mana battles you apply the rule of dmg must exceed 10 before magic dmg because for sure the enemy will use a tanker that will exceed that hp.

in this case my enemy used unicorn mustang as i expected it hp is morethan 10 but i still have it covered with my total damage of 14 before magic dmg.

why do i emphasize on making damage before magic?

because magic damage is easy to counter and most player/bots tend to do so, a few are able to counter ranged attacks but those few are very few indeed as shown in this battle incidentally the unicorn mustang is present which counters magic dmg which solidified my claims.

also as shown here i used the spark pixies once again for my backline you can never be too careful of sneak attacks, its better safe than sorry after all.

in bronze league there are 2 must have in every battle.

with this in mind i assure you more battles won than lost.

this is my 1st battle as bronze rank for this journey.

i have applied the 2 must have in every battle as usual with the mana of 17 rules 1 and 2 should be taken.

rule 1 can you survive sneak ability.

in this case i put the flying monster in the back so i have some evasion to sneak chances.

I have used tusk the wide which has the void ability worked really well in this battle cause he has life leech magic monster.

notice my usage of 0 mana cards you basically use them as some sort of shield to give your ranged attackers more chance to attack, should your main tanker die as the need arises.

also from picking between spark pixie and impbowman + goblin fireballer as my attacker if your wondering why spark pixie is not picked, because spark pixie is 4 mana with the damage of 3, hence when you divided her with 2 cards like i did it gives 4 damage with the same amount of mana and also increases the team survivability.

because when pixie as a single card is hit she is done for and having 2 hitters are always better than 1.

see in low mana battles you have to maximize your mana usage to the fullest to ensure an absolute victory. 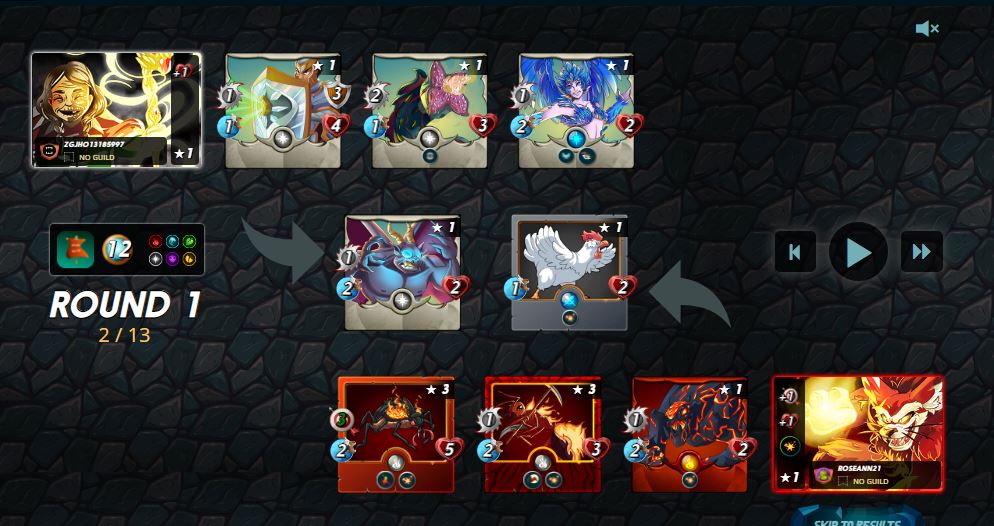 in my 2nd battle the mana is very low with 12 only so the standard is to apply the first rule can you survive sneak.

surviving sneak ability, there is a specific card for that in fire type since i've researched this throughly from my previous battles the fire beetle is the best for this 12 mana battles simply because he has 5 hp total when with yodin zaku as a summoner and the 3 damage is also critical for this low mana battle.

the enemy this time around as expected my enemy used sneak ability and maximized his mana usage as much as i did with so little mana.

i applied the double 0 mana card with antminer because this is simply the best tanker you can get at this type of low mana battle basically the hp your enemy had to go through before reaching the ranged card is 6 with a couple of deaths it will go up to 9 by the time he will reach ant miner and 9 hp is not very easy to kill in low mana battles.

you may want to check that battle and watch, as how the ant miner is easily the best tanker for this particular mana when executing my strategy ant miner became 9 hp and went bananas LOL. 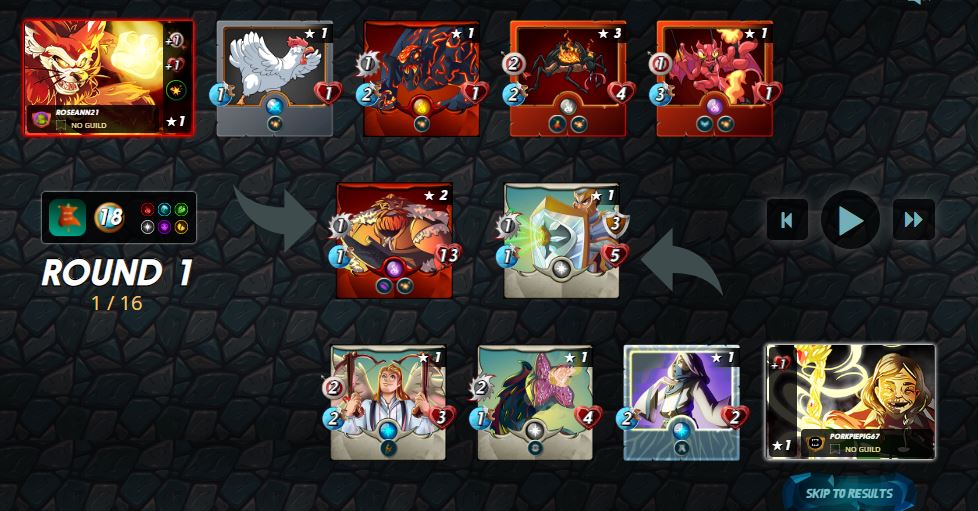 with the usual i just hit em up with the imp bowman with flying ability as the mana is low at 18 i cannot afford spark pixie, if you watch this battle you will see how the flying ability helps counter the sneak attack because he missed twice and never had the chance to kill my backline monster.

have an antimagic atleast 1

and the main strategy of this yodin zaku take up a snipe monster when you can, the highest damage possible without ruling out those 2 rules which the fire beetle fall into upon this categorizing.

also utilizing 0 mana cards as shields to become a backup tanker incase the main tanker dies so your ranged attackers can do more damage all the while.

so far after some battles 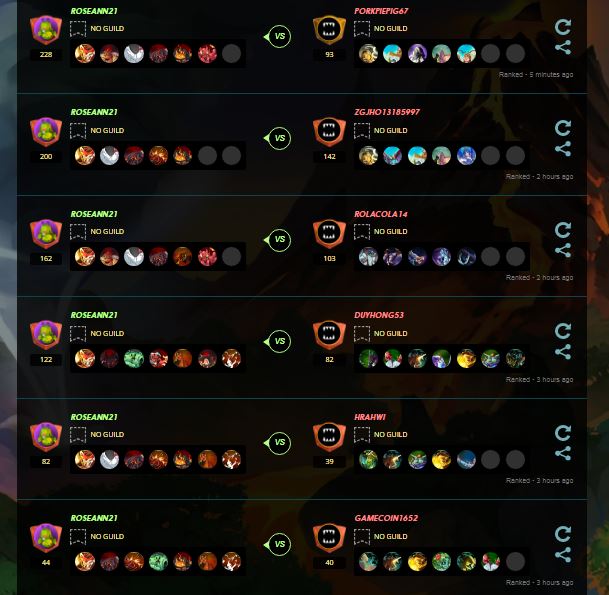 with a perfect score we are hoping to continue this streak and go quickly at 1000 rating without losing much capture rate.

as you all know sometimes rng just favor some lucky guys so even if you have some antisneak monster with the form of flying.

it just got taken down in a single hit with a low chance and you lose a game unfortunately.

incase there is no fire splinter

upon using the earth splinter you just use the combination of unicorn mustang and wood nymph this combination is hard to beat actually.

that combo given above is the staple of earth line up since your using obsidian as your summoner you will have to go all in on magic all the way as how i have picked my monsters.

in this battle the rule is blast from which you need to do the most dmg as fast as possible by making my team almost all magic and the combination of good combo with wood nymph, unicorn mustang and a little magic negation from mushroom seer.

also you have to keep in mind as the earth splinter is open almost all people silver and below tend to use magic so makesure to not forget antimagic dmg card like i did triple down on anti magic cards namely, unicorn mustang, failed summoner and mushroom seer.

this is the particular reason you have to rent those 2 cards (wood nymph and mushroom seer) in addition to the fire monsters as a need like this arise your better prepared not just a one trick fire splinter.

herein is a cool little trick that i will share with you in the ruleset opportunity (the monster with the lowest health are to be the target of a monster that is not in the 1st position) even melee can attack from anywhere.

thus giving the opportunity to use grum flameblade and make him go bananas crazy like real strong.

you need a kind of tanker on the front like cerberus as i have done here, then you bust out grum putting him in the back, make it sure to spend all the left little mana you have left spreading the targets to low hp cards like i did.

because in the particular rule of opportunity you dont need to protect yourself from sneak attack and worry about magic attacks, thus what you need is fill out all monster slots full and have a single tanky hitter or multiple if possible and your set for a victory.

the last battle to 1000 rating

now this is the last battle before i achieve 1000 rating in a small amount of capture rate.

breaking down this battle ive checked the recent battles of him, he seem not to lean towards magic and diversify his tactics to healing and repairing armor so i put up a strategy that will beat him up fast by maximizing my damage output thus giving him no time to heal or repair and allied armor.

i just applied the 1st rule of a must have in this battle.

being prepared for a sneak attack by having a flying monster in the back side of my team which worked great in this case.

with my dmg output being 11 before the magic dmg i easily killed his tanker and win this game.

so my capture rate went down to 63%

i gained a little DEC up to 7.

but this is a needed preparation for my daily grind now this account is ready to grind up to silver 1 and get 8 pcs chest after getting my capture rate to 100%.

i said 8 pcs chest because your supposed to open your chest only from having it cooldown 24 hrs prior and refresh it making you do the quest 2x and get 8 pcs quest chest i shall cover this topic indepth on my post about grinding up to silver rank using 400 - 450 dec.

I won 40 battles out of 51 I had which is an ok percentage getting out of bronze league.

there was some opponents with overwhelming cards along the way, but they are just few, and most of my opponents were bots with same name along the way so i beat them with my standard way of battling.

which is the 2 must have in every battles in bronze.

Thank you for reading my guide and i hope you learned the strategy indicated in my guide.

Congratulations @xphantoms! You have completed the following achievement on the Hive blockchain and have been rewarded with new badge(s):