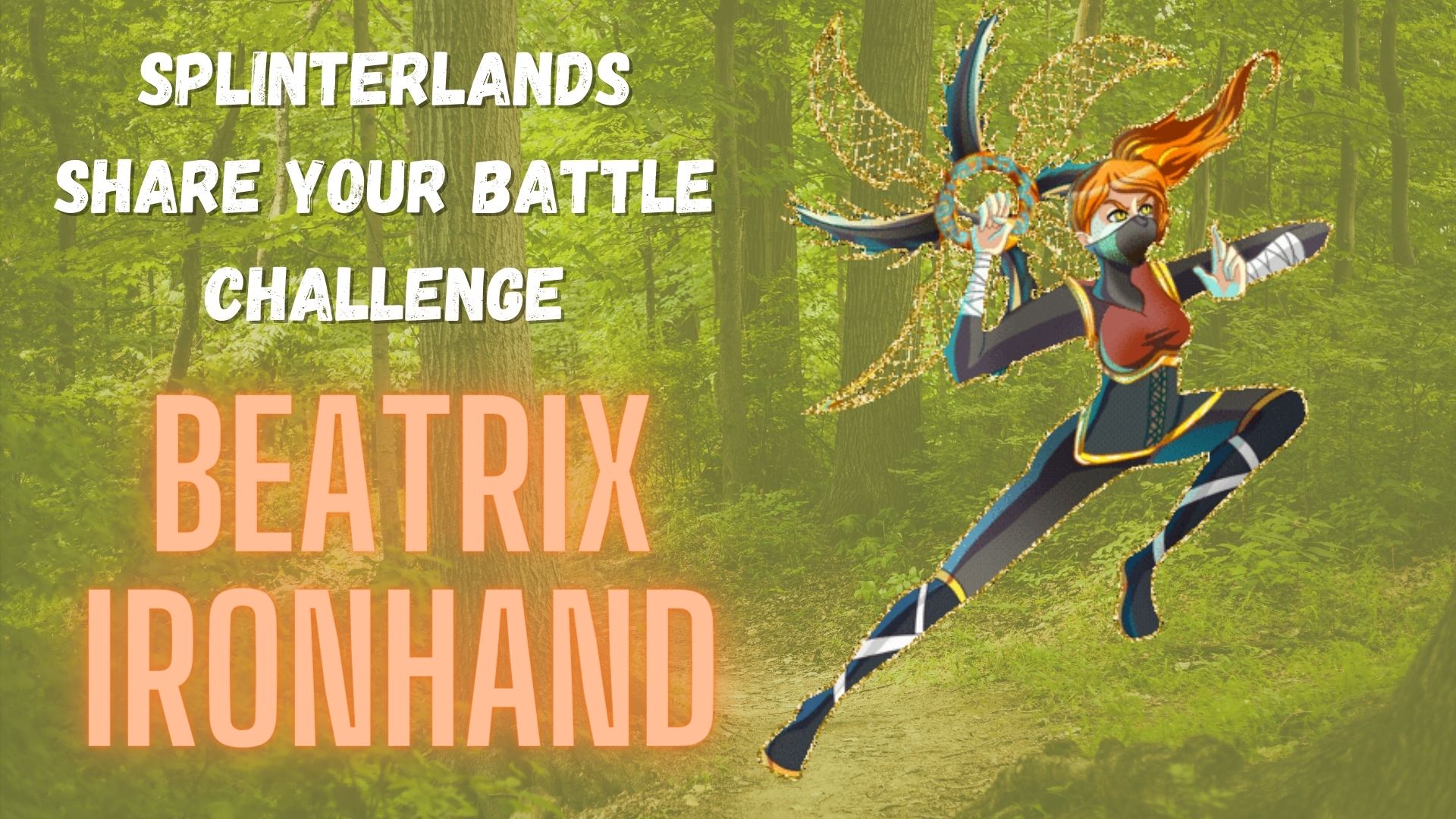 For this week's @splinterlands Share Your Battle Challenge I got to use a favorite card from a favorite splinter, Beatrix Ironhand. Beatrix Ironhand is an incredibly versatile card from the Earth Splinter. I used her in this battle at level 1 and she's already formidible at this level with a 2 ranged attack, 4 speed, and 5 health. She's fast, and can take a hit.

What really makes her shine, however is her abilities. At level 1, she has Close Range allowing her to use her ranged boomerang attack even in the first position. This makes positioning her very easy. At level 3 she gains one of my favorite dirty tricks in the game, Thorns which allows her to deal some extra damage to any melee attacker trying some shenanigans. At level 5 she gains another dirty trick with Cripple, reducing the max health of any monster she hits.

All in all, she's one of the most fun and versatile cards in Earth Splinter, even at low levels. And for 6 mana, she's an automatic choice for high mana battles, and worth considering for medium mana battles.

Let's Talk About The Battle

The Ruleset for this battle was normal rules, with all splinters available and 23 mana. I opted for a somewhat unorthodox approach to using this card.

I had been getting trounced by fast teams with healing, and decided I wanted no more of that. So, instead of choosing an Earth summoner, I chose Drake of Arnak from the Dragon Splinter to give me +1 armor for some staying power. I also wanted some versatility with card selection, and access to one of my favorite Dragon splinter cards to back up Beatrix.

For my tank, I used Diamond Dragon. I wanted to take advantage of Beatrix's speed, while also slowing my opponent. Diamond Dragon is a heck of a tank with Drake of Arnok's +1 armor and the Flight ability. So long as my opponent didn't field much magic users, I figured I'd be fine.

Beatrix Ironhand came second so she could still effectively deal damage should the dragon fall. This is where her Close Range ability would have been useful.

Child of the Forest was my third postion, chosen as another fast ranged attacker. They don't deal much damage, but they can whittle away at the back row very well.

Furious Chicken was cannon fodder in the last position.

I knew my damage output was not going to be great, but I was hoping the Dragon and the Chicken would buy me just enough time to chew up my opponent. 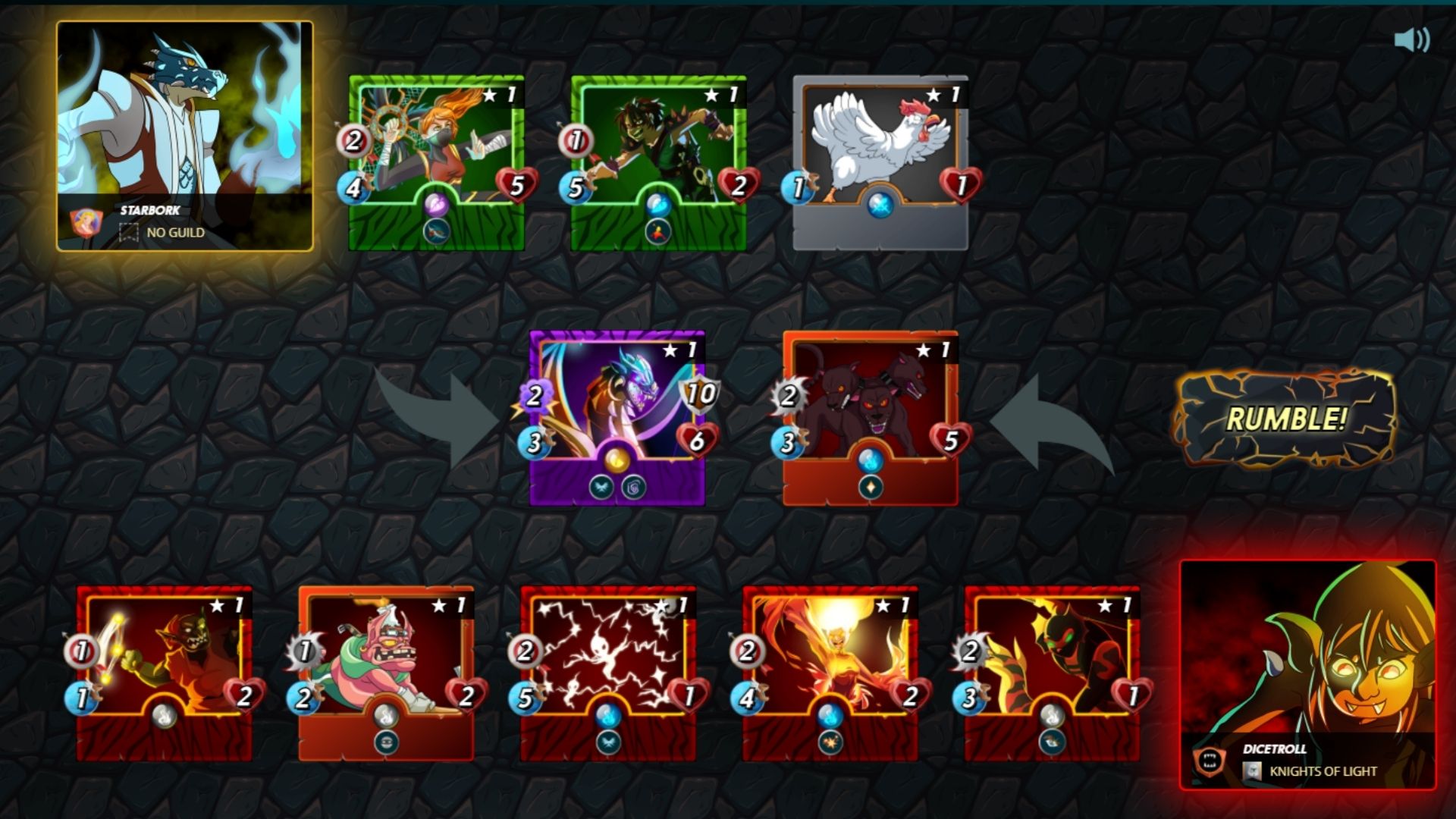 My opponent fielded the exact type of team that had been beating me lately. Fast. Lots of damage output. And Cerberus as a healing tank. Outlasting them was the plan as I slowly reduced their damage output. I was a little worried at first with just how much damage they could potentially do with 10 total damage per round potential to my 5. Generally speaking, they were faster, too. The fact that they used Pyre to boost the speed of their attacks even further didn't help my chances.

But, the Dragon did it's job, handling all of the incoming melee and ranged attacks well with its armor. The Chicken also bought me necessary time.

Once Cerberus was dealt with, and the Fire Elemental was down, it was easy sailing. But those two cards are fantastic Fire Splinter cards that constantly vex me, so I was a little worried.

In the end, my ranged attackers were able to slowly pick apart my opponent from safely behind the Diamond Dragon.

Here's the link to the battle so you can watch it yourself! 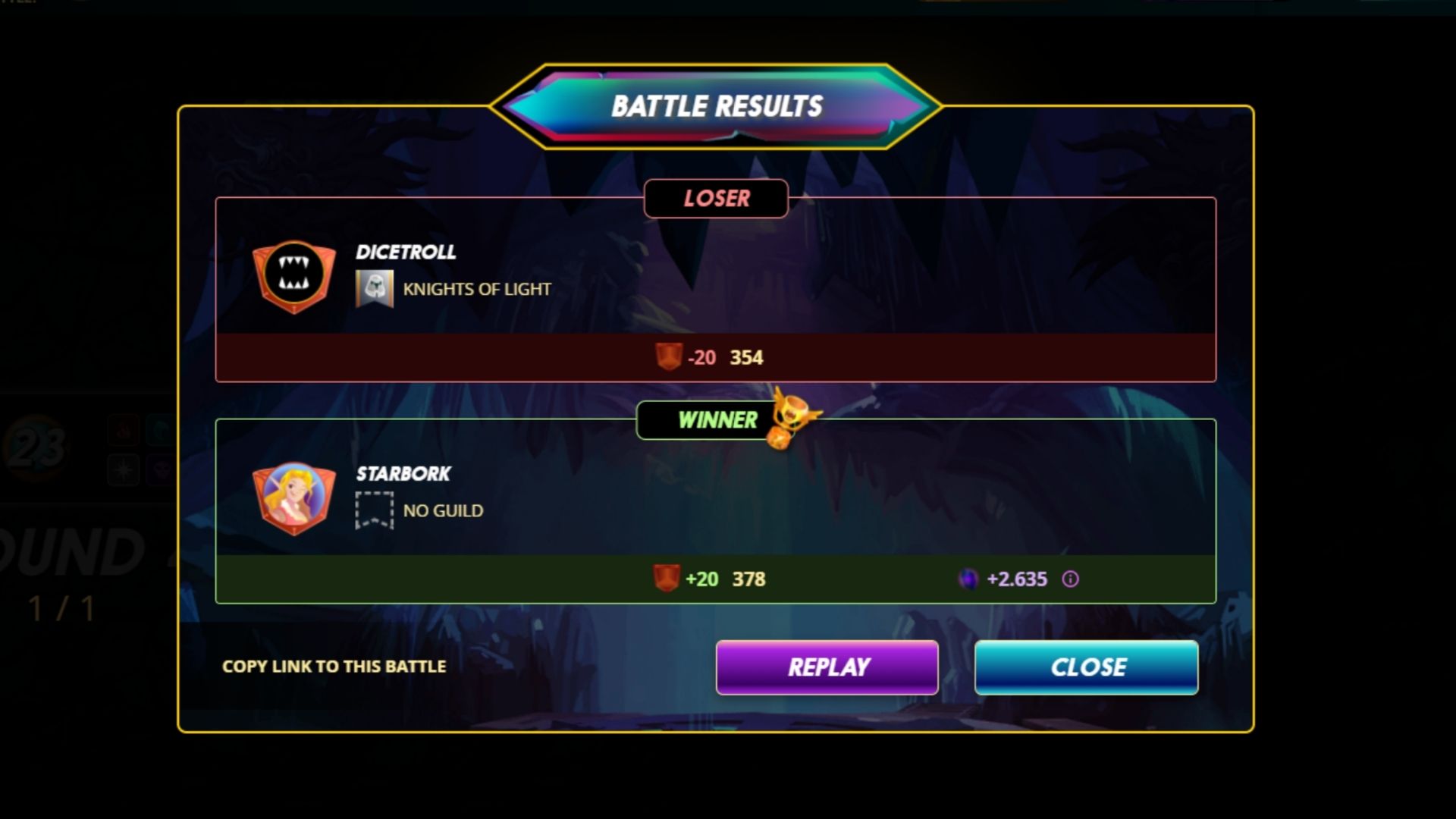 This past week I've noticed a lot of new players coming in to the game. There's many new names among my opponents. Many of these new players are doing really well, and are forcing more competition and a higher level of play.

New players and new challenges along with these Weekly Battle Challenges force us to look at favorite cards in different contexts, and get better as players.

I'll continue to lean on Beatrix Ironhand in battles where I can pay the mana cost to use her. She's just too versatile, especially now that things are really heating up in Splinterlands!

If you're not already a Splinterlands player, NOW is the time to start. Join the fun today!