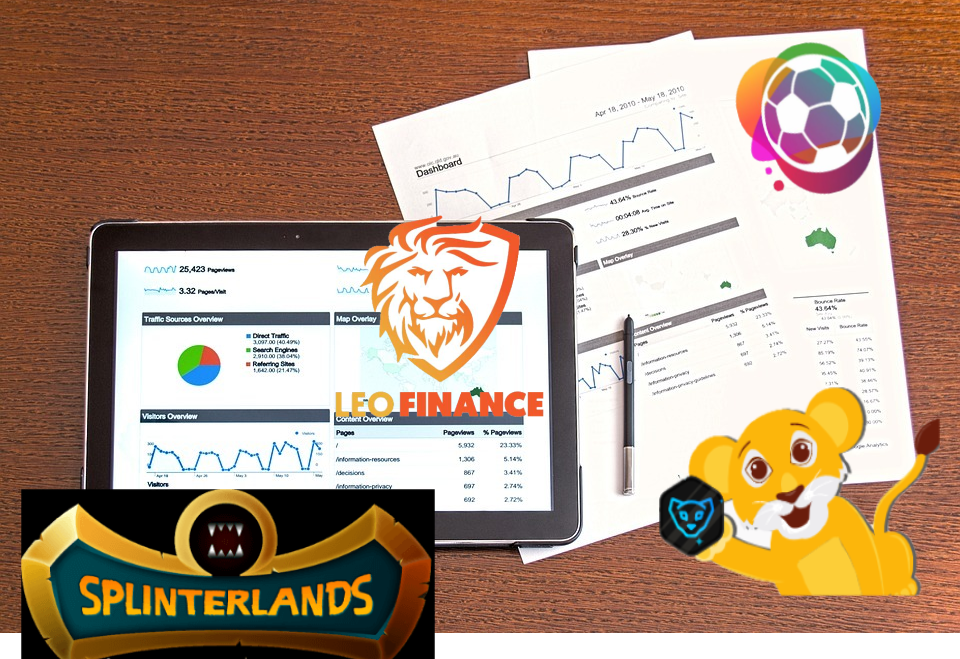 The price of Leo token has been on the wrong side of 50 cents for a while now, and in that time, I have taken the opportunity to throw more weight at the project. As I've said on numerous occasions, my long-term target is to break into the first page in the Leo rich list and my medium term target is to have a Leo vote of 1 Leo per vote.

To achieve my target, I recently powered up slightly more than 600 Leo tokens to get my total vested stake to 5072 Leo Power. This has been delegated to my Leo curation account and will be used to sustain my life.

At the time of writing, my total Leo holding has taken me to the third page of Leo holders. Despite being on the third page, I am still a long way off the mark, as the least amount of Leo I need to break into that part of the woods is 15k leo power.

I am still very much in "accumulation" mood, so I will definitely be making more purchases with any idle money I find laying around.

More Cubs in the Kingdom

Speaking of idle money, I had to pull out some money that I had laying in exchanges to reinvest into Cubs. I have held on to those coins for a while, waiting for a monumental pump but that's not been forthcoming.

The funds in my exchange wallet are for a specific purpose but instead of just leaving them there to rot, I decided to use it for a higher purpose by reinvesting a part of it into Cubs. So other than my mined cub from the Cub/BUSD pool, I also made a strategic market buy that has already been profitable in isolation.

I threw it into the kingdoms of course and I'll leave them there for the foreseeable future. In a weird plot twist, Cake has not been doing quite well but at least it earns me Cubs that will inevitably find their way into Kingdoms when they're matured.

I got into Splinterlands with the help of a few awesome people that I met online. These guys gave me everything I needed to get a head start in the game and I like to think I took advantage of the opportunity.

Unfortunately, I always knew this day will come but often struggled with the thought of these awesome cards getting pulled away. Alas, such is the case with a number of cards that were delegated to me and have been with me throughout my journey in the Splinterlands.

The baby wheels were slowly being taken off by my benefactor, and now, they're completely off. I have to be a big boy now and contend with only my cards. This dropped my collection power to 287,300, and down to Diamond 3.

For what it is worth, I am very impressed by my development over the years. I took a step back from Diamond 2 but at least I can be proud that I am not a self-sustainable Splinterlands brawler. I'm grateful for the help I got because without it, my growth wouldn't have been at this pace.

Speaking of sustainable development and keeping with the theme of Hive games, I have also been doing fairly well in my Rabona quest. It feels good to know that I have finally settled down in League 1, and now I am ambitious about moving up the ladder.

My ambition to climb up the ladder has been stifled by the stiff competition in that neck of the woods. I also need to vary my tactics from time to time, rather than stick with my 4-3-3 formation. On a positive note, my team is getting stronger and I have been able to sustain it through paying large salaries and scouting.

My wage bill is already over 120k RBN but my generated revenue over the season still put me 15million RBN in profit. This extra fund will be reinvested into the squad and should boost my chances of breaking into the top 5 in league 1. It is ambitious, to say the least, because there are many others that are doing far better than me in that same league.

That won't stop me though, as I continue to participate in the game. The new season starts in a few hours and at the time of writing, I have already renewed the contract of a superb goalkeeper. A few more additions at that goalie's level and we just might bully our way to the top. Fingers crossed.

I've been busy as always both in the market and on the chain. I try to keep my decision-making simple and participate in things that I can keep track of.

I am not a trader, so idle money doesn't sit well with me. I prefer staking and earning dividends that can then be reinvested into other projects. As far as Cub is concerned though, I will be sticking around for the long haul and will keep compounding until I have reached a point where I can use the profit to get the hell out of this country.

I love the fact that I can just set it and leave it in the kingdoms, would be checking back perhaps monthly, I need to know how to look away for long, and if I need to do anything it'll perhaps be just to add more stuff....it will be interesting if all the kingdoms can have the auto compounding effect, maybe optional...

Idle money is never good unless you are waiting to buy something :P

I have around 200$ stuck in Stocks which I want to get out at, but can't at the moment. When I can, I think I will drop those 200$ into the Cubs Kingdom :D

Do it as soon as possible. Cub price will rise very soon

Well. I would need to get a job before I can do that :p According to the state xD

Ye, its stupid xD
But if I sell it now, they just minus it for my benefits, so it wouldn't make sense for me to sell atm xD

Here take some SPT and get Splintershards (SPS) governance token airdrops daily for one year for holding them.

Unlike me I don't like keeping money idle, depositing it in bank give me low or 0 interest so I choose to invest my money where it will yield benefit for me.
The bearish trend affected price to go down which gave me opportunity to acquire reasonable coin and hold on for interest.