A Closer Look Into Splintertalk.io (SPT)

@costanza 72
about 1 year ago
LeoFinance

Some of the Tribe Tokens on the Hive Blockchain are getting more interesting as of late. Today, I am taking a closer look at Splintertalk.io and it's native SPT Token...

*** This Post is mostly Written to promote Splinterlands and Splintertalk on other Crypto Blogging Platforms...

Last week, I wrote about Leofinance.io and the LEO Miners (See Post). I started to buy some on a daily basis from that point on. I didn't get very far and only managed to accumulating 170 of them (around ~55$) as the entire supply that was left got bought up at some point. At least I managed to pick some up and I will be monitoring the passive returns they bring about in my monthly Passive Crypto Earnings Report posts.

More of the projects that run on Hive-Engine which is the 2nd layer of the Hive Blockchain are starting to show some fundamental value instead of the usual "buy tokens to get more tokens" Ponzi Scheme. They remain high-risk and won't make anyone rich but they are a nice opportunity to earn a little bit extra and a fun way to invest/speculate. SPT is one of them...

This splintertalk.io website displays all Splinterlands related posts from hive.blog that uses one or more of these tags ( splinterlands | spt | steemmonsters ). So everyone that is interested in just Splinterlands content and wants an easy way to interact with the community can use this site to read, make posts, or make comments. It also bundles all your own Splinterlands posts on one central page.

What is the SPT Token

So SPT is the native token of the Splintertalk tribe which means posts will get rewarded with SPT tokens in a similar (broken) way Hive Upvotes work. If you stake SPT (It takes 4 weeks to unstake), your 10 daily 100% upvotes will be worth more. half of the post value goes to the content creators and half flows back to the curators depending on the time window of the vote where early voters earn more curation if the post ends up getting popular (at least that's how I understand it. While this model was designed in a way to get the 'best' content on top, the past couple of years clearly has shown that this doesn't necessarily is the case.

Some of the problems of manual curation for Splitertalk is that upvotes conflict with Hive upvotes and other tribe upvotes like Leo or Sports. So if you want to give a Splinterlands upvote you will automatically also give a Hive upvote. This makes it almost impossible not to get screwed over on curation rewards or voting power even when using a multiplier (for example x10 where 10% hive upvote gives a 100% SPT upvote). Also, the time it takes to manually curate is something nobody really has. Until this point, I always just kept the SPT I earned and never really bothered with curation since it was simply not worth it.

@monster-curator is offering a great solution in a way where you can delegate your Staked SPT to them, they do all the manual curation making sure the good stuff gets on the splintertalk trending page. 100% of the curation rewards are shared between delegators making it possible to earn some passive SPT on your holdings. See their
latest post for more info! 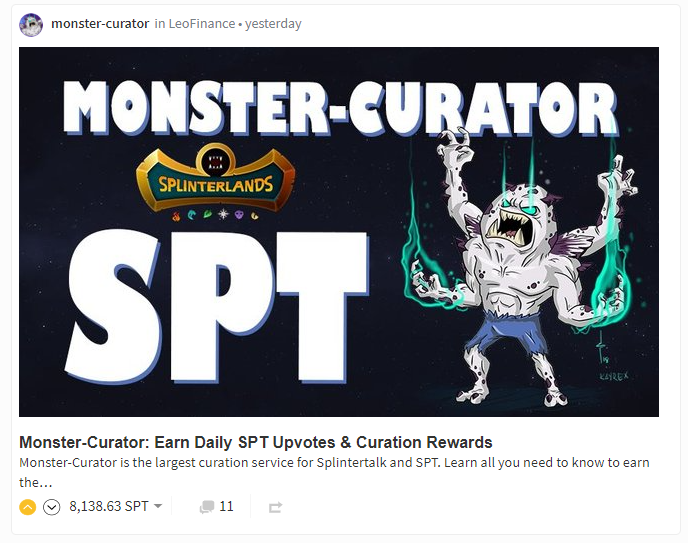 Use Case & Value of SPT

The token itself has (will have) 2 main use cases. 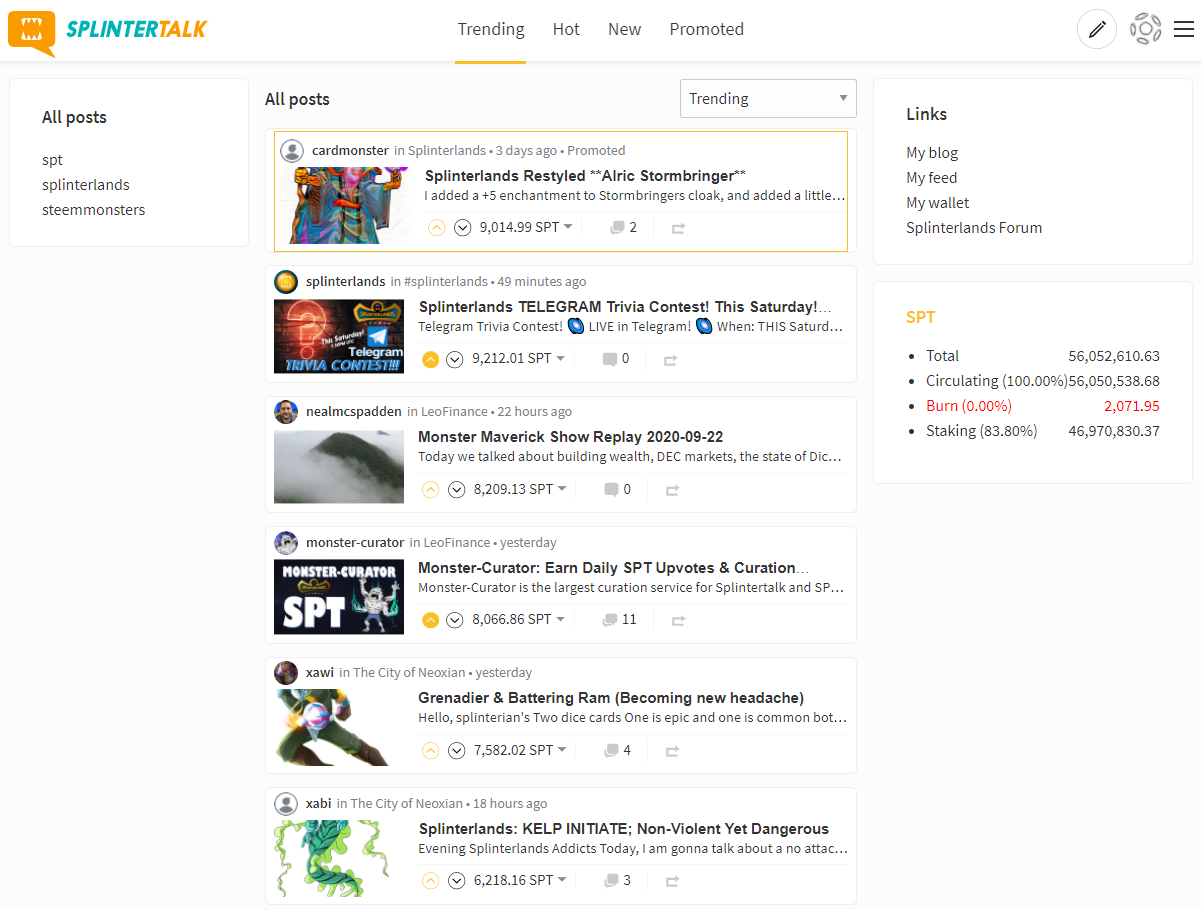 This pretty much makes SPT a sleeper coin right now until the moment it will actually be implemented. 1 SPT currently goes for around 0.00020$ and it has a total circulating supply of 56 Million giving it a market cap of around $11000. It has very little trading volume at the moment with 10.44$ in the last 24h.

SPT is a nice little token that mostly adds some fun to the table. It won't make anyone rich but for me, it's one of those coins to hold on to and maybe buy a small stack worth ~50$ at current prices in anticipation for what is about to come. I am holding on to all SPT I am earning for sure and am at ~36k SPT worth around 7.2$ at the moment.

A lot will depend on how widely adopted the Splinterlands game can become but a 10k Marketcap for the SPT token currently feels rather small going by how popular 'worthless skins' are in games like Counter-Strike or Fortnite. Right now it feels like a good time to play Splinterlands, earn some SPT by also getting engaged with blogging if that is your thing, and hold on to what you get delegating it out to @monster-curator for some passive earnings. 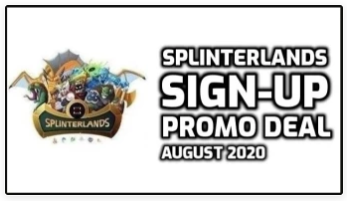 I continue to offer a win-win deal to everyone who tries out the game using my Referral Linkand from what I have seen, this is the most favorable way for any new player to sign up at this moment. Right now, this deal really helps to increase new players their collection score to at least around 5000 which allows for Bronze 1 rewards. See Full Sign-Up Deal. To see what can be expected in terms of earnings from the Splinterlands game, check my monthly earnings reports (SPT Earnings are not included). The numbers will likely go down with the new reward restriction implementations that started this month.

Fantastic post about SPT, the best I have seen so far. And not just because you mention us. 😉

I noticed the price spiked with their latest announcement, nice review! It kind of escaped my attention that there was a new interface!

Excellent article all around.

Your explanations are clear and concise.

I love that @monster-curator is doing the curation initiative to help spread the love while SPT potentially grows.

I was looking to know about SPT today, Now I got an idea since its price was increased almost double