After just listening to the most recent AMA (Link) it very much feels like we are now in full Euphoria Phase for Splinterlands with everything looking extremely good. This will be my personal aproach going forward.

So nothing but good news from the team with a lot of new partners joining and an upcoming SPS (Splinterlands Governance) Token (which went for 0.018$ in the private sale from what I picked up). Card values are at an all-time high and the Land sold out with the Untamed Packs close to being sold out plus many new updates on the horizon.

Where I was in full accumulation almost exactly a year ago (See Reasons I'm Buying More Cards & DEC being greedy while others were fearful, right now it looks like it slowly starting to be time to start taking some profit. 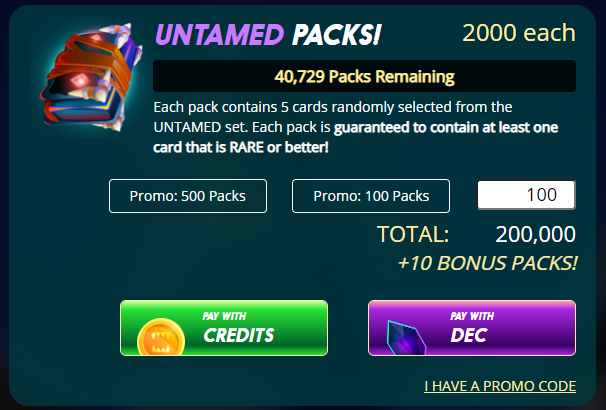 The chart of Total Splinterlands Market Cap is currently going parabolic with both the price of cards going up with more of them getting in circulation as the Untamed Packs are very close to being sold out (only 40k Packs left out of the original 1.5 Million). 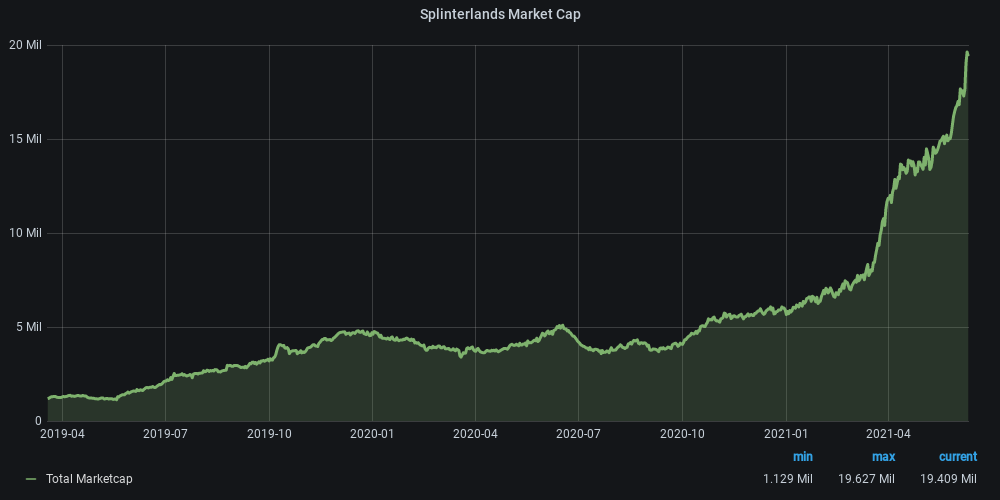 With at least 2 months in between the next Chaos Legion Set, new players will either have to buy cards directly from other players or buy packs from the secondary market. Looking how Beta Packs there now go for 10$+ now, it's easy to see how Untamed packs will go for 2$+

I have been saving Splinterlands Earnings with an eye to getting 100 (+10 Free) Chaos Legion Packs the moment they are released so I am part of the airdrop which goes out each time a certain number of packs got sold. Instead, I will now try the strategy to buy 100 (+10) Untamed packs trying to flip them for a small profit during the coming months in order to get the 100 (+10) Chaos Legion Packs at a cheaper overall expense. This will allow me to... 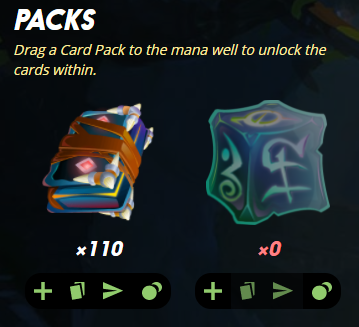 Just now, I paid 200$ in credits for 110 Untamed Packs (1.82$ a Pack) and will resist opening a single one of them. I'm sure more have been buying packs now that they are close to selling out to put them for sale for a slightly higher price. This is one of the main reasons why the last 100k packs (also in previous sets) fly out in no time and I would be surprised if there were Untamed Packs left at the end of this week.

I am also in the process of Selling individual duplicate cards that I accumulated at discount prices last year even though I will just hold on to my core collection of cards. I also keep the 12 Plots of land I currently own along with the totems and I'm looking to pick up some of the DICE Set Summoners in order to stay competitive once they introduce a ranked mode where old cards are no longer allowed to be played. I'm also glad I managed to accumulate SPT when that was well below 0.00025$ and will continue to accumulate those earnings until I reach at least 2 Million SPT. Each SPT counts toward 0.25 Points for the SPS Airdrop and I still see them as quite cheap at this moment.

Is Splinterlands Still Worth Getting Into ?
Both The teams and the game has seen nice growth these past months to the point that an overall increased value is justified. The golden times to cheaply accumulate seem to be a thing of the past though and new players will have to go about it a lot smarter getting smaller overall returns. If I would give advice a version of myself who was not yet in the game now, I honestly would say not to bother mostly because purely as a game right the influence of pure skill is way too small for my liking. The 20$-50$ monthly earnings that quite easily could be gotten from the game without investing too much in the short run also would not be worth the time it takes.

By the end of writing this post, the available Untamed Packs are already down to 35k (from 40.7k) so things won't last all too long. I will continue to bring regular posts and updates on the game with my personal view on things along with the actions I'm taking...

I've heard a lot about the Splinterlands game, how can I join and play... Hope there is trial mode.

yes, you can make an account (or log in with your existing Hive account) and try it out for free. In order to unlock rewards and more you'll have to pay 10$ for the summoner's Spellbook. I'm still offering a sign-up deal so if you make sure to use my Referral Link the first time you log in so your are sure to get extra cards if you ever end up playing for rewards.

Land sure did sell fast.

I do think at least the final stage is mostly people buying it in anticipation of being able to sell it for more later on. It's the same reason I bought 100 (+10) packs and not much later they all sold out.

I agree, I bought 110 early on and still have most of them. Most my cards come from the BETA collection or REWARDS collection. I'll likely sell the UNTAMED packs I have.

I have no idea that buying a tract vs buying 1000 untamed booster pack is good idea or not.

I really did not expected land to sold out first.

Anyway ,now I am confused ,should I sell them at 2500 DEC each and maximize airdrop of SPS, or keep it for a year and may get chance to sell at $5 to $10 each.

If we knew we would all be millionaires :)
I'm mainly betting on untamed packs not going below 1.82$ on Hive-Engine which at least will give me my money back and give a 6% or 8% discount on the Chaos Legion Packs I intend to buy as Guild discounts only count for DEC purchases.

Yup, that didn't last long and I'm glad I was in time. Pretty much the same scenario as Alpha and Beta packs, once they are close to being sold out a lot of fomo kicks in and 'investors' start buying them all up with an eye to make a profit.

I think it's high time I get it into this Splinterlands game. Seem to be missing out on a lot of things

I think it's worth it, after all there's a whole new collection of cards coming, we're looking forward to seeing